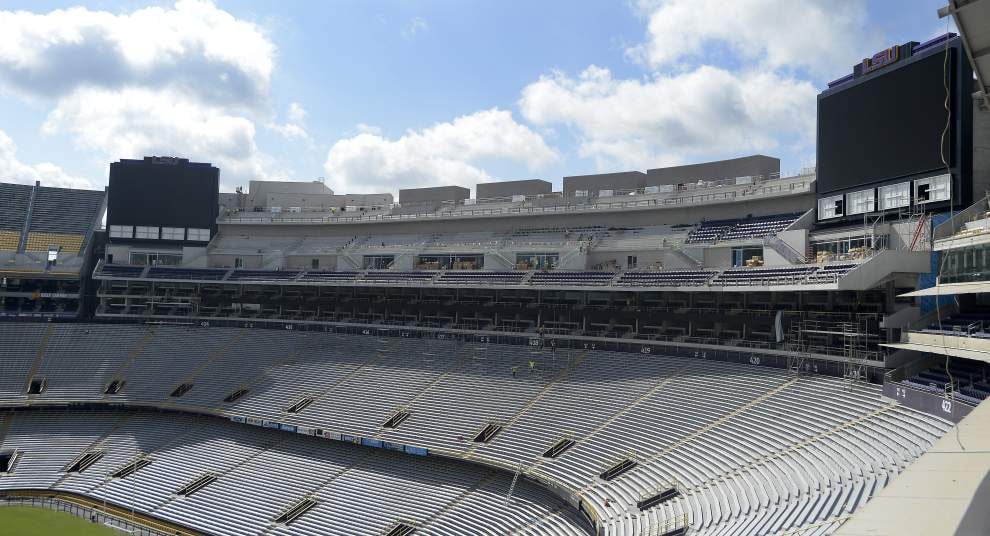 The top most section of Tiger Stadium's south end zone is being turned into a premium seating area. 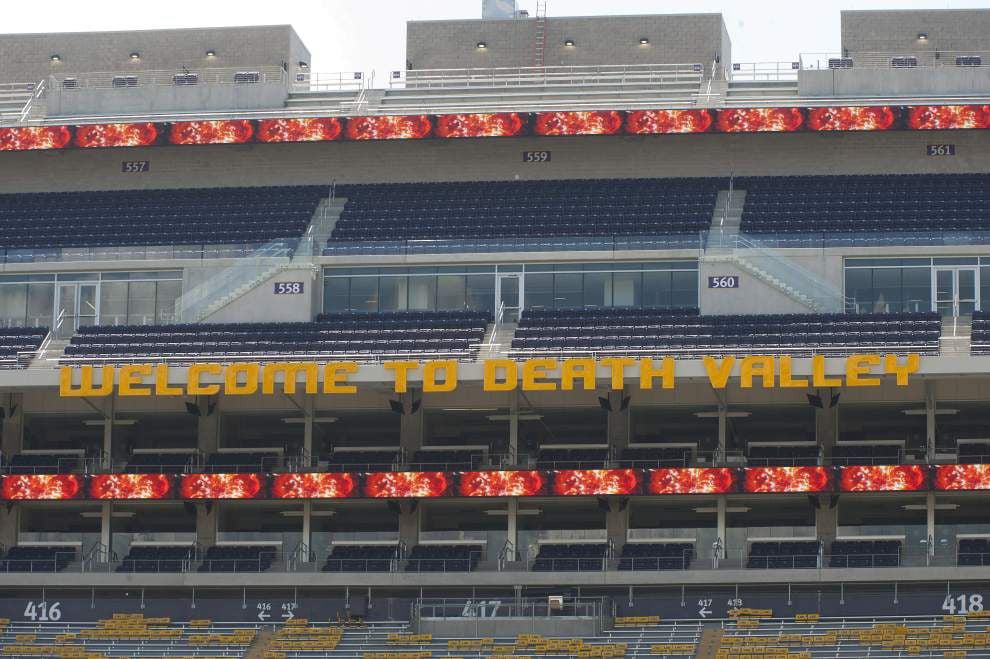 The metal bleachers above the stadium club's purple chair-back seats are now part of the Skyline Club.

The top most section of Tiger Stadium's south end zone is being turned into a premium seating area.

The metal bleachers above the stadium club's purple chair-back seats are now part of the Skyline Club.

Beer and wine are coming to the top reaches of Tiger Stadium.

The university is turning the south end zone upper seating area into a premium space, allowing ticket holders in that section to purchase beer and wine. LSU is dubbing the new section the “Skyline Club," an outdoor-only premium area that opens this season.

"That’s the unique part about it: You're outdoors, in Tiger Stadium, enjoying the game," said Eddie Nunez, LSU's deputy director of athletics overseeing projects. "It's going to be pretty cool."

Prices for Skyline Club tickets will range between $45 and $120, depending on the game. Ticket holders have access to an all-you-can-eat special menu that’s included in the price of the ticket. Additional menu items, including beer and wine, will be available at an additional cost.

“We are excited to be able to offer this new concept in Tiger Stadium to our fans,” LSU athletic director Joe Alleva said in a statement. “The new Skyline Club will provide an affordable club-level experience for fans, while also giving us an opportunity to continue to enhance and provide unique ways to entertain them.”

The school plans to erect tents for ticket holders to eat and drink in shade behind the uncovered Skyline Club seating, about five to seven rows of metal bleachers situated above the Stadium Club's purple chair-back seats. Skyline Club ticket holders have access to two concession stands, but several satellite concessions will serve beer and wine, Nunez said.

Aramark, a Philadelphia-based concession company that entered into a 10-year contract with LSU this summer, has been working on this project for several weeks, Nunez said. The school is hoping to partner with local restaurants to expand food menus for those seated in the Skyline Club.

How We Voted: Our preseason AP top 25 college football ballot is released

For the fourth year in a row, The Advocate's Ross Dellenger is one of 60 national sports rep…

The creation of the club comes at an interesting time in college athletics. Stadiums, arenas and even ballparks are moving toward a seating model that includes more premium areas — an effort to entice fans to attend games.

The sticking point for LSU is a Southeastern Conference policy prohibiting alcohol sales in general seating areas. Sales are allowed in premium spaces only. The policy has been a much-debated topic over the years, specifically between LSU and the SEC office.

Alleva has lobbied for stadium-wide beer sales. He says it will provide schools with expanded revenue streams, could help increase attendance and could make fans less likely to drink heavily before entering games.

LSU has allowed alcohol sales in its premium seating of the football and baseball stadiums for years. The school added more premium seating areas (Stadium Club) during the south end zone expansion of Tiger Stadium in 2014.

The school also plans to add premium club seating to the Pete Maravich Assembly Center, and it may at some point create a sports bar of sorts on the ground level of the south end zone, Alleva said this summer.

Change is coming to LSU's defense, in the form of the 'monsters' on the edge

They call themselves the Bs. Or the Bucks.

The sale of beer and wine is spreading quickly throughout college football.

About 40 schools offered beer, at least, to the general public last year, and the NCAA allowed beer to be served at the College World Series last summer. Alcohol is sold at most bowl games and College Football Playoff events, including bowls tied to the SEC — like the Sugar and Outback.

Ohio State plans to serve beer and wine stadium-wide this season, and Texas made $1.8 million in its first year of selling alcohol stadium-wide in 2015.

The basis for the SEC’s alcohol policy is public safety, commissioner Greg Sankey said. It’s “drawing a line,” he said, between those with “large quantities” of alcohol and football players, some of them underage.

“There are some imperfections with that policy,” he said in April, “and that’s why it continues to be a point of conversation.”

ALBUQUERQUE, N.M. (AP) — A special recipe designed to appease even the most snobby of craft beer drinkers.

Late in the first quarter of LSU’s win over Texas A&M in November, Drake Davis raced downfield on the kickoff coverage team, sought the Ag…

Here's your one-stop shop for all the LSU football storylines as the Tigers approach their season-opener vs. BYU.

LSU has agreed to stop mandatory pat-downs at the student section entrance to Tiger Stadium this football season, according to an LSU student …

Ed Orgeron won’t be the only Cajun playing a prominent role at LSU football games this season.

A fix for flagging attendance at LSU, other SEC stadiums? 'Beer would help,' Alleva says

How does SEC, LSU solve their attendance issues? Well, it's complicated...

Soon, a guy in Oxford, Mississippi, will hit the “send” button on an email with more recipients than there are people in Baton Rouge.