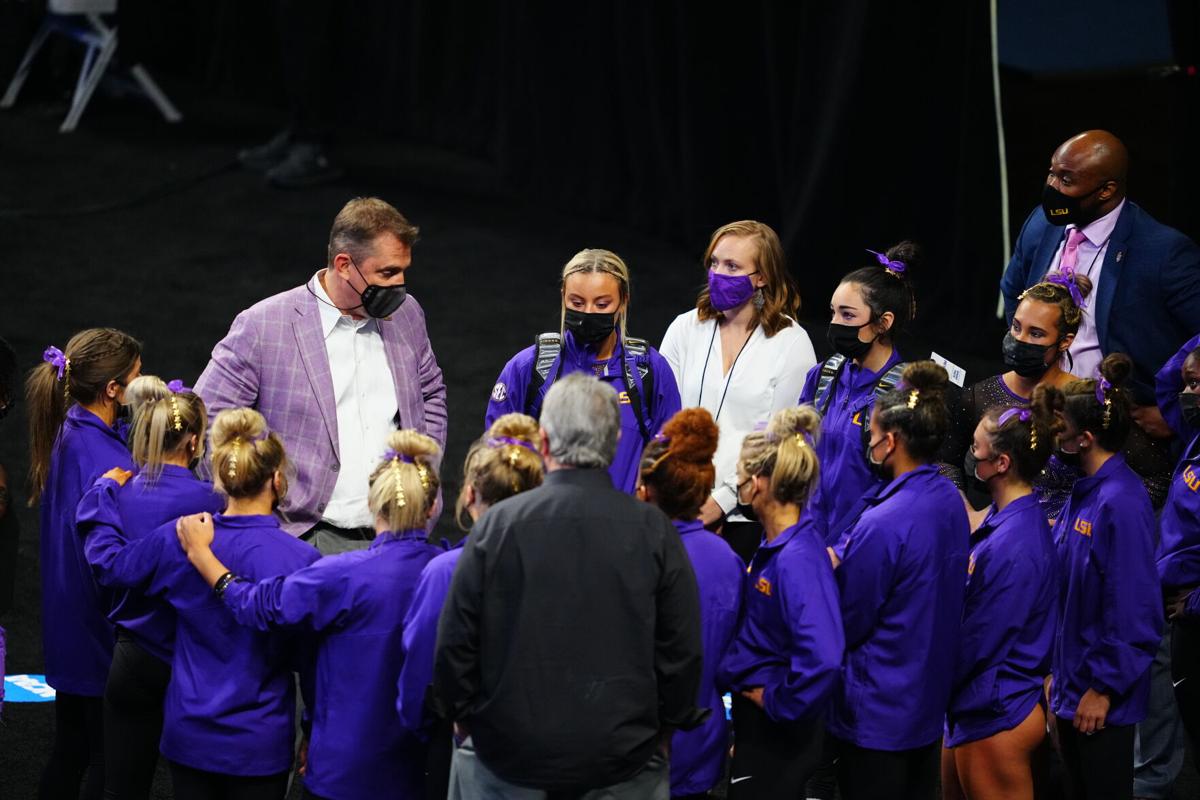 LSU coach Jay Clark, left, huddles with his gymnasts after their sixth-place finish in the NCAA championship semifinals. The Tigers' final score was 197.5625, not enough to advance out of their semifinal session to the finals. 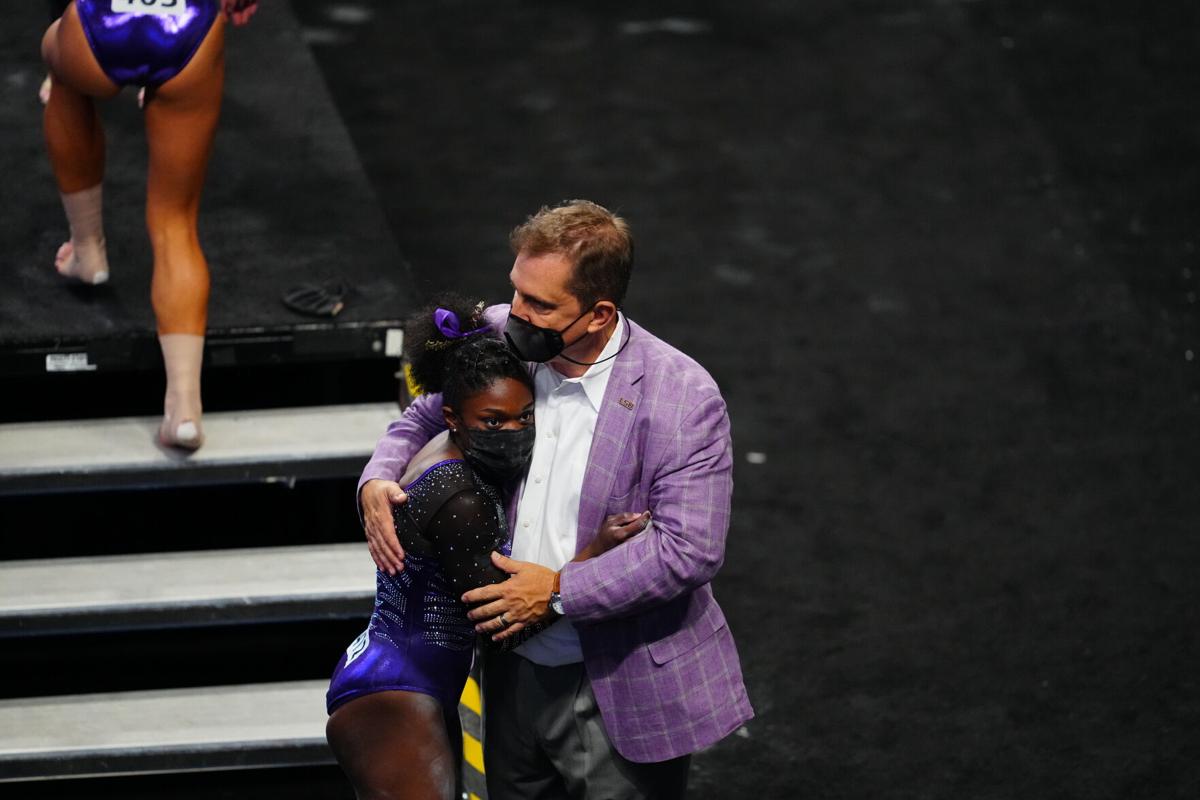 LSU coach Jay Clark hugs sophomore all-arounder Kiya Johnson during the NCAA championship semifinal. The Tigers finished in sixth place with a 197.5625 and did not advance to the final. 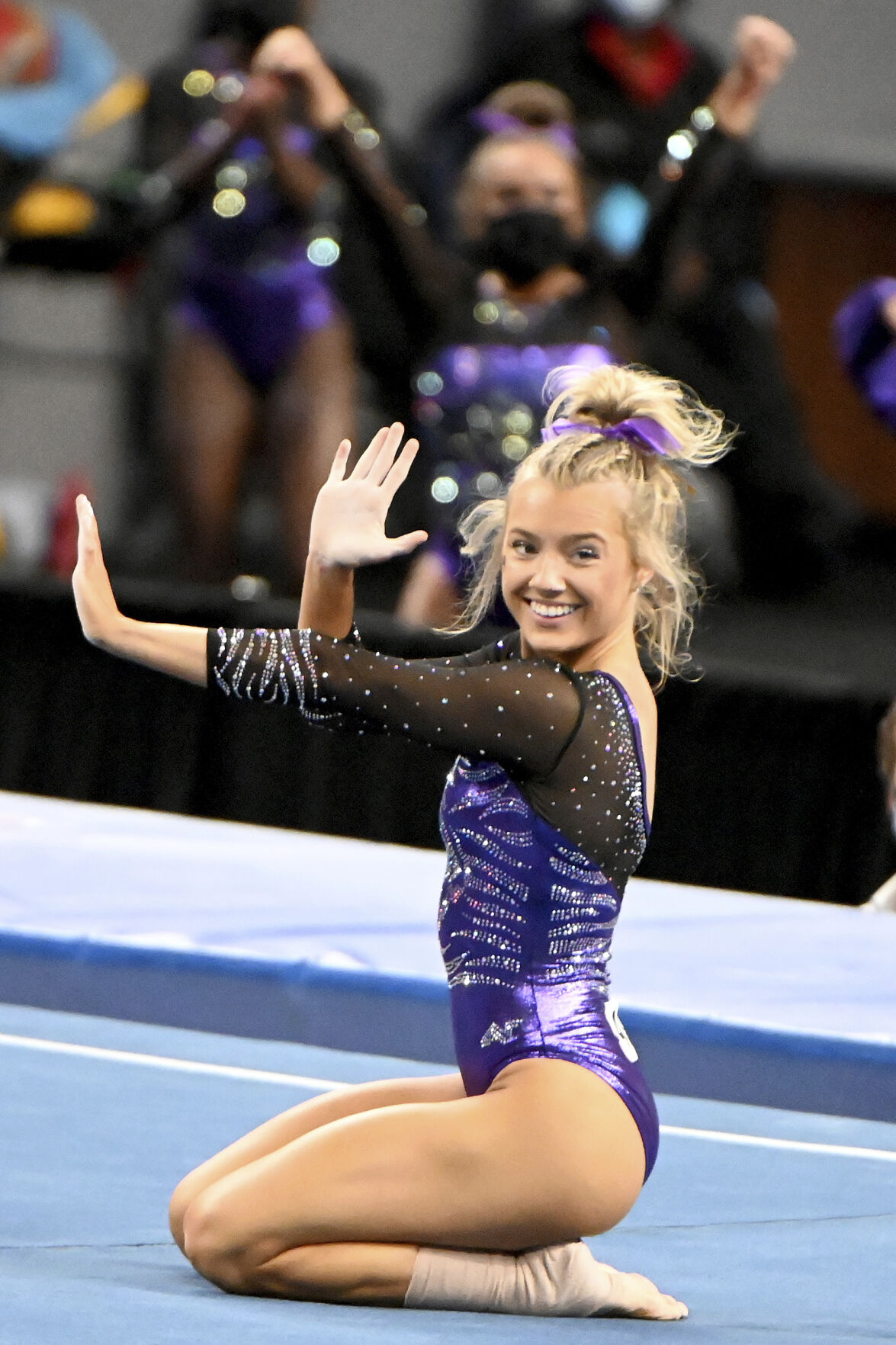 LSU coach Jay Clark, left, huddles with his gymnasts after their sixth-place finish in the NCAA championship semifinals. The Tigers' final score was 197.5625, not enough to advance out of their semifinal session to the finals.

LSU coach Jay Clark hugs sophomore all-arounder Kiya Johnson during the NCAA championship semifinal. The Tigers finished in sixth place with a 197.5625 and did not advance to the final.

FORT WORTH, Texas — In a disconsolate corner of Dickies Arena on Friday night, Jay Clark gathered his 2021 LSU gymnastics team around him for the final time.

For the gymnasts who will return in 2022, including potentially (though not likely) five of LSU’s six seniors, Clark wanted them to remember the pain of this moment. How they led after two rotations in NCAA Semifinal II and were solidly in front for the second transfer spot after three rotations into Saturday’s four-team NCAA final before it all melted away with a turbulent closing beam routine.

“Too much sub-par beam,” Clark said, his downcast mood inflecting his voice.

The Tigers finished last in their four-team semifinal behind Oklahoma, Utah and Alabama. Coupled with the first semifinal where Michigan and Florida advanced, LSU officially finished sixth in the country this year. LSU actually had a better score than Florida, 197.5625 to 197.4375, but that’s how the format works — top two from each semi advance.

That’s where LSU was in 2021. Very, very good, but not exceptional. In every matchup against a fellow national power, except the SEC meet when Florida imploded to finish a distant third, LSU came up short. Lost by a tenth to the Gators at home. Lost by a tenth to Alabama at SECs. Finished second in both semifinals of the NCAA Salt Lake City regional. Finished at the bottom of an NCAA final-caliber roster of teams in Friday’s semifinal.

This is why Clark wants them to remember how much Friday night hurt. Fuel for next year’s fire. A push back toward the top. To finishing the meet and reaching the NCAA final — and perhaps finally winning it all.

It is an easy default excuse to say a team was a young. But despite the fact LSU had six seniors (five of whom competed in 2021), this team was exactly that. Out of 288 routines this season, 108 were performed by LSU’s seniors (the lone junior, Rebecca D’Antonio, did not compete). LSU freshmen and sophomores performed 180 routines. And the 21 times LSU gymnasts competed in all four events as all-arounders, it was sophomores Kiya Johnson and Alyona Shchennikova and freshman Haleigh Bryant who did it.

With last year’s NCAA championships canceled during the pandemic, this was the first time LSU competed on this stage since the senior class of Sarah Finnegan, McKenna Kelley and Lexie Priessman departed after a runner-up finish in 2019. It showed in some nervousness and wobbles by the Tigers and little breakdowns that turned into big problems. Perhaps it will show in experience that allows LSU to excel in 2022.

“It’s not that we were not tough,” Johnson said. “I think sometimes we were our biggest competition. We would get in our own heads.

“When we figure out how to do gymnastics the way we know how, we know we’ll be good.”

There was much good to go around this season, too. Johnson had three perfect 10s on floor despite being held out of the event for half the year with an Achilles’ tendon issue. Bryant was arguably the nation’s best vaulter, sharing the SEC vault title with fellow freshman Elena Arenas and sharing the NCAA vault title Friday night with all-around champion Anastasia Webb of Oklahoma with a 9.975.

Bryant and LSU were so strong in their first two routines Friday on floor and vault, leading the semifinal at that point. But a hard and scary fall by senior anchor Sami Durante on uneven bars shook the Tigers as they headed to beam, gymnastics’ most difficult event.

It showed as LSU had only a 49.175 on beam with three sub-9.80 scores, opening the door for Utah to zoom past into the second transfer slot. It showed Bryant that the Tigers have to be more resilient in 2022.

“We have to stay focused the entire competition,” she said. “We can’t be amazing in three events and not focus to the end like we showed tonight.”

“We’ll get stronger,” Clark said. “There are great things ahead for these guys.”

Perhaps when they return to Dickies Arena for next year’s NCAA Championships, the Tigers will remember their dark and disappointed corner of the floor and vow never to visit there again.

FORT WORTH, Texas — Two brilliant rotations, led by an NCAA title-worthy vault performance from freshman Haleigh Bryant, had LSU on the cusp o…