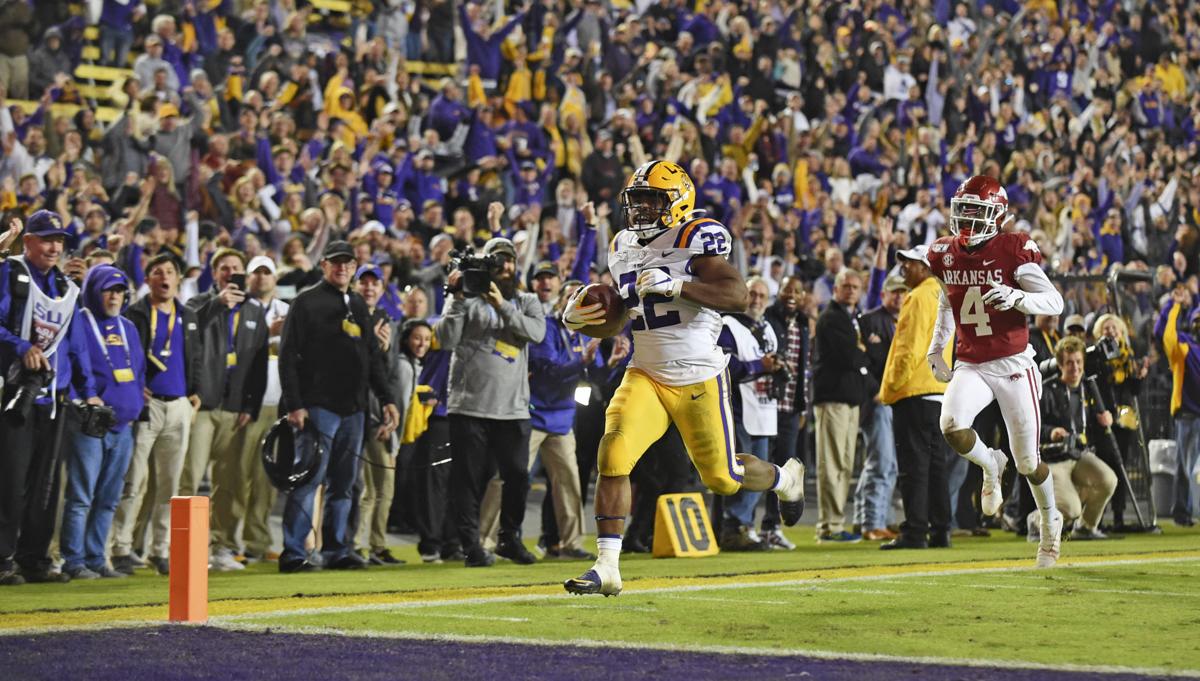 LSU running back Clyde Edwards-Helaire (22) sprints for the end zone to score past Arkansas defensive back Jarques McClellion (4) in the second half of the Tigers' 56-20 win over the Razorbacks, Saturday, November 23, 2019 at LSU's Tiger Stadium in Baton Rouge, La. 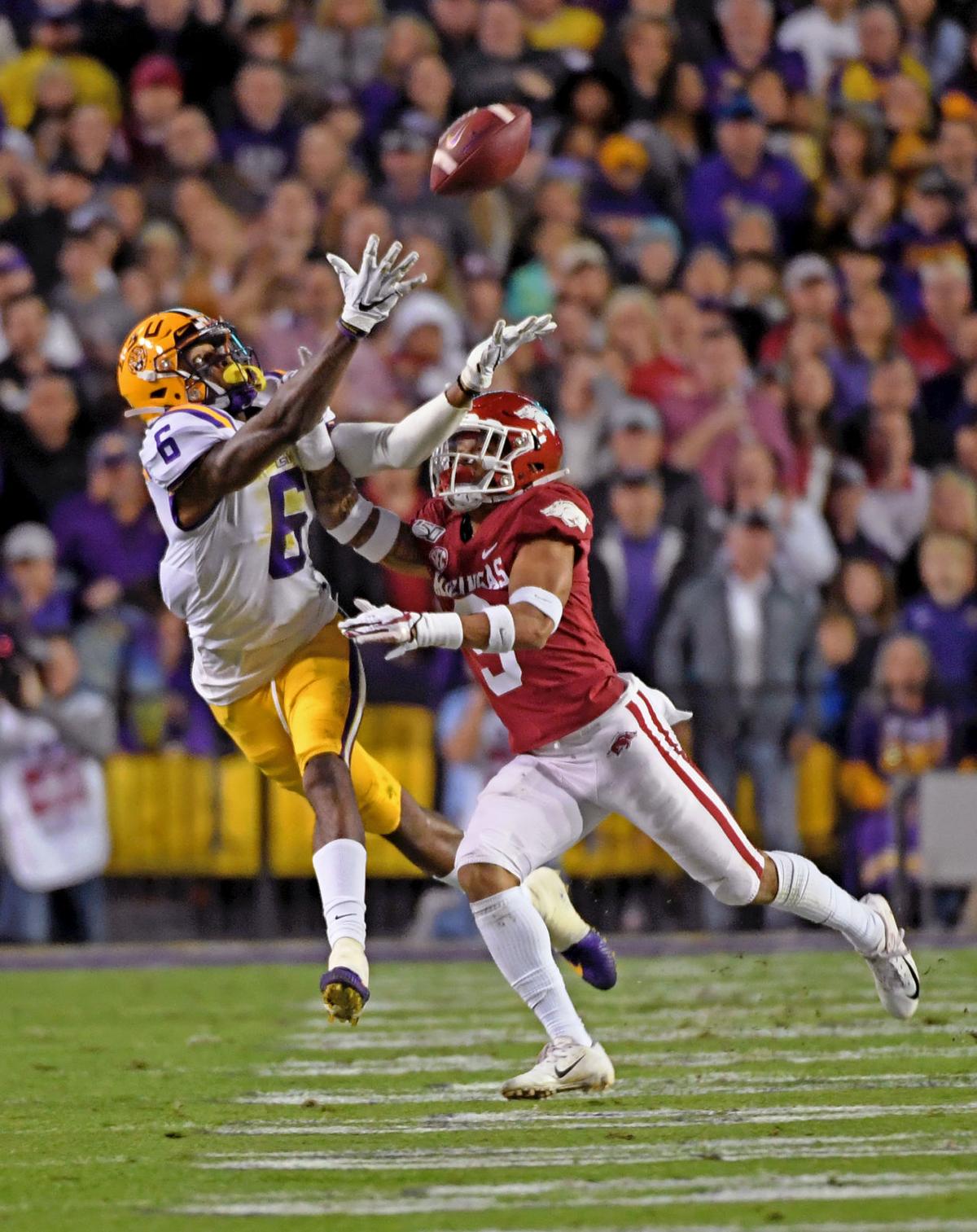 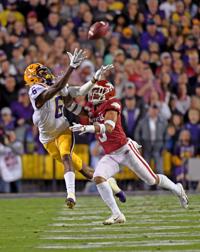 LSU wide receiver Terrace Marshall Jr. (6) looks for the pass as Arkansas defensive back Greg Brooks Jr. (9) defends during the first half of LSU's football game against Arkansas at Tiger Stadium on Saturday Nov. 23, 2019, in Baton Rouge, La. 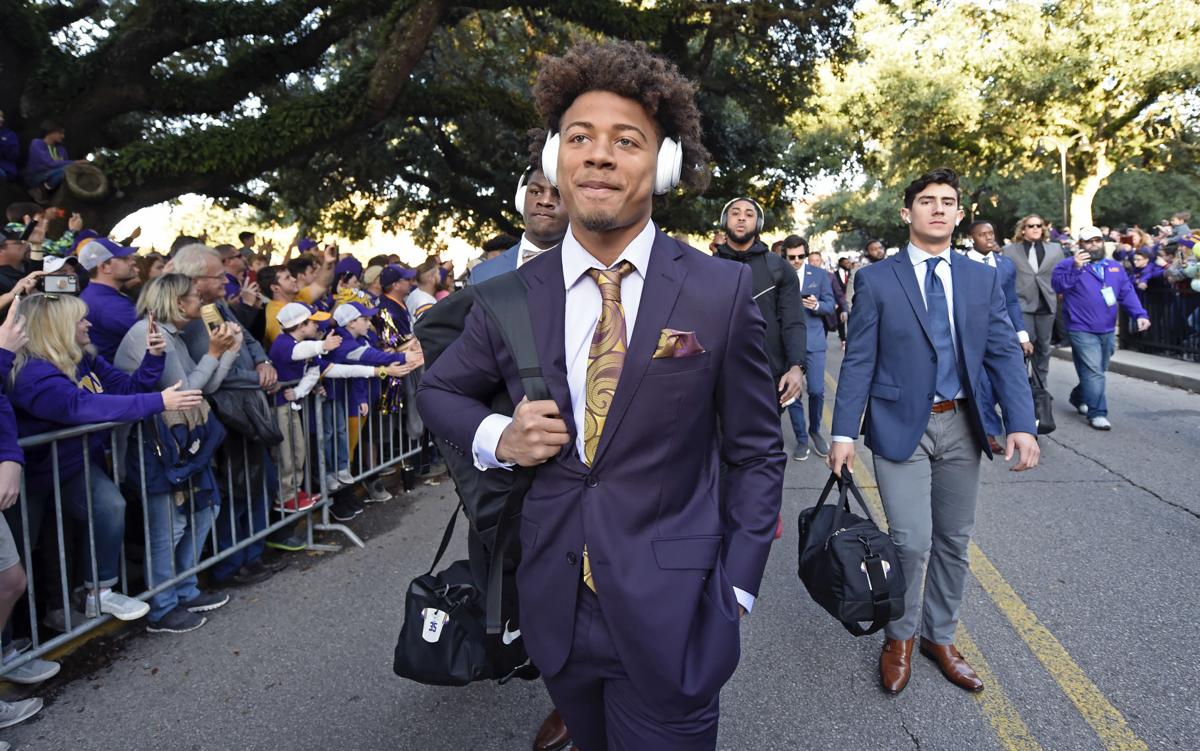 LSU running back Clyde Edwards-Helaire (22) sprints for the end zone to score past Arkansas defensive back Jarques McClellion (4) in the second half of the Tigers' 56-20 win over the Razorbacks, Saturday, November 23, 2019 at LSU's Tiger Stadium in Baton Rouge, La.

LSU wide receiver Terrace Marshall Jr. (6) looks for the pass as Arkansas defensive back Greg Brooks Jr. (9) defends during the first half of LSU's football game against Arkansas at Tiger Stadium on Saturday Nov. 23, 2019, in Baton Rouge, La.

As the college football season rushes to a typically frenzied close, it seems the superficial things become more important than blocking and tackling and running and catching.

The LSU Tigers lost face last Saturday at Ole Miss. Yes, LSU won the game, handily, 58-37. But there was little talk about the 714 yards from the Tigers’ Southeastern Conference-leading offense and much more frothing about the 614 yards they surrendered to the Rebels.

Clyde Edwards-Helaire stepped out of a tackle and strode the sideline for an 89-yard touchdown toward the padded gates of Tiger Stadium.

LSU stayed No. 1 in the polls and the CFP rankings, but were they really the best? Wasn’t Ohio State, blowing the doors off opponent after opponent against an inferior schedule to LSU’s really the better team? And wouldn’t the Buckeyes finally leap back to No. 1 with a win Saturday over No. 8 Penn State?

Ohio State did win again, beating Penn State 28-17 in an imperfect performance marred by a rash of fumbles that briefly left the Buckeyes vulnerable. What could LSU do to counter that by hosting Arkansas in a battleship-versus-pirogue looking mismatch with the woebegone Razorbacks?

For all the revolutionary talk of LSU’s offense this year and all the praise lavished on Joe Burrow, the Tigers were threatening to become a bit of a stale story. Everyone wants to be No. 1, but it gives everyone a clear line of sight at you once you reach the summit. Saying “LSU is really good” or “Joe Burrow looks like he’s going to win the Heisman” isn’t much fun for a lot of us media types anymore. The fresh angle is “Should Ohio State, or Clemson, be No. 1?” or “Who can win the Heisman if Burrow falters?”

So LSU needed a new narrative, a fresh splash against in such a lopsided looking game. After a slow start, the Tigers delivered.

There’s no way to measure these things, but it may have been the most historic two-play scoring drive in LSU history. On back-to-back plays in the third quarter, Clyde Edwards-Helaire ran for 35 yards to go over 1,000 yards rushing for the season and Joe Burrow went over 4,000 yards passing with a 50-yard scoring bomb to Ja’Marr Chase.

Yes. L-S-U. The school that used to struggle to throw for 200 yards a game because it was scrawling its plays on the walls of its prehistoric cave. LSU did something that Fun ‘N’ Gun Florida and Alabama and everyone else couldn’t do.

“The records we’re breaking this year, I don’t know if they’ll ever be broken again,” Burrow said. “This is a special team.”

Shaquille O'Neal was a great basketball player, but he may have missed his true calling as an LSU cheerleader.

The way the Tigers’ 56-20 victory ended may have been a bit of a downer — Arkansas got two fairly meaningless touchdowns once Burrow and Edwards-Helaire and most of LSU’s stars went to the bench — but it was an emphatic victory nonetheless.

Is it enough to win No. 1 in the CFP rankings once again? Who knows. But the Tigers don’t seem to be fretting about such things. They seem to grasp the simple but essential concept that if they just keep winning all the opinions and perceptions will take care of themselves.

“We’ve still got four games left,” Burrow said, a subtle but obvious reference to playing all the way to the Mercedes-Benz Superdome and the CFP title game.

As for the Burrow Heisman Express, well, it’s still on schedule to arrive in New York on Dec. 14. Joe headed to the bar car early in the third quarter, called for a martini with two olives (no, make that three olives) and admired his stats after throwing for 327 yards and three touchdowns on 23 of 28 passing. He also rushed for 24 yards, with no sacks and no interceptions.

As fearsome as Ohio State pass rusher Chase Young might be, and how excellent Buckeyes quarterback Justin Fields might be (he fumbled twice Saturday), Burrow didn’t lose any appreciable ground if any at all. If he keeps on this pace against Texas A&M and now Georgia in the SEC Championship Game, he will be impossible to beat.

“I think he already won it,” said safety JaCoby Stevens, who had three sacks in a brilliant third quarter. “I don’t think there’s a conversation.”

It only took minutes for the postgame conversation to turn to Texas A&M. LSU has been waiting a year to pay back the Aggies for that 74-72 seven-overtime loss in College Station that the Tigers felt was filled with wrongdoings from officiating to a postgame brawl. A&M and Georgia had a muddy tug of war in rainy Athens on Saturday, but the Aggies came up on the short end of a 19-13 score.

The Tigers, from their coach to their quarterback to, well, everybody, feel like they have a score to settle with their rival to the West.

So, revenge is on the post-Thanksgiving menu in Tiger Stadium. Somebody bring dessert.

It’s certainly something the Tigers prefer to focus on rather than eye tests. Style points. Committee groupthink.

After a week of taking potshots, apparently the Tigers did what they set out to do. A headline on ESPN.com read: “Burrow, Edwards-Helaire lead LSU to another dominating win."

Win the game and you get to write the narrative.

Big wins have become commonplace for LSU this season, but their victory over Arkansas helped the Tigers do something they hadn't since the 201…