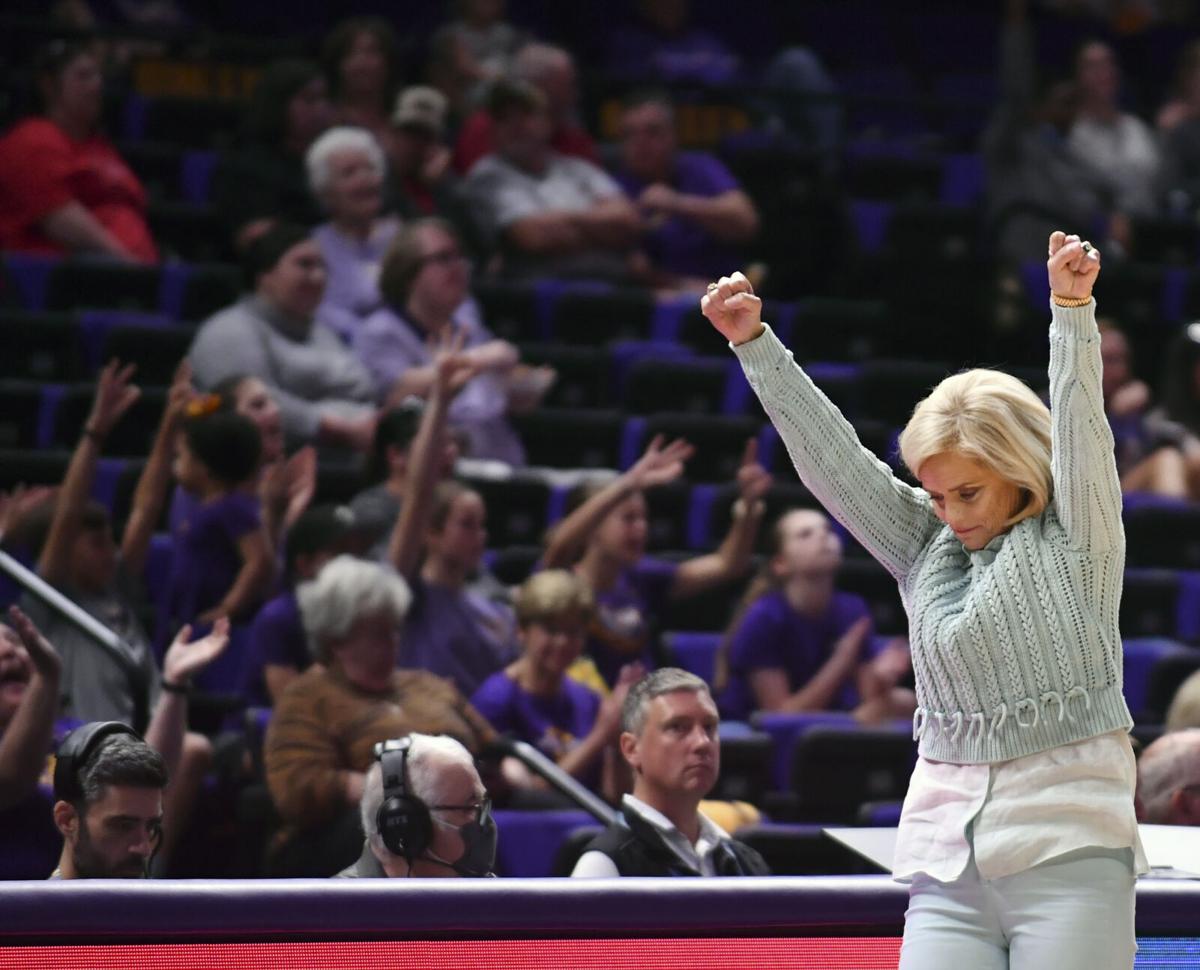 LSU coach Kim Mulkey celebrates a 3-pointer against Nicholls State on Tuesday, November 9, 2021, at the Pete Maravich Assembly Center. It was LSU's first game under the Hall of Fame coach. 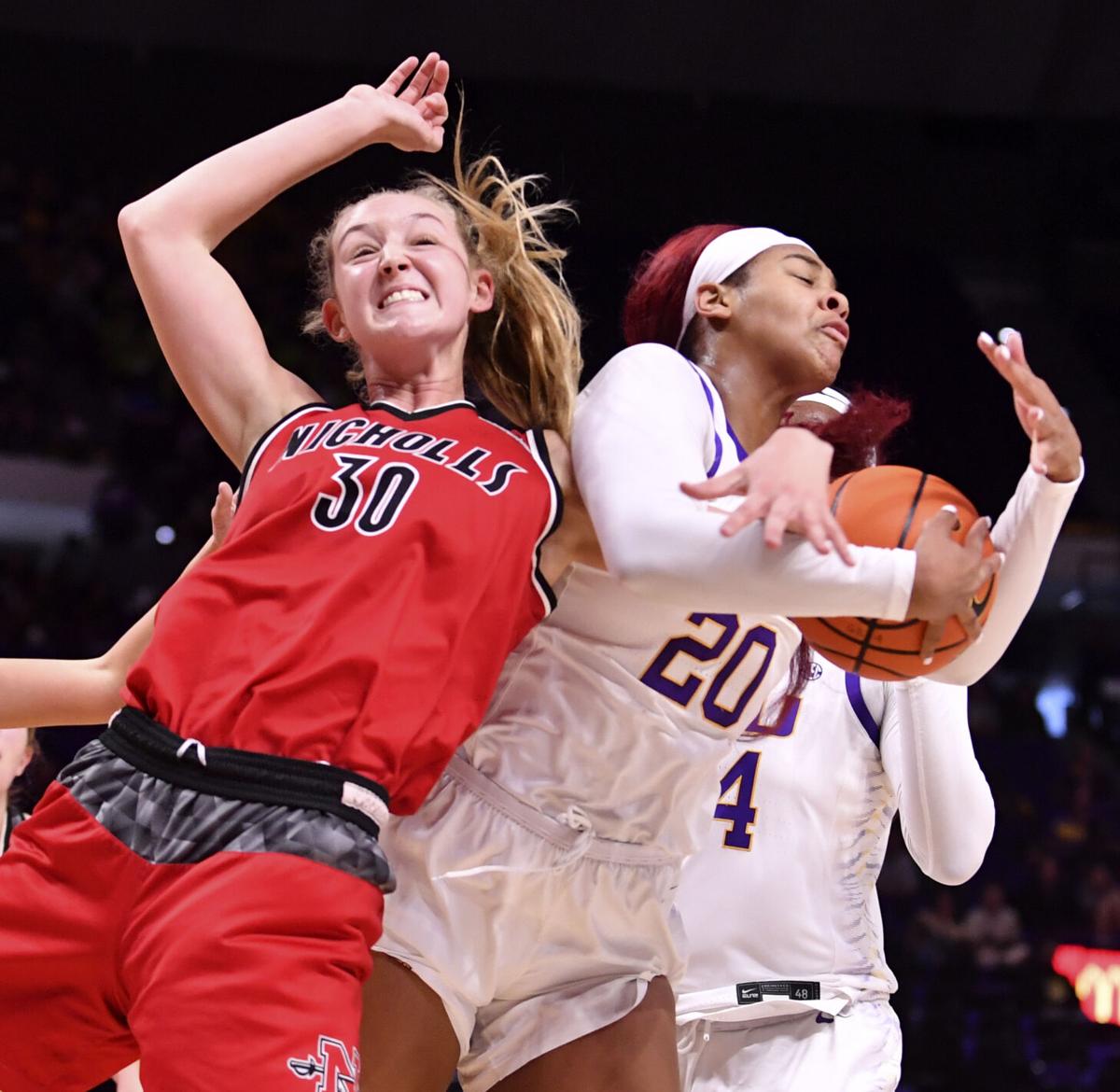 LSU center Hannah Gusters (20) pulls in the rebound away from Nicholls center Kate Manley (30) on Tuesday, November 9, 2021, at the Pete Maravich Assembly Center. 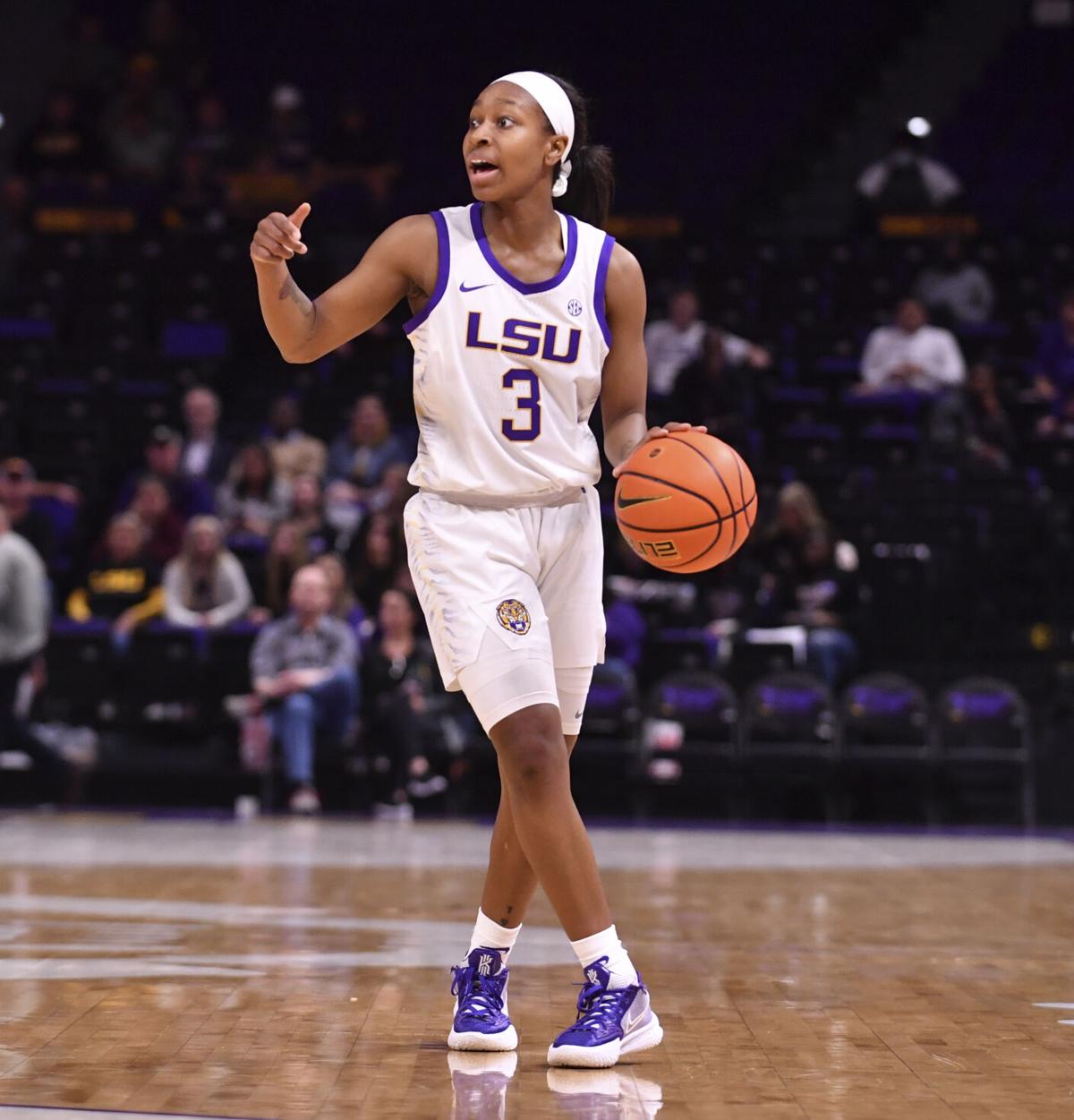 LSU coach Kim Mulkey celebrates a 3-pointer against Nicholls State on Tuesday, November 9, 2021, at the Pete Maravich Assembly Center. It was LSU's first game under the Hall of Fame coach.

LSU center Hannah Gusters (20) pulls in the rebound away from Nicholls center Kate Manley (30) on Tuesday, November 9, 2021, at the Pete Maravich Assembly Center.

The face everyone came to see could be seen throughout the Pete Maravich Assembly Center as fans, family and thousands of school kids deliriously delighted to be on a field trip filled the purple seats ringing the court.

“Kim Mulkey is my homegirl” a smattering of T-shirts read beneath an image of the new LSU coach. The one whose arrival has been like nothing in LSU athletic history. No one has come to LSU to coach after winning national championships like she did in the previous 21 seasons at Baylor, where she won three NCAA women’s basketball titles.

Tuesday, just after 11 a.m., the Mulkey era began at LSU with its first official game, played against Nicholls State. The taller Tigers controlled the tip, and in a span of seven seconds point guard Khayla Pointer drove to the basket for LSU’s first points.

The Tigers were slow out of the offensive blocks, leading just 12-5 after the first quarter, an uncomfortable reminder of LSU’s frequent struggles to score points in recent years. But they never trailed, thanks in large part to 12 steals, a 44-27 rebounding edge and a defense that allowed Nicholls to make only 26% of its field goals.

After a big offensive swoon, the Tigers jolted to life to start the second quarter behind a 3-pointer and a three-point trip from Pointer. LSU outscored Nicholls 27-5 in the second period to go up 39-10 at halftime and rolled to an 82-40 victory.

It was just about what you expected. LSU was bigger and deeper than Nicholls. Doubling up the visitors from Thibodaux was not a huge surprise. But to run off on some track that says LSU will be a Final Four team in Mulkey's first season is hardly realistic. Or fair.

When people meet Bunnie Cannon, the youngest of the late Billy Cannon’s five children, the topic is typically something related to LSU football.

“We’ve only just begun,” Mulkey said before reminding everyone that was the name of a song by The Carpenters. “We have to defend and we have to defend the entire court the entire game no matter what the score is. We have to get in that mode. We know what we face this year, and how talented teams are, particularly in the SEC. And so just quit looking at the clock. Don't worry about the score.”

It might have been an unusual backdrop for LSU win No. 1 for Mulkey, the 633rd of her career including all those other victories at Baylor. But it was certainly festive.

There were the T-shirts. There were school kids and basketball teams from all over Baton Rouge screaming and chanting and yelling. ESPN dispatched one of its top college basketball reporters, Mechelle Voepel, to paint the scene. And there were basketball luminaries scattered about, like future Naismith Hall of Famer Seimone Augustus, LSU men’s coach Will Wade and former All-SEC center Theresa Plaisance.

Mulkey, who always has a lot of family about her and who has made a priority of making former LSU players feel like part of the family, gave Plaisance a bouquet of flowers at midcourt and shared a huge embrace with Theresa’s mom, Nicholls coach DoBee Plaisance. Then came the hammering that the Plaisances and everyone else had to know was coming.

No hard feelings, of course. Strictly business. Mulkey, who was as animated as you’d expect, was working the officials all game and never let up until the final horn.

Taking the spotlight off of Mulkey for a while was Pointer, who did something that the great Augustus never did at LSU. She recorded just the fourth triple-double in LSU women’s history, scoring 16 points while dishing out 13 assists and grabbing 11 rebounds, the first since Katherine Graham had 26, 10 and 10 against Ole Miss in February 2010.

Pointer, court savvy and silky smooth the way coaches would like their point guard to be, was so busy ignoring the scoreboard per Mulkey’s directive that she didn’t know she was close to that rare stat line.

“I think I found out somewhere in the third quarter,” said Pointer, who later Tuesday was named to the Wooden Award Top 50 watch list. “I honestly didn't notice. My teammates do a great job of making me look good. I set them up for open shots and they knocked them down.”

Hannah Gusters, who came with Mulkey from Baylor, led LSU with 19 points while Autumn Newby had six points and 11 rebounds. Faustine Aifuwa had eight points to eclipse 1,000 for her LSU career.

The Tigers return to action Sunday when they host Florida Gulf Coast at 12:30 p.m. in the PMAC. The game will be streamed on SECNetwork+.

How committed to the 3-point shot is the Florida Gulf Coast women’s basketball team?