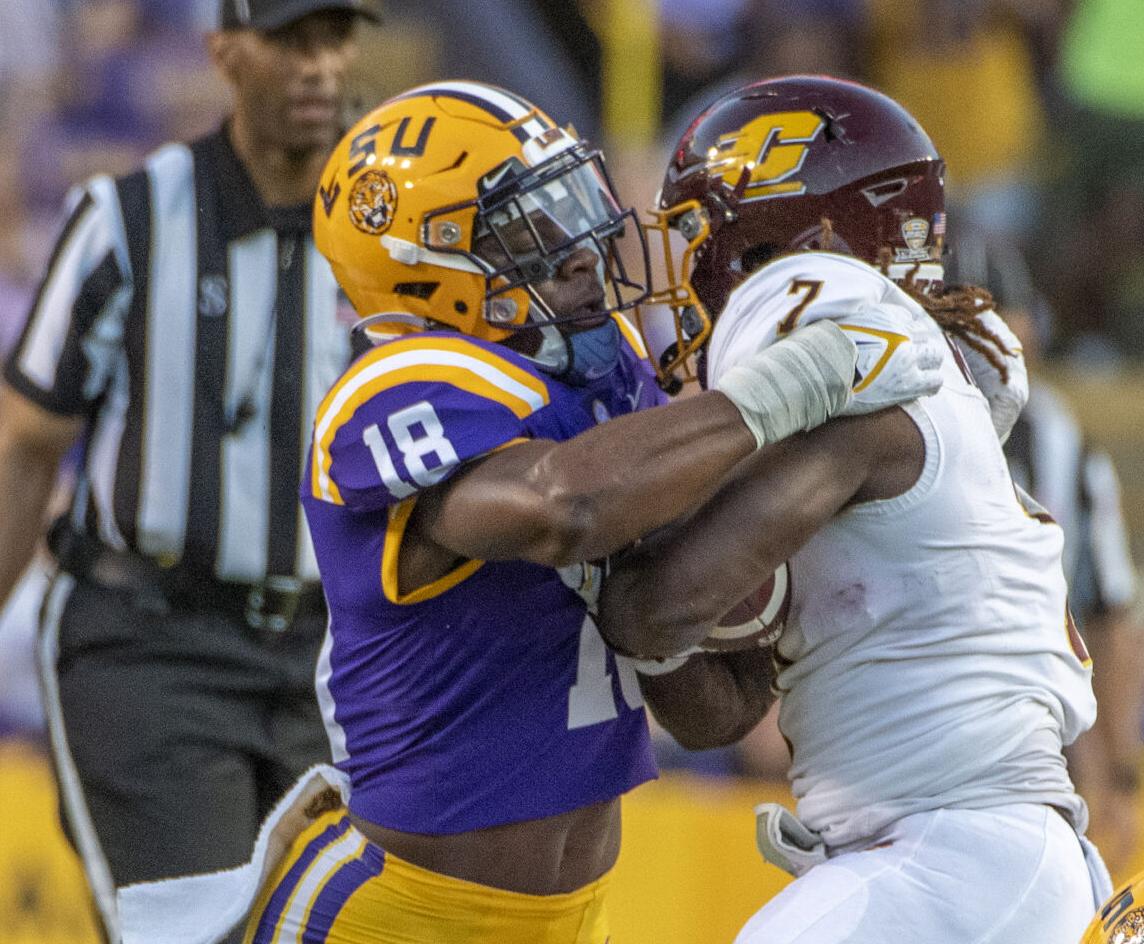 LSU linebacker Damone Clark (18) makes the stop for a loss on Central Michigan running back Lew Nichols III (7) during the first half at Tiger Stadium Saturday Sept. 18, 2021, in Baton Rouge, La. 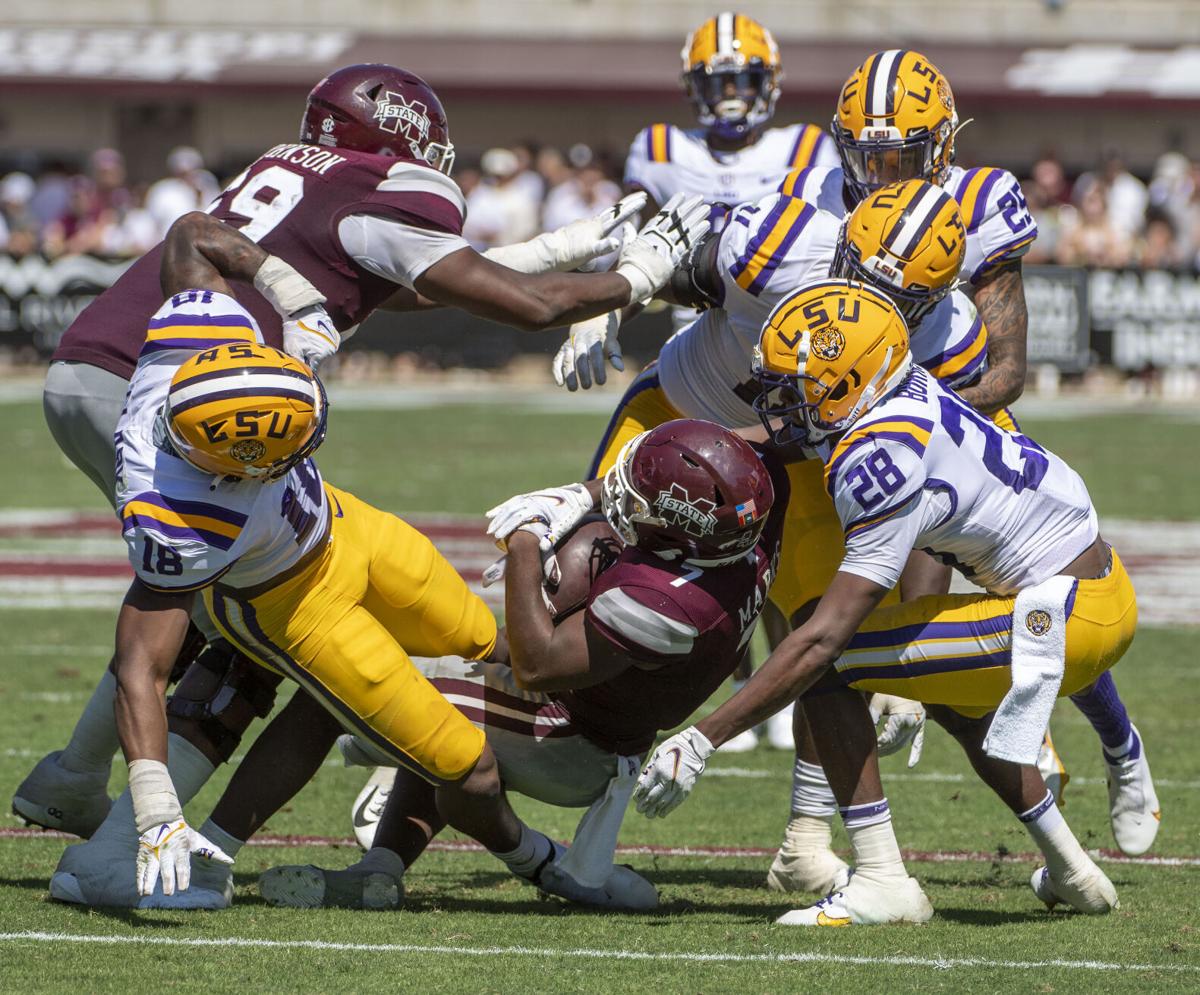 Mississippi State running back Jo'quavious Marks (7) is swarmed by LSU linebacker Damone Clark (18), safety Major Burns (28) and defensive end Ali Gaye (11) during the first half of their game at Davis Wade Stadium on Sept. 25. 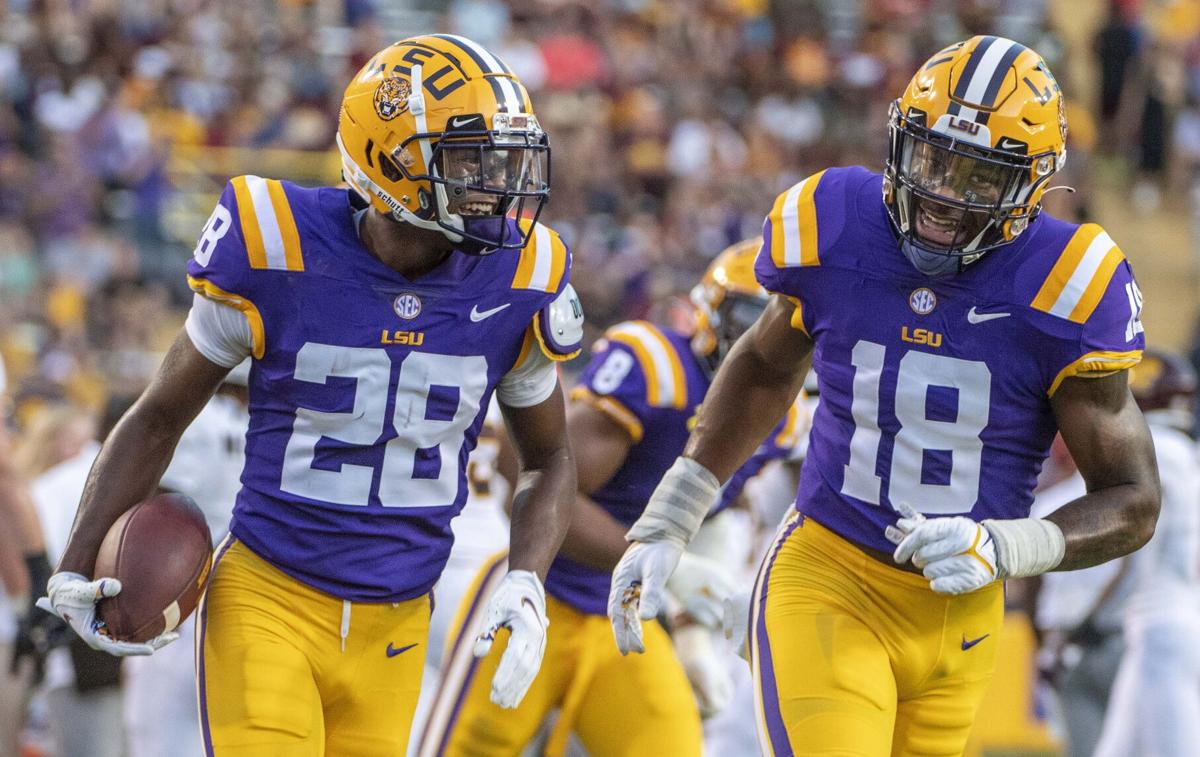 LSU safety  Major Burns (28) celebrates his interception against Central Michigan with linebacker Damone Clark (18) during the first half of their game at Tiger Stadium on Saturday Sept. 18, 2021.

LSU linebacker Damone Clark (18) makes the stop for a loss on Central Michigan running back Lew Nichols III (7) during the first half at Tiger Stadium Saturday Sept. 18, 2021, in Baton Rouge, La.

Mississippi State running back Jo'quavious Marks (7) is swarmed by LSU linebacker Damone Clark (18), safety Major Burns (28) and defensive end Ali Gaye (11) during the first half of their game at Davis Wade Stadium on Sept. 25.

LSU safety  Major Burns (28) celebrates his interception against Central Michigan with linebacker Damone Clark (18) during the first half of their game at Tiger Stadium on Saturday Sept. 18, 2021.

No one has to tell Damone Clark that he’s following in the footsteps of some of the great linebackers who have come through the LSU program in recent years.

Since arriving at LSU in 2018, he’s played alongside NFL first-round draft picks Devin White and Patrick Queen; third-rounder Jacob Phillips; and Jabril Cox, who went in the fourth round this past spring.

Yet, the former Southern Lab star isn’t getting too far ahead of himself.

When it was suggested earlier this week that the torch has been passed to him by those star linebackers, Clark politely shied away from that kind of heady talk.

Clark would rather think of it as a natural progression.

Queen, who had to wait his turn before helping LSU win the 2019 national championship, was taken 28th overall by the Baltimore Ravens in 2020.

The 6-foot-3, 240-pound Clark has led LSU in tackling in all four games, topped by his career-best 15 stops in a 28-25 road win against Mississippi State on Saturday.

He also scooped up a fumble and returned it 35 yards to set up the Tigers’ first touchdown.

“He looks like an NFL linebacker,” Orgeron said after the game, “and now, he’s playing like one.”

Rabalais: Will quarterback T.J. Finley return to LSU as a conquering hero for Auburn?

Hank Tierney fully expected Auburn to put starter Bo Nix back in when the Tigers got the ball at their 2-yard line with 3:13 left Saturday, fl…

Clark, who had 63 tackles in 10 games a year ago, tops LSU defenders this season with 42 stops — 17 more than fellow linebacker Micah Baskerville — and also leads the Southeastern Conference.

At the rate he’s going, Clark — the reigning SEC defensive player of the week — will surpass that total in a couple of games.

His statistics are noteworthy because Orgeron said open-field tackling was one area he told Clark he had to improve on in spring drills and preseason practice.

“Damone is a great young man, a smart young man,” Orgeron said. “We identified the things he needed to get better at. One of the things was open-field tackling. Obviously, he’s doing a great job of it.”

Clark took their talk to heart and, with the help of new linebackers coach Blake Baker, appears to have taken the next step in his development.

“I needed to be more physical at the point of attack, with taking on blocks,” Clark said. “Those are things I’ve talked with Coach Baker and with Coach O about.

“Those are some of the things I need to improve on; pass coverage is the next thing,” he said. “There’s still ongoing skills I’m working on because you can always sharpen up a tool every day.”

Clark said Baker is not only a coach on the field and in the meeting room, but he’s been like a father and a friend in their few months together.

“He makes you comfortable with him, and that’s the biggest thing — just having a relationship with a coach that’s been everywhere,” he said. “He always tells me to go out there and just play, ‘Trust what you see and don’t second-guess yourself.’ ”

Jontre Kirklin and Soni Fonua, both fifth-year seniors, had missed the last four games because of academic issues.

In addition to his play on the field, Orgeron raves about Clark’s leadership ability.

It’s one of the reasons he’s wearing the No. 18 jersey.

“Damone’s an excellent young man, he’s a hard worker,” Orgeron said. “Look, you can come here on Saturday or Sunday and Damone Clark is in here working.”

Clark said he wants to be a role model to the younger players on the team, just like White, Phillips and Queen were to him when he was an underclassman.

“We have a lot of younger guys, so I just want to be that person they can go to on and off the field,” Clark said. “First, I have to make sure I’m doing the right things before I can sit there and tell somebody else what to do.”

Left tackle Cameron Wire remains on track to play this weekend against Auburn, while cornerback Derek Stingley Jr. will likely miss his second…