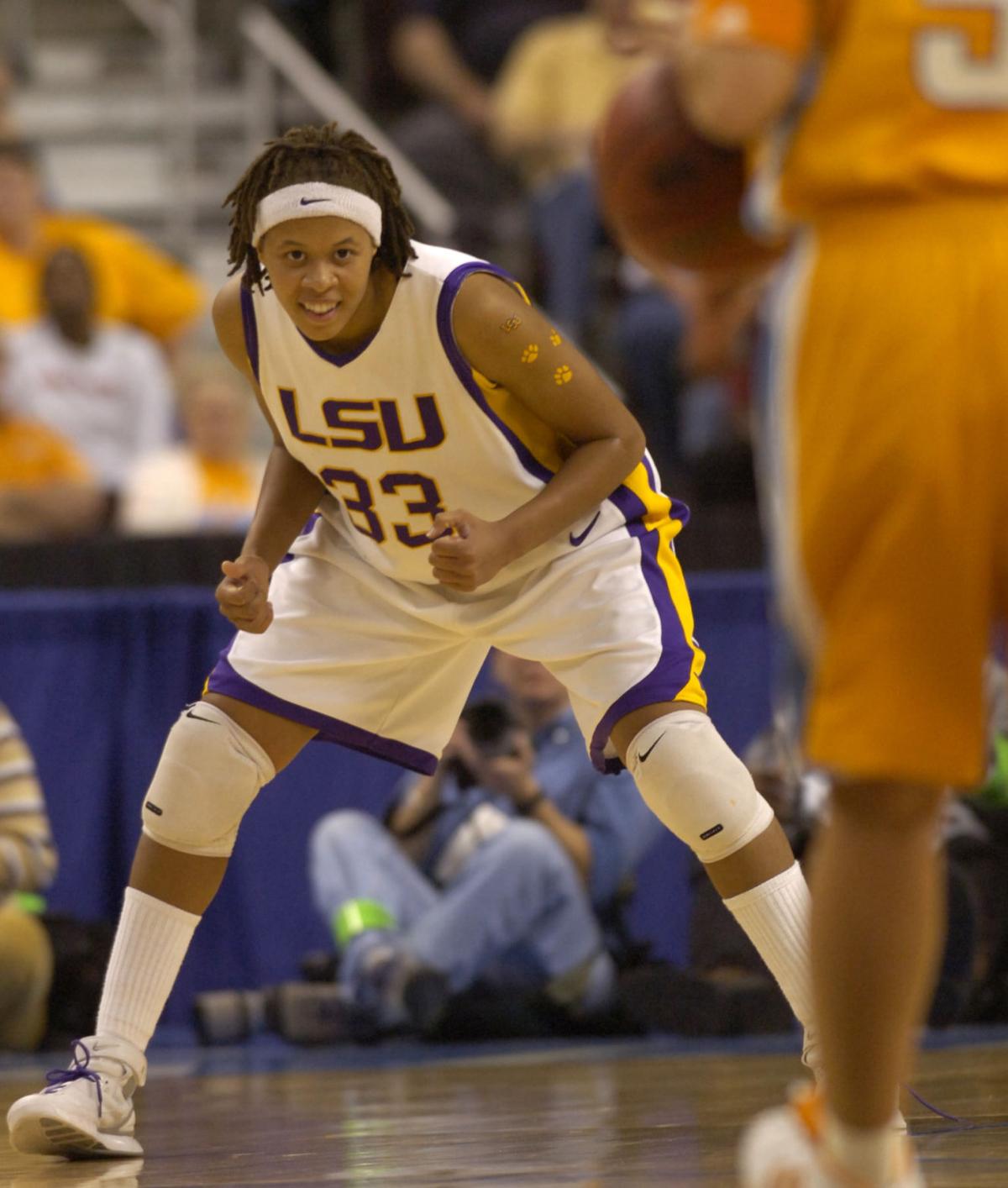 Seimone Augustus puts the pressure on a Tennessee player during the SEC tournament final on March 5, 2006 in North Little Rock, Ark. 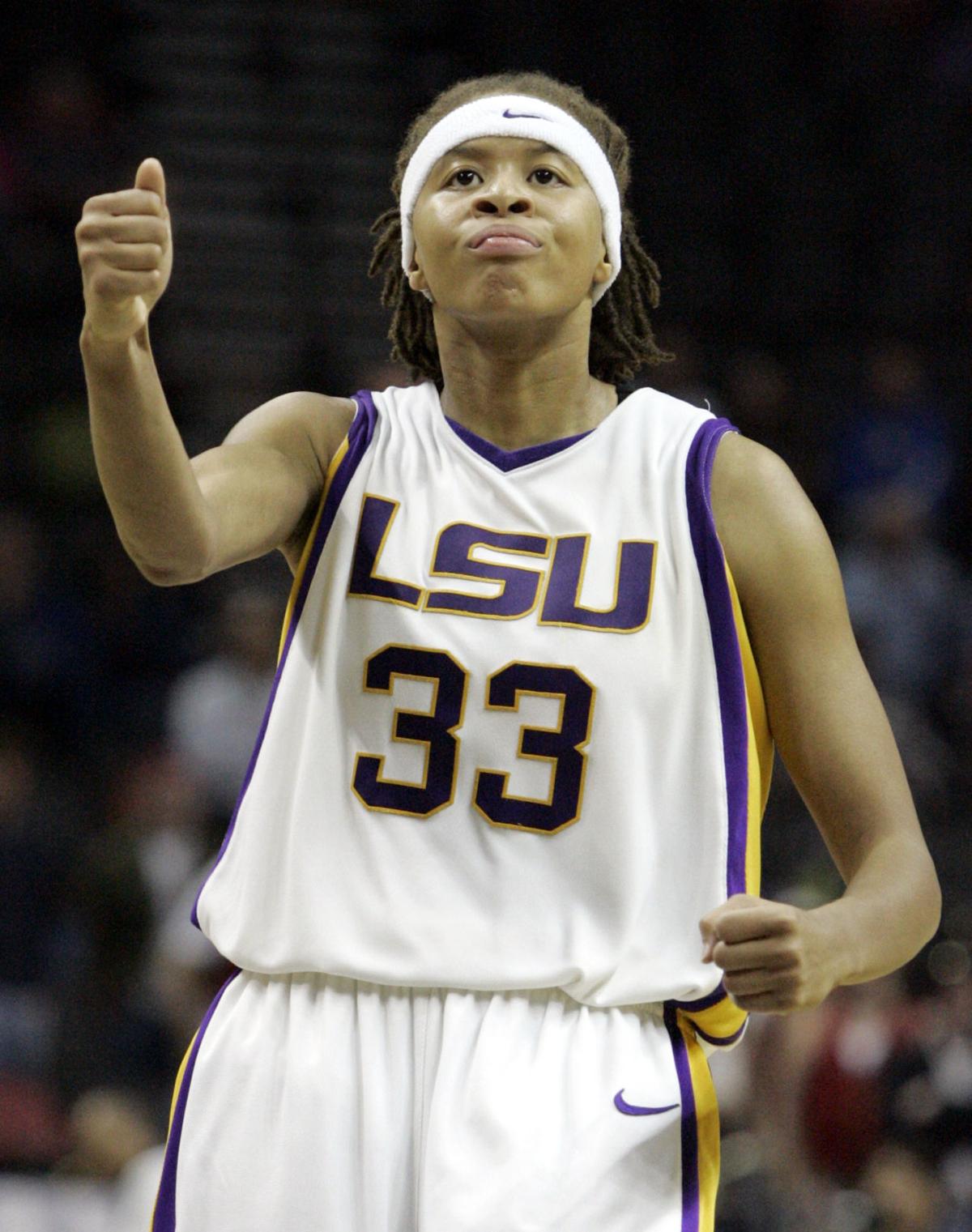 LSU guard Seimone Augustus reacts after hitting a free throw in the last seconds of the Tigers' 62-59 win over Stanford in the NCAA San Antonio regional final, Monday, March 27, 2006. 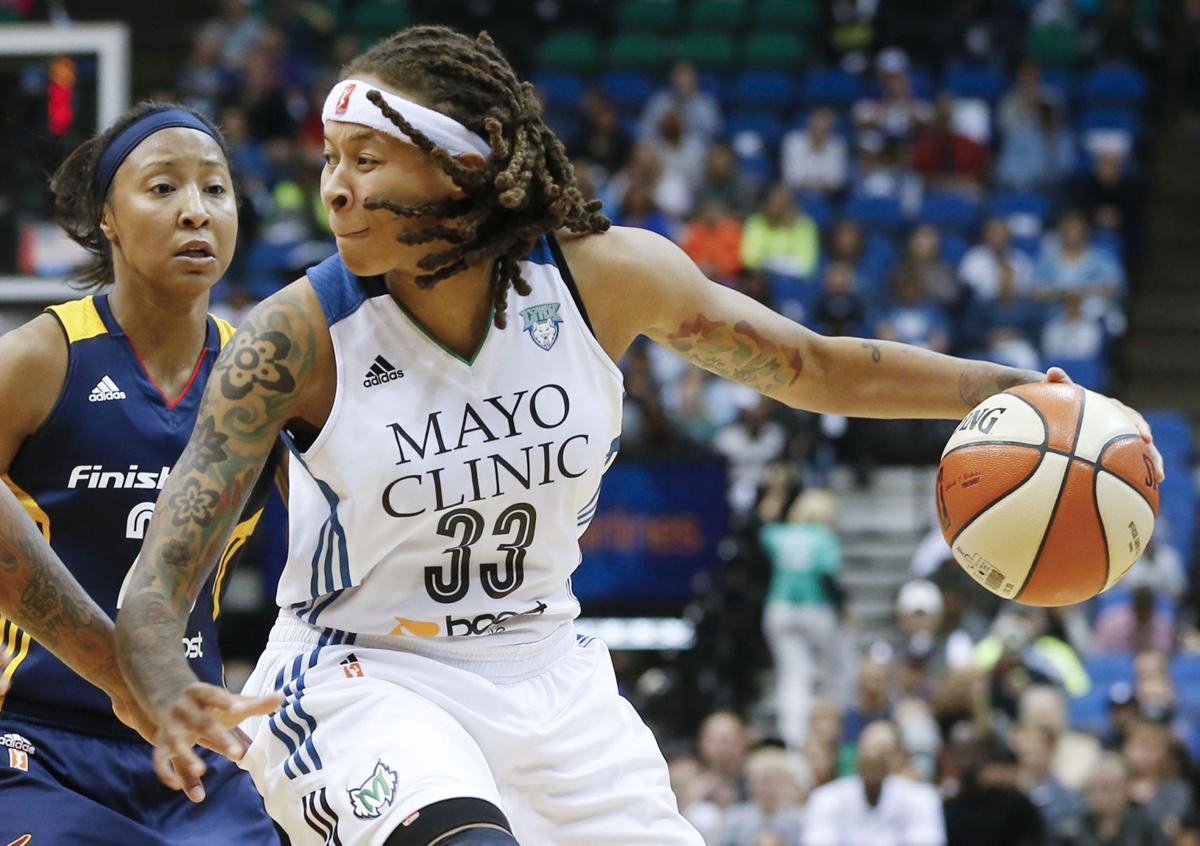 Minnesota Lynx guard Seimone Augustus, right, drives around the Indiana Fever's Briann January in Game 1 of the WNBA finals on Oct. 4, 2015 in in Minneapolis. 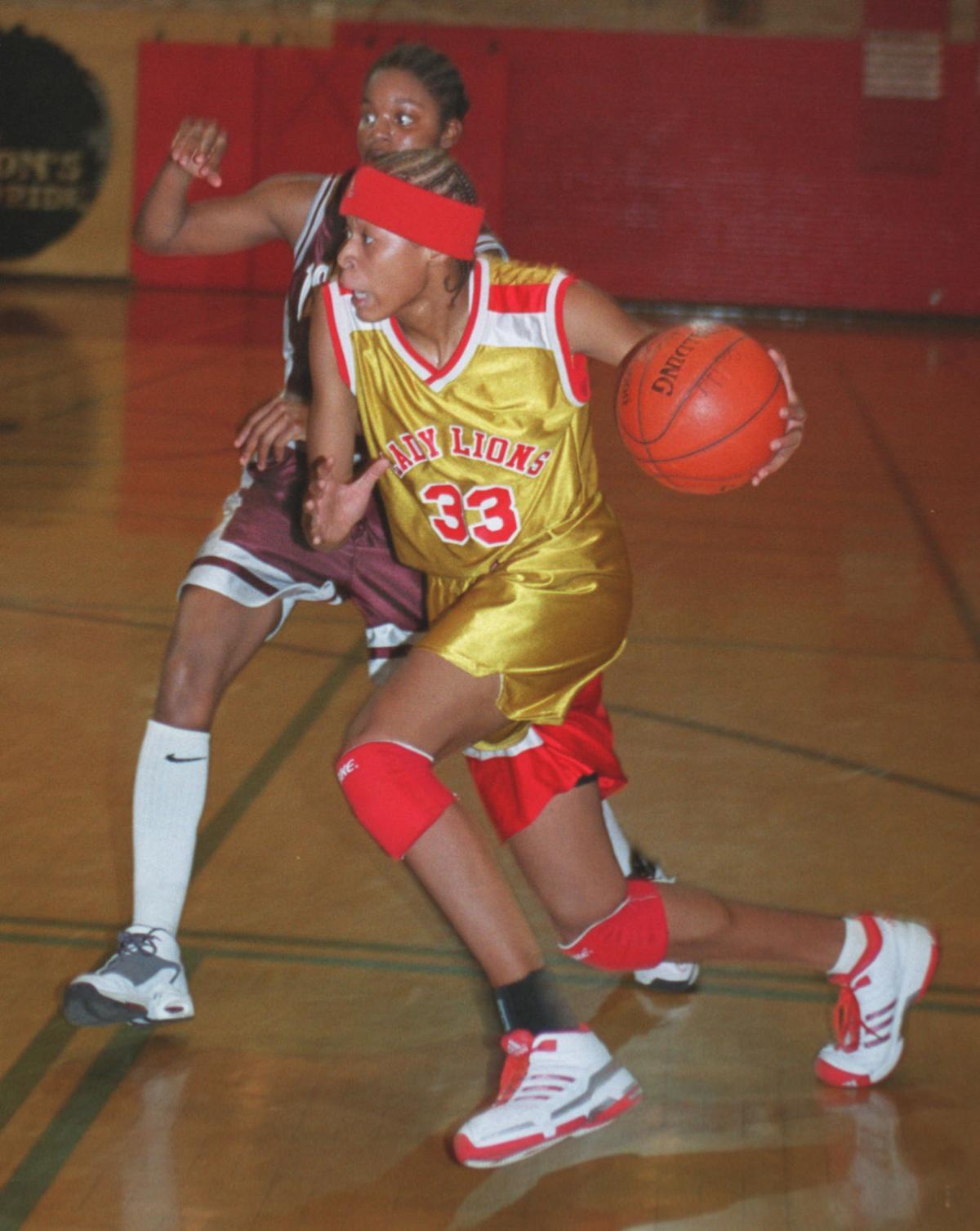 Seimone Augustus puts the pressure on a Tennessee player during the SEC tournament final on March 5, 2006 in North Little Rock, Ark.

LSU guard Seimone Augustus reacts after hitting a free throw in the last seconds of the Tigers' 62-59 win over Stanford in the NCAA San Antonio regional final, Monday, March 27, 2006.

Minnesota Lynx guard Seimone Augustus, right, drives around the Indiana Fever's Briann January in Game 1 of the WNBA finals on Oct. 4, 2015 in in Minneapolis.

The last stop of Seimone Augustus’ incredible basketball career turned out to be with the WNBA’s Los Angeles Sparks.

The next stop for the Louisiana and LSU basketball legend is almost certainly going to be the Naismith Basketball Hall of Fame.

Augustus officially retired Thursday on the eve of the new WNBA season, swiftly transitioning into a new role as a Sparks assistant coach. Los Angeles opens its season at home Friday against Dallas.

“It’s an honor to continue to serve the game that has given me so much,” Augustus said in a brief statement from the team. “I’m excited to join the Sparks staff and look forward to developing in this new role.”

The 37-year old Baton Rouge native leaves behind a glittering career filled with championship trophies, record-setting achievements, multiple player of the year and hall of fame honors and three Olympic gold medals. A winner and elite performer at every level, Augustus is on the short list as one of the best basketball players ever from Louisiana and one of the very best athletes ever to come out of Baton Rouge.

“Seimone was a generational player — once in a lifetime — who impacted the game at every level,” said Bob Starkey, an assistant under Sue Gunter and Pokey Chatman during the Augustus years now coaching at Auburn. “I truly believe she was the most significant athlete in LSU history because of the heights to which she took our program and the national relevance she created.”

Augustus started garnering national headlines at Capitol High school where she starred from 1998-2002, making the cover of “SI for Kids” in 1999. Wearing her trademark headband, Augustus wore out opponents with a deadly midrange jump shot that seemed to come off her hand just as she was starting on her way back down, averaging 24.8 points, 11.9 rebounds and 6.0 assists for her career.

She led Capitol to four straight Sweet 16 appearances, Class 4A state championships in 2001 and 2002 and a four-year record of 138-7 including a 52-game winning streak to end her career. She was class 4A MVP all four years, Louisiana’s Miss Basketball and a Parade All-American as a junior and senior and a McDonald’s All-American her last year as well. In 2019, Augustus joined new LSU coach and former Hammond High star Kim Mulkey as the only two Louisiana girls basketball players in the National High School Sports Hall of Fame.

After a heated recruiting battle with Tennessee, Augustus decided to stay at home to play for LSU. She quickly drew thousands of new fans to the Pete Maravich Assembly Center and lifted the program to an unprecedented level of success. She led the Tigers to an SEC tournament title and NCAA regional final as a freshman in 2003 and the first three of what eventually became five consecutive Women’s Final Four appearances in 2004, 2005 and 2006. With Augustus, LSU also won its first two Southeastern Conference regular-season championships in 2005 and 2006.

She averaged 19.3 points, 5.2 rebounds and 2.0 assists for her career, making 54.4% of her field goals and 84.7% of her free throws. Augustus scored in double figures in an NCAA record 132 of her 140 games at LSU, including a school record 97 straight. She wound up as the program’s second all-time leading scorer behind only Joyce Walker with 2,702 career points.

Augustus was a three-time All-American and All-SEC selection and won the AP player of the year, Naismith Player of the year, the Wade Trophy, the John R. Wooden Award and the Honda Sports Award as a junior and senior. In 2010 she became the first women’s basketball player to have her jersey retired when LSU hung her No. 33 from the rafters in the Pete Maravich Assembly Center.

Despite all her success and acclaim as a player, Augustus and LSU came up short of a national title. The Tigers lost in the national semifinals all three years they made the Women’s Final Four with her, including to Mulkey’s Baylor team in 2005. But the titles that eluded her at LSU soon came in the WNBA.

The No. 1 overall draft pick in 2006 by the Minnesota Lynx, Augustus was rookie of the year that season and led the franchise to four WNBA titles in odd numbered years from 2011-17, winning in 2015 and 2017 with former LSU teammate and All-American Sylvia Fowles. Augustus was named MVP of the Lynx’s 2011 WNBA championship series win over the Atlanta Dream.

Again teaming with Fowles, Augustus also played on three gold medal-winning U.S. basketball teams in 2008 in Beijing, 2012 in London and 2016 in Rio de Janeiro. Augustus finishes her WNBA career with 6,005 points (15.4 per game) and eight All-Star Game appearances. She also won two European league basketball titles in 2008 and 2009 and helped the U.S. to a world championship title in 2014.

Slowed by injuries late in her career, Augustus played only 12 games with the Lynx in 2019 before signing with the Sparks in 2020. She played in 21 games last season and averaged 5.9 points per contest. She re-signed with Los Angeles in February but announced her retirement a day before the new season begins.

Augustus earned multiple national player of the year honors as a junior and senior, capturing the Wade Trophy, the John R. Wooden Award, the Naismith Award and being named Associated Press player of the year. She was the consensus national freshman of the year in 2003 and also earned All-American honors her sophomore through senior seasons.

The No. 1 overall draft pick in 2006 by the Minnesota Lynx, she led the franchise to four WNBA titles in odd numbered years from 2011-17, winning in 2015 and 2017 with former LSU teammate and fellow Tigers All-American Sylvia Fowles. Augustus was named MVP of the Lynx’s 2011 WNBA championship series win over the Atlanta Dream.

“Seimone Augustus is one of the greatest basketball players to ever step foot on a court,” said Sparks coach and general manager Derek Fisher, the former Lakers guard. “Her impact as a pioneer in our sport can be seen through all the players and people she’s impacted in this game. It’s been an amazing honor to work with her over the past year and we’re excited to add all of her wisdom to our coaching staff.”

Photos: Look back on the career of Seimone Augustus as she retires as a player

Seimone Augustus is retiring from the WNBA and will be named a Sparks Assistant Coach. Augustus is an eight-time WNBA All-Star and four-time c…