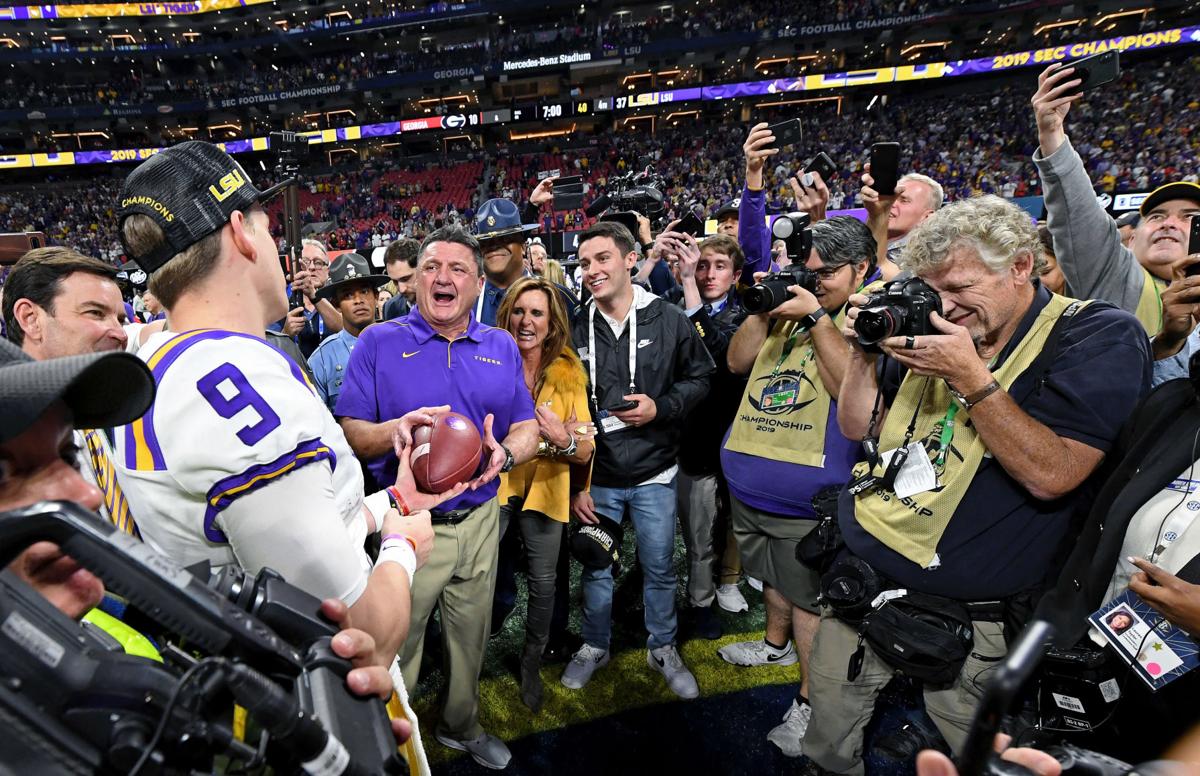 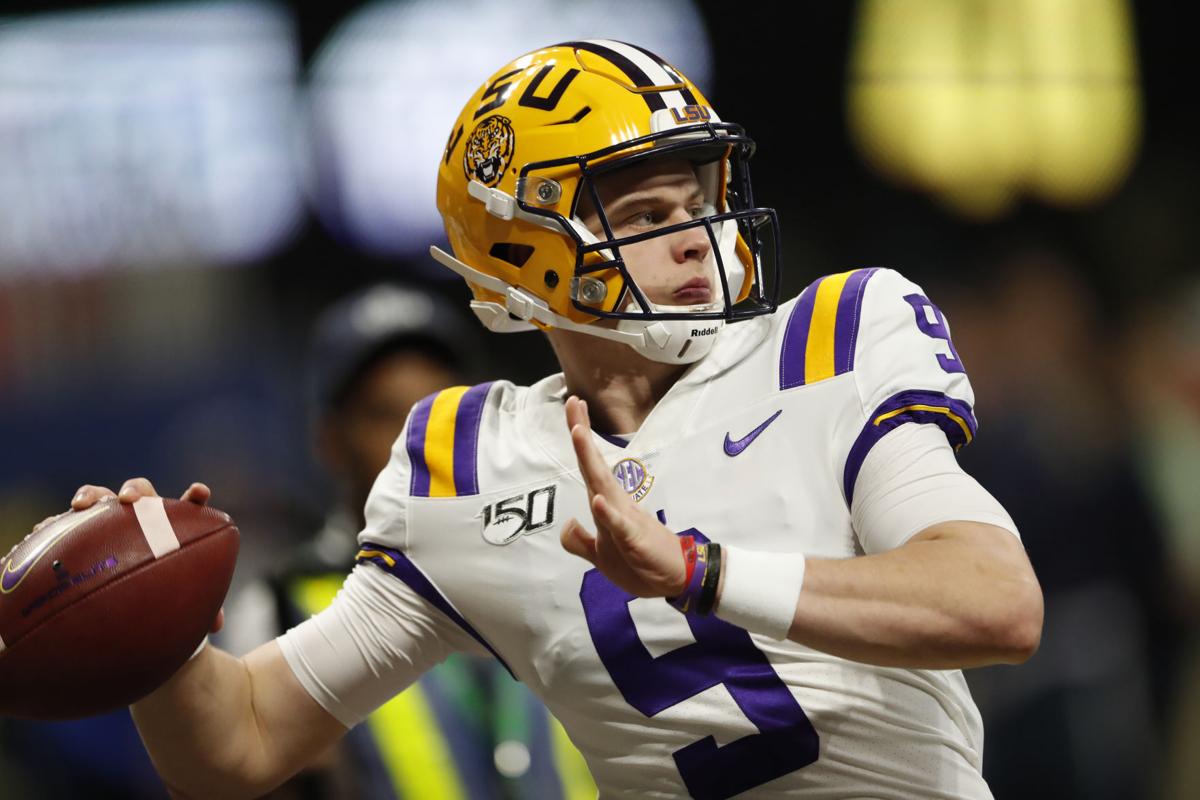 LSU quarterback Joe Burrow (9) wams up before the first half of the Southeastern Conference championship NCAA college football game between LSU and Georgia, Saturday, Dec. 7, 2019, in Atlanta. (AP Photo/John Bazemore)

LSU quarterback Joe Burrow (9) wams up before the first half of the Southeastern Conference championship NCAA college football game between LSU and Georgia, Saturday, Dec. 7, 2019, in Atlanta. (AP Photo/John Bazemore)

“I’m going to get some negative comments,” Orgeron said only a few weeks after going from LSU’s interim to permanent coach. “I’m not everyone’s first, second or third choice. But I got the job, and I’m going to work day and night to get this program back on top.

“Some of the naysayers will laugh about this, but in a very short period of time, LSU will be back in the SEC championship game and in the (College Football Playoff) final four series for the national championship. I promise you that.”

The LSU Tigers have done it -- they're champions of the Southeastern Conference!

Saturday night in Mercedes-Benz Stadium, Orgeron and his Tigers made good on his vow, defeating Georgia 37-10 for LSU’s first Southeastern Conference championship since 2011, and looking to the horizon for even more riches.

And naysayers? They’re looking for someone else to bash. Someone not named Ed Orgeron, who is now 9-1 in his past 10 games against top-10 opponents.

This championship wasn’t won with luck. It was a combination of things: Orgeron’s guts to remake LSU’s offensive culture, to hire Joe Brady to turbocharge the offense and to recruit Joe Burrow to shine it to a high gloss. It wasn’t won by backing into it with some other team or teams crumbling unexpectedly.

LSU went out and beat everyone in its path for 13 Saturdays this season. Few championships have ever been more deserved.

When Les Miles led LSU to the 2007 BCS national championship, overcoming a pair of triple-overtime losses along the way, detractors said he did it by just taking Nick Saban's program and keeping it on auto pilot. That was unfair, but it was also a stigma Miles never quite shook.

There are a few key players still on LSU’s roster recruited under Miles — seniors like defensive end Rashard Lawrence and left tackle Saahdiq Charles and fourth-year junior center Lloyd Cushenberry. But in large part because of Burrow and Brady, and the offensive vision Miles would not embrace, no one is saying this title isn’t of Orgeron’s creation. Crafted by his touch.

The coach Ole Miss and Southern California once cast off is now in his natural habitat, leading his home state’s team to glory in the sport Louisiana loves like no other. Making a bunch of guys from a state ranked 48th in this and 49th in that the best in the nation’s toughest conference. And, quite arguably, the best team in the nation, period.

“I love that guy,” Burrow said amid postgame streamers and title T-shirts. “If you don’t want to fight for him, something’s wrong with you.”

They fought for him, all right, a guy dug out of the Louisiana swamps with a voice, as ESPN’s Rece Davis said, that sounds like it came from inside a cement mixer.

Orgeron is Louisiana, and Louisiana is him. Swamp water courses in his veins. And doesn’t it mean a little more to LSU fans to have a coach who could be one of them, working on an oil rig or a shrimp boat, than someone who came from West Virginia via Michigan for a business opportunity?

Orgeron's Tigers leave here with a trophy and confetti in their hair and seeking more glory. The final College Football Playoff rankings are released at 11 a.m. Sunday on ESPN, and one defies the CFP committee not to rank LSU No. 1.

The Tigers now have wins over current CFP teams ranked No. 4, No. 9, No. 11 and No. 12. Two of those wins — Georgia here, in what was essentially a home game for the Bulldogs in Mercedes-Benz Stadium — and at Alabama, over teams ranked in the top five at the time. Ohio State might pass some sort of purely subjective eye test, but LSU has an unmatched résumé.

And emboldened in victory as you can expect, they're ready to take on all comers in their CFP semifinal, whether it's back here in the Peach Bowl or back in Arizona in the Fiesta.

"You can take us to Canada, and we'll play on a gravel lot," Burrow said. "It doesn't matter where or who we play."

One thing that definitely doesn't matter: what any other Heisman Trophy contenders do in the face of the magnum opus Burrow finished off Saturday.

Against the nation’s No. 2-ranked defense, which had not allowed more than 20 points or 343 yards in any game this season, Burrow went off for 406 total yards (349 passing, 57 rushing) and four touchdowns. His double-duck scramble around Georgia defensive end Travon Walker to hit Justin Jefferson with a 71-yard pass in the third quarter is a Heisman moment for the ages.

"It was all improvised," Burrow said. "Justin ran a 6-yard hitch route and saw me scrambling and took off deep. We've got a great feel for each other. I knew exactly where he was going to be when I got out of there."

Last season, Orgeron famously put another memorable quote out there about what he saw as the inevitable rise of his LSU program.

LSU has arrived, at least to this point, undefeated and unbowed. After what is sure to be a week of awards for Burrow and Orgeron and wide receiver Ja’Marr Chase for a start, the Tigers begin their quest for a CFP national title.

“We’ve got two more games to play,” Orgeron said, referring to a CFP semifinal and the national title game in New Orleans. “So we’re getting to work tomorrow.”

Another bold statement from Orgeron. Based on Saturday's results, it’s hard to second-guess him.

Tory Carter ejected for targeting in Georgia game; suspended 1st half of LSU's next game

Joe Burrow has no equal in SEC history -- at least not in the areas that count most on the scoreboard.

Rashard Lawrence unsure of LSU's CFP matchup, but wants it in Phoenix: 'We like the food'

The LSU title celebration was just getting started in LSU's locker room, Rashard Lawrence was clearly still hungry -- in more ways than one.

ATLANTA — Considering the success LSU’s spread offense has enjoyed his season, it was no surprise that passing-game coordinator Joe Brady’s na…

The LSU coaches will find plenty to celebrate now that the Tigers have won their first Southeastern Conference championship since 2011, and pa…

Recap CFP selection show: See what they're saying about LSU in the playoffs

The College Football Playoff selection show is certain to have the attention of LSU fans on Sunday morning.