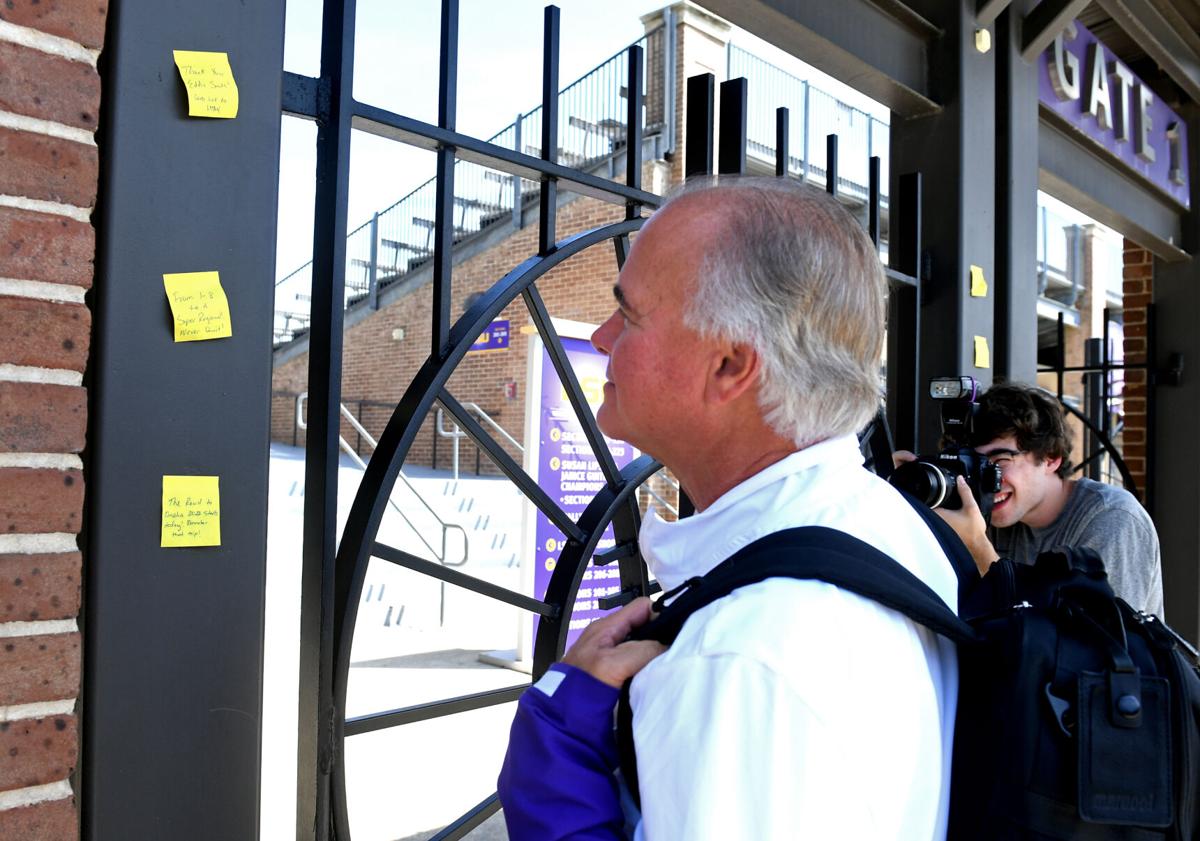 Retiring LSU coach Paul Mainieri stops to read sticky notes left by fans for him and the team at Alex Box Stadium as they returned Monday, June 14, 2021 from the NCAA Knoxville super regional. 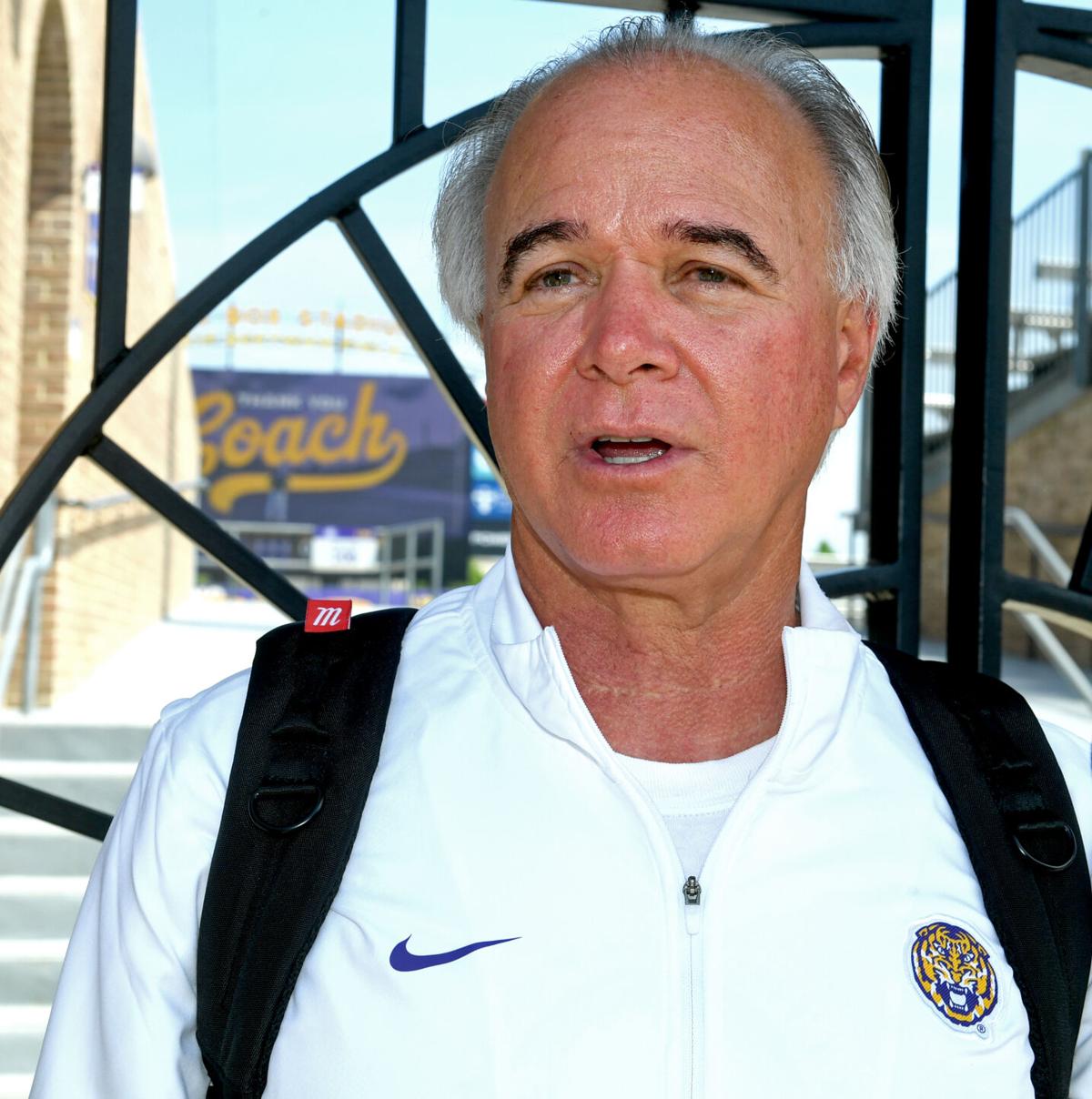 Retiring LSU baseball coach Paul Mainieri stops to talk with media after the Tigers returned Monday, June 14, 2021 from the NCAA Knoxville super regional. Behind him is a thank you message on the Alex Box Stadium video board.

Retiring LSU coach Paul Mainieri stops to read sticky notes left by fans for him and the team at Alex Box Stadium as they returned Monday, June 14, 2021 from the NCAA Knoxville super regional.

Retiring LSU baseball coach Paul Mainieri stops to talk with media after the Tigers returned Monday, June 14, 2021 from the NCAA Knoxville super regional. Behind him is a thank you message on the Alex Box Stadium video board.

As Paul Mainieri brought his last baseball team home to Alex Box Stadium for the last time, messages both large and small awaited him and his players.

The large message took up the entire video scoreboard behind the left field fence, itself a field of purple with a picture of Mainieri standing beneath a simple message: “Thank you, coach.” The small messages were words of encouragement and appreciation tacked on yellow and purple sticky notes to an Alex Box Stadium gate on the first-base side. Mainieri, after stepping off the team’s lead bus from the airport, read each one.

“The Road to Omaha 2022 starts today! Remember that trip!”

No one will be cheering for the Tigers to make the trip to Omaha and next year’s College World Series more than Mainieri. But he will be cheering as a spectator, not as the coach. Sunday’s 15-6 super regional elimination at Tennessee brought an end to his coaching days, switching his position from the LSU baseball program’s leader to chief supporter.

One of them, anyway.

Skip Bertman was both Mainieri’s esteemed predecessor and first boss at LSU, hiring him away from Notre Dame in 2007. Both men have been allowed their input regarding LSU’s next baseball coach, but Mainieri said there is a foul line he will stand behind when it comes to the search.

“Scott (Woodward) has asked me about the candidates,” Mainieri said, referring to LSU’s athletic director. “I certainly don’t have that much input, and I don’t want that much input. I want Scott to make the decision. We have a very competent administrative staff here with Scott, (assistant athletic directors) Stephanie Rempe and Dan Gaston. They’re doing their homework, and I’m going to support whoever they decide to make the baseball coach.

“I’m very grateful they’ve asked me my opinion about people, and I’ve given them some names of people I think would be really good candidates. I think they’re working their way through the process right now.”

The most visible part of the process is the list of names no longer part of it. Florida coach Kevin O’Sullivan issued a statement last week that he was staying put, which typically means someone is no longer in the running. Sources said former Oregon State coach Pat Casey, whose name also surfaced last week as a frontrunner, is also out.

Ole Miss coach and former LSU catcher Mike Bianco is now available after his Rebels were thumped by Arizona on Sunday night in Game 3 of their super regional. So is former Mainieri assistant Cliff Godwin, whose East Carolina team lost its super regional at Vanderbilt. Speaking of Vanderbilt, might Woodward make a swing for Vandy coach Tim Corbin? And lots of folks, myself included, wonder if LSU will pursue Louisville coach Dan McDonnell, who candidly told the Louisville Courier-Journal he was happy at UL but would listen if LSU called.

Rabalais: Paul Mainieri doesn't go out on winning note, but he definitely goes out a winner

The end of the Paul Mainieri era finally had an expiration date.

“I’m anxious, like everybody, to see who the new coach will be,” Mainieri said. “I’m going to do nothing but support the new coach and be a resource for him and help in any way I possibly can. I’m not going to overstep my boundaries. It’s going to be up to the new coach to run the program the way he feels is right. No two coaches are exactly alike. What I would have done in a situation is not necessarily what the new coach will do. He doesn’t need to see me standing there looking over his shoulder and second-guessing him. He’s going to be under enough pressure as it is, and he needs to do things his way.”

Like the sticky note said, the Road to Omaha 2022 starts now. And the new coach will be tasked immediately with getting the Tigers there.

Volunteer for an apology: As the public address announcer at Tennessee’s Lindsey Nelson Stadium congratulated Mainieri on his Hall of Fame career, some of the victory-flushed Vols fans decided to boo the outgoing LSU coach. I’m told there were plenty of angry epithets hurled his way, too.

Mainieri incurred Tennessee fans’ wrath by criticizing the “nasty” way they treated his team during a three-game series there in March. But he also congratulated Tennessee on its trip to the CWS in his postgame news conference before talking about his team or himself.

LSU fans have a reputation being bad-tempered, too. Tennessee fans no doubt recall windows being broken on one of their football team’s buses as they arrived outside Tiger Stadium in 2005.

But Mainieri handled himself with class before, during and after the regional, having apologized for his March comments in a pre-tournament presser. He deserved the sort of warm sendoff retiring Florida State coach Mike Martin got at The Box after his Seminoles beat LSU in the 2019 super regional. LSU fans, particularly its baseball fans, have a well-deserved reputation for moments like that, too.

If Mainieri could apologize for what he said, he deserves an apology from Tennessee athletic director Danny White and baseball coach Tony Vitello for what their fans did. But don’t hold up the retirement waiting for one, coach.

What comes next for LSU baseball? Offseason will bring coaching change, roster decisions

With Paul Mainieri's retirement, LSU will begin its offseason by hiring a new coach. Whoever gets the job will have little time to construct the roster for next season.