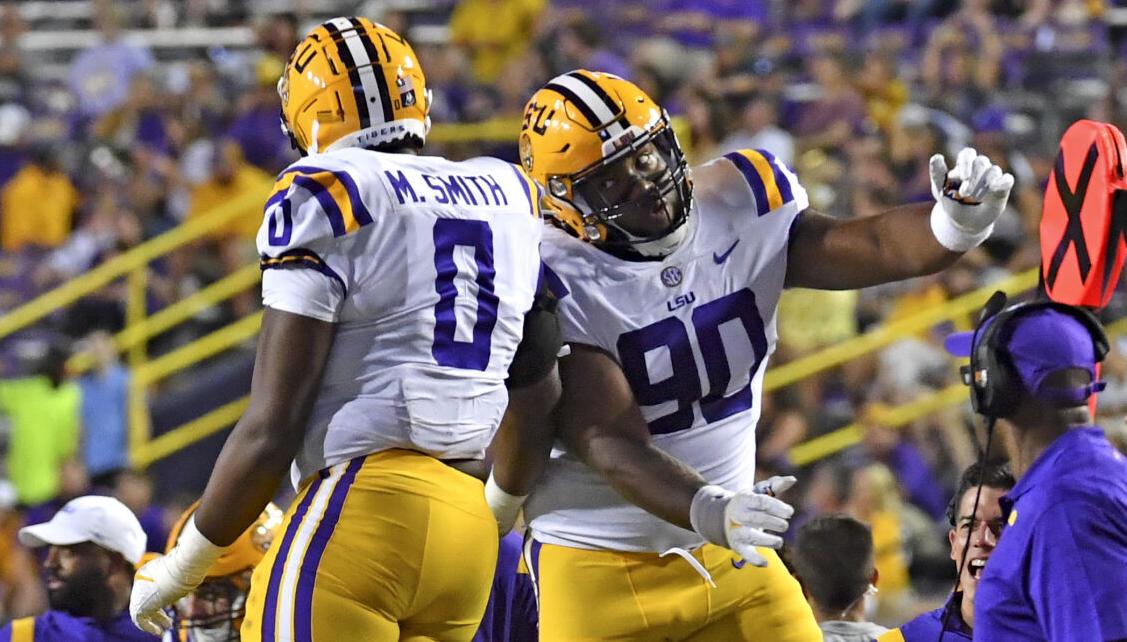 LSU defensive lineman Maason Smith (0) goes airborne with LSU defensive tackle Jacobian Guillory (90) as they celebrate Smith's sack on McNeese quarterback Cody Orgeron in the second half of the Tigers' 34-7 win over the Cowboys, Saturday, September 11, 2021, at Tiger Stadium in Baton Rouge, La. 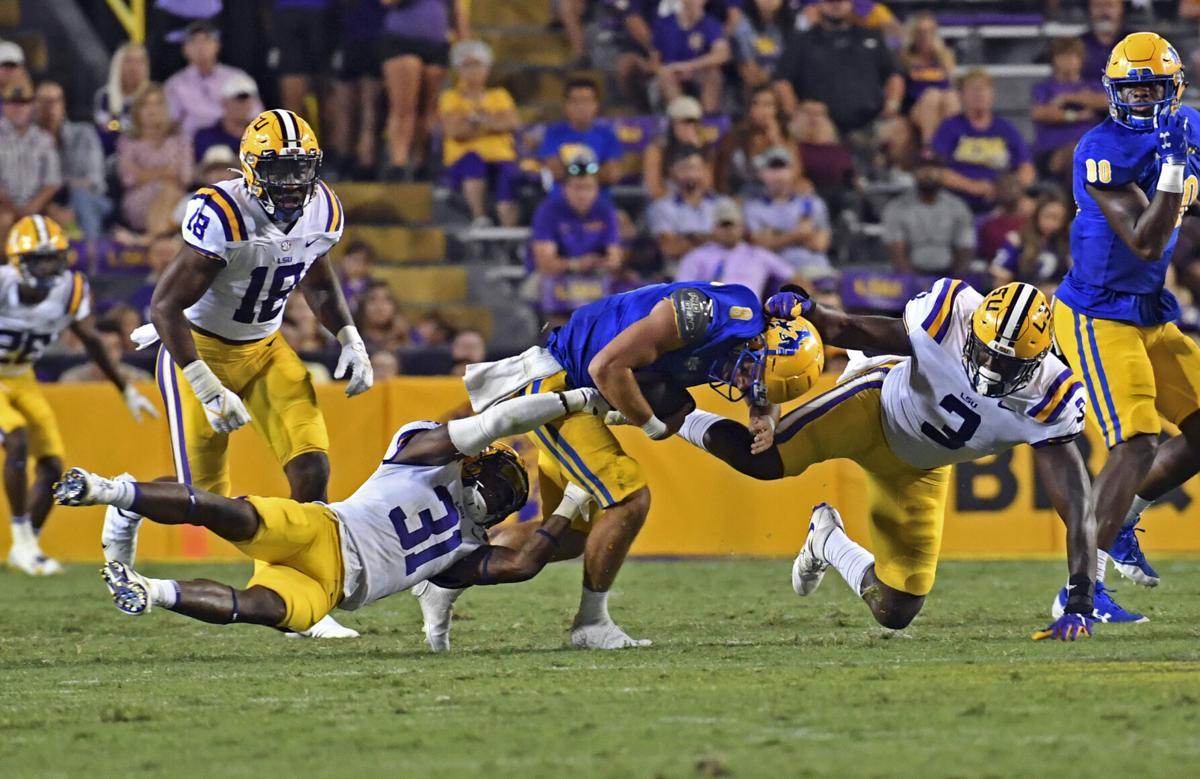 McNeese quarterback Cody Orgeron (8) is taken down by LSU safety Cameron Lewis (31) and LSU linebacker Andre Anthony (3) in the second half of the Tigers' 34-7 win over the Cowboys, Saturday, September 11, 2021, at Tiger Stadium in Baton Rouge, La.

LSU defensive lineman Maason Smith (0) goes airborne with LSU defensive tackle Jacobian Guillory (90) as they celebrate Smith's sack on McNeese quarterback Cody Orgeron in the second half of the Tigers' 34-7 win over the Cowboys, Saturday, September 11, 2021, at Tiger Stadium in Baton Rouge, La.

McNeese quarterback Cody Orgeron (8) is taken down by LSU safety Cameron Lewis (31) and LSU linebacker Andre Anthony (3) in the second half of the Tigers' 34-7 win over the Cowboys, Saturday, September 11, 2021, at Tiger Stadium in Baton Rouge, La.

One week after giving up 38 points and being pounded for 470 yards — including 210 on the ground — the Tigers looked like they were supposed to look against a Football Championship Series team.

Bouyed by its return to Tiger Stadium, which had no COVID-capacity restrictions for the first time since the end of the 2019 season, LSU’s defense bounced back and put the clamps on McNeese State’s offense in a 34-7 victory.

LSU coach Ed Orgeron said early last week that he wouldn’t hold back his defense against his son, McNeese quarterback Cody Orgeron, and he wasn’t kidding.

At the same time, the younger Orgeron said he wouldn’t expect anything less from his defensive-minded father.

“We were attacking; we needed to get better,” the Tigers coach said. “We weren’t in a very good mood coming back from UCLA. The whole week, it was about us attacking and us getting better.”

Cody Orgeron was sacked a total of eight times and McNeese managed just 67 total yards and netted 1.2 yards a play on 54 snaps in the first 3½ quarters before the Cowboys' only scoring drive.

“I was very pleased with our pass rush,” Ed Orgeron said. “I knew we were a good pass-rushing team, but obviously we’re going to face stiffer opponents down the road.”

He said the first couple of plays were weird going against his son, but that quickly changed.

“I knew Cody could handle it; I’ve seen his games and there have been some games where he’s been sacked a bunch,” he said. “He can handle it, he’s a big man. He knew it coming in. I’m just glad he didn’t get hurt.”

Ed Orgeron said he thought Smith rushed the passer effectively in the season opener last week and picked up where he left off against McNeese.

“Tonight, he dominated his man,” he said. “He’s a tremendous rusher inside. He’s 6-foot-5 and a very athletic player.”

Anthony, who had 5½ sacks all last season, said the Tigers had to do their job no matter who was taking snaps on the other side of the line.

“We knew it was him, but at the same time we treat everybody the same,” Anthony said. “He’s just another quarterback that we have to get to when he’s back there. No matter who it is, no matter who we play, we treat everyone the same.”

McNeese had three plays that accounted for 106 of their 142 total yards, which means the Cowboys gained just 36 yards on their other 59 snaps.

They punted on 12 of their 15 possessions, finishing with seven three-and-outs. One of their other series ended with a fumble.

LSU defensive tackle Jaquelin Roy caused McNeese running back Stephon Huderson to fumble and recovered it to set up his offense for a 28-yard touchdown drive that was capped by Max Johnson’s 3-yard pass to Kayshon Boutte.

That was all they needed, considering how the defense was playing.

McNeese avoided a shutout when Orgeron, who was 10 of 20 passing for 91 yards, hooked up with running back Carlo Williams on a screen that Williams took 44 yards to the end zone with 4:30 left in the game.

But it gave his son something to remember.

“I’m proud of our team, but at the end of the day, they’re bigger, faster, strong individuals,” Cody Orgeron said.

LSU won 34-7 as the defense dominated McNeese State, but it struggled offensively, doing little to assuage concerns about the offensive line and how the team will fare when it begins the Southeastern Conference schedule.