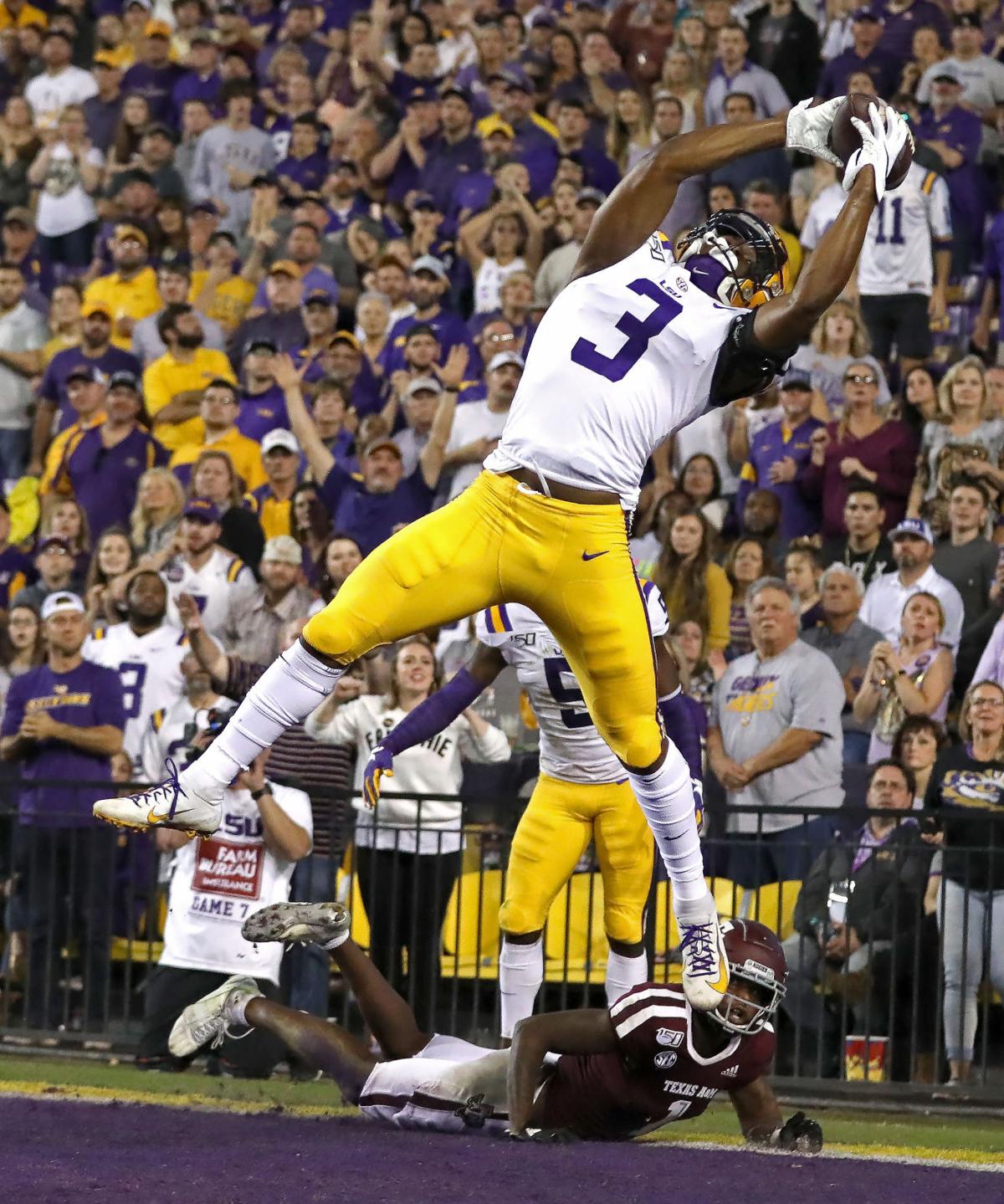 LSU safety JaCoby Stevens (3) pulls in an interception during the second half of the Tigers' 50-7 win against Texas A&M, Saturday, November 29, 2019 at LSU's Tiger Stadium in Baton Rouge. 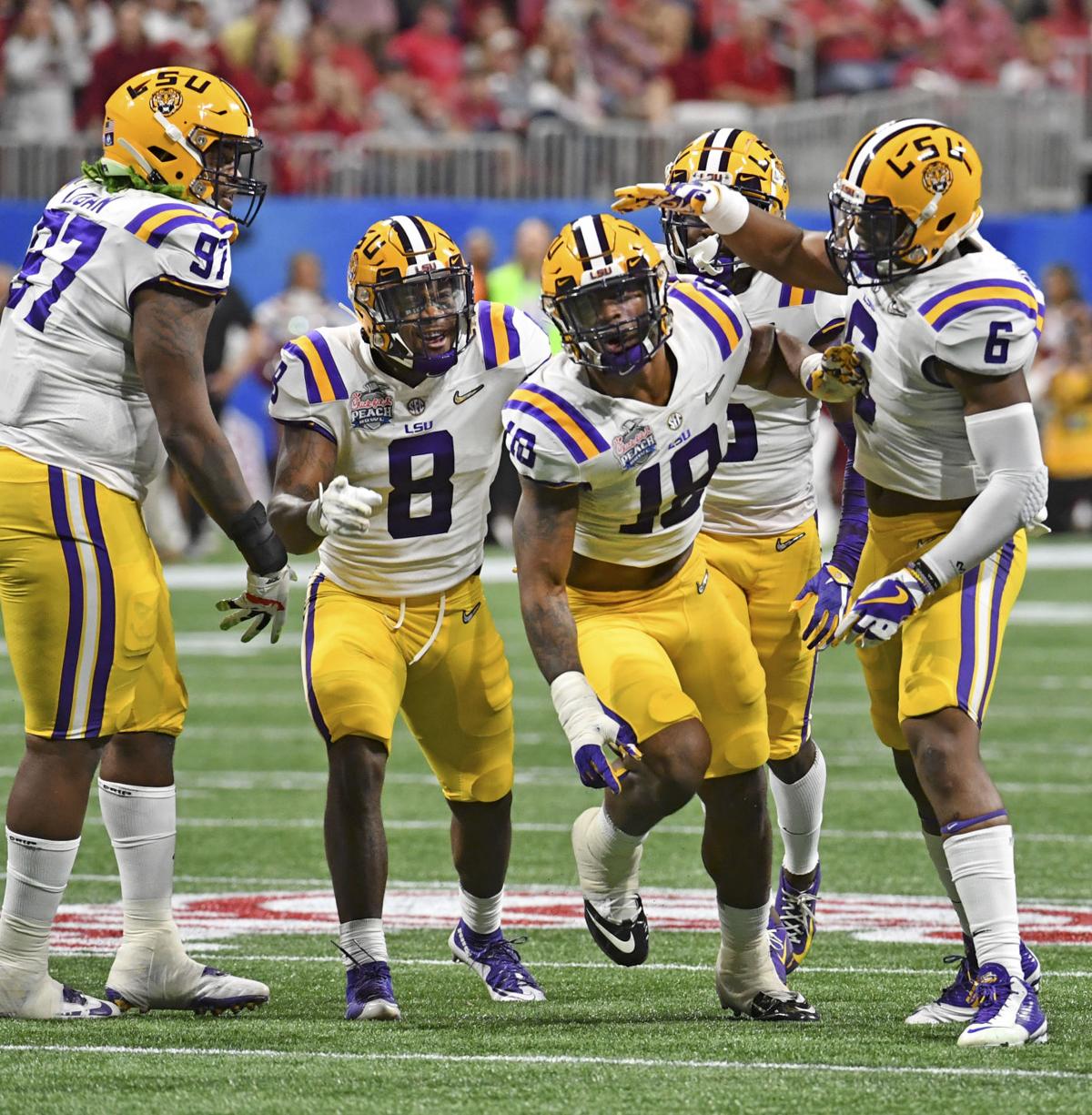 LSU linebacker K'Lavon Chaisson (18) celebrates with defensive end Glen Logan (97), linebacker Patrick Queen (8), cornerback Kary Vincent Jr. (5) and linebacker Jacob Phillips (6) after making a sack in the first half of the Chick-fil-A Peach Bowl between LSU and Oklahoma, Saturday, December 28, 2019, at the Mercedes-Benz Stadium in Atlanta.

LSU safety JaCoby Stevens (3) pulls in an interception during the second half of the Tigers' 50-7 win against Texas A&M, Saturday, November 29, 2019 at LSU's Tiger Stadium in Baton Rouge.

LSU linebacker K'Lavon Chaisson (18) celebrates with defensive end Glen Logan (97), linebacker Patrick Queen (8), cornerback Kary Vincent Jr. (5) and linebacker Jacob Phillips (6) after making a sack in the first half of the Chick-fil-A Peach Bowl between LSU and Oklahoma, Saturday, December 28, 2019, at the Mercedes-Benz Stadium in Atlanta.

As a young lad growing up in Tennessee, Stevens used to go out in his front yard and pretend to throw passes to himself in the national championship game.

A lot of kids these days are imagining the same thing. Being Heisman Trophy-winner Joe Burrow throwing a touchdown pass, or being Ja’Marr Chase or Justin Jefferson on the receiving end.

Maybe somewhere a kid is dreaming of high-pointing an interception like Tigers’ cornerback Derek Stingley, but if they’re out there they are not easy to spot.

It’s all about the LSU offense these days. Even after a season of a record-breaking offense that ranks No. 1 nationally in total and scoring offense, it’s not an easy concept to wrap one’s head around.

The perception of LSU football has flipped 180 degrees. And Tigers like Stevens have taken notice.

“The culture,” the LSU safety said, “has changed.”

LSU is playing to win its fourth national championship in program history next Monday against Clemson in the Mercedes-Benz Superdome (7 p.m., ESPN). The previous three were all marked in some way by defense.

In 1958, coach Paul Dietzel turned a band of third-stringers into a stingy band of defensive specialists known as the Chinese Bandits.

In 2003, a Nick Saban-crafted defense played at an elite level, with All-American defensive end Marcus Spears dropping into coverage for a pick-six that turned out to be the game-winning touchdown in the Sugar Bowl against Oklahoma.

And in 2007, when Burrow was an 11-year-old growing up in Ohio, he was probably a little bummed to watch LSU and Glenn Dorsey, who had swept up an armful of awards and honors, take out Ohio State in the BCS title game.

LSU’s reputation forever, it seems, has been predicated on defense. Even in the pros, where the school that loves to call itself DBU can point with pride to three of seven All-Pro defensive backs being from the bayou (Jamal Adams, Tre’Davious White, Tyrann Mathieu).

But the feeling going into this championship showdown is LSU is going to have to outscore Clemson — and the LSU defense will just have to do its best to hang on.

That’s a notion that doesn’t sit well with the Tigers' defense.

“I feel like we’re kind of trying to be selfish about it, but in a good way,” rush linebacker K’Lavon Chaisson explained. “This program has been known so much for defense, but we’ve been overshadowed by the offense. But now every day and every week we step on the field we want to let people know, and ourselves know, this still is a defensive school.”

You knew going into this season that if Burrow’s “40-50-60” points per game prediction for LSU’s offense would come true, there would be unprecedented pressure on the Tigers’ defense. That has certainly come to pass. LSU has given up 37 or more points four times this season, though it must be noted Vanderbilt got two defensive touchdowns in a 63-38 Tigers win in September.

The specter of being shredded by Ole Miss and quarterback John Rhys Plumlee for more than 400 yards on the gorund in a 58-37 win at Oxford in November still haunts LSU and still embarrasses the Tigers, to be honest.

But since then the Tigers, with a hardly coincidental improvement in production from Chaisson, LSU’s defense has improved. The past four games, which it must be said include a 56-20 demolition of struggling Arkansas, LSU has allowed a respectable 16.3 points per game. They gave up 28 to Oklahoma, but most of those points in the Peach Bowl came after LSU was well en route to a rout by a 63-28 total.

Oklahoma quarterback and Heisman runner-up Jalen Hurts and All-American receiver CeeDee Lamb were a test for LSU and had their moments. But perhaps nothing to surpass the test the Tigers will get from Clemson quarterback Trevor Lawrence, Jennings native Travis Etienne at tailback and the rest of their offense that is merely ranked third nationally in yards gained and fourth in scoring.

Howard's Rock? IPTAY? The Fridge? Get to know these 10 things about Clemson football

The similarities run deep between LSU and Clemson.

But there is a confident, can we say angry, edge to this LSU defense. In a game where both teams are looking to play the higher disrespect face card, the LSU defense seems to believe it’s holding the stronger hand.

LSU is going to give up yards and plays. Clemson is too good not to get its share. And this could turn out to be a game where both teams score in the 30s or even the 40s and it can be said the defenses played reasonably well.

But LSU’s defense has to get the big stop, the turnover, the pass breakup, the key sack. You know they are convinced if they make Clemson’s offense tap the brakes just enough the LSU offense will do the rest.

But Stevens and Chaisson and the rest sure wouldn’t mind making a Spears-like difference maker to turn the game LSU’s way.

“There’s no doubt in my mind our offense is going to keep playing like they’re playing,” Stevens said. “We have the best player in college football running our offense. I have 110% confidence in what they’re going to do.

At this point, it’s a lot about restoring pride in the LSU defensive brand. And attitude may count for an awful lot.

LSU vs Clemson: Key facts and storylines one week before the national championship

It will be all about the Tigers when No. 1 LSU faces off against No. 3 Clemson in the 2020 College Football Playoff National Championship game…