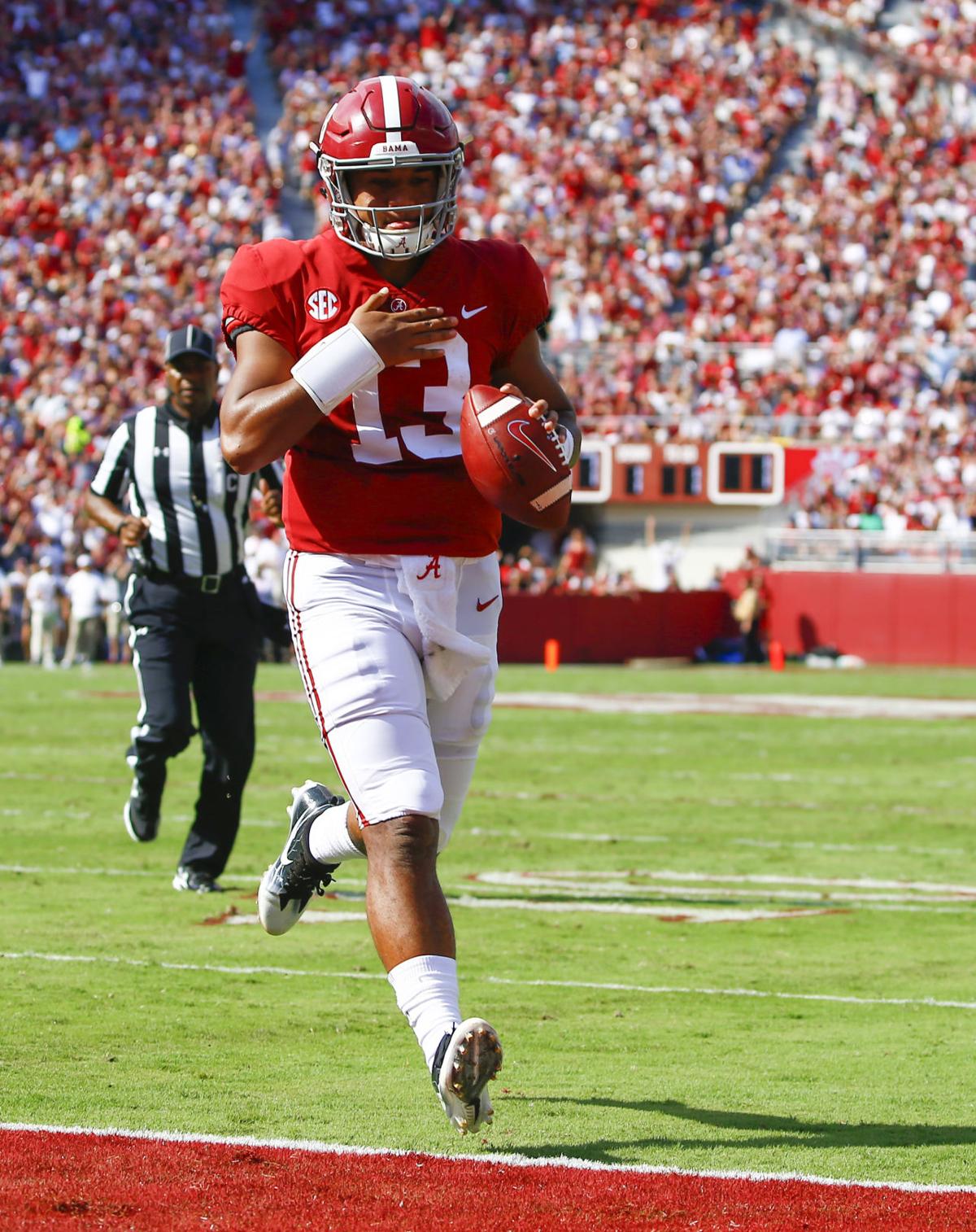 Alabama quarterback Tua Tagovailoa (13) runs in for a touchdown against Texas A&M during the first half of an NCAA college football game, Saturday, Sept. 22, 2018, in Tuscaloosa, Ala. (AP Photo/Butch Dill) ORG XMIT: ALBD109 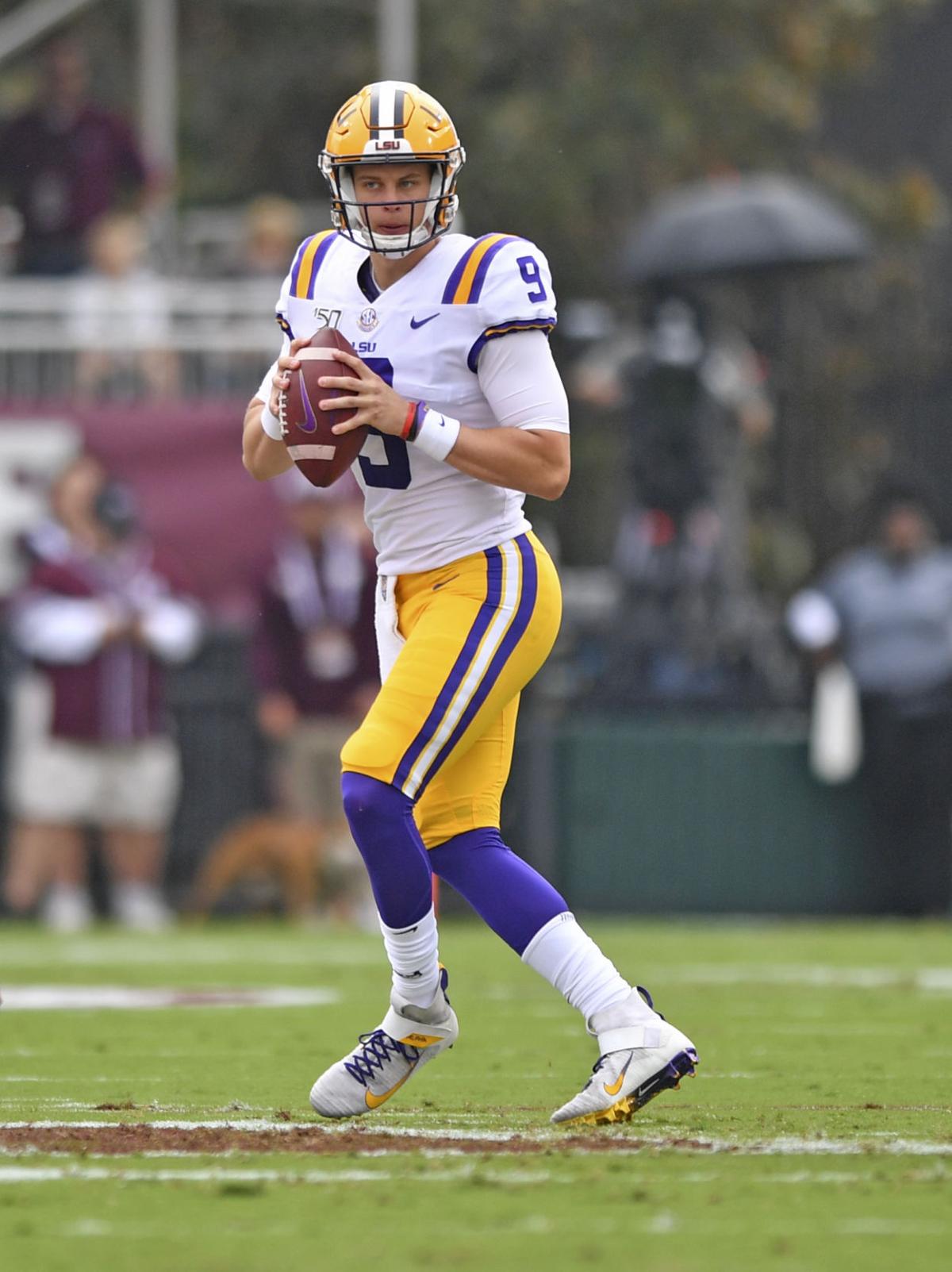 LSU quarterback Joe Burrow (9) drops back to pass in the first half against Mississippi State on Saturday, October 19, 2019, at Davis Wade Stadium in Starkville, Miss.

Alabama quarterback Tua Tagovailoa (13) runs in for a touchdown against Texas A&M during the first half of an NCAA college football game, Saturday, Sept. 22, 2018, in Tuscaloosa, Ala. (AP Photo/Butch Dill) ORG XMIT: ALBD109

LSU quarterback Joe Burrow (9) drops back to pass in the first half against Mississippi State on Saturday, October 19, 2019, at Davis Wade Stadium in Starkville, Miss.

For much of LSU’s eight-game losing streak to Alabama, there’s been a perception, and maybe some truth, that Alabama has had the clear edge at quarterback, whether it was Tua Tagovailoa or Jalen Hurts and others before them.

LSU coach Ed Orgeron said all championship teams he’s been a part of have been led by a great quarterback.

LSU vs. Alabama live updates: See what Ed Orgeron, players have to say after big win in Tuscaloosa

The top-ranked Tigers head to Bryant-Denny Stadium ranked No. 1 in the nation for the first time since the 2011 "Game of the Century," won by LSU 9-6.

Orgeron is glad that he has Joe Burrow as the Tigers head into one of the biggest games of both Orgeron and Burrow’s careers — against Tua Tagovailoa and the Alabama Crimson Tide.

“Whether he was very talented, whether he had grit and character or toughness, I think our quarterback has it all,” Orgeron said. “Obviously Tua is an outstanding quarterback. I think the one thing that you'll find with both quarterbacks that I know of, because I recruited Tua too; they're team players. It's about their football team, it's about winning, and they're unselfish. I think that's what makes both of these guys outstanding football players.”

Burrow has closed that gap at quarterback between the programs. He is second in the nation in yards passing with 2,805, second in touchdowns with 30 and leads the nation in completion percentage at 78.8.

Orgeron even called him a top-five recruit in LSU history.

Burrow and Orgeron know that there may be bigger games down the road, but they know the challenge that comes with facing Alabama.

Tagovailoa’s legacy was written on second-and-26 two years ago, when he threw a touchdown pass to win the 2017 national championship game in overtime against Georgia. He was the Heisman runner-up in 2018 and opened the 2019 season as the front-runner.

Can LSU's record-breaking offense finally outscore Alabama?; 'I want to believe it's the time'

TUSCALOOSA, Ala. — Peer through the gates of Bryant-Denny Stadium and there's a glimpse of where LSU last scored against Alabama.

Burrow has begun to write his legacy — a Fiesta Bowl win over Central Florida in 2018 and a game-sealing touchdown on third-and-17 at Texas earlier this season — but he has a chance to cement it Saturday in Tuscaloosa, as he looks to become the first LSU quarterback since 2011 to lead the Tigers to victory over the Crimson Tide.

Burrow has the opportunity to lead his team to a national championship from start to finish, but he has to go through Tagovailoa and Alabama first.

In his second year facing the Crimson Tide, Burrow is working to reverse one of his worst performances at LSU in a 29-0 loss to Alabama at home last season. Burrow was 18 of 35 for 184 yards and an interception in that game.

What nobody knew, not even most of Burrow’s teammates, is that he played through a shoulder injury that night. LSU center Lloyd Cushenberry said he did not even know about Burrow’s injured shoulder until reporters mentioned it to him.

“I guess he’s so tough, he hid it well,” Cushenberry said.

Rabalais: LSU has worked hard to change its fate, and not break, against Alabama. Will it work?

There is a saying: It is the fate of glass to break.

Orgeron said it was no surprise Burrow played through the injury. Burrow will play with any injury, no matter how severe, because that’s just the type of competitor he is.

Whatever happens on the field Saturday afternoon, Orgeron believes this game can and will influence the Heisman race between Burrow and Tagovailoa, even just a little.

“I’ve been a part of four Heisman winners,” Orgeron said. “I remember Carson Palmer (of USC) beating Notre Dame in a big game at the end and won the Heisman. I think it puts you on a national stage, and I think it helps you, and I do believe that obviously there are two big Heisman candidates. The one that plays the best and wins the game should have a shot to win it.”

What's at stake in LSU-Alabama game? For Louisiana politicians, it's Boudin, beer and fried chicken

WASHINGTON — There is a lot riding on the Tigers when they take on rival Alabama on Saturday — on and off the field.