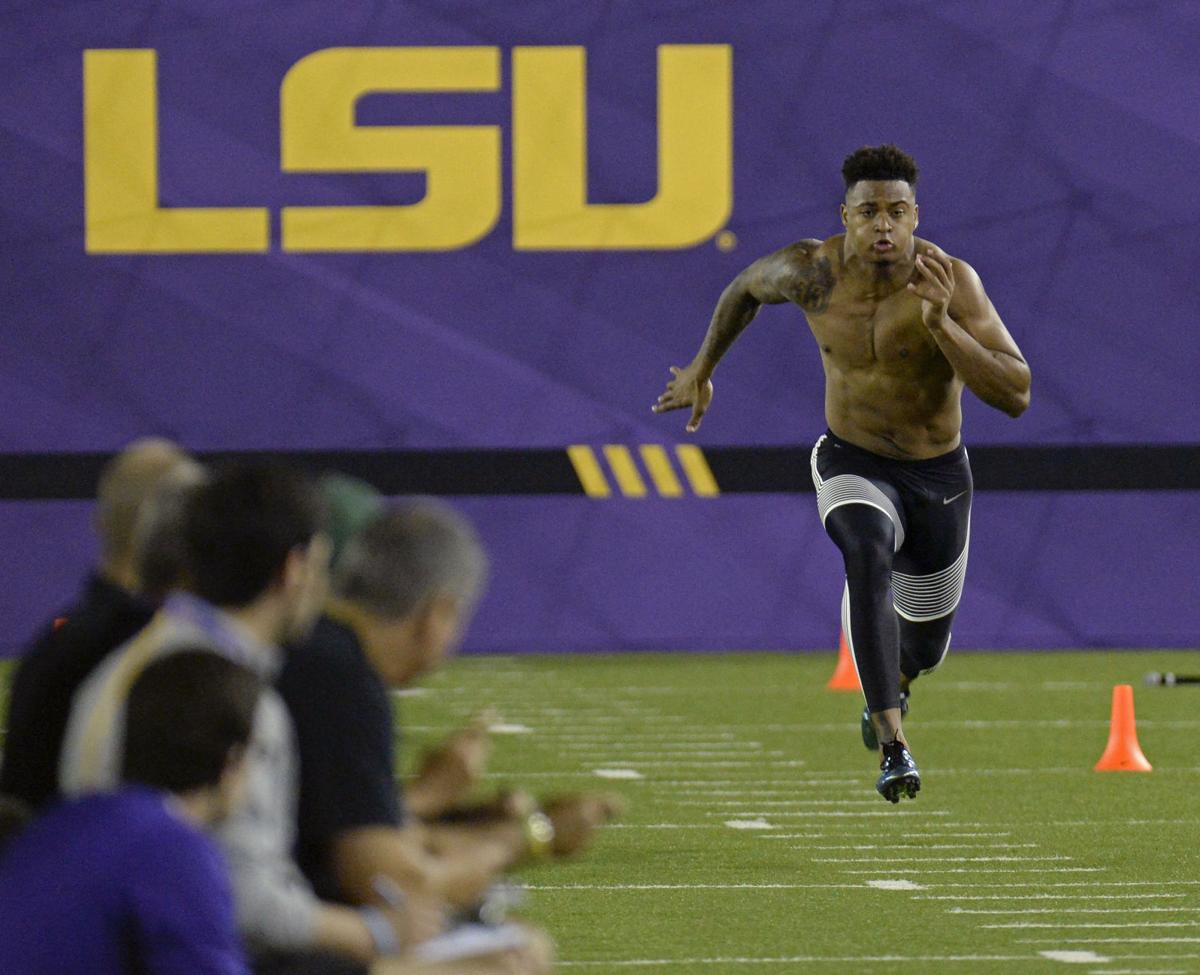 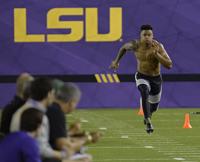 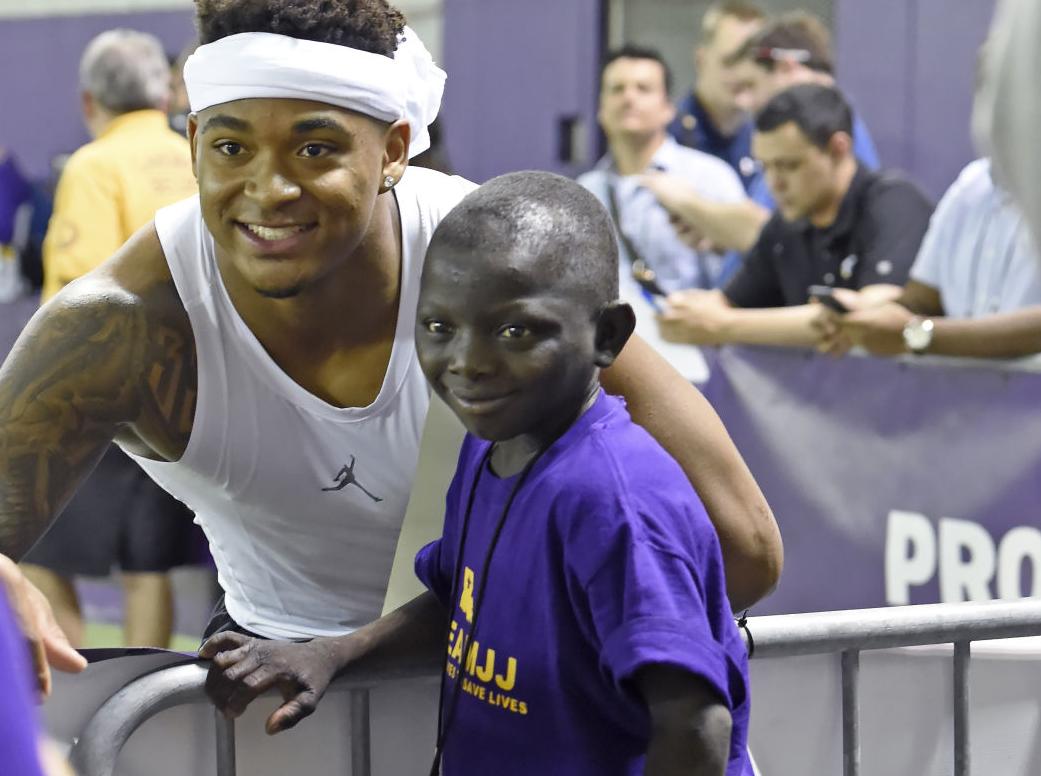 No, it’s true, his father said.

His son — the former All-American LSU safety — was that nervous ahead of his 40-yard dash at the NFL combine five weeks ago.

He had a good reason. Adams was the first defensive back called to run the premier event at one of the most-watched pre-draft happenings there is.

“When they called his name,” George Adams said, “he told me, ‘Dad, I was No. 1. When they said Louisiana State University No. 1 and they called (my name). … Dad I could have peed on myself.’”

He didn’t, of course, but he did run a 4.56-second 40-yard dash, a time that left him frustrated and well short of his practice runs.

He did one better.

Adams — free of those nerves — ran a 4.33 40-yard dash Wednesday at LSU’s pro day, capturing the buzz of this yearly event in the school’s indoor practice facility.

No one finished with a faster 40 time. Former LSU track national champion Cyril Grayson, competing at pro day, could only equal the mark. Adams’ score filtered through the crowd seconds after he completed the dash and before it posted on the large projection screen in the indoor facility.

“Coming into the combine, that’s what he told me he was going to run there,” receiver Malachi Dupre said. “He didn’t, but I know he’s run that before. I knew he was (that fast). It’s just a matter of doing it when the lights are on. He did.”

Matt Canada's LSU offense does indeed vary from one QB to another, Justin McMillan says

Matt Canada’s offense really does change depending on the quarterback.

He’ll soon be under much brighter lights, in the backstage green room waiting for his name likely to be called among the top 10 picks in the draft. Many projections have Adams going as high as third to the Bears. He only helped himself with that 40 time.

His 4.33 would have ranked second among defensive backs at this year’s combine and fourth among all players, though it was not timed with a laser as officials do at the combine. The blazing time drew national attention at, potentially, the largest pro day in LSU history.

More than 100 media members were credentialed, thought to be the most ever for the event, and close to 200 overall NFL personnel were expected.

Many were there to watch LSU’s trio of potential first-round picks: Adams, running back Leonard Fournette and defensive back Tre’Davious White.

Adams’ 40 time stole the show. It was all part of his plan.

“I felt like I was going to put on a show,” he said afterward.

This was no one-man show, though.

Fournette weighed in at 228 pounds, 12 pounds lighter than his much ballyhooed combine weigh-in of 240. He did not participate in any events, choosing to keep his combine marks. White's best 40 time Wednesday on two attempts was 4.47 seconds, only matching his combine mark.

That wasn’t the case for Adams, a Texas native who’s impressed NFL scouts during this pre-draft journey as much mentally as he has athletically. It came through during his post-pro day news conference, stepping in front of about 100 media members and delivering a confidence-filled, crafty message — all smiles for a room full of people who he referred to as “family.”

“He’s never been shy of the camera,” his father smiled.

'Still got a far way to go': After an unexpected spring practice debut, LSU's Will Clapp not rushing full return

Will Clapp admits he begged coaches to let him participate in an LSU spring practice.

George watched his son shine in front of cameras and recorders, launching into his dreams and aspirations from behind the podium of LSU’s team room.

For instance, Adams wants to be the highest drafted safety ever, he said, something he’s been gunning for since his junior season of high school. Eric Turner went second overall in 1991.

There’s never been a better time to pick a safety inside the top five in this changing game of football, he said. He’s the right guy, too, he insisted, pointing to his versatility as a potential do-it-all man on defenses that are rapidly changing to match their more pass-happy and aggressive counterparts.

“The game is changing to where tight ends are more like receivers. They’re running receiver routes. (Teams are) coming out in spread, different personnel to make the safety come out of the single high and come cover, come in the box and bang a little bit. I feel like I’m versatile,” he said.

“I can play everything,” Adams continued. “I can blitz, cover in the slot, sit at 20 yards and go sideline to sideline. That’s what separates me from the other defensive guys in the draft. There’s tons of talent in the draft. Hopefully, I make history.”

Later, he wants to be a Hall of Famer, he said, hopefully slipping on that yellow jacket in front of some of the same faces he saw Wednesday. “Hopefully some of you guys are there in the audience,” he said.

He attributed the drop in his 40 time — 4.56 at the combine to that 4.33 — to “technique,” specifically staying low at the start. He surprisingly chose not to attempt to improve his vertical jump of 31.5 inches from the combine, one of the lower marks of any defensive back at the event.

When questioned about it, he smiled. “I can dunk a basketball.”

The next step on this pre-draft journey includes visits to team facilities, he said. Adams is visiting the Jaguars on Thursday. He’ll visit the Bears and the Titans, too, his dad said, along with “everybody that’s going to pick in the top 10.”

The draft is very much on everyone's mind, of course. It begins in just 22 days, April 27-29, in Philadelphia.

Adams admits to being an emotional guy, something that often flashed at Tiger Stadium after a game-changing play – his interception last season against Alabama, for instance, or his sack late against Ole Miss three years ago.

He’s so emotional, he said, that he expects to cry at the draft, surrounded by family, friends and former coaches, including Ed Orgeron (Adams invited Orgeron to join him in the green room).

He’s emotional about his father, too. He picked on his old man Wednesday, some revenge for dad doing the same after his son's 40-yard dash at the combine.

Said Jamal on Wednesday: “Got him.”

Leonard Fournette’s most important event — and, really, the only one he participated in Wednesday at LSU pro day — was stepping onto a scale.

With improved 40 time, Malachi Dupre out to prove he's a lot more than meager LSU production

Malachi Dupre had heard about some of the “off-the-wall” questions that some NFL prospects receive during the pre-draft process. Nothing he wa…

Video: The top 3 LSU draft picks since 2000? A trio of Tigers speedsters

Any sort of LSU draft pick rankings can be a tough endeavor, but one outlet has attempted to do just that; now feel free to tear it apart.

No one can say LSU's Jamal Adams doesn't aim high.