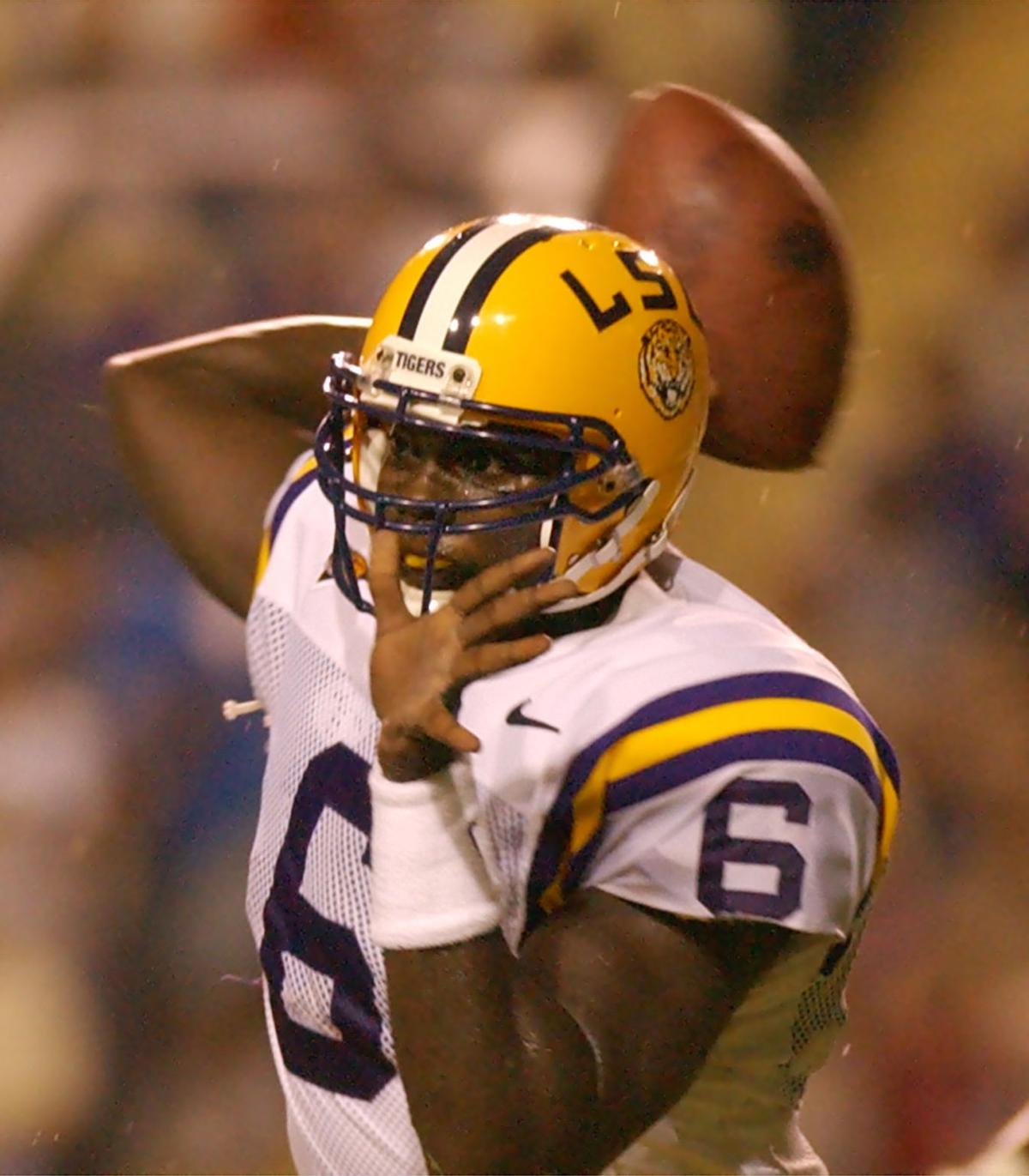 Advocate Staff Photo by Travis Spradling. DIT. Picture shot on 9-1-01. LSU quarterback Rohan Davey draws a bead on a receiver agaisnt Tulane in the first half. 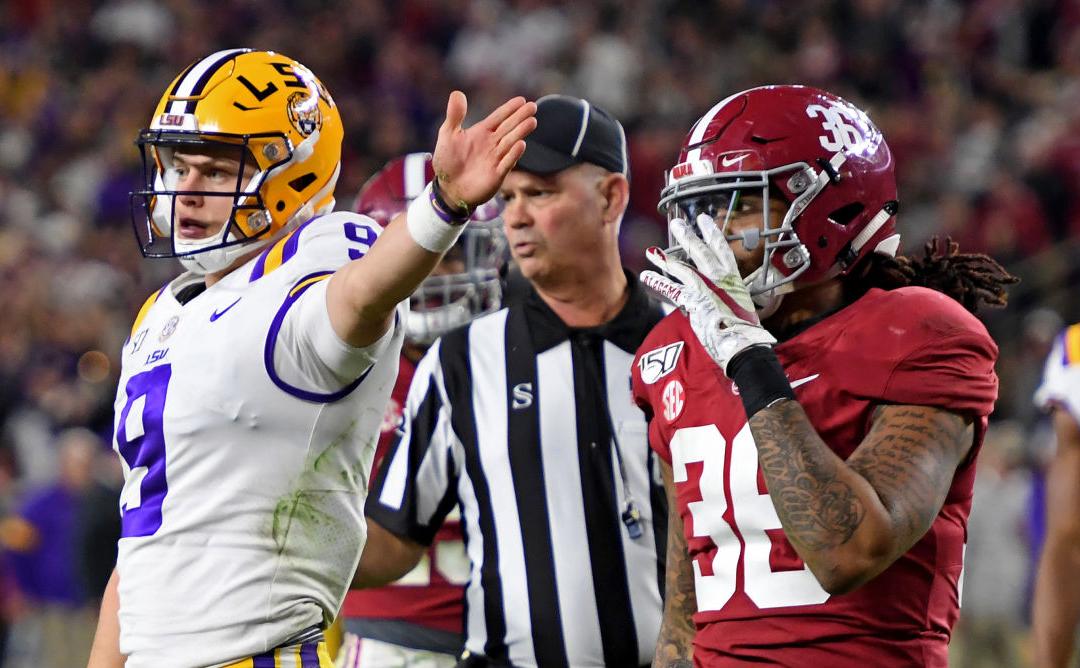 Advocate Staff Photo by Travis Spradling. DIT. Picture shot on 9-1-01. LSU quarterback Rohan Davey draws a bead on a receiver agaisnt Tulane in the first half.

Inside his home last Saturday, a former LSU quarterback watched one of his school records fall. He had owned it for almost two decades, but when Joe Burrow inevitably snapped it against Ole Miss, he stood up and clapped.

“I knew that record was going to get broken at the end of last year,” said Rohan Davey, who played quarterback at LSU from 1998-2001.

After he assembled one of the greatest seasons in school history in 2001, Davey graduated with LSU records in single-season passing yards, completions, attempts, yards per game and 300-yard performances. He still has the Tigers’ only 500-yard passing game.

But watching Burrow obliterate records this season, Davey knew when LSU played Ole Miss, his most recognizable accomplishment — the single-season yards passing record of 3,347 — would drop. Probably by halftime.

Heisman watch: The award is in LSU QB Joe Burrow's grasp if he can do these two things

For a guy who was 200-to-1 to win the Heisman Trophy this summer, Joe Burrow is a stunningly overwhelming favorite now. BetOnline.ag puts him …

Burrow entered the weekend at 3,198 yards this season despite not playing in the second half of several games. He needed 150 yards against the Rebels to break Davey’s mark. He did it with less than two minutes remaining in the first quarter.

A few hundred miles away in Baton Rouge, Davey gave him a standing ovation. Then, he prepared a congratulatory message, which LSU football released on its Twitter account the next day.

Davey’s records have fallen, pushing his name further down the school’s all-time lists, but he does not resent Burrow’s accomplishments. He has enjoyed this season, one that has LSU one win from playing for the Southeastern Conference championship, as much as anyone. He wants Burrow to win the Heisman Trophy and the national championship.

“These things are meant to fall, and I'm glad that Joe is the one with the year that he's having,” Davey said. “Smash them all. This is his year.”

Davey and Burrow have developed a friendship and mutual respect since Burrow arrived as a transfer from Ohio State. They met through LSU’s athletic trainers and coaching staff, and Davey soon noticed a quarterback who possessed traits he associated with success.

Quarterback Joe Burrow answered questions from reporters on Monday afternoon, two days after he had broken the school record for passing yards in a season and led LSU to a win over Ole Miss.

Burrow ran sprints with skill position players. He flashed competitiveness, leadership and toughness, qualities that have launched Burrow up draft boards and to the front of the Heisman Trophy race. The first time they met, Davey told Burrow to reach 4,000 yards passing.

Davey, who played professional football and now works in sales at Sorrento Lumber while operating a catering business called Quick 6 Catering, has often stopped by the LSU football operations building this season. He and Burrow sometimes talk about football and life.

The game has changed, but Davey gives advice when he can. He also encourages Burrow — and the rest of the Tigers — to enjoy this moment. He regrets not appreciating his 2001 season enough when he lived it, and here the Tigers are, within sight of playing for titles.

“He knows anything he needs of me, he can call me and ask me and I'll do it,” Burrow said. “He's a legend here. Anything he wants of me, he's got it.”

In Davey’s opinion, Burrow has cemented himself as the greatest quarterback in LSU history, and two games still remain in the regular season. Burrow has broken at least 10 school records and led LSU to the top spot in the College Football Playoff rankings for the first time.

On pace for 5,530 yards and 57 touchdowns if LSU reaches the national championship, Burrow may complete the greatest statistical passing season for a quarterback in SEC history, much less at LSU. Davey’s statistics, which did not include the postseason, pale in comparison. He doesn’t care.

“I want to see him reap everything that he can possibly get out of this,” said Davey, who booked a hotel room for the national championship over a month ago. “The No. 1 draft pick. The first quarterback taken. Everything that he's worked so very hard to get. I want him to get it all, man.”

As LSU nears the end of the regular season, one of Davey’s records remains untouched: 528 yards passing in a game, which he set against Alabama during his own magical year almost two decades ago.

Burrow has eclipsed 400 yards passing twice this season. He neared 500 against Ole Miss. And though Davey has spent a year encouraging Burrow, supporting the quarterback who has surpassed his own statistics, he felt some relief when his record stood — at least for one more game.

Joe Burrow owns most of LSU record book; here are 3 all-time NCAA records he could break