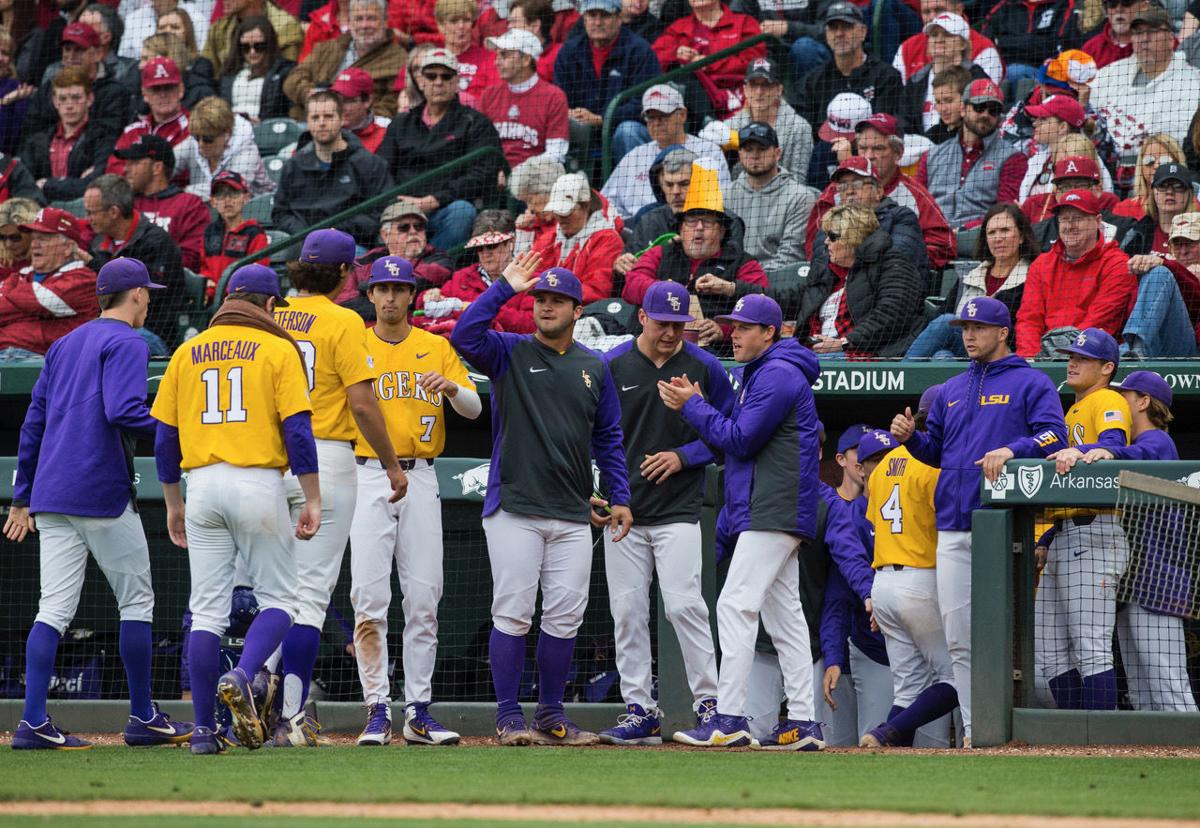 NWA Democrat-Gazette/BEN GOFF @NWABENGOFF LSU players return to the dugout after a double play to end the 6th inning vs Arkansas Saturday, May 11, 2019, at Baum-Walker Stadium in Fayetteville. 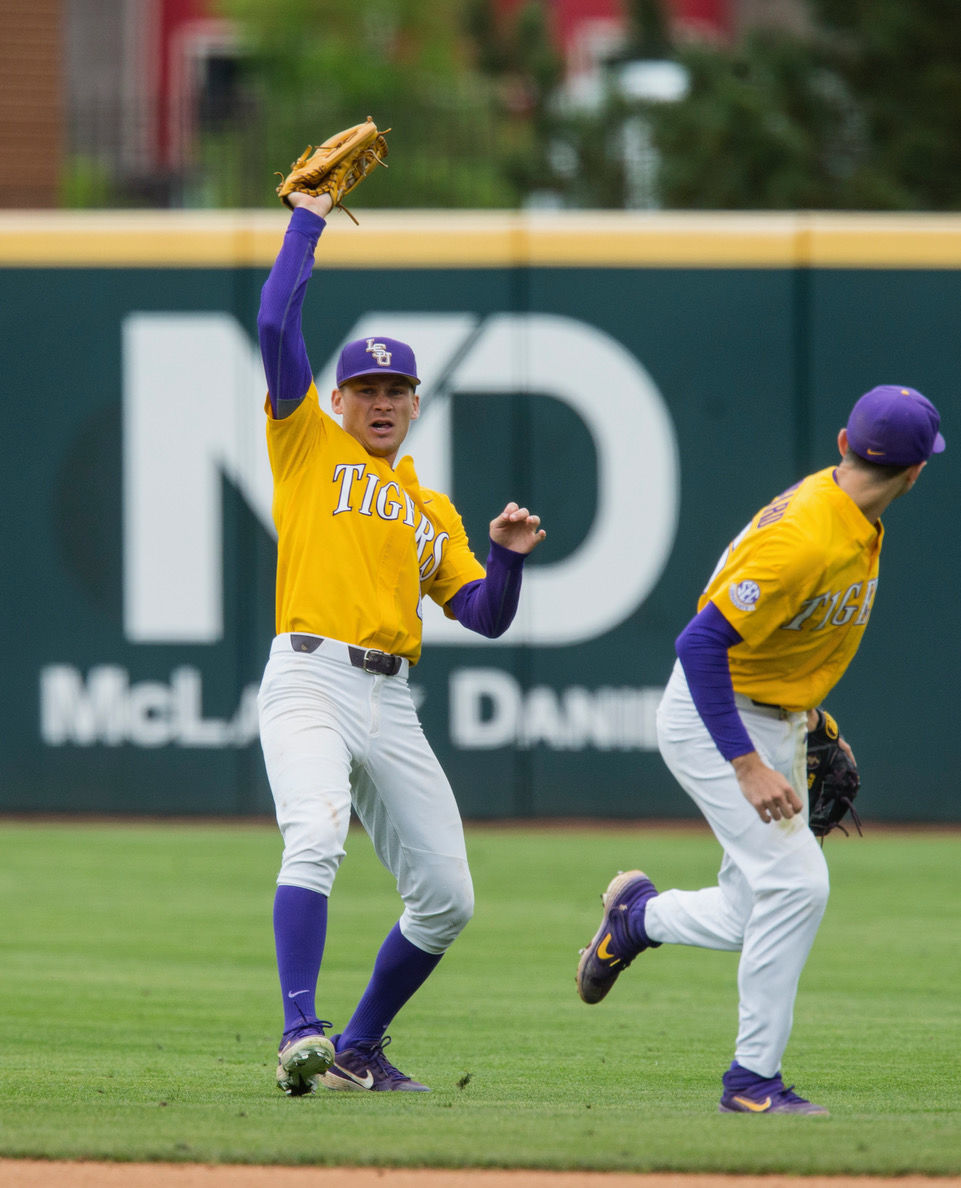 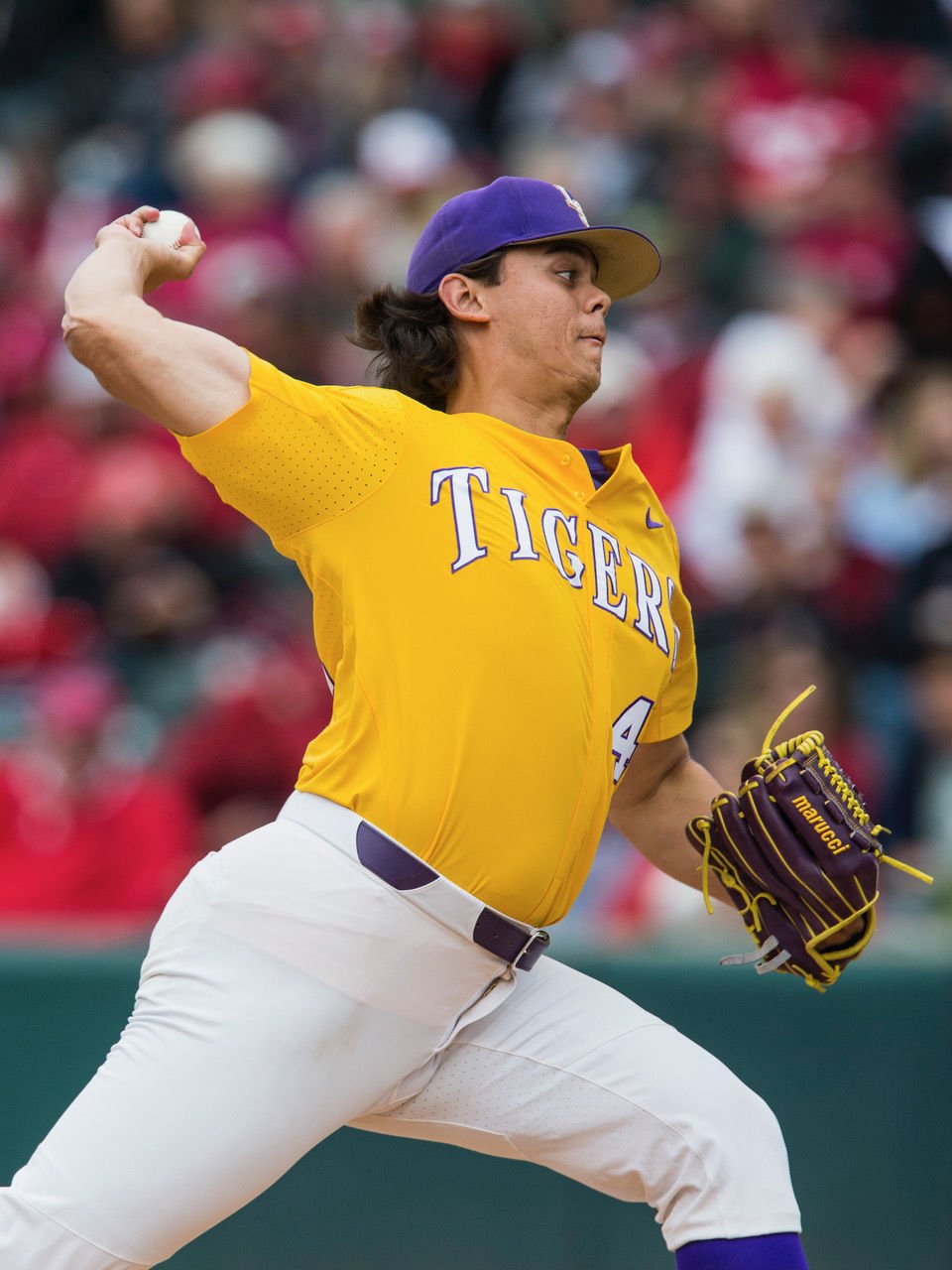 NWA Democrat-Gazette/BEN GOFF @NWABENGOFF Todd Peterson pitches for LSU in the 6th inning vs Arkansas Saturday, May 11, 2019, at Baum-Walker Stadium in Fayetteville.

NWA Democrat-Gazette/BEN GOFF @NWABENGOFF LSU players return to the dugout after a double play to end the 6th inning vs Arkansas Saturday, May 11, 2019, at Baum-Walker Stadium in Fayetteville.

NWA Democrat-Gazette/BEN GOFF @NWABENGOFF Todd Peterson pitches for LSU in the 6th inning vs Arkansas Saturday, May 11, 2019, at Baum-Walker Stadium in Fayetteville.

FAYETTEVILLE, Ark. — Hearts pounding in their chests, the players in LSU’s dugout waited to celebrate. Frustration and angst and disappointment had filled the past week as they lost five straight games.

But here, on Saturday afternoon at Baum-Walker Stadium, they waited for the ending of a 3-2 victory.

Arkansas had the winning run in the batter’s box with two outs in the ninth inning. On the mound stood junior Todd Peterson. He had escaped a bases-loaded jam when he entered in the sixth inning. At 59 pitches, it was already his longest outing of the season.

Peterson reared back, and his final throw smacked into the glove of catcher Saul Garza without a swing. Strike three. LSU’s players ran of the dugout and in from their positions, celebrating once again. They had beaten Arkansas, the No. 5 team in the country, and avoided a sweep.

Peterson was the hero on the mound, while Antoine Duplantis was the hero at the plate. His three-run home run in the eighth inning provided LSU's only runs and was the game-winner.

The Tigers' defense saved multiple runs behind Marceaux. When the Razorbacks (39-13, 19-8) put two runners in scoring position in the second inning, third baseman Hal Hughes caught one in a rundown between home plate. Marceaux induced a fly ball to end the inning.

“I can't give Landon enough credit for working his butt off the whole game,” said Hughes, who had three hits.

Peterson induced a ground ball from the next hitter. Second baseman Brandt Broussard fielded it, and his throw home beat the lead runner. The bases remained loaded with one out. Arkansas had blown open the past two games in similar situations.

The next Arkansas batter hit a grounder to Hughes. He threw to catcher Saul Garza, who tagged home plate and threw to first base for a double play that ended the inning.

Still, LSU’s offense continued to struggle. That changed in the eighth inning. With Hughes and Broussard on base with one out, Duplantis waited through a pitching change.

The second pitch of the at-bat came high and inside. Duplantis turned on it. The ball floated through the air. Duplantis didn’t think he made good contact. But Arkansas’ right fielder kept backing up.

The ball landed in the bullpen. Duplantis had popped out with a runner in scoring position his previous at-bat and banged his helmet in disgust. This time, his ninth homer gave LSU a one-run lead.

“Honestly, I capped it,” Duplantis said. “I was running down the line and I said a curse word. Then it ended up going over.”

Shortstop Josh Smith jumped over the dugout railing. The players yelled. They gathered outside the dugout and waited for Duplantis.

The Tigers' recent losses had felt devastating, Duplantis said. After his home run, they had a chance to win a conference game on the road and gather some momentum for the last four games of the regular season.

"This was unbelievably huge," Duplantis said. "We've got to keep building off this."

Peterson threw two more shutout innings to close it. He walked a batter in the ninth with one out, but a fly ball and a strikeout ended the game. LSU had stopped its losing streak.

“I know a lot of people have written us off,” Mainieri said, “but I haven't — and neither have our players.”

3 takeaways from LSU baseball's series at Arkansas: Still on the ropes, but reasons for hope?

Three takeaways from LSU baseball's series against Arkansas. The Tigers lost twice, then they ended a five-game losing streak.