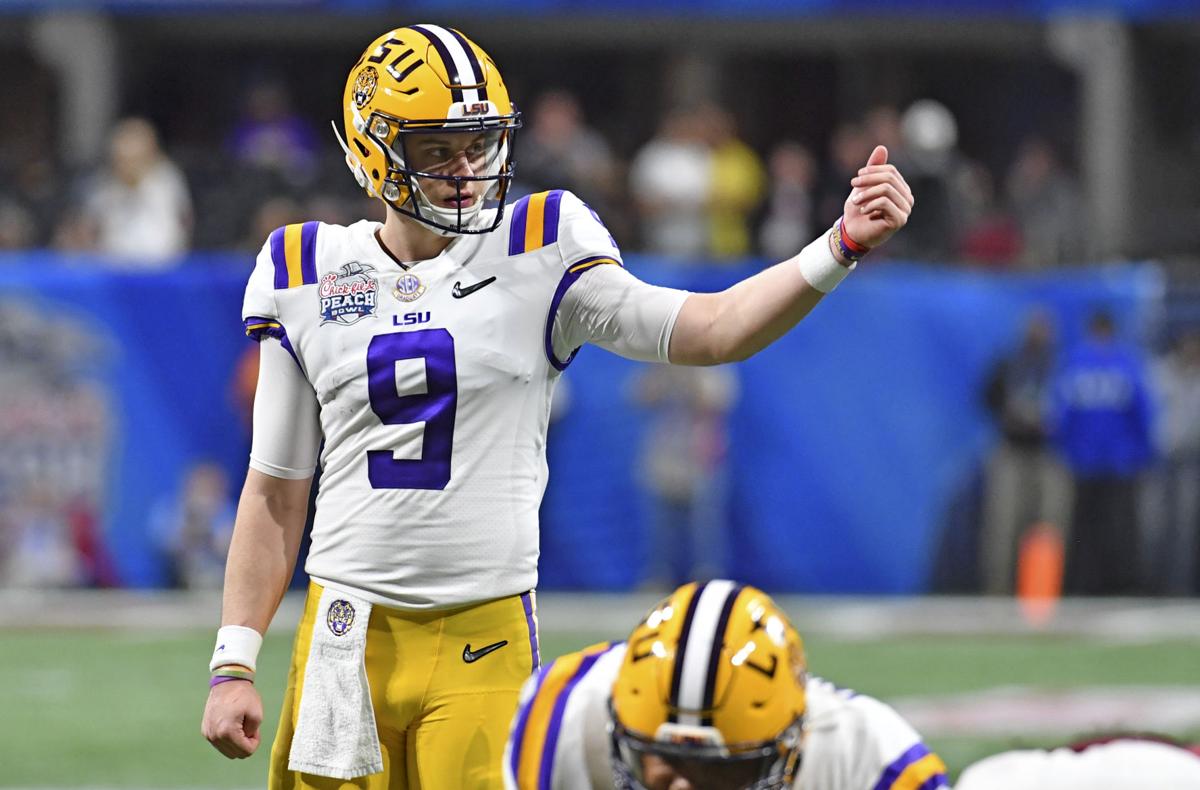 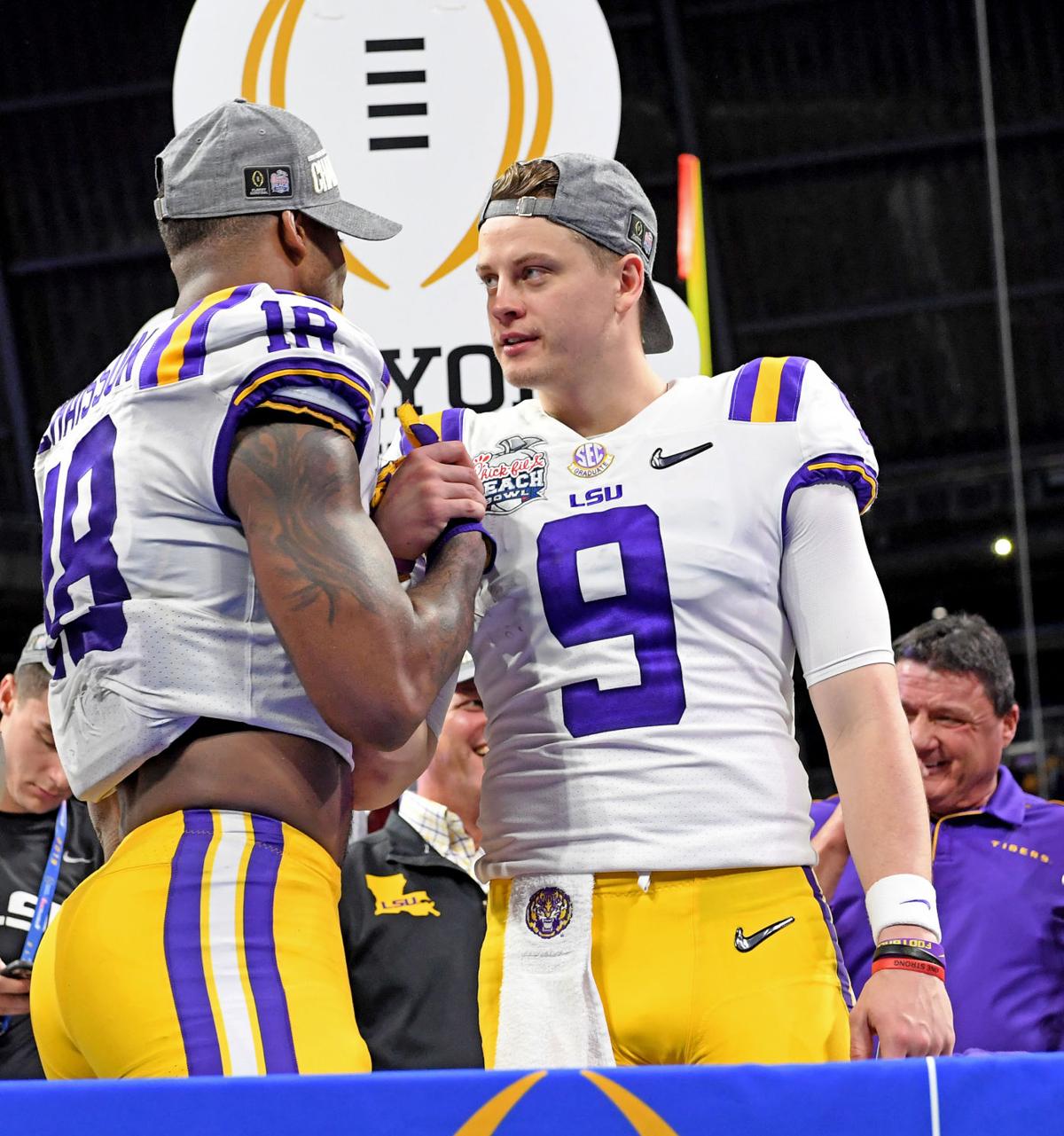 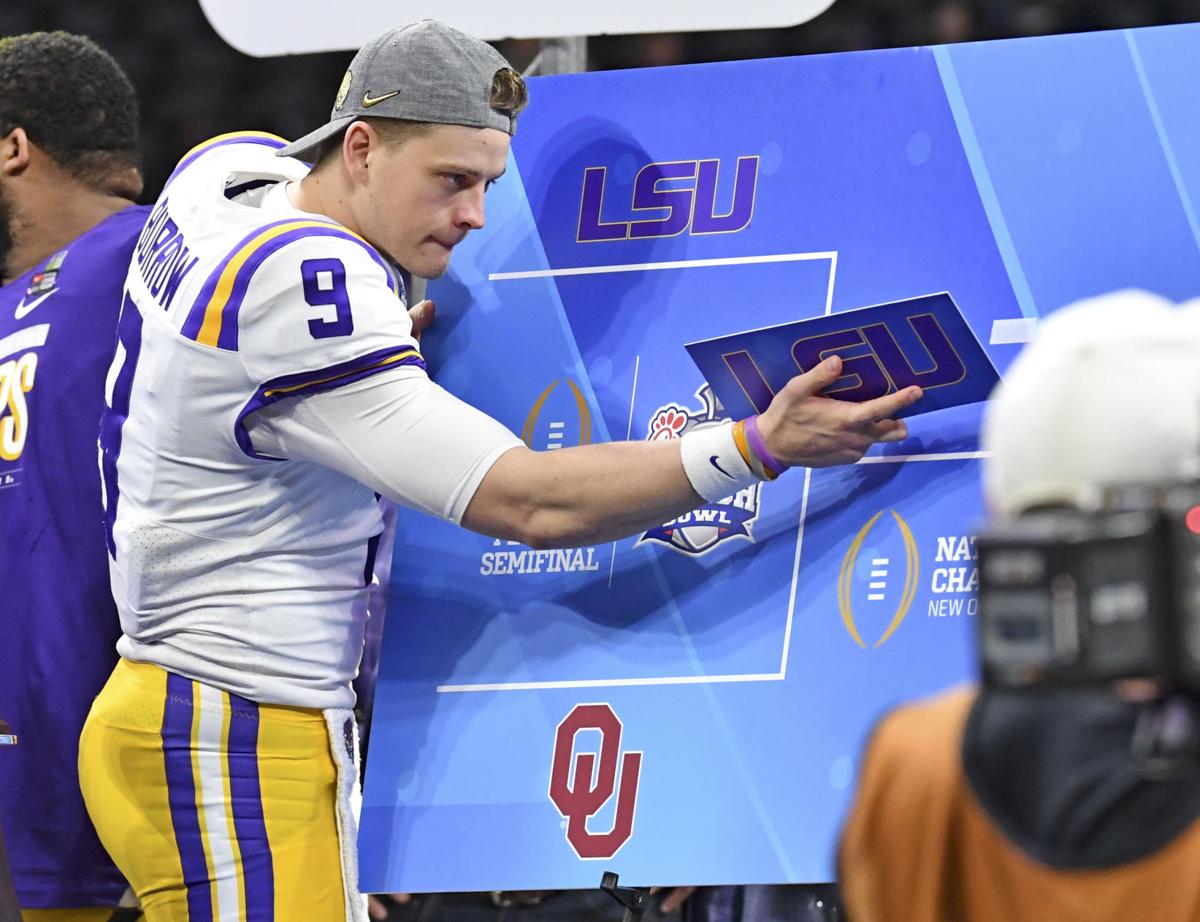 LSU quarterback Joe Burrow (9) adds LSU to the championship bracket as the Tigers celebrate their 63-28 win over Oklahoma in the Chick-fil-A Peach Bowl, Saturday, December 28, 2019, at the Mercedes-Benz Stadium in Atlanta, Ga. LSU will now compete in the National Championship.

Much like his childhood idol Drew Brees, Joe Burrow is headed to the Mercedes-Benz Superdome with a chance to beat some Colts and break some major records.

But Burrow won't reflect on anything about his season quite yet, even after a masterful demolition of Oklahoma in the Peach Bowl that saw him break his own LSU record of touchdown passes in a game, all seven coming in the first half.

LSU has been rewriting the record books all season faster than the ink can dry -- and that was especially true in a Peach Bowl rout of Oklahoma.

"I think that will be a question after January 13th," he said. "I'm not reflecting on anything right now. We're full steam ahead, getting back to work."

But it just so happens that date is likely to include two of the most illustrious records yet as LSU's star quarterback takes his shot at a perfect season.

His numbers in the Tigers' 63-28 rout of Oklahoma set him ahead of the pace needed to surpass Brennan's single-season touchdown record, set with his 58 scoring passes as Hawaii's quarterback in the 2006 season. Burrow threw touchdowns 49-55 of his season against Oklahoma. He'll need three touchdowns to tie the record and a fourth to break it; he's averaged 3.9 per game over his 14 games this season.

He'd need four total touchdowns to tie Brennan's mark for touchdowns responsible for at 63. Burrow's four rushing touchdowns on the season leave him at 59 total -- and he does have the caveat of getting one more game than Brennan's 14.

But while Burrow has work to do to catch those records, he's close to a lock to beat out another Colt's record: Completion percentage in a season.

Burrow currently owns a mark of 77.6% through 14 games (371 of 478), a full point ahead of the NCAA record set by the former Texas quarterback in the 2008 season. If Burrow matches even his season-worst mark for efficiency, 27 for 38 (71.1%) against Utah State, he would still easily surpass McCoy. A mark in the range of 65% percent against Clemson -- depending on the number of passes attempted -- could leave the LSU senior short, however.

Burrow held a more commanding lead heading into the stretch run, but has seen his percentage dip with a trio of, by his standards, less efficient games. Those have come in some of the most lopsided games of the season for LSU, with the Tigers outscoring its opponents 150-45 in that span.

It's LSU vs. Clemson

The matchup of Tigers -- and Death Valley legitimacy -- is set: The No. 1 LSU Tigers will face the No. 3 Clemson Tigers in the College Footbal…

Against Texas A&M, Georgia and Oklahoma, Burrow has gone 80-for-109 (73.3%), dropping his season-long completion percentage from its high-water mark of 78.8% after LSU's defeat of Arkansas. He's also thrown for 1,194 yards, 14 touchdowns and no interceptions in those games.

If Burrow adds one or both of those NCAA marks to his collection, they'll join an ever-growing list of accolades, which includes most of the Tigers' quarterback records. Burrow has nearly doubled LSU's record for touchdowns in a season -- which JaMarcus Russell and Matt Mauck had held at 28 before this season -- and he surpassed Tommy Hodson's record for career passing touchdowns in just 27 career games. Hodson played four seasons and 44 games at LSU to accrue his 69 passing touchdowns, which stood as the record for more than three decades.

It's been a season-long run of performances even coach Ed Orgeron has said it's difficult to step back and truly appreciate.

"To see what those guys are doing out on the field, and me being a football fan, I'm kind of a fan. I'm like hey, go ahead, guys. Way to go, man," he said after his team's win in the CFP semifinal. "It's incredible what this coaching staff has done, what these players have done, the connection that they have with the receivers."

But there is one LSU record Burrow has yet been unable to touch, protected somewhat by big leads like the Tigers had in the Peach Bowl that have spurred backup Myles Brennan in games to close out lopsided results. That mark: Most passing yards in a single game, held by former LSU quarterback Rohan Davey with his 528-yard performance in 2001 against Alabama.

Burrow has pushed close to that mark several times this season but is yet to topple it. Burrow's best chance came in the Peach Bowl, where he rolled up 493 yards in three quarters before handing over the reins to Brennan. The performance marked Burrow's third 400-plus-yard passing game on the season, and he's recorded more than 300 yards in all but two games.

Burrow's early exits will likely prevent him from pushing the all-time, single-season yardage mark -- held by former Texas Tech quarterback BJ Symons, who put up with 5,833 yards in 2003. With one game remaining Burrow has 5,208 yards. The total easily sets new LSU and SEC records, but leaves him needing 625 yards against Clemson to match Symons' mark.

John Lett has been an LSU football fan for decades, ever since he moved from Missouri to Baton Rouge to get his degree from the college. And e…

Burrow's current pace projects him to finish with 5,580, which would be good for No. 5 all-time in a single season.

But there's no more games to rest for after New Orleans -- at least not at the college level -- and after winning a Heisman trophy and basically everything else on the road to a title shot in the Superdome, it's likely no record is safe.

Especially considering Burrow's assessment of his latest record-setter, and what that could mean if he finally leaves the field with what he's looking for.

"We think we need to score every time we touch the ball," Burrow said, clearly less than enamored with his seven-touchdown day.

"If we don't, then we're still kind of chasing that perfect game."

Do you remember ever having more fun watching LSU football than this season?