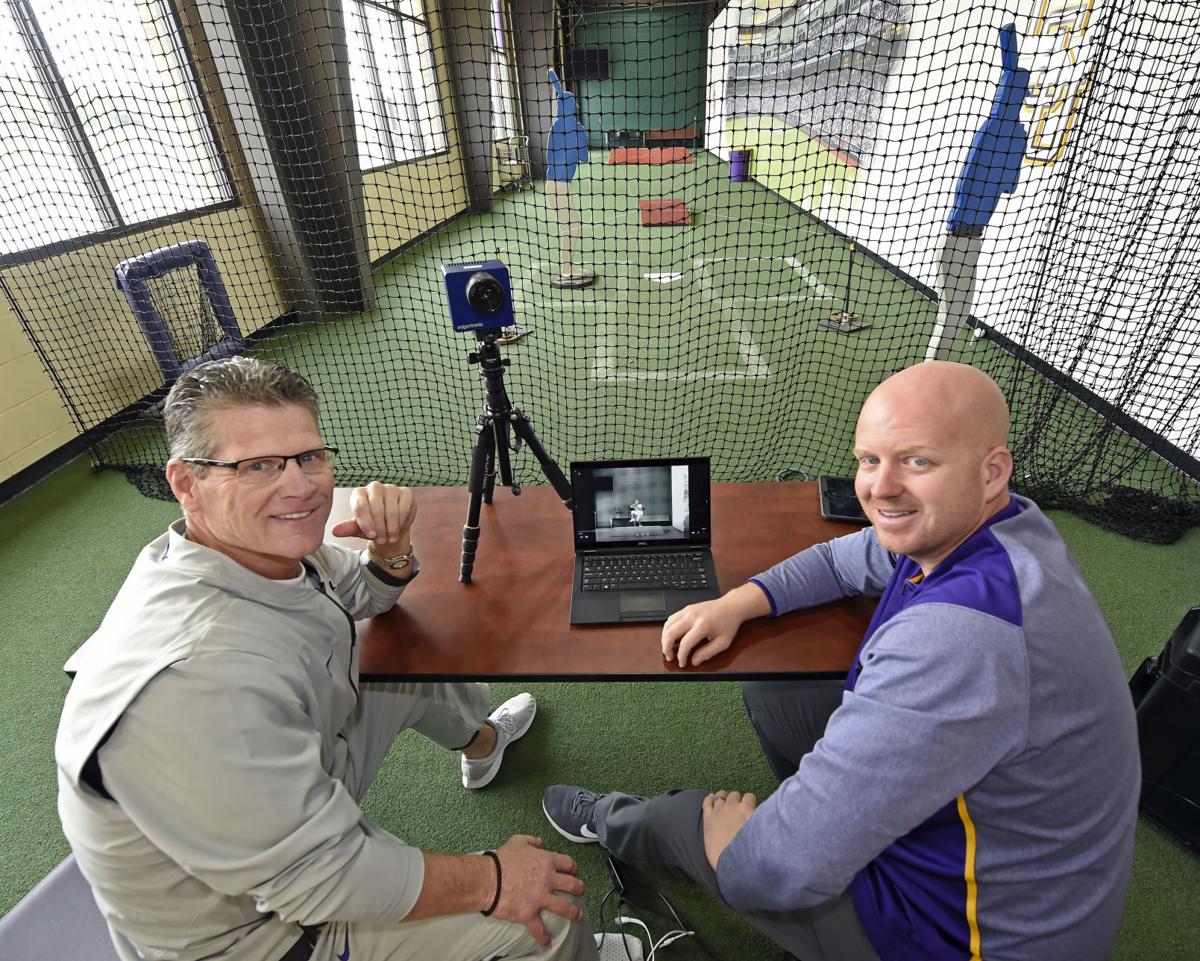 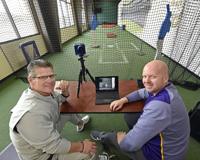 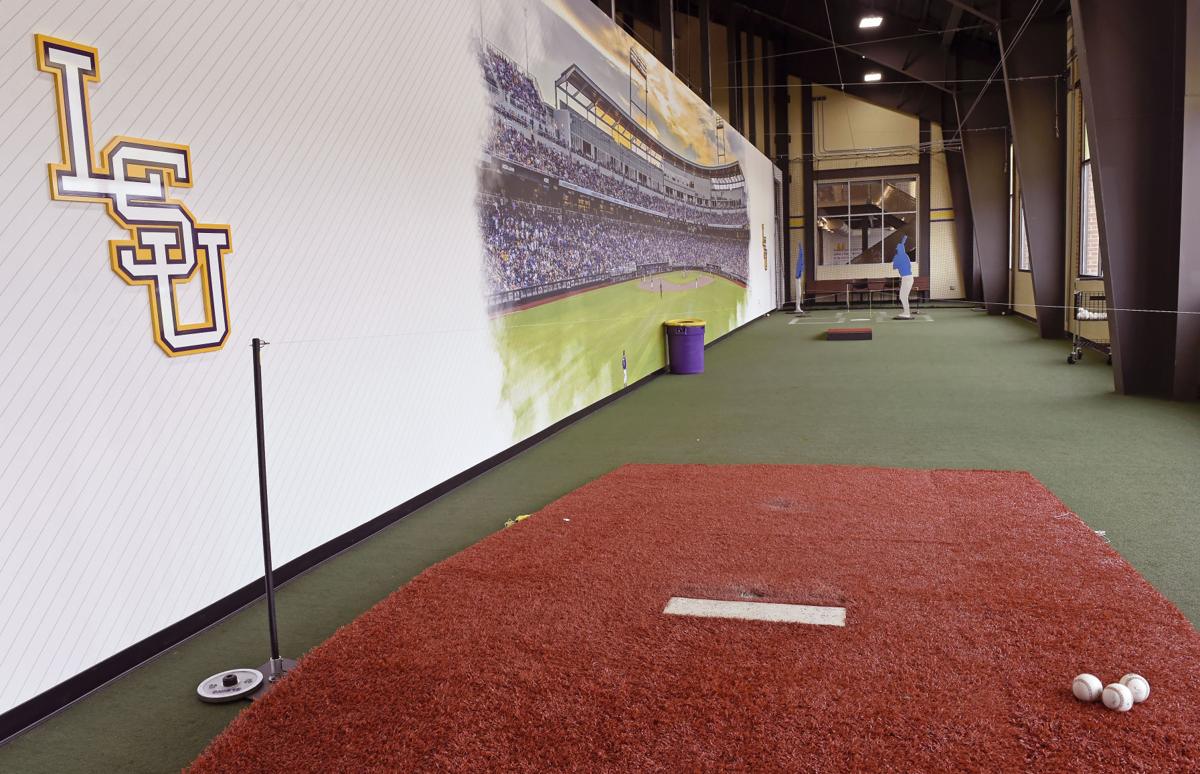 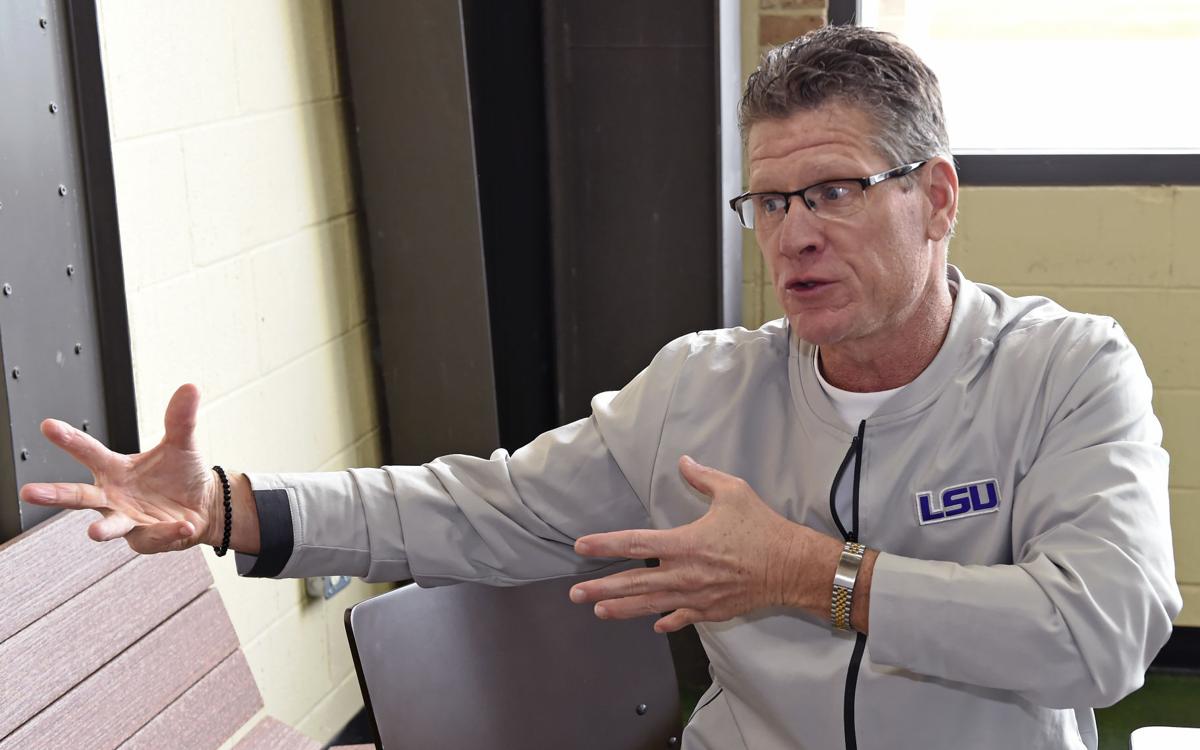 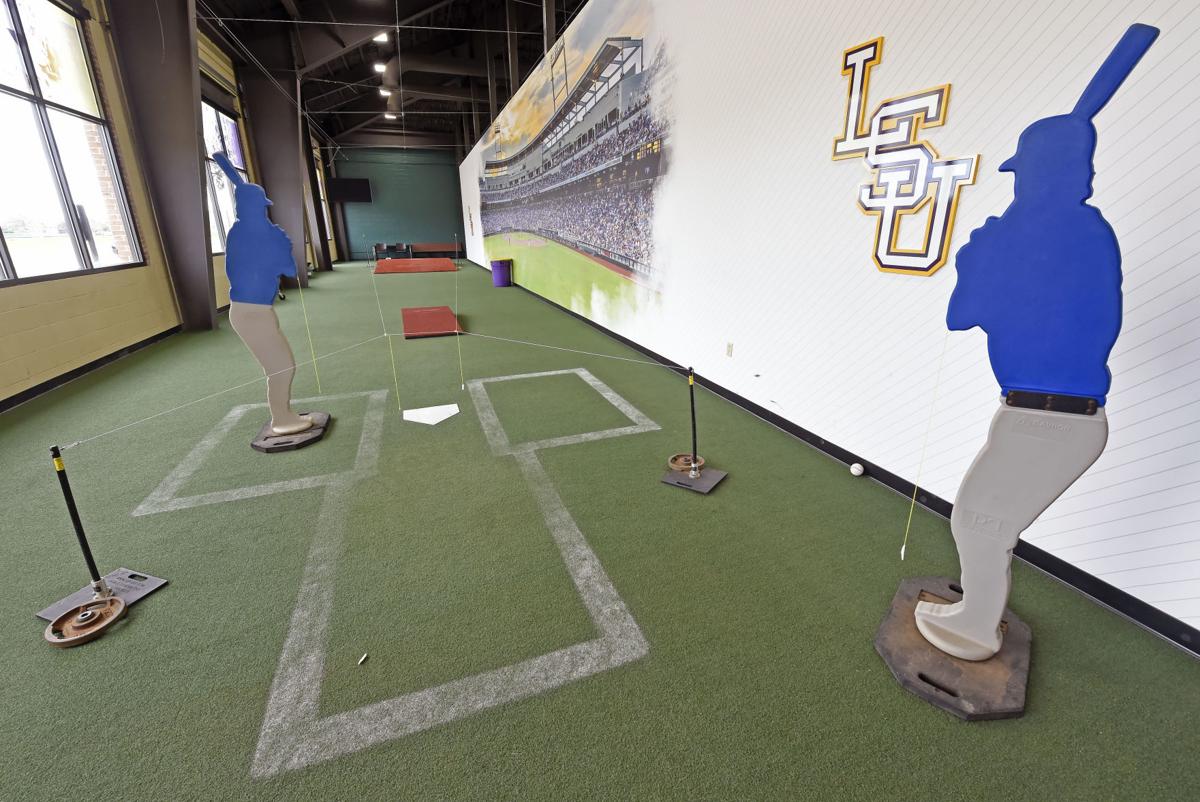 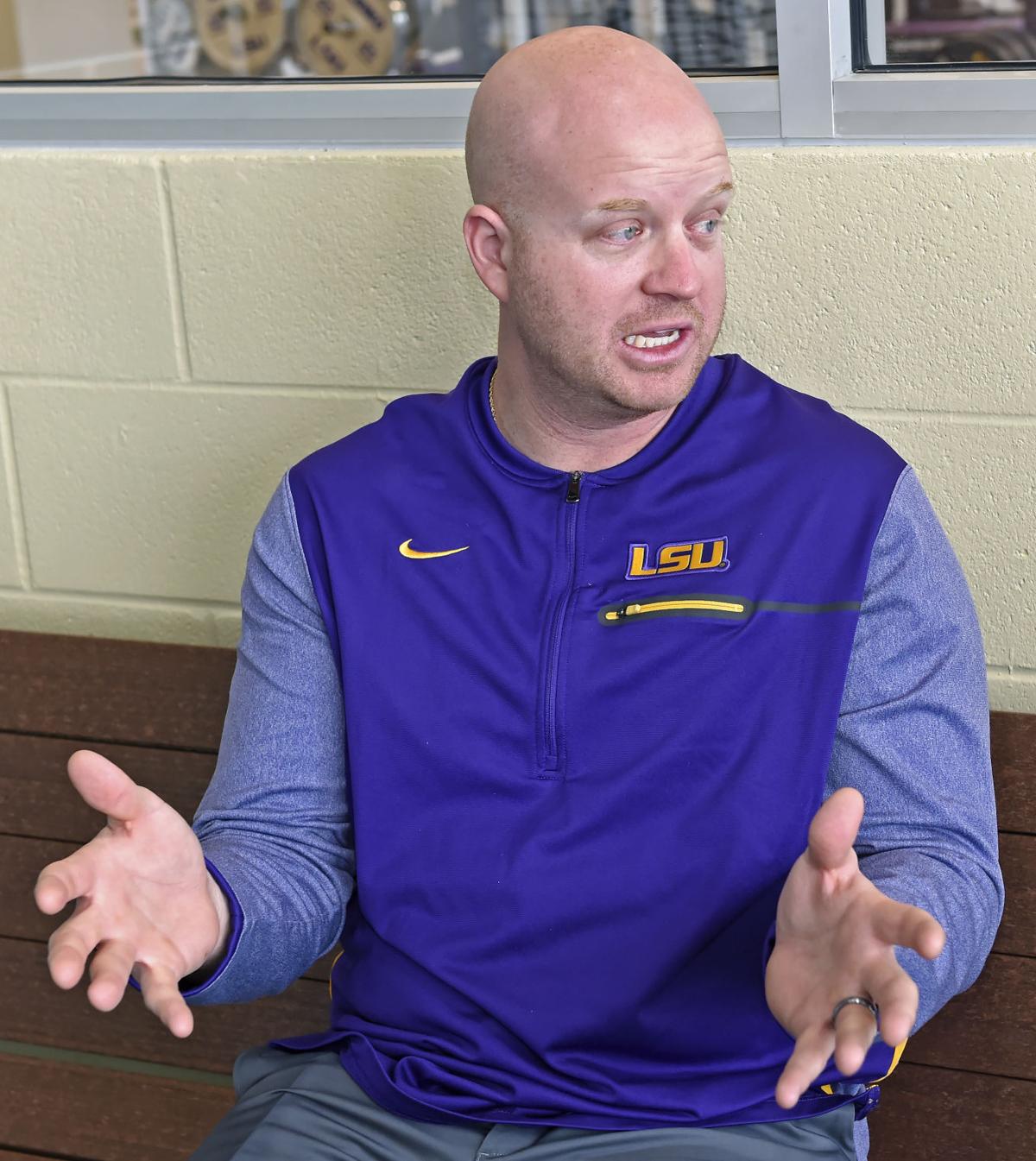 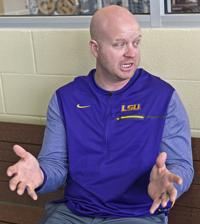 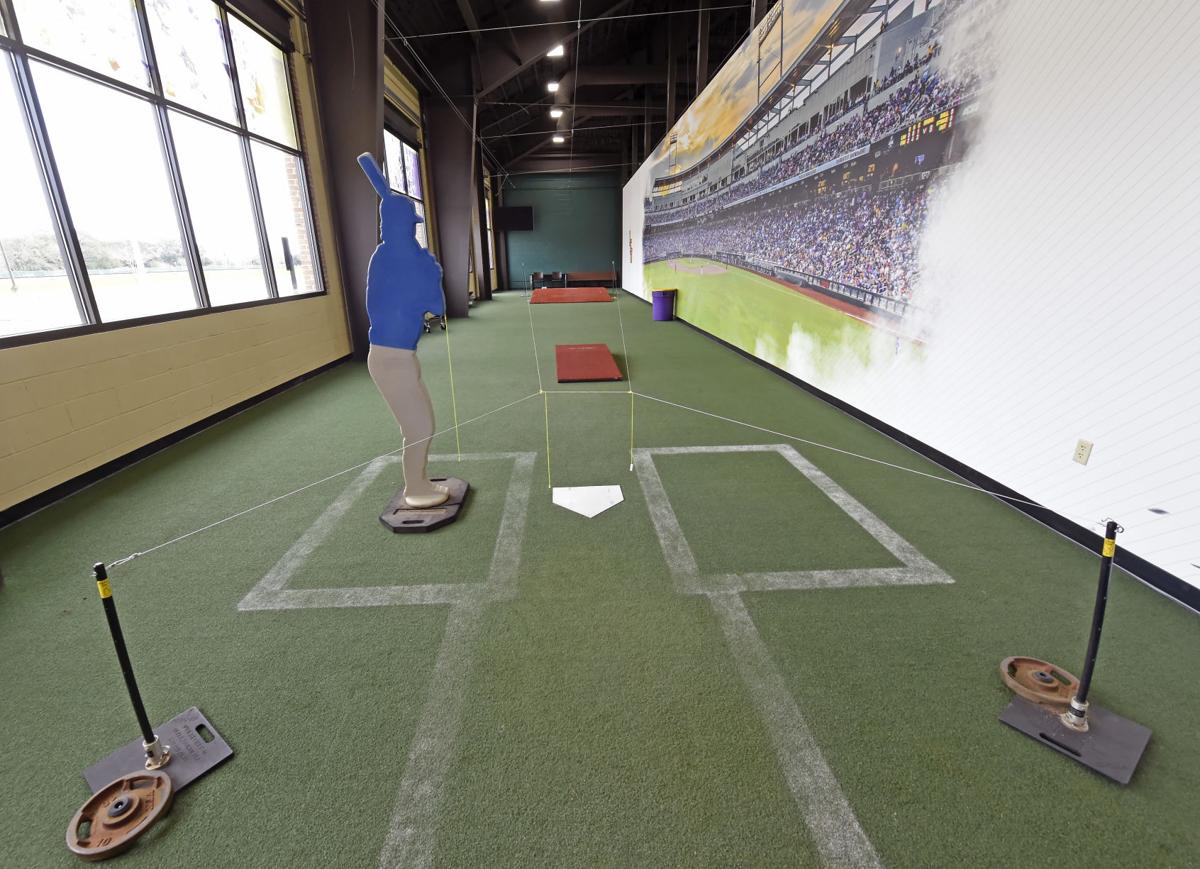 A couple weeks ago, LSU pitching coach Alan Dunn asked Jamie Tutko, director of video and scouting, to film Nick Storz during a bullpen session. Storz has missed almost three seasons because of injuries, but the redshirt sophomore had started his return to the mound.

Tutko recorded with an Edgertronic slo-mo camera, which captured thousands of frames per second, creating a series of detailed still images. LSU bought the $6,000 camera last year when it converted one of its batting cages into the Aaron Nola Pitching Development Center.

The space, located inside the Marucci Performance Center, gives Dunn and the pitching staff a secluded area within the facility. A wall with murals from the College World Series and Alex Box Stadium separate the room from batting cages.

After Storz threw, he sat with Dunn. They looked at the video, which uploaded within seconds of each pitch. Dunn noticed Storz’s arm angle had dropped, but he wanted to show Storz himself. They overlayed clips of Storz throwing his fastball and changeup. His release point did not match.

“When you haven't been doing that for two or three years, you get out of whack,” said Dunn, who enters his ninth season at LSU. “He's got to continue to do it and fix it and get the feel for that, but at least we have the data to back up what our eyes are seeing.”

The pitching development center, often called the “pitching lab” around LSU, reflects the program’s increasing use of technology. Within the last year, LSU has bought Motus sleeves for its pitchers that track workload, used a specialist who analyzes body movements and started the creation of a virtual-reality batting cage.

Most of the technology focuses on the pitching staff. After injuries decimated the group the past two seasons — at least seven pitchers missed games last year because of arm injuries — coach Paul Mainieri hopes deeper analysis can help LSU keep its pitchers healthy and reach the College World Series.

Paul Mainieri lived with chronic neck pain for more than a year. He held up his neck throughout the 2019 season. He feels better after offseason surgery and continues to recover.

“This fall, the velocities were up, there were no injuries and the guys still pitched well,” Mainieri said. “I think we're onto something.”

Since the beginning of fall practice, LSU’s pitchers have worn Motus sleeves every time they throw. Small blue chips, labeled with the last name of each pitcher, rest inside a pouch near their elbows.

Athletic trainer Cory Couture discovered the sleeves at a 2015 conference. He learned the chips tracked torque and arm speed, creating a ratio between acute and chronic workload. The information could help prevent injuries. Couture ordered one. Unsure of their accuracy, he limited the sleeves to players recovering from Tommy John surgery, such as former pitcher Nick Bush.

“We had a bunch of injuries last year,” Couture said, “so we decided to give it a go.”

Every night, Couture uploads information captured by the chips before he goes home. The data creates a color-coded ratio of the pitchers’ workloads for the day, week and month. LSU wants the number to sit between 0.8 and 1.3. Couture also used the sleeve on freshman infielder Collier Cranford, who underwent Tommy John surgery.

Using the amount and stress level of throws, the Motus system creates an easy-to-read printout. Couture examines the data when he arrives at the facility the next morning. He sends the information to Dunn and Mainieri, and the coaches use the ratios as they create throwing programs.

If the ratio for a pitcher nears 1.3, raising the chances of major injuries, Couture recommends the player receives a day off. If the number dips near 0.8, the player may need to throw more to build his endurance. Though LSU still consults its pitchers — and Dunn prefers to trust his players — the Motus sleeves provide hard evidence of fatigue.

“We’re learning more and more about the importance of recovery,” Mainieri said. “We’re giving them more days off than we ever have before.”

Pitchers will not wear the sleeves during games this season, so Couture will use other data as he tries to project future workloads. Combining the information gathered by Motus sleeves during bullpen sessions and pregame warmups, Couture wants to avoid the scenario in which one of the pitchers registers a high ratio the day LSU scheduled him to appear.

That, Couture said, is the complicated part of this process. Couture has already created monthlong projections for LSU’s four starters, and he knows they will change.

Earlier this week, Dunn and Tutko sat behind a table inside the pitching development center. The Edgertronic camera faced the artificial-turf mound on the opposite side of the room. Metallic pings from nearby batting practice filled the air, but Dunn and Tutko felt secluded.

With Mainieri as the catalyst, LSU began planning the pitching development center last summer. It existed less than two months later, completed by the beginning of fall practice. Nola, a former LSU pitcher on the Philadelphia Phillies, donated an undisclosed amount of money.

The room helps LSU remain on schedule. When rain threatens to postpone outdoor bullpen sessions, the pitching staff moves inside.

Wherever LSU practices, it can use the high-speed camera or Rapsodo machine, which shows the break, direction and velocity of pitches. LSU does not use them every bullpen session, but when Dunn wants something taped, Tutko plugs the camera into his computer.

With the Edgertronic camera, a pitch-tracking system inside Alex Box Stadium called “Trackman” and portable Rapsodo machine, LSU knows the spin rate, release point and extension for every throw. It can see the location of pitchers’ fingers as they release the ball. Sophomore Landon Marceaux credited the videos for helping him improve the spin rate on his slider, a new breaking ball he will use this season, and repeating his arm angle.

For Dunn, the technology complements his coaching, but it does not replace the value of confidence and poise. Pitchers still have to make adjustments in the midst of games, sometimes between throws.

“You've got to figure it out,” Dunn said. “There ain't no camera in the game going to stop you.”

As LSU accumulates film, Dunn often must decide if analyzing tape with players will make a difference. During fall practice, he showed redshirt junior Eric Walker video from his freshman season, before he underwent Tommy John surgery, as they tweaked his mechanics. Walker thought it helped. But Dunn wants to avoid “paralysis by analysis.” Sometimes, he said, players have bad days.

“You've got to go out and get the job done,” Dunn said. “If you're using this and that makes you feel better, that's what it's for. I think combining it is the magic of making it all work.”

“Your spin rate doesn't matter if you can't throw it over that 17-inch white plate,” Tutko said.

During the offseason, Mainieri pulled virtual-reality goggles over his eyes. Standing inside a computer-generated batter’s box, the coach saw Cole Henry, LSU’s sophomore ace. Mainieri held a bat with a sensor, and Henry pitched to him.

Using pitch data and footage, a company called WIN Reality had created a lifelike simulation. It allowed batters to judge balls and strikes against pitchers they will face in games. LSU signed a three-year contract.

Mainieri knew LSU needed to adapt, so the program stepped further into the technological age of baseball during the offseason. It let pitchers individualize routines more, and the coaches analyzed how they train pitchers, trying to find an answer for the injuries that derailed two seasons.

LSU wanted to find left-handed pitchers during the recruiting cycle. After adding three to the roster, the Tigers may have found left-handed arms to contribute this spring, giving them another dimension to the pitching staff.

The efforts made current players feel appreciated by the coaching staff, understanding they have every tool at their disposal. And though LSU has increased its use of technology, it expects injuries will happen this season. Information cannot prevent them. But it may assist LSU as it prepares players.

Jaden Hill looked like one of LSU's best pitchers through two starts last year. Then, he didn't pitch for eight months. As Hill tries to resume his ascent, LSU has devised a cautious plan for his workload.