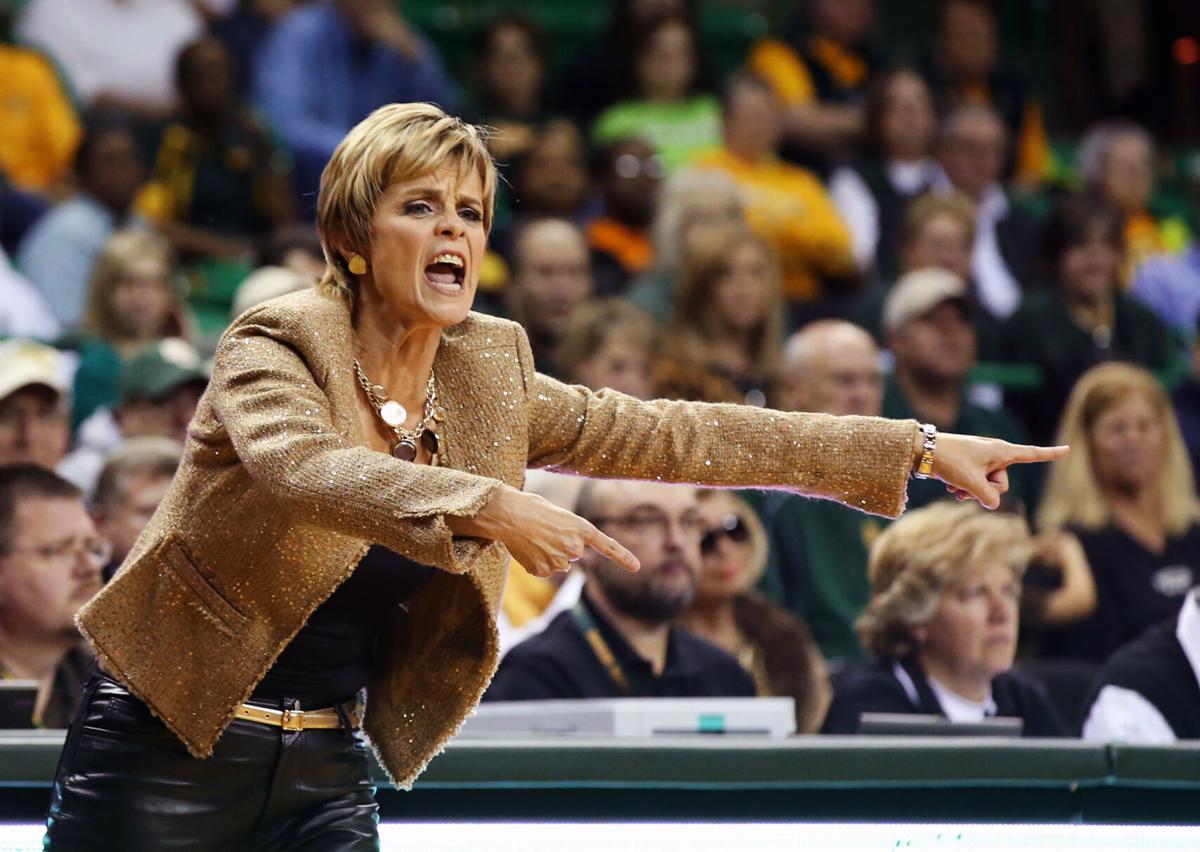 Baylor coach Kim Mulkey during a game against Mississippi 2013. 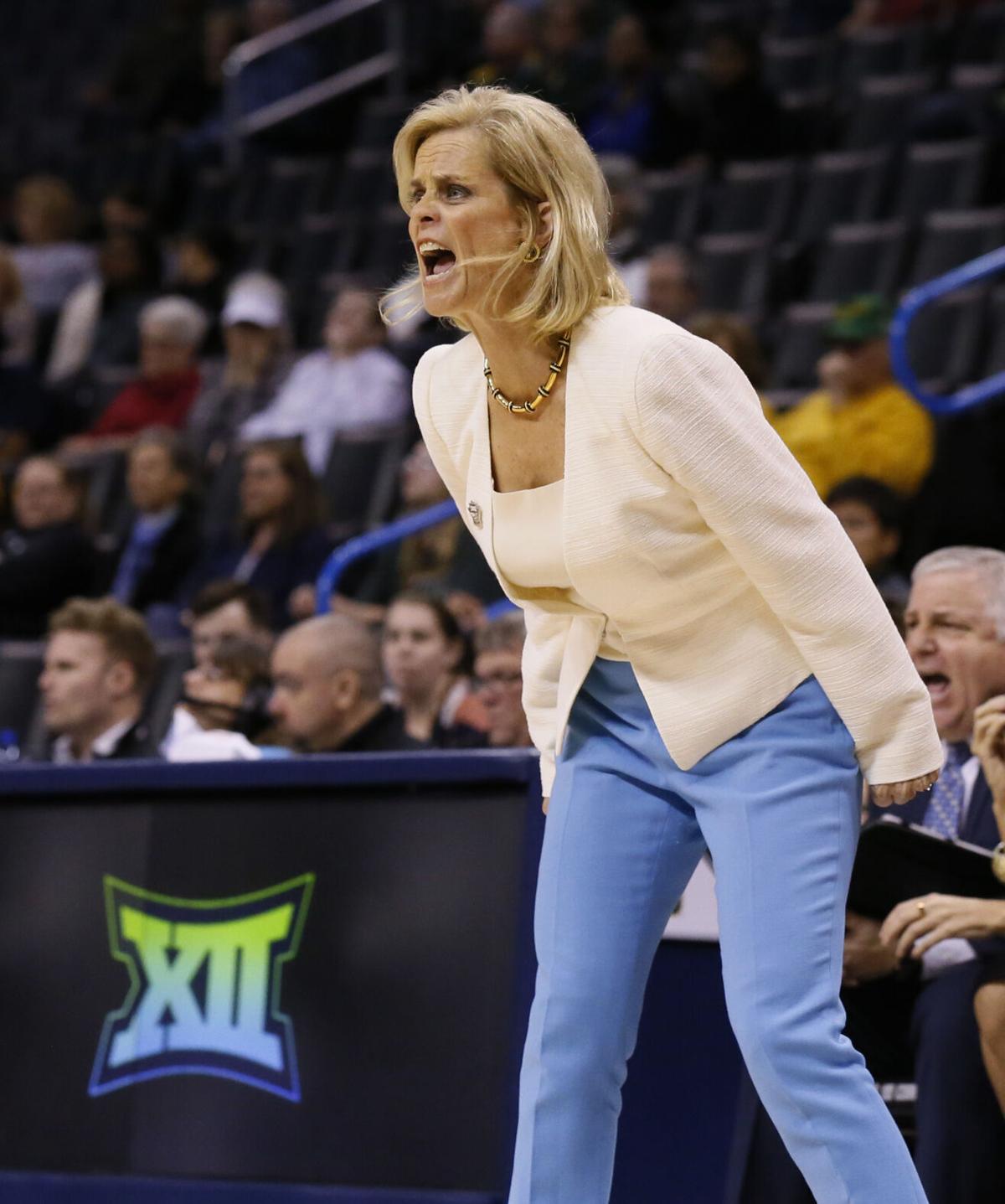 Baylor head coach Kim Mulkey shouts to her team in the first half against West Virginia in 2017. 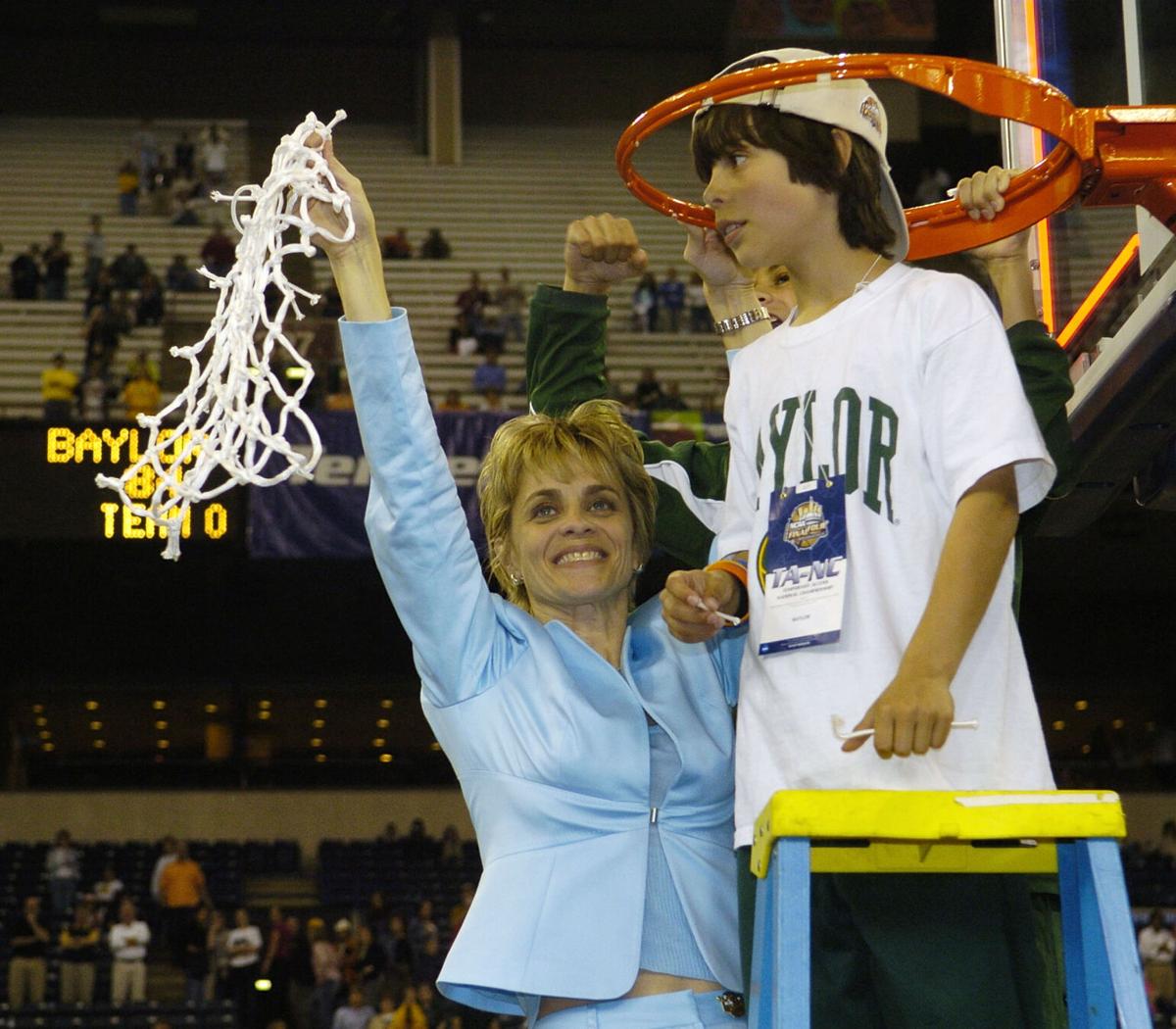 Baylor Coach Kim Mulkey with her son Kramer Robertson, then 10, cut down the net after winning the 2005 NCAA championship over Tennessee on April 5, 2005 in Indianapolis. 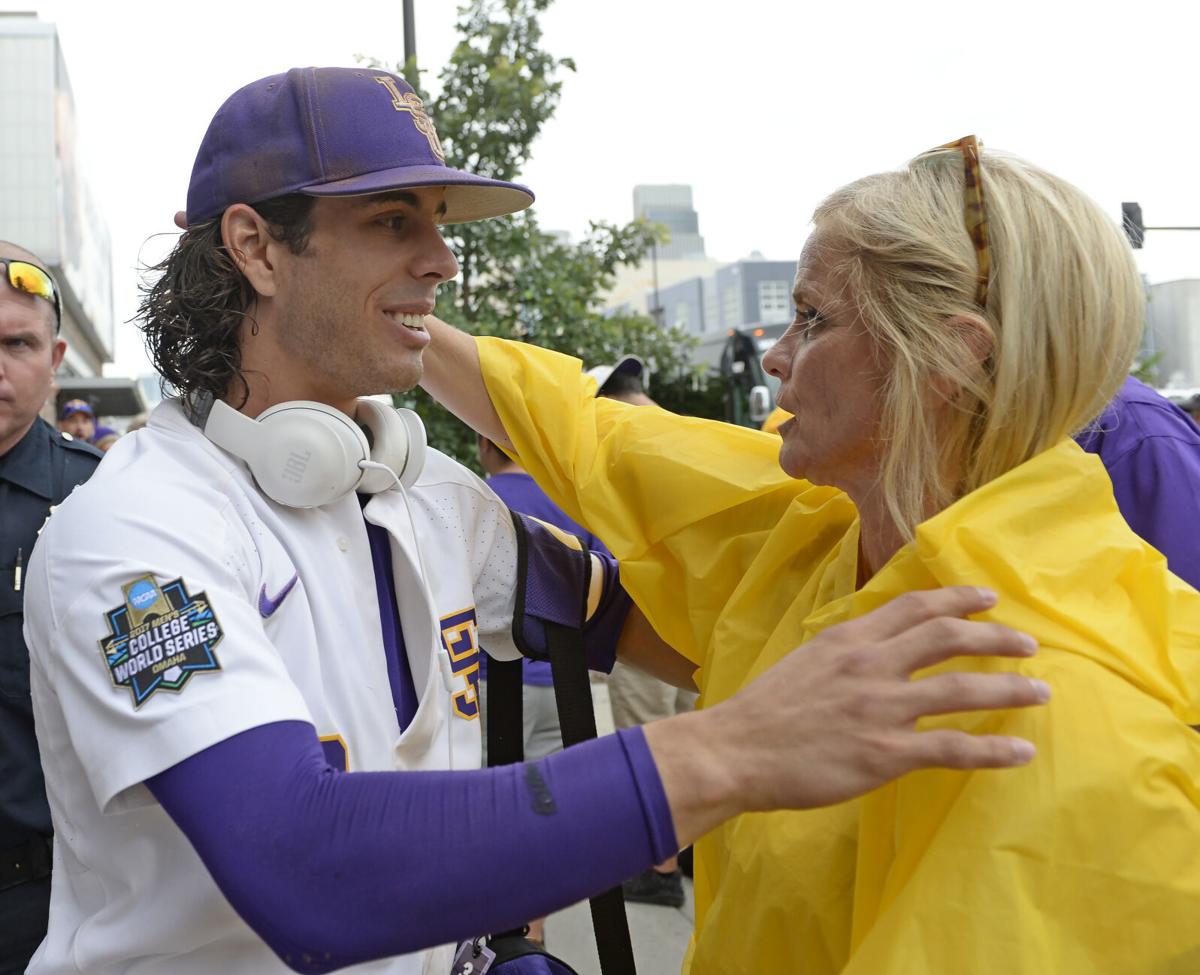 LSU shortstop Kramer Robertson (3) hugs his mom, Kim Mulkey, as the Tigers arrive before Game 2 of the 2017 College World Series against Florida State. 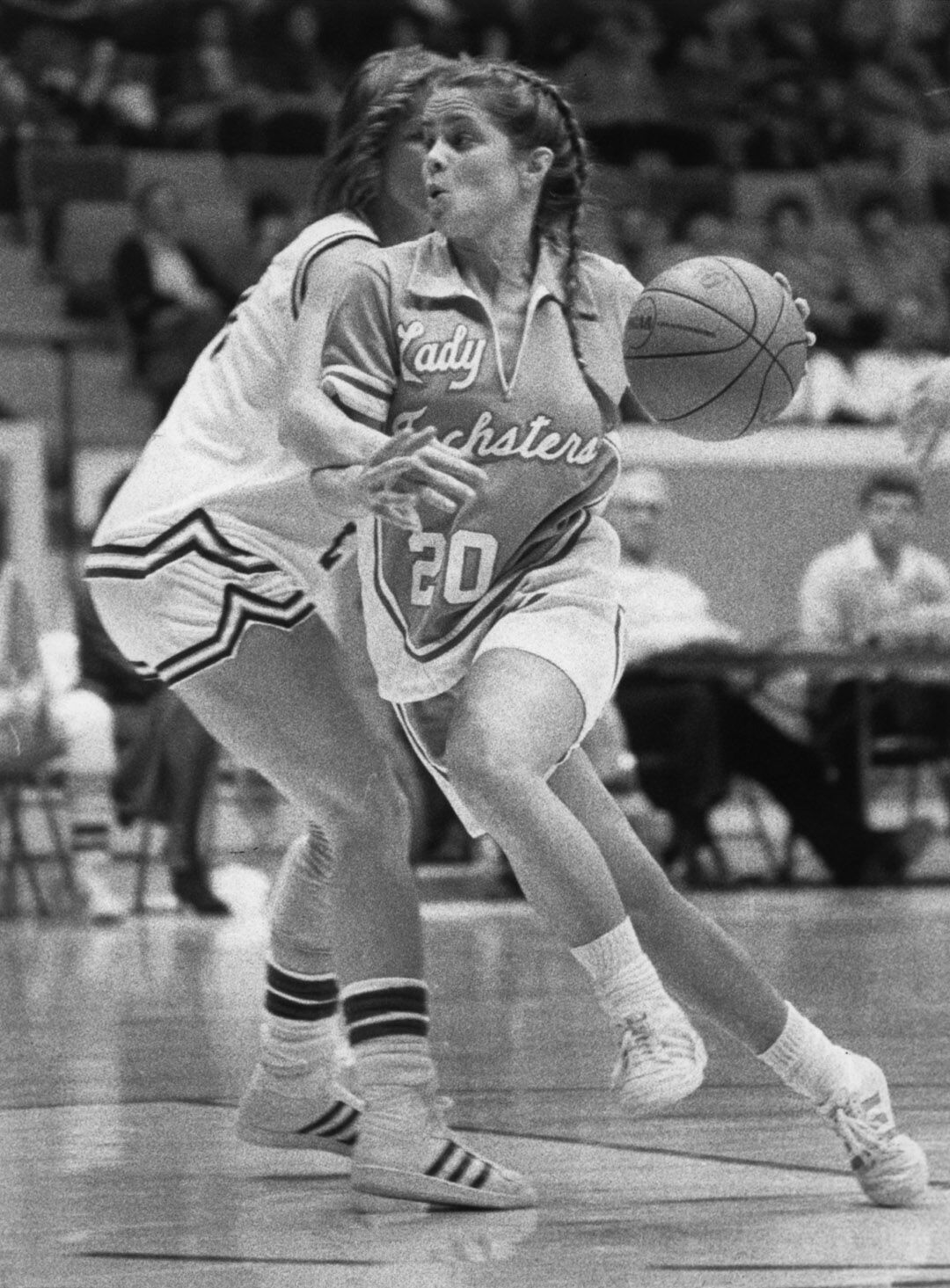 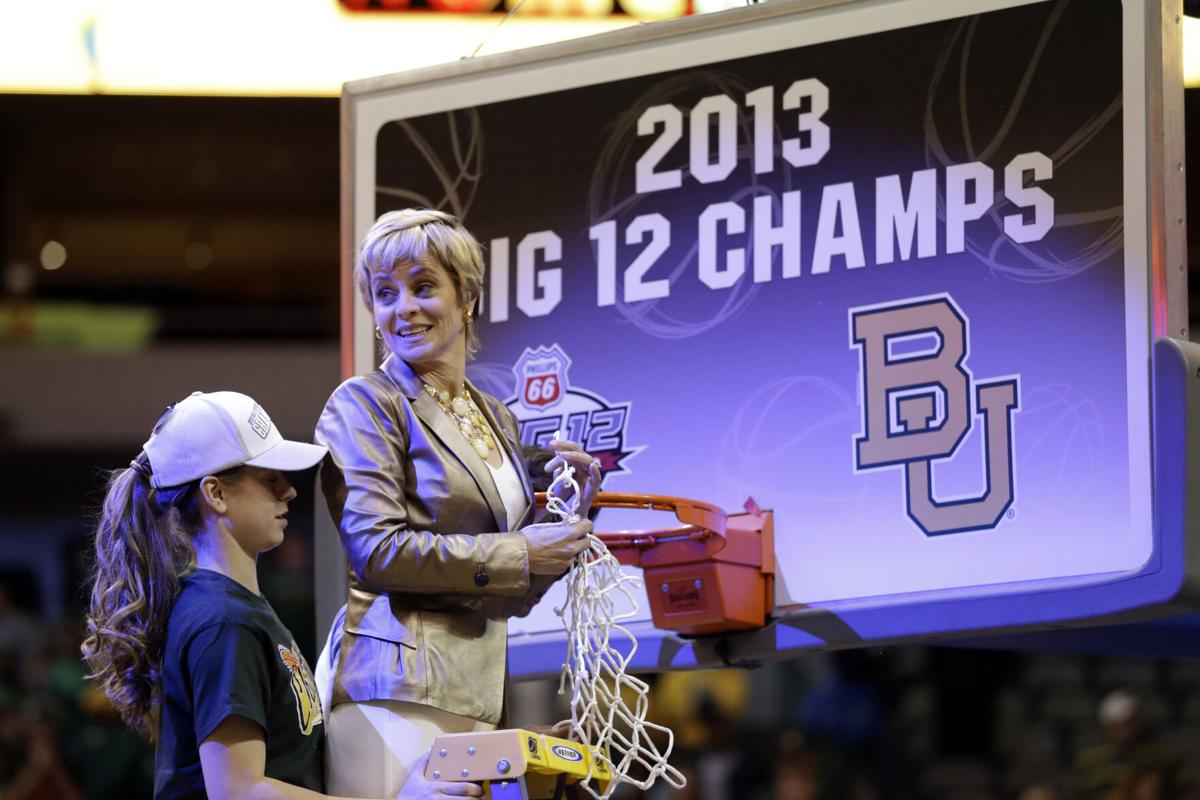 Makenzie Robertson (left) and her mother Kim Mulkey stand atop the ladder after cutting down a link of the net after winning the Big 12 Conference tournament in 2013. 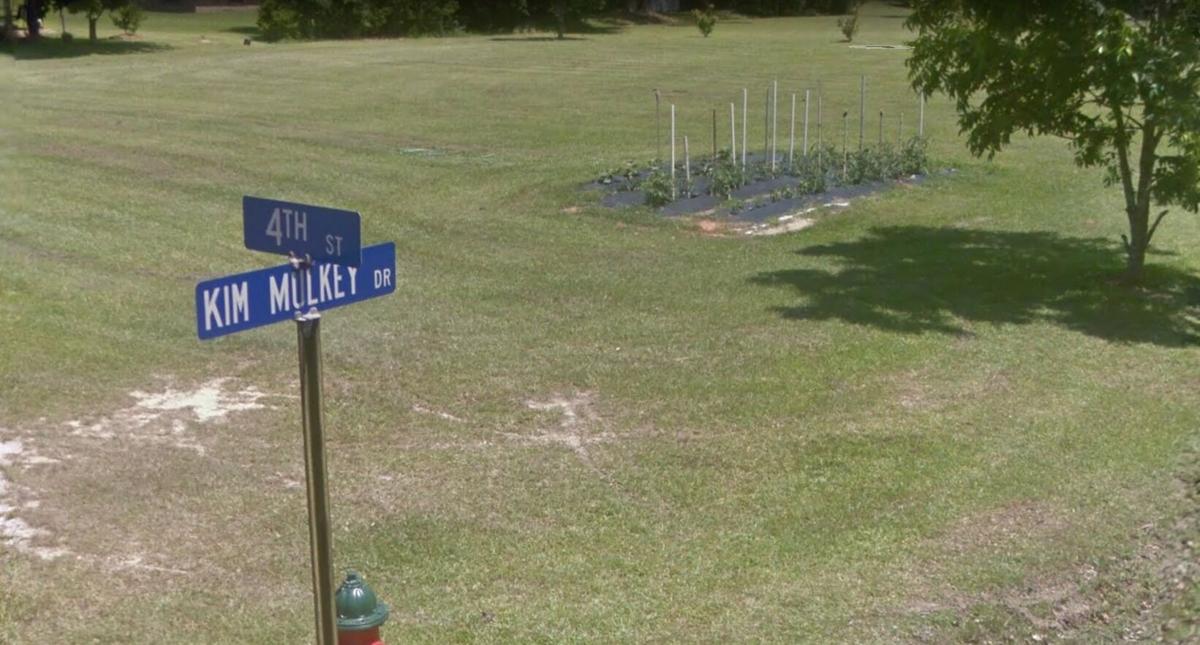 Baylor coach Kim Mulkey during a game against Mississippi 2013.

Baylor Coach Kim Mulkey with her son Kramer Robertson, then 10, cut down the net after winning the 2005 NCAA championship over Tennessee on April 5, 2005 in Indianapolis.

Legendary Baylor head coach and Louisiana native Kim Mulkey will depart her longtime post in Waco, Texas and take over Tigers women's basketball after the departure of Nikki Fargas.

The school confirmed the hire Sunday afternoon with the words: "Welcome home."

Mulkey is no stranger to Louisiana despite more than two decades coaching across the border. Here are five things to know about Mulkey as LSU prepares for a new coaching era.

FROM TICKFAW TO TECH

Kim Mulkey was born in California, but her game grew up in Louisiana. The basketball legend was raised in Tickfaw and starred at nearby Hammond High School, where she helped lead the program to four consecutive state championships before graduating as valedictorian.

In 1980 Mulkey, now 58, began her college playing career at Louisiana Tech. Success came early and often, finishing off her four years with a record of 130-6. The Lady Techsters won the AIAW championship in her freshman year, and the inaugural NCAA Tournament a year later.

Rabalais: Why is Kim Mulkey leaving Baylor for LSU? Louisiana is where her heart is

When Scott Woodward left a good job as athletic director at deep-welled Texas A&M to return to LSU — the Aggies don’t have deep pockets, t…

Mulkey later coached at Louisiana Tech for 15 seasons, beginning as an assistant before becoming associate head coach under Leon Barmore.

Tech went 403-63 during that span, winning another national championship and reaching the Final Four seven times.

Mulkey's head coaching career began at Baylor in 2000 and her winning ways never wavered. Under Mulkey the Bears have qualified for the NCAA Tournament in all but one season — excluding the 2020 tournament that was cancelled due to the coronavirus pandemic — and have reached the Elite Eight or better nine times.

Mulkey's 632 wins as a head coach ranks 59th in NCAA women's basketball history, but other marks better illustrate just how dominant that run truly was. With just 104 losses in that span, her career winning percentage of .859 is second only to UConn's Geno Auriemma among those ahead of her on the list.

In 2020, Mulkey became the fastest-ever NCAA coach (men or women) to reach 600 wins. She hit that mark in her 700th game, 16 faster than Auriemma and four games faster than Adolph Rupp, who holds that record on the men's side.

Kim Mulkey, the south Louisiana native who rose from small-town high school star to the Naismith Basketball Hall of Fame, is set to be LSU’s n…

Mulkey's career is far from over, but it will be immortalized regardless of what happens from here. Mulkey was part of the nine-member class inducted into the Naismith Memorial Basketball Hall of Fame in 2020, and Mulkey remains the only person in NCAA history to win national championships as a player, assistant coach and head coach.

Kim Mulkey's drive has led her to success, but Kim Mulkey Drive is an address.

Yes, the Village of Tickfaw named a street in her honor — among other celebrations — upon her return from the 1984 Olympics where she helped lead Team USA to a gold medal.

"I even remember cutting a ribbon at the opening of a McDonald's restaurant, with Ronald McDonald standing next to me — a child's dream come true," Mulkey shared in her biography.

If you were wondering, the speed limit on Kim Mulkey Drive is 15 miles per hour.

If you turned on a broadcast of LSU baseball from 2014-17, there was a good chance you at least heard Kim Mulkey's name. You might have even seen her sitting in the stands.

That's because her son, Kramer Robertson, was a star shortstop for the Tigers during that span, helping lead LSU to the 2017 College World Series. Robertson was drafted in the 4th round by the St. Louis Cardinals and is currently in their minor league system.

After the announcement that his mother had been officially hired at his alma mater, Robertson revealed a struggle he'd faced.

Hardest secret I’ve ever had to keep in my life... GEAUX TIGERS!!! https://t.co/Wfn9rhqwR3

"Hardest secret I’ve ever had to keep in my life...," he posted to Twitter, along with a "GEAUX TIGERS!!!"

Kramer's older sister, Makenzie Fuller, was also a star athlete and played softball and basketball at Baylor from 2010-2014 and spent the past five years as a member of the Baylor coaching staff alongside her mother.

Here's when, where Kim Mulkey will be announced as LSU coach (and yes, fans are invited)

Kim Mulkey leaves Baylor for LSU: Catch up on all the latest stories after Tigers' bombshell hire

LSU dropped its bombshell hire of Kim Mulkey on Sunday afternoon, and it didn't take long for the reaction to start churning across social media.