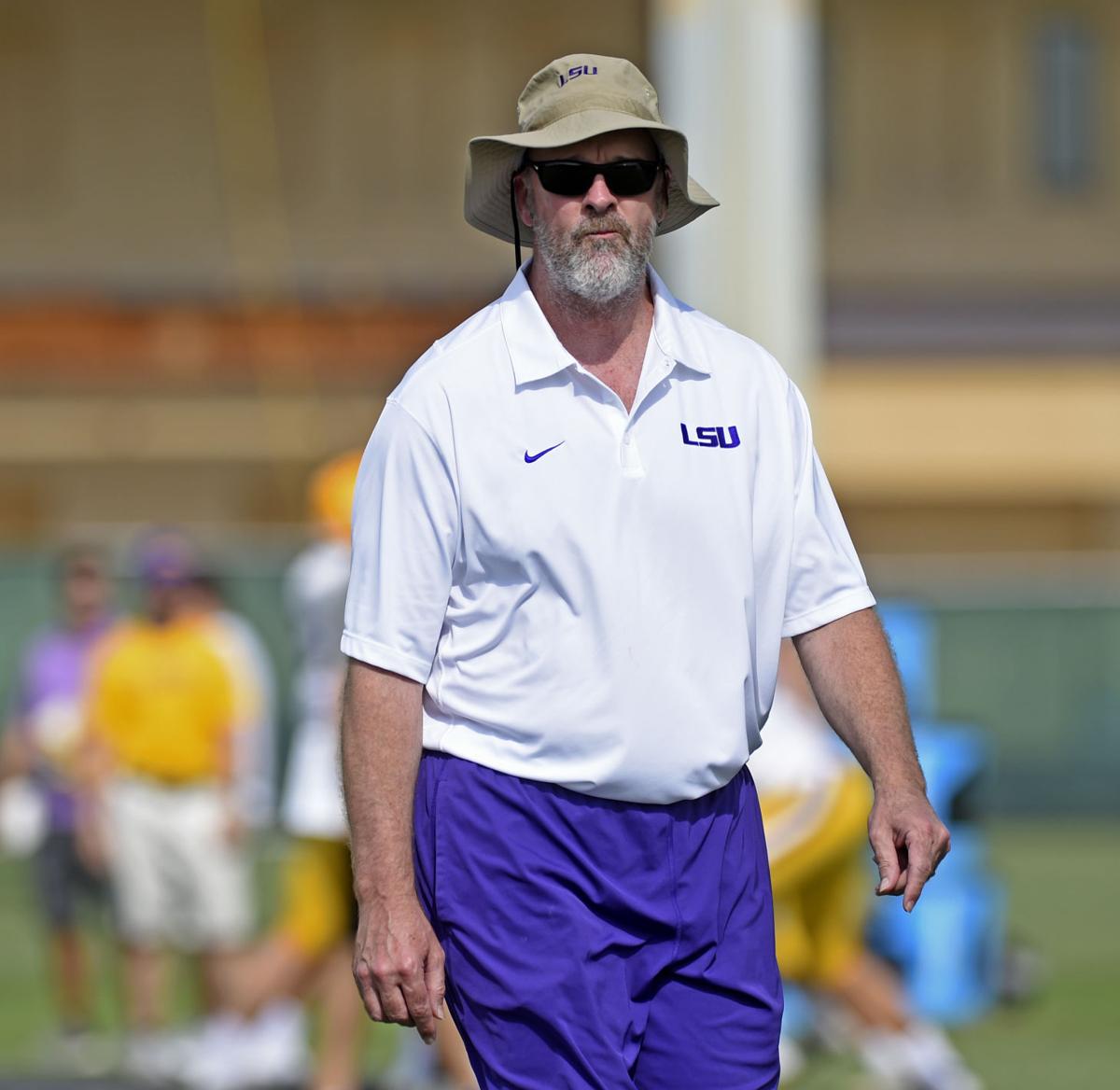 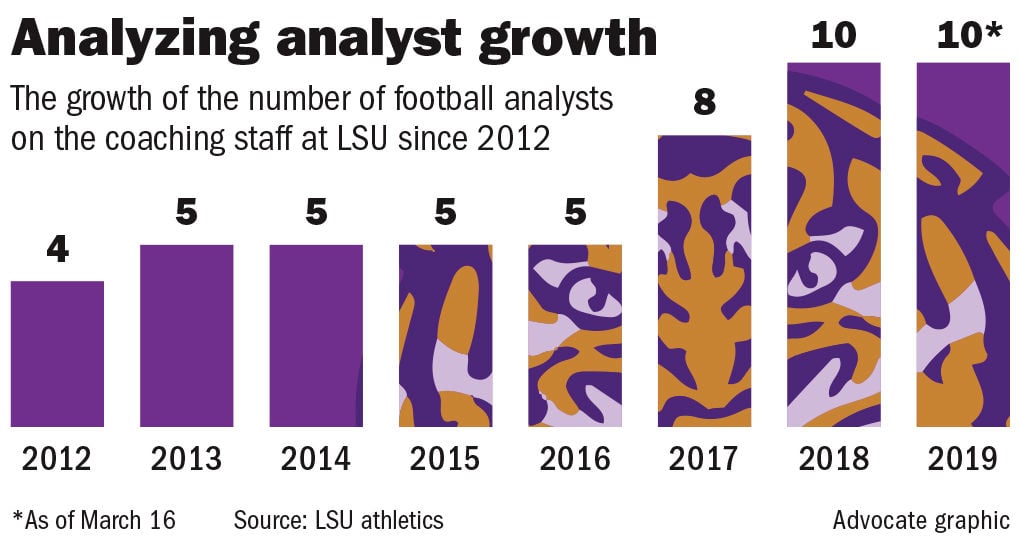 It was the night before spring football in 2018, and Kevin Coyle didn't really know where he was going.

Coyle had heard LSU coach Ed Orgeron was expanding his football support staff, and after a few well-placed phone calls, the former Cincinnati Bengals defensive backs coach found himself on an airplane headed for south Louisiana.

Coyle checked into a Baton Rouge hotel and set his alarm for an early hour. In the morning, he found the athletic facility, where a few employees handed him some gear, and the next thing Coyle knew, he was in a team meeting with the entire LSU coaching staff.

Yes, Coyle had become an analyst — a buzzword that's emerged in the college football world within the past 10 years. The position hardly existed before then, but it has become the most recent ammunition in the arms race of college athletics.

Deep-pocketed programs across the nation have swept up handfuls of the game's valuable minds and set them to do the grunt work that provides teams yet another competitive edge.

Maybe you remember how before the 2018 season, Orgeron requested that the analyst staff size be nearly doubled after an unnamed Alabama staffer sent him a scouting report that showed just how far behind the Tigers were.

"I was embarrassed to see the detail of which (Alabama) scouted on us," Orgeron said in August. "To see the things they had on us, I felt like I wasn't giving our team a chance to win."

And so, Orgeron was cleared to hire coaches like Coyle, and LSU expanded from five analysts in 2016 to 10 in 2018.

"It wasn't just something that we were trying to keep up with the Joneses, so to speak," said Coyle, who became the head coach of the Atlanta Legends in the start-up Alliance of American Football after less than a season at LSU. "(Orgeron) wanted guys to go in there and roll up their sleeves and be effective contributors to the staff. We got along so good, a bunch of guys that took the approach that there was nothing too small, too big, that we could do to help the team."

But what exactly is an analyst? What do they actually do?

There's really no firm definition of what an analyst is in the NCAA rulebook; the position is created out of a loophole.

Analysts fall under a category of coach that isn't considered "countable" by the NCAA, which means that although they are prohibited from directly coaching players or going on off-campus recruiting trips, there is no limit on how many analysts a program can have on staff — a major complaint for programs with smaller budgets.

Essentially, analysts are tasked with the responsibility of creating detailed gameplans that traditional coaches don't have the time to do themselves.

Perhaps an analyst's job is best illustrated like this: Take the elevator to the second floor of Tiger Stadium, walk down the hall to the row of coaches offices, and imagine Coyle and the rest of the analysts sitting in a room, staring into monitors late into the night.

This is where the bulk of the work was done.

In the late spring of last year, when LSU's full-time coaching staff had taken off on the recruiting trail, the analysts would slog through the numerous files of game film the full-time staff had left behind.

Sometimes a coach would leave behind instruction, but mainly, Coyle said, the analysts were left to use their own intellect to see what they could find.

Patrick Queen dipped his chin into his folded hands and considered the question.

"Let's say for example, I was looking at third downs — just the basic information of what a team did on third down," said Coyle, who left LSU in October (though the bulk of his work was done before the season). "I'm figuring out what they want to do against man-to-man (coverage), certain zone (coverage, and also) 'This is what the quarterback does best'; 'He really struggles when you bring pressure, so we may want to be more aggressive in this game.' "

By the end of the summer, the analysts had prepared entire books of data for every LSU game, including the season opener against Miami — a 33-17 LSU win.

"I think we knew Miami better than they knew themselves," Coyle said. "We became the experts of what the opponent was doing."

During the season, the analysts would update the information week to week to include the next opponent's most recent games.

There were Sunday afternoon briefings, when the analyst staff led PowerPoint presentations other coaches, handing out notebooks that included bullet points, lengthy descriptions of philosophies and diagrams of plays.

"You can go on and on," Coyle said. "The time and manpower to focus on certain things, you may uncover things you may not normally be able to get to."

Of course, watching film is far from a modern development. Coaches have been breaking down opponents ever since they've been able to lug reel-to-reel tapes into darkrooms.

So why the recent proliferation of analysts?

In the 1960s and '70s, graduate assistants usually were tasked with breaking down film to provide data for game plans. Only, at that time, they would be given punch cards for every play, and they'd have to punch out marks for down-and-distance, which hash mark the ball was on and so forth.

By the end of a late-night film study, a graduate assistant would have a mountainous pile of cards for every game, and he'd have to run it through a computer to print out the data for the coaching staff.

It's something Hatfield did as a graduate assistant for Army in the mid '60s.

"The first game I did was a Navy game, and I made about 100 mistakes," said Hatfield, a head coach from 1979 to 2005 with stops at Air Force, Arkansas, Clemson and Rice. "I was so tired all night, and the guy was so ticked off at me the next day. 'This stuff is terrible.'

The longest standing member of the LSU football staff, Sam Nader, will be inducted into the …

With modern technology, it's evident why any athletic program would want to employ as many analysts as possible.

But some programs can't afford to keep up with top moneymakers like LSU, which paid its analyst staff nearly $600,000 in total salary during the 2018 season (Coyle made $70,000 according to public documents).

That kind of money would make for a considerable chunk in an athletic budget at a non-Power 5 program like Arkansas State, which according to USA Today recorded a total athletic revenue of $39.4 million in fiscal 2017 — over $100 million less than the $147.7 million LSU hauled in that year.

"They've got more (analysts) than I've got staff," said Arkansas State coach Blake Anderson, who said he has three analysts on staff and that in past years some have had to work on a volunteer basis.

The disparity in staff sizes is another gap between the haves and the have-nots; the Red Wolves lost 57-7 to Alabama in Week 2 of the 2018 season.

There was enough unrest about the disparity for the NCAA Division I Council to propose legislation in 2017 that would limit a football program's total staff size to 30 members, but the proposal was tabled in January 2018 and has not been revisited.

"Ideally, we'd like to have an analyst for each position coach," Anderson said. "I mean, if you've got those guys looking for every possible tendency that's available, and you've got enough eyes to do that, there's definitely an advantage involved in that."

LSU tight ends are returning from injury, and OC Steve Ensminger is "going to have fun with that"

The routine was painfully repetitive.

It's an advantage LSU plans to continue to use.

Orgeron said Thursday the analyst staff is breaking down film of LSU's spring football practices, mainly focusing on the two things the Tigers struggled most with last season: pass rush on defense and pass protection on offense.

"We have some guys that are excellent analysts and have coached pass rush before," Orgeron said, "And I'm learning from them. And we have some analysts that are excellent in pass protection. So we go over every step. We're working on technique. We're working on alignments. And at the end of the spring, they're going to start breaking down our opponent."

The 'Big Cat' drill is back on LSU football's first day of full pads, full contact of spring football

The whoops and hollers came clearly across the LSU outdoor practice facility.

Who might start for LSU in 2019? Take a look at The Advocate's projected offensive two-deep

Now that LSU football is back — with its first few spring practices come and gone, Ed Orgero…

Newly hired passing game coordinator Joe Brady is set to receive a three-year, $400,000 per year contract, according to documents released by …

LSU safeties coach Bill Busch proposed to receive a $50,000 raise, according to documents

LSU safeties coach Bill Busch is set to receive a $50,000 raise and a one-year extension to his contract, according to documents released by t…