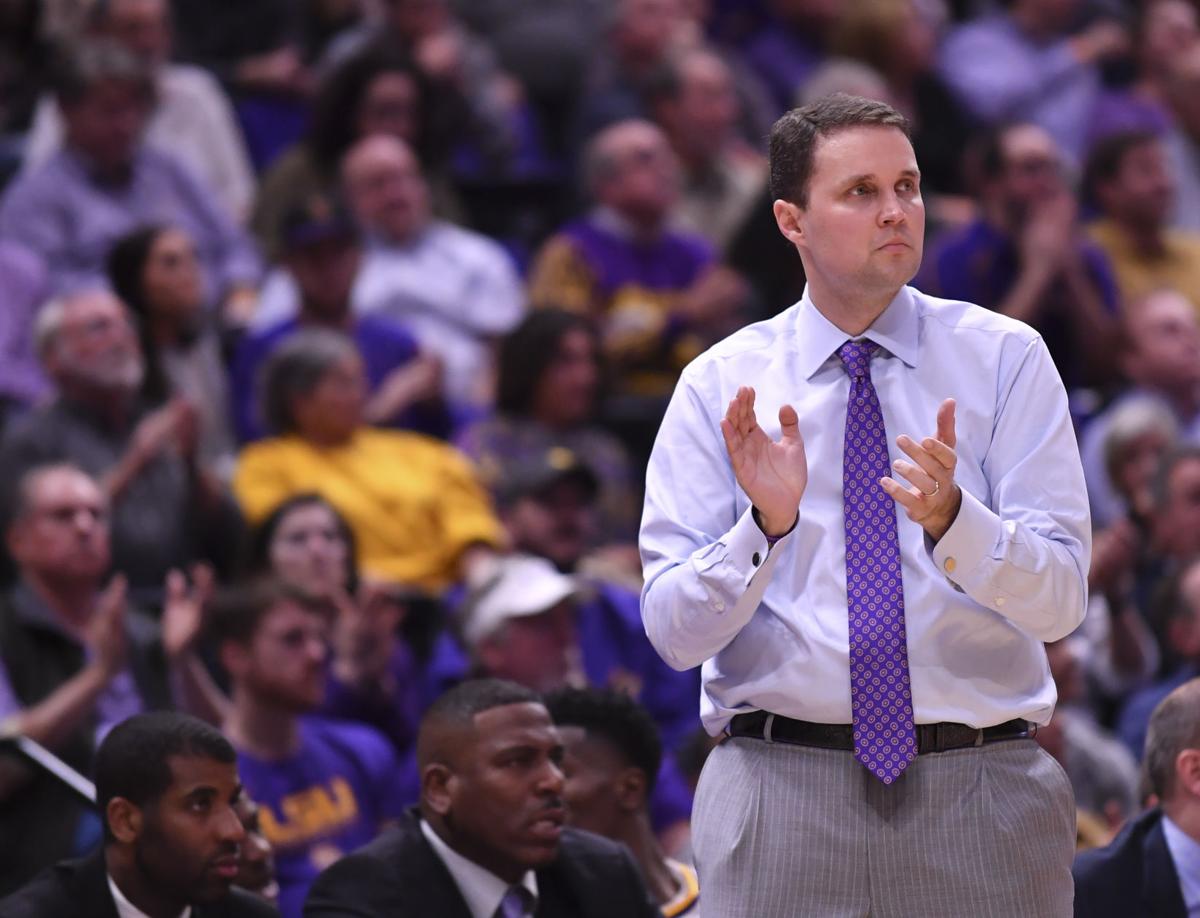 LSU coach Will Wade will go against his former boss, Texas' Shaka Smart, when the Tigers play the Longhorns in the SEC/Big 12 Challenge on Jan. 25 in Austin. 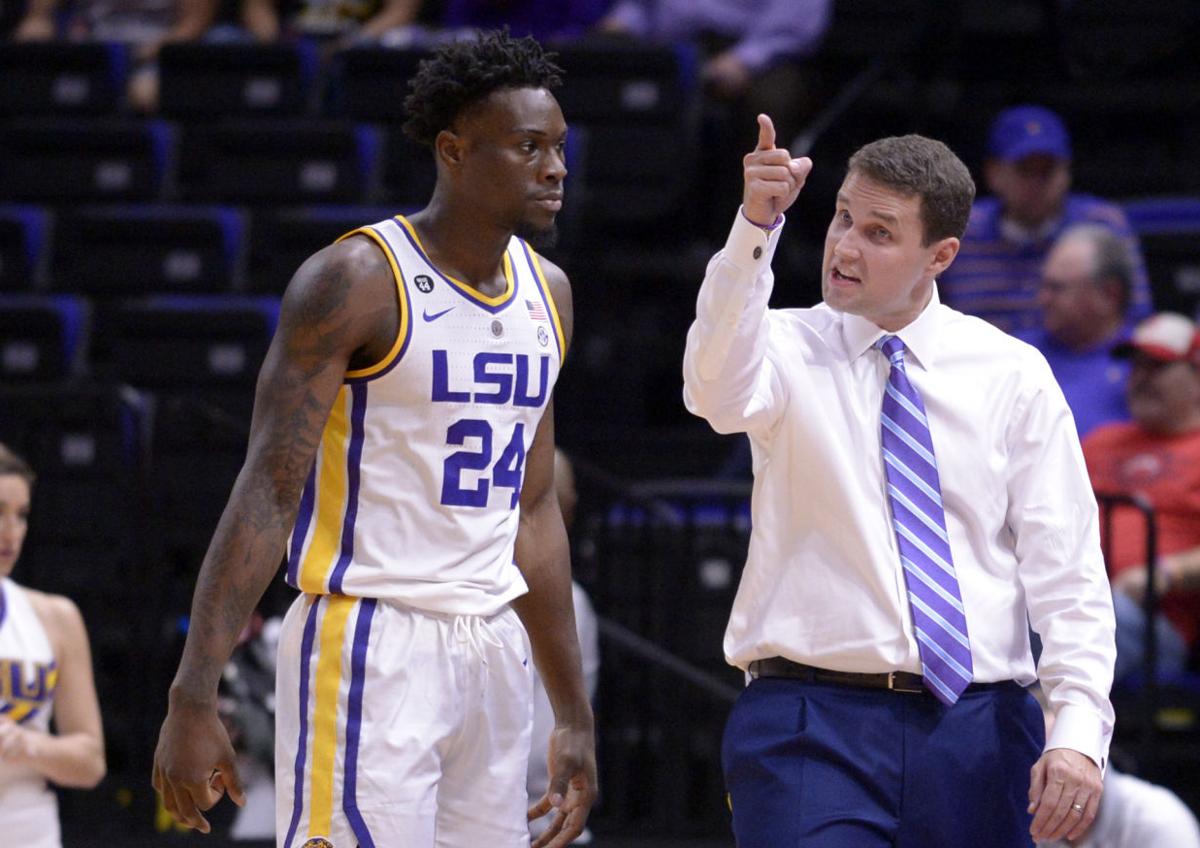 LSU coach Will Wade will send his team Thursday against the Dominican Republic, the world's 18th-ranked team, in the opener of what could be a four-game slate on its tour of Spain.

LSU coach Will Wade will go against his former boss, Texas' Shaka Smart, when the Tigers play the Longhorns in the SEC/Big 12 Challenge on Jan. 25 in Austin.

LSU coach Will Wade will send his team Thursday against the Dominican Republic, the world's 18th-ranked team, in the opener of what could be a four-game slate on its tour of Spain.

You have two ways to regard LSU’s reinstatement of Will Wade on Sunday night as its men’s basketball coach.

One, that LSU is running a full-blown renegade, win-at-all-costs athletic program that is thumbing its nose at the prospect of Wade having engaged in improper dealings to lure recruits (or at least one recruit).

Two, that LSU — and the NCAA — heard enough in their meeting Friday with Wade to satisfy them, that the worst of Wade's involvement in this Christian Dawkins federal wiretapping mess is behind them.

After a suspension lasting more than a month, LSU basketball coach Will Wade has been reinstated.

This is not to exonerate Wade completely. He was on an FBI wiretap discussing something that sounded at best fishy, likely in regard to LSU freshman Javonte Smart. And the fact that he refused initially to talk to LSU officials last month about the matter, prompting a five week-long suspension, made Wade look even more suspicious.

As a general rule, people who don’t want to talk usually have something to hide.

But, finally, Wade talked. One must assume — and much has been assumed in this case, good and bad, for months — that LSU and the NCAA liked what they heard enough to allow him to return. Albeit with an admonishment in the written statement from athletic director Joe Alleva that Wade did not come in to talk as he should have initially.

Alleva last month said he could handle whatever Wade had to say, even if it was bad. Perhaps this even turned out better than Alleva, Wade or anyone else at LSU could have imagined. It certainly appeared to be a long shot that both he and Wade would still be at LSU moving forward.

LSU’s brass is putting an exceptional amount of faith in Wade being on the level with them. If any more wiretaps, or damning evidence of any sort, comes out regarding Wade now, it will be a public relations nightmare for LSU, one of horrific proportions.

Again, however, you have to conclude that LSU believes the worst is over. And perhaps the reason for that is Javonte Smart himself.

Smart was held out of play by LSU at the same time Wade was suspended, missing the Tigers’ regular-season finale against Vanderbilt. It took days and days of work by LSU’s compliance department to finally clear Smart to play in the Tigers’ next game, their Southeastern Conference tournament opener against Florida.

Will Wade key moments: From LSU coach's suspension to now — how we got here

Will Wade was reinstated as the LSU men's basketball coach on Sunday night, ending a 37-day suspension.

The point is that LSU’s compliance department has a reputation for being exceptionally cautious, to the point it has frustrated many LSU coaches who believe rival schools are operating under less stringent restrictions. Based on a large mountain of evidence, it seems unthinkable that LSU would have allowed Smart to return to play if there were serious evidence he was involved in wrongdoing.

So, the craziest year of sports in Louisiana delivers yet another 90-degree bender of a curveball.

Who a month ago, or even a week ago, thought that it might come to this? Wade was seemingly gone for good, and by Thursday, five LSU players had declared for the NBA draft. The Tigers, coming off 28 wins, an SEC title and an NCAA Sweet 16 appearance, looked decimated.

Now Wade has returned, and it’s a decent bet that while Tremont Waters and Naz Reid are likely gone, the other three — Smart, Skylar Mays and Emmitt Williams — will be back to help form the nucleus of what should still be a very good team for the 2019-20 season.

Wade will be operating under an avalanche of scrutiny for the foreseeable future. It will perhaps be the ultimate test to see if he can continue to run a successful, championship-level program without again having his ethics called into question.

But LSU has its man back. The coach who, on the face of it, appears to give LSU the best hope for winning more championships and making more deep runs in the NCAA tournament.

Wade, in his statement, says he is "humble and grateful to be back at LSU." In a strange way (in fitting with the general them of the 2019 sports year), this may prompt Wade to want to stay if more established programs or the NBA one day come calling.

At least for now, LSU has a big win.

The question remains whether it will have to pay a greater price.