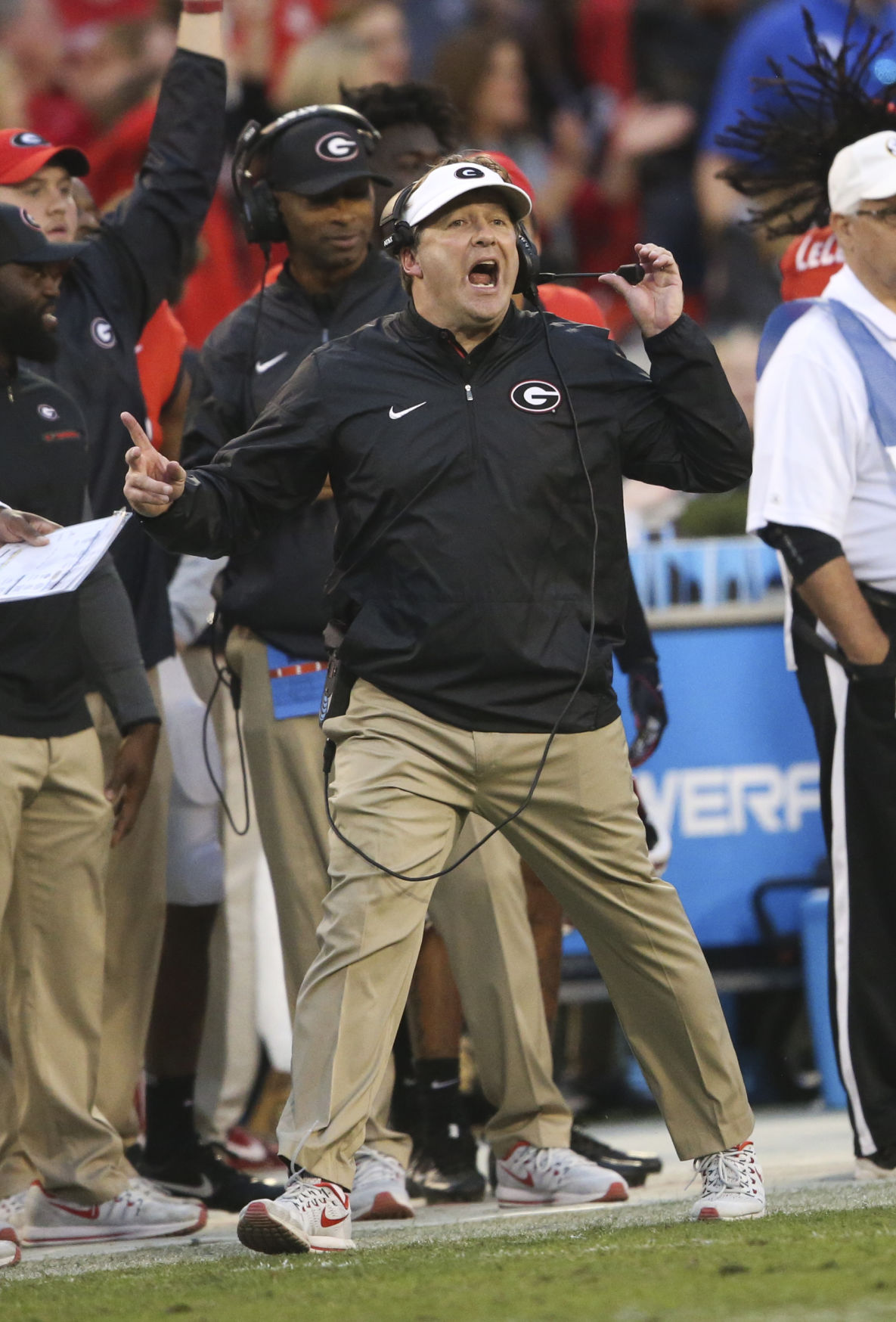 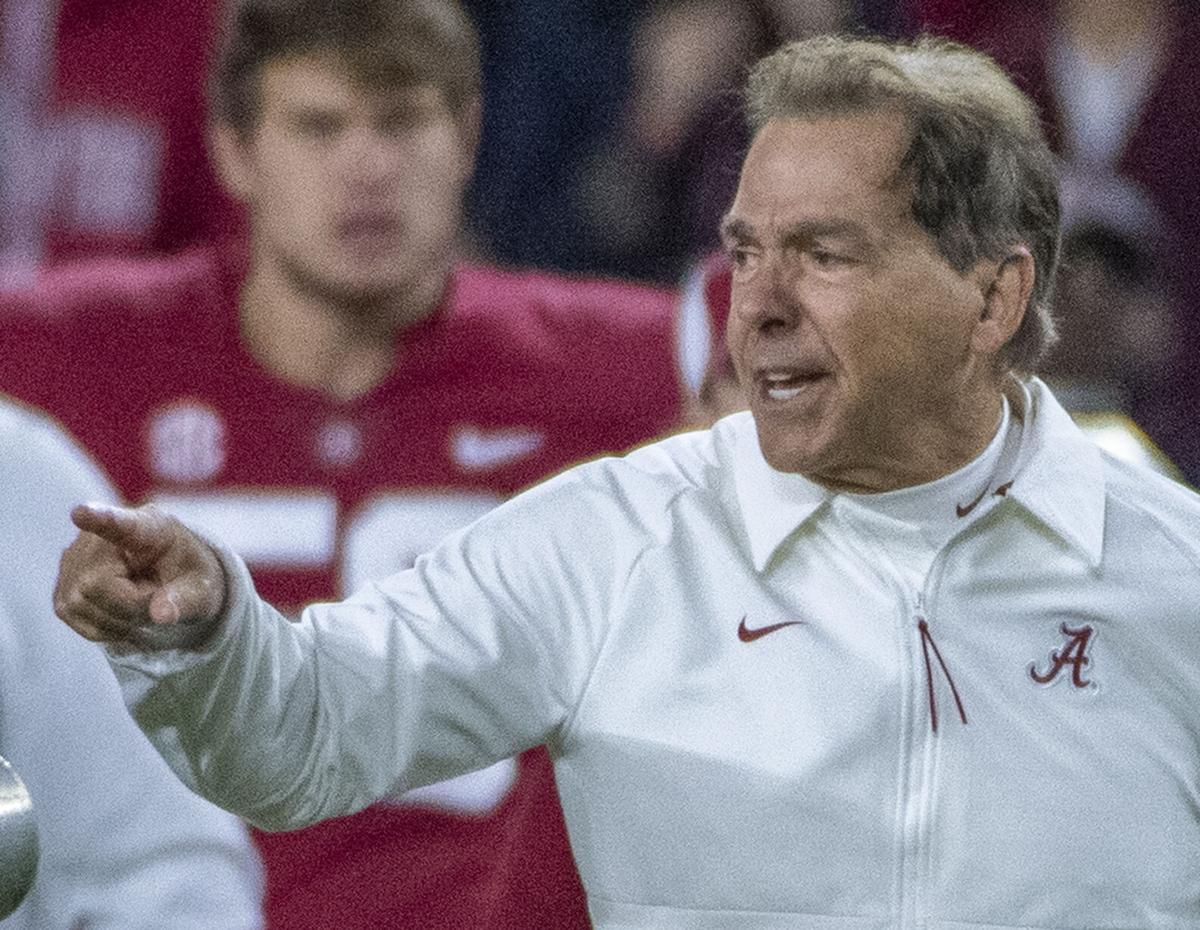 Alabama coach Nick Saban gives instructions to his players during the second half against LSU at Bryant-Denny Stadium on Saturday Nov. 6, 2021, in Tuscaloosa, Ala. Alabama won 20-14.

Alabama coach Nick Saban gives instructions to his players during the second half against LSU at Bryant-Denny Stadium on Saturday Nov. 6, 2021, in Tuscaloosa, Ala. Alabama won 20-14.

ATLANTA — The Georgia Bulldogs are favored by 6½ points over the Alabama Crimson Tide in Saturday's SEC championship game.

Makes sense. Georgia has been No. 1 most of the season. Its defense is harder to penetrate than a millionaire’s panic room. Its offense, which gets written off as pedestrian by comparison, has scored 30 or more points in every game except that season-opening 10-3 marshmallow toss with Clemson.

Alabama, by comparison, has struggled. The Crimson Tide has a loss (gasp!) to Texas A&M by three, and thin escapes over LSU by six, Arkansas by seven, and Florida and Auburn by two. Bama is an underdog for the first time in 93 consecutive games, which I believe goes back to Forrest Gump’s playing days.

Bama deserves its dog status in Saturday’s showdown, given the way these two teams have played this year. Georgia has won by an average of just under 34 points per game. Bama’s margin of victory checks in at just under 23 points per game.

Still, it’s Bama. It’s like making Dracula a 3-point underdog after dark. It just doesn’t compute. Especially when Georgia has managed to fritter away the past four decades without even one national championship trophy despite some thoroughbred teams.

Georgia the talented. Georgia the dominant. Georgia the Superteam, but whose Kryptonite has been named Alabama before. The last six times Bama and Georgia have met, the Bulldogs were ranked in the top eight. They lost every time, including 26-23 in the CFP championship game after the 2017 season on DeVonta Smith's overtime touchdown catch, and 41-24 last year.

“Alabama has ripped their souls out twice and kind of flexed on them last year,” said Rece Davis, host of ESPN’s “College Game Day” show.

Still, there is something in the Bulldogs’ corner that hasn’t been there before. I have a feeling the entire non-Crimson Tide loving college football world will have one thought in mind Saturday afternoon as it settles down to watch this typically epic SEC championship game struggle between No. 1 and No. 3:

The College Football Playoff is flawed but has been a huge leap forward in determining a national champion. It still has further to go with seemingly inevitable expansion, which is currently the subject of intense study and scrutiny by subcommittees of CFP committees and lots of thoughtful contemplation in oak-paneled board rooms.

The greatest knock on the whole process, aside from the guaranteed lack of access for the Cincinnati Bearcats of the world, is the repetitiveness of it all. The rounding up of the usual suspects. For years all we got was Alabama-Clemson, Clemson-Alabama and so on. Ohio State and Oklahoma have been repeat players to the delight of their fans but to the detriment of a system as a whole that looks as exclusionary as a gold-plated yacht club.

This season, things are different. Clemson is already out of contention. Oklahoma, too. Two-loss Ohio State didn’t even make the Big Ten championship game and should be a goner. Yes, Georgia made a CFP appearance four years ago, but no championships, remember? Despite all their soul-crushing defense this season, the Bulldogs still look like an underdog at heart because they’ve so often played championship football with one hand wrapped around their own throats. Heck, Georgia is only 3-5 in the SEC championship game, which includes a 1-3 record against LSU.

The only team still carrying the flag for the old stalwarts is Alabama. No. 3-ranked Alabama, which will be in with an upset over Georgia and out on its ear hole if it loses to the Bulldogs. Probably.

Alabama being out of the playoff is completely at odds with Crimson Tide fans’ world view. For the rest of us, it will be a breath of fresh air. A playoff with no Alabama? No Clemson? No Ohio State or Oklahoma? Debate all you want whether Cincinnati is better or more deserving, but it will be a welcomed change of pace.

It’s all up to Georgia. That’s the worry. The Bulldogs are much more used to being the team that goes, “Darn, that one got away” than winning these things. Remember another horror in the 2018 SEC championship game when Georgia led 28-14 in the third quarter before Alabama desperately put Jalen Hurts in at quarterback and rallied for a 35-28 win?

Yeah, that kind of thing. Georgia has been great. It looks like no one else is in the Bulldogs’ class and that this is their year, even with the slightly above average Stetson Bennett at quarterback. They remind one quite a bit of LSU's 2011 team. We all know how that worked out.

There’s always the sense Lucy is about to pull the football away and the Charlie Brown of college football is going to wind up flat on its back. Even though everyone not pulling for Alabama is probably on its side.