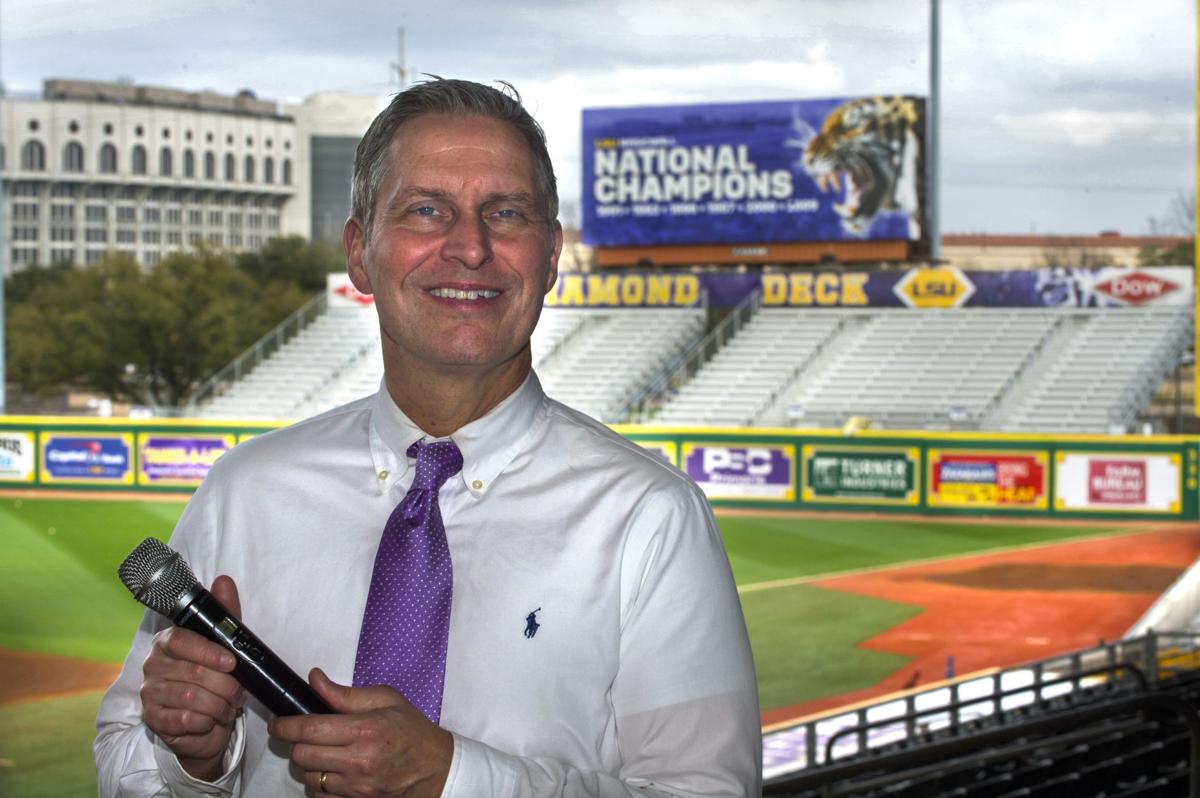 LSU baseball Sports Information Director Bill Franques, who is entering his 30th season with the program, photographed in a place he almost never is — the stands at Alex Box Stadium — Wednesday, Feb. 14, 2018. The 'Intimidator' billboard in right field lists the Tigers' six national championship seasons, all of which Franques was on board for. 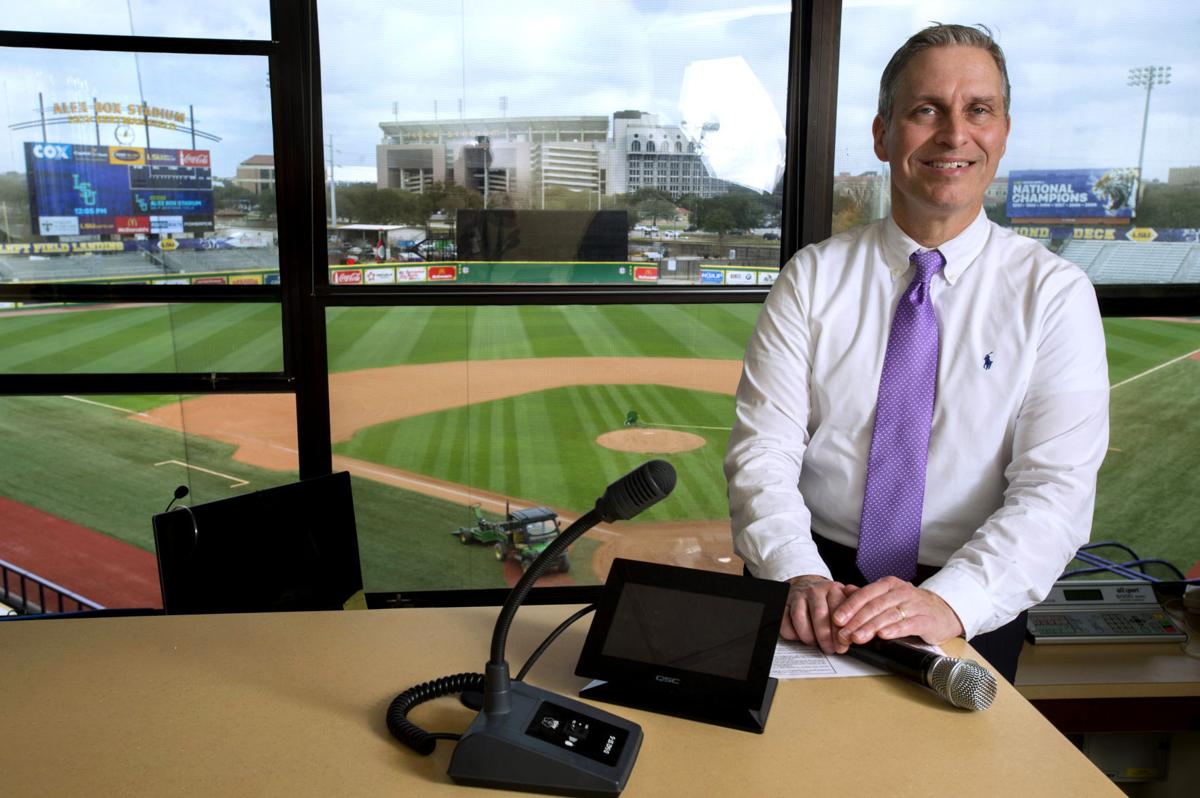 LSU baseball Sports Information Director Bill Franques, who is entering his 29th season as public address announcer for LSU baseball and 30th with the program, photographed in the P.A. booth he works out of at Alex Box Stadium, Wednesday, Feb. 14, 2018. 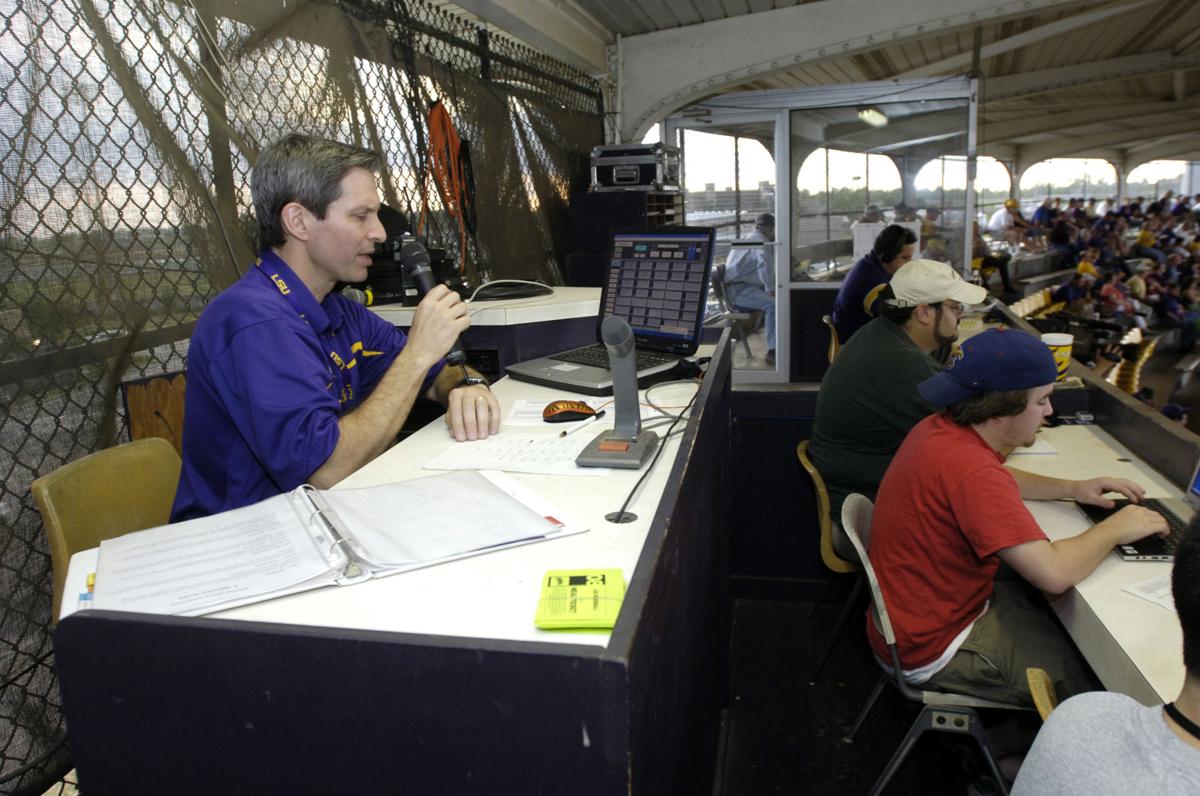 Bill Franques, in his perch in the old Alex Box Stadium, has served as the public address announcer for LSU baseball for seasons.

LSU baseball Sports Information Director Bill Franques, who is entering his 30th season with the program, photographed in a place he almost never is — the stands at Alex Box Stadium — Wednesday, Feb. 14, 2018. The 'Intimidator' billboard in right field lists the Tigers' six national championship seasons, all of which Franques was on board for.

LSU baseball Sports Information Director Bill Franques, who is entering his 29th season as public address announcer for LSU baseball and 30th with the program, photographed in the P.A. booth he works out of at Alex Box Stadium, Wednesday, Feb. 14, 2018.

Bill Franques, in his perch in the old Alex Box Stadium, has served as the public address announcer for LSU baseball for seasons.

Mellifluous. That’s the way someone once described the voice of the late Bob Sheppard, the long-time public address announcer for the New York Yankees. He was succinct and completely without fanfare, but as the word describes, pleasant to hear.

It is an appropriate way to describe LSU baseball P.A. announcer and Bill Franques, one for his love of language and two for his style of announcing. A style he patterned after hearing Sheppard’s voice cut through the background of stadium noise watching Yankees games on TV years ago.

They also used to call Sheppard “The voice of God.” People say the same of Franques, whose voice is the aural equivalent of pouring a rich, full-bodied cup of coffee over a microphone.

LSU’s home opener Friday night against Notre Dame marks the start of Franques’ 30th season as the Tigers’ team publicist, or sports information director — SID for short, as Russ Springer used to call him — and does color commentary on LSU road baseball games. It is his 29th season handling P.A. duties, something few SIDs do anymore, whether they’re named Sid or not.

Back when he started, it was hard for Franques to imagine he’d get through even one season.

The only companions Zack Hess desired after his last appearance in an LSU uniform were moonlight and his mind.

“I’ll never forget my first game in 1989 against TCU,” Franques said. “Ben McDonald was pitching. We won, and I remember getting into my car and turning onto Nicholson (Drive) thinking, ‘You’ve got to be kidding me — I have 55 more of these? And that’s just the regular season.’ ”

More than 1,900 games later, Franques, 54, is still at it. For LSU baseball fans, the loyal throngs who went to the old Alex Box Stadium for years and have been coming to the new “Box” for going on 10 seasons now, he’s the only voice they’ve ever known over the loudspeakers there. It’s hard to remember that he replaced long-time Baton Rouge radio personality Richard Condon for the 1990 season and has been behind the mic ever since. Franques has become as much a part of the fabric of LSU baseball as hot dogs, peanuts and victory laps around the ballpark as the Tigers head off for another trip to the College World Series.

“Of course, the memories are created by the players and coaches on the field,” Franques said. “Hopefully I can add to that with the presentation of the game.”

One big difference between the new Alex Box compared to the old is barbeque, or rather, the lack of it. Tailgaters surrounding the old Alex Box used to bring delicious-smelling platters to the press box, along with questions about the game or whether Franques had just called out their lucky number or not. Although the move to the current ballpark was necessary if LSU was to keep pace with its baseball rivals, as for many of us there’s still a part of Franques that is nostalgic for the old stadium and its shabby grandeur.

“Of course, the old Box didn’t have any modern amenities, but it had so much charm and ambiance,” he said. “The fans were right there on top of the field. Where our press area was, we were literally just part of the grandstand at the very top. It was like we were sitting with all the fans.

“This will be the 10th year of the new Box, and from a logistical standpoint it’s much easier to operate the press area, the radio and TV booths, public address, the scoreboard. But I do miss the connection we used to have with the fans. We’re in a legitimate press box that isolates us from the fans.”

Well, that’s not entirely true. There is that one inning per game when kids come up to the press box and announce the LSU batters.

“Some kids barely speak, and some kids want my job,” Franques said. “There’s been a few who didn’t want to leave.”

Franques brushed away the thought that three decades with LSU baseball has turned him into an institution, but that’s what he is. He found out the full measure of what that meant when he was serving as master of ceremonies at LSU’s First Pitch Banquet last month at Celtic Studios.

“Near the end coach Mainieri addresses the crowd, and part of it is acknowledging his assistant coaches and members of the support staff. He began to acknowledge me as he always does, and he said some very nice things, which I really appreciated. Then he continued to speak, longer and longer, and got more detailed.”

Mainieri then asked one of LSU’s sports information student assistants to bring out an enlarged replica of the LSU baseball ticket for the Tigers’ May 5 game against Arkansas. The ticket has Franques’ face on it, something LSU’s graphics department kept off his desk the day he was proofing this season’s tickets. It will be Bill Franques Day at The Box.

“Everything he does is first class,” Mainieri said of Franques. “When I introduce him to people, I call him the best in the business, and I mean that sincerely. He’s a great representative of LSU and knows just about everything about LSU baseball.

“Getting to know him has been one of the highlights of my 12 years here.”

There have been so many highlights during Franques’ tenure with LSU baseball, a timeline that includes all six of the Tigers’ national championship runs. Asked who were the best players he ever saw in the purple and gold over the past 30 years, and he goes with two recent Tigers: Alex Bregman and Aaron Nola.

Over the years, Franques has sprinkled in a few LSU basketball games — he’s done five this season filling in for Dan Borne, who has been dealing with some health issues — and a couple of football games. Hopefully, when Borne someday retires from the Tiger Stadium P.A. booth where he’s been since 1986, LSU will hand the microphone to Franques.

“If the opportunity came about, I’d be honored,” Franques said.

For now, he’ll be what he’s been for nearly 30 years: the voice of The Box.

LSU baseball will be without Hunter Feduccia against Notre Dame, prompting a flurry of lineup moves

When the LSU baseball team takes the field for the first time Friday against Notre Dame, it will be with a drastically different look than expected.

LSU baseball sports information director Bill Franques, now entering his 30th season as the Tigers’ publicist and his 29th behind the public address microphone, recalls some of the most memorable games and players during his tenure:

• Warren Morris home run, 1996 College World Series: Franques, of course, wasn’t on the P.A. mic in Omaha but was the color commentator on radio with then LSU play-by-play announcer Jim Hawthorne when Morris hit his legendary two-run home run to beat Miami, 9-8. (Quick quiz: Who was on third base when Morris’ hit the homer? Brad Wilson, who led off the ninth inning with a double.)

• 1990 NCAA South I Regional: LSU and Southern California played three epic one-run games in this old-format six-team regional, with the Tigers winning two of three to advance to their fourth College World Series. “There was such intensity,” Franques said. “I think that’s when LSU baseball really arrived in the minds of LSU fans.”

• The last game at old Alex Box: LSU lost 11-5 to UC Irvine in Game 1 of the 2008 super regional but rallied to take Game 2, 9-7. Game 3 was no contest, as LSU hit seven home runs, three straight in the first inning by Blake Dean, Micah Gibbs and Matt Clark, in a 21-7 romp. “I’ve heard a lot of noise in the 20 years I was there, but that was unreal,” Franques said. “The place was so raucous. I literally had chills every time a ball flew out of the park.”

• Aaron Nola vs. Jonathan Gray: Current major league pitchers Nola of LSU and Gray of Oklahoma squared off in Game 1 of the 2013 NCAA super regional at Alex Box Stadium. Gray struck out nine Tigers in 7.1 innings but Nola spun a complete game two-hit shutout, as LSU won 2-0 with two runs in the eighth. LSU routed the Sooners 11-1 the next day to advance to the CWS.

What does LSU's Dave Aranda think of Tigers' 11 defensive signees? He tells us