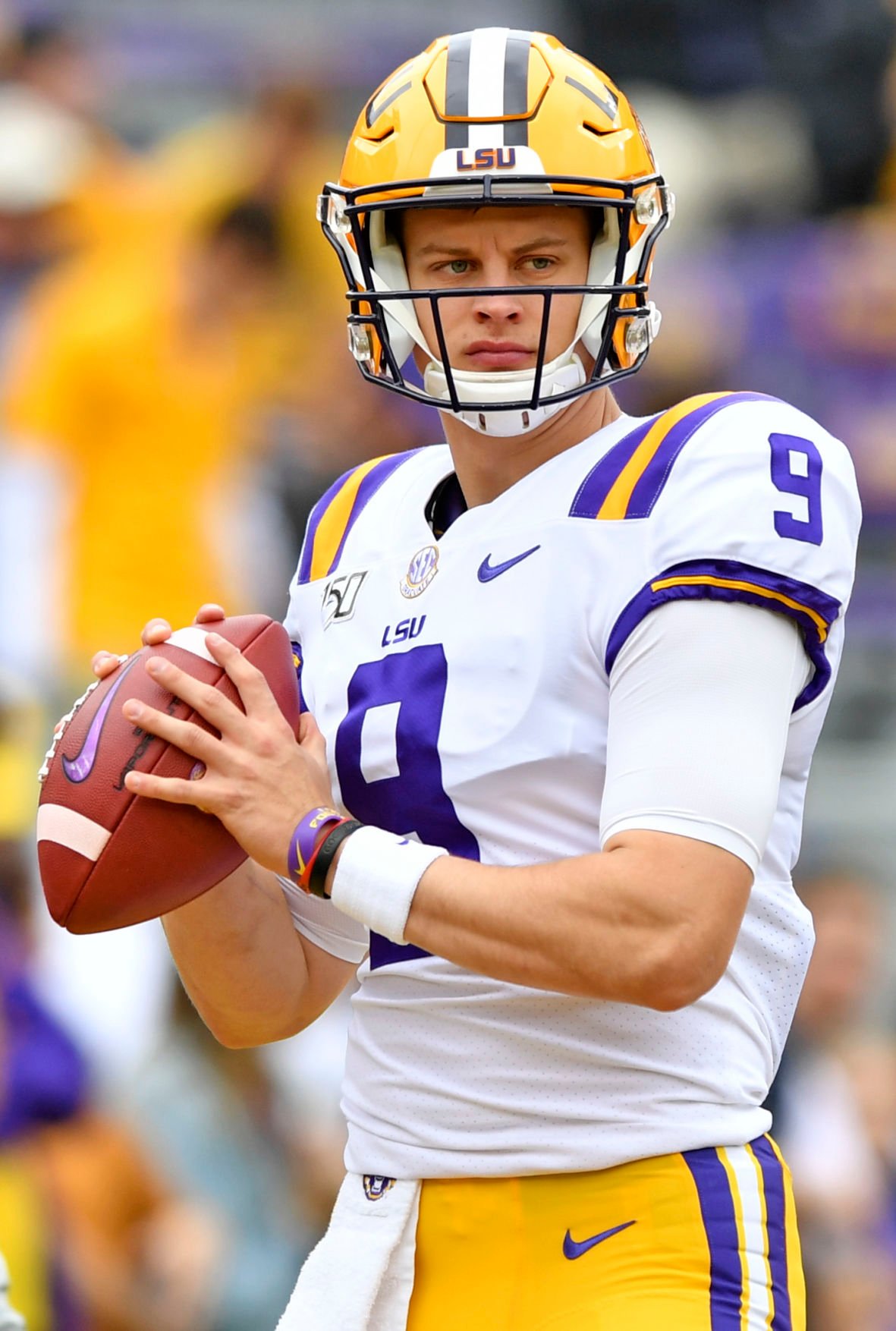 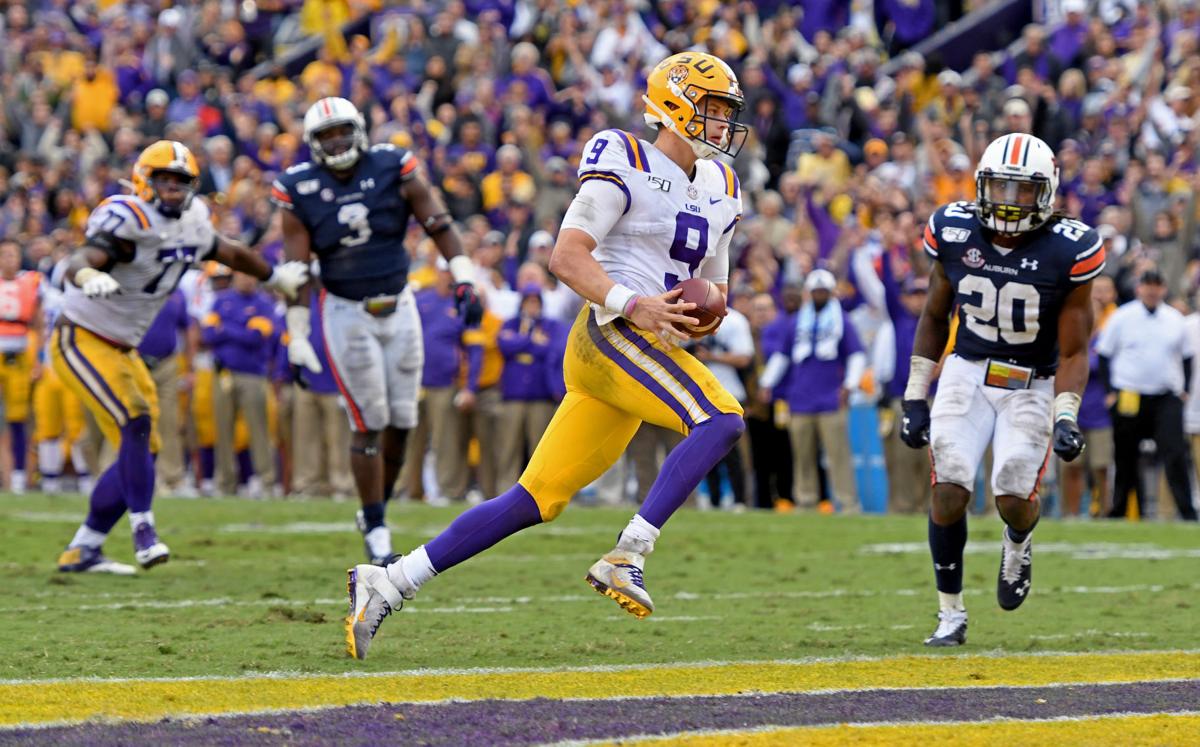 LSU quarterback Joe Burrow (9) scampers into the end zone for a 7-yard touchdown in front of Auburn defensive back Jeremiah Dinson (20) during the second half of LSU's football game against Auburn at Tiger Stadium Saturday Oct. 26, 2019, in Baton Rouge, La. LSU won 23-20.

LSU quarterback Joe Burrow (9) scampers into the end zone for a 7-yard touchdown in front of Auburn defensive back Jeremiah Dinson (20) during the second half of LSU's football game against Auburn at Tiger Stadium Saturday Oct. 26, 2019, in Baton Rouge, La. LSU won 23-20.

Burrow talked about the matchup, how his spread offense could fare better against the Tide, embracing challenges and the possibility of President Trump being in attendance at Bryant-Denny Stadium.

Here’s a complete transcript of his nine-minute interview session:

Q.: On getting to work on Alabama after having the weekend off?

J.B.: We had the bye week, so we worked on them a little bit last week. You try to approach it like any other game, obviously it’s not. You do the same routine you do every week: you watch film the same way, you approach practice the same way and obviously with the bye week before you have an extra week to prepare.

Q.: Is there more motivation going into a game like this even though you don’t have a history with Alabama that other players may have?

J.B.: I wouldn’t say more motivation. I mean we’re playing the SEC, we’re undefeated. You know, we have a chance to do special things here and we have the last eight weeks, too, so if you need motivation, then you’re in the wrong place. You’ve got motivation all through the year.

Rabalais: Yes, LSU-Alabama 'Game of the Century, Part Deux' will be better than 2011

There are those rare occasions when the sequel is considered better than the original:

J.B.: I think they have really, really good coaching. They have really good plans every week. They put their defenders in the best positions to be successful. They know their skill sets and can hide the weaknesses very well. Then, our job is to take advantage of those weaknesses that they show.

Q.: You talked when you got here about earning the trust of your teammates. Do you feel it’s important to remain even-keeled this week so they see that coming from you?

J.B.: Yeah, we’re just approaching practice this week like we have the last eight weeks. We practice very well, we’ve had very efficient practices and we’re been really on point and we’re just going to keep that up this week.

LSU quarterback Joe Burrow has been named one of 20 semifinalists for the Maxwell Award for Collegiate Player of the Year, the Maxwell Footbal…

Q.: What about the opportunities that you have this year as opposed to last year when the offense struggled, now when the defense takes someone away you have other looks?

J.B.: I think we have with Clyde (Edwards-Helaire) and Thad (Moss) and then some of our receivers that back up Justin (Jefferson) and then Terrace (Marshall) and Ja’Marr (Chase), I think we have eight to nine guys that you have to defend at any time. When you have the receivers that we do and then when we have Thad and Clyde in the game in the passing game, you got to pick your poison. We’ve got five guys on the field that can make you pay if you don’t cover them.

Q.: You try to compartmentalize everything, every team, but how excited are you to take this offense against this team?

Q.: What is it about Clyde that makes him such a good running back?

J.B.: You see the NFL game, as a running back you don’t get on the field unless you can catch passes … and that’s what Clyde does best. He comes out of the backfield and makes linebackers cover him and when they’re thinking he’s going to exit the backfield, you hand it off to him and he runs for 60 (yards) or 40. So, he’s a super-versatile player that not a lot of backs are nowadays.

Q.: Is there an increase in his motor, especially when he sees holes like he did against Auburn?

J.B.: No, no increase. He’s always 100%. I don’t think the great ones don’t really click it in gear; they’re always in gear — and Clyde is one of the great ones.

For Alabama, a mountain of injuries: No Tua at practice, and he's just 1 on a long list

TUSCALOOSA, Ala. — The doors to Alabama's indoor practice facility opened. Reporters filed in, peeking, searching for the quarterback who was …

Q.: Coaches from LSU and Alabama are seemingly using the slant pattern more effectively, how do you and your receivers use that as a weapon?

J.B.: It really depends on the defense you’re playing, A lot of the teams we’ve played this year have played this kind of off-quarters theme to the field. They give up the quick slants to No. 2 (Jefferson) in the three-by-one (receiver set), so we’ve taken advantage of that. It seems like just about everyone in the SEC plays that defense, so whatever the defense gives us we’re going to take. Sometimes, it’ll be the slant. Sometimes, it’ll be an out. It just depends on what the defense is giving away.

Q.: How do you guys make the call at the line of scrimmage?

J.B.: It comes from the sideline, it’s just a game plan thing. We always have our quick-game package that we go into the game with.

Rabalais: Joe Burrow's dad Jimmy is loving retirement ... it isn't hard to figure out why

When Jimmy Burrow decided to retire after three decades coaching football, he figured it would be worth it to watch his youngest son play foot…

Q.: Don’t know if you heard what your (head) coach said about you today, but he said that you were one of the top five recruits, I think he meant players, in the history of this program. What do you think your impact is?

J.B.: I just try to bring some toughness and leadership to the team. I don’t know about the top five or the greatest players in LSU history. I don’t know about all that, but I just try to bring 100% every day and try to prepare the way that I think enables us to be successful on Saturdays. So, I’m going to bring toughness and I’m going to bring leadership, and I think that’s all you can ask for from a quarterback.

Q.: Knowing how evenly-matched these teams are, a lot of these big-times games come down to two or three plays. How prepared does this team feel based on what you’ve gone through, to handle those two or three plays in that moment?

J.B: I think we have a really mature team that watches film, and that could be the difference in those two or three plays because you’re going to get a look that you haven’t seen. They have two weeks to prepare for us, so we’re going to get some looks that we haven’t seen from them. Being prepared, knowing the base rules of the offense, and watching that film is going to enable you to be ready for those two or three plays that need to be made.

LSU quarterback Joe Burrow on Wednesday was named one of 10 finalists for the Johnny Unitas Golden Arm Award.

Q.: With LSU having lost eight in a row to Alabama, do you think there’s a mental hurdle that teams need to get over going into a matchup like this from a confidence standpoint knowing that you can score points?

Q.: You mentioned this a little, but how often in a game are you guys seeing stuff that you haven’t seen and how well have you guys adapted to that?

J.B.: We’ve seen it in every game this year, every team has had something for us just because we’ve been so successful. A lot of teams think that they need to bring something new out. We’ve seen it in Auburn and Florida and Texas and every other game that we’ve played this year, so we’re going to have to be ready. You have your game plan going in and then you have to make your adjustments, really after that first drive seeing what they’re in.

Austin Carr hadn't even played a game in a Saints' uniform when he realized just how intense the rivalry with the Atlanta Falcons is.

Q.: In what way does this offense make that easier to make the transition?

J.B.: That’s a good question because we have our base stuff. But we’ve also game-planned against our defense in fall camp and spring ball, so we have a lot of stuff in our back pocket that we can always go to. If you see someone plays off and then you come into the game and they press. It’s not necessarily on the call sheet or the game plan and Coach E (Ensminger) and Coach Joe (Brady) do a good job of recognizing that and kind of pivoting of the game plan to what it needs to be.

Q.: What kind of difference has Coach Brady made, or has it kind of been kind of a perfect storm of you, him, Ensminger?

J.B.: I think that’s the right word: the perfect storm. Being with all these guys for an extra year, Ja’Marr, Terrace, Justin coming back, Clyde emerging, the O-line all five of them coming back and emerging as one of the top groups in the country and then you add in Coach Joe and Coach E working together on the game plan, it’s been something special for us this year. We have all the confidence in the world in each other and I have all the confidence in the coaching staff to scheme my teammates. So I think that’s what the perfect storm has been, just getting together, extra work and confidence in each other.

Does LSU need divine intervention to end its eight-game losing streak to Alabama?

Q.: There’s a report the president may be there Saturday.

Q.: How does this game stack up to like a Michigan-Ohio State game?

J.B.: (Laughter) I knew I was going to get that one today. You know, the Ohio State team up north is a real good one, but it’s kind of hard to answer that when you’re kind of in the middle of both of them. That’s a question for me in two years when I look back and reflect on it.

LSU linebacker Michael Divinity no longer on team: 'I am sorry I can't be on the field'

LSU linebacker Michael Divinity has left the team for "personal reasons," coach Ed Orgeron said Monday, which means the Tigers will be without…