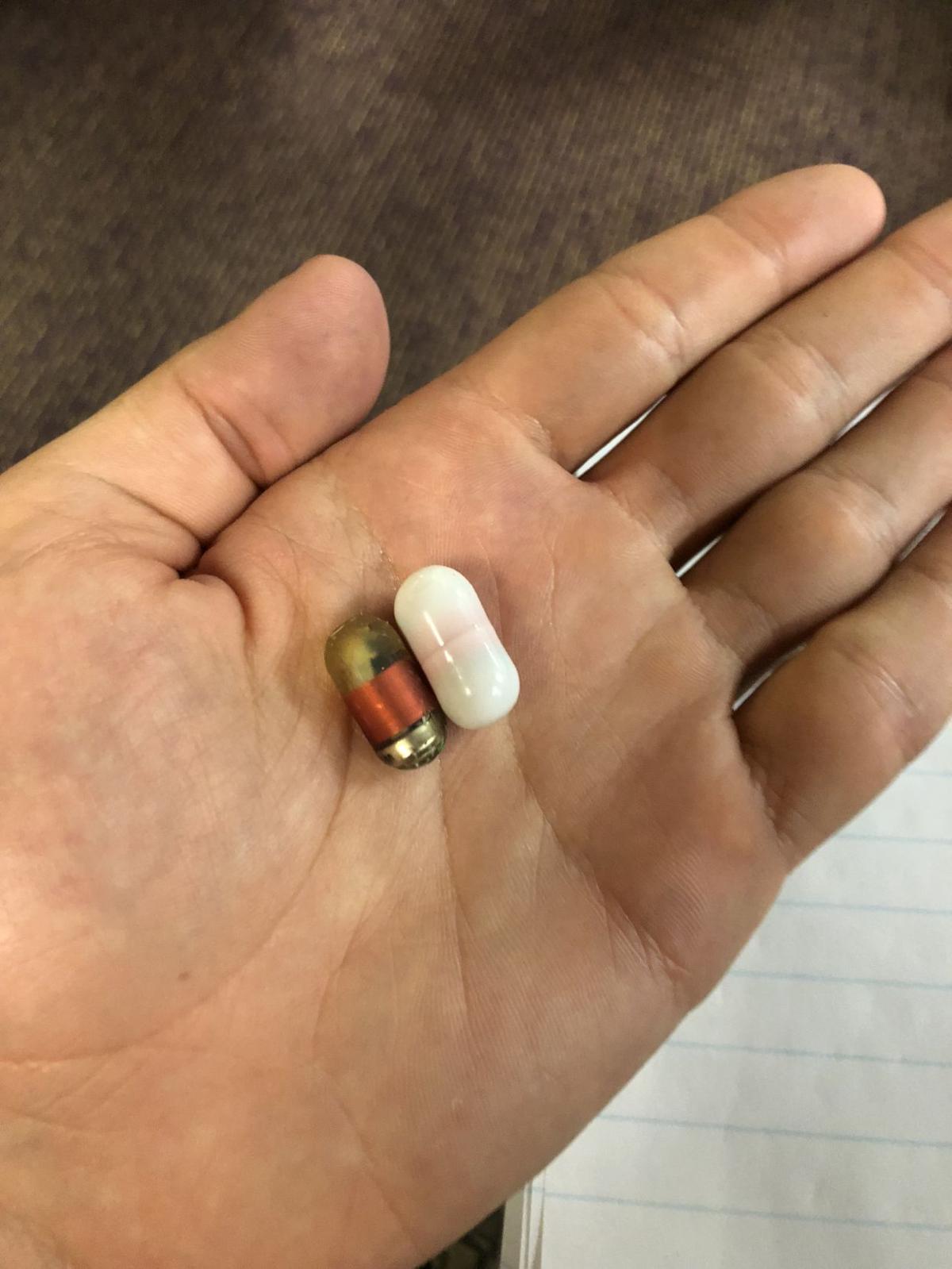 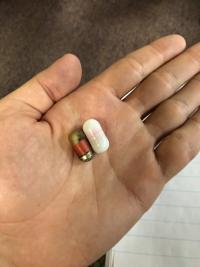 Each CorTemp pill costs $40. The electronic thermometer (left) is contained within the capsule (right). A micro-range radio signal connects the pill to the CorTemp reader. 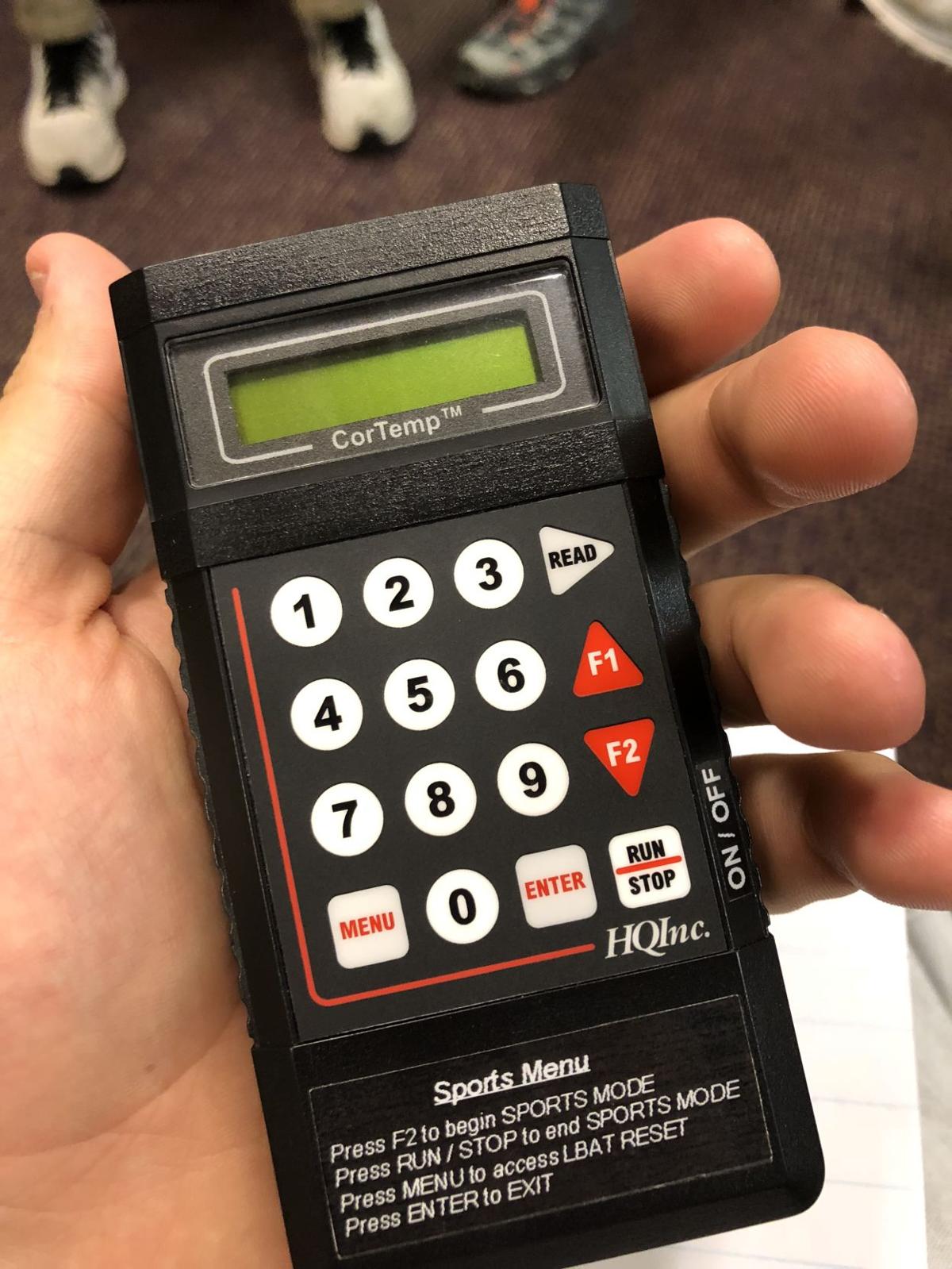 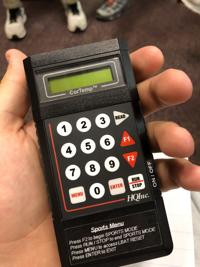 The CorTemp reader picks up the signal from the pill and displays the temperature. 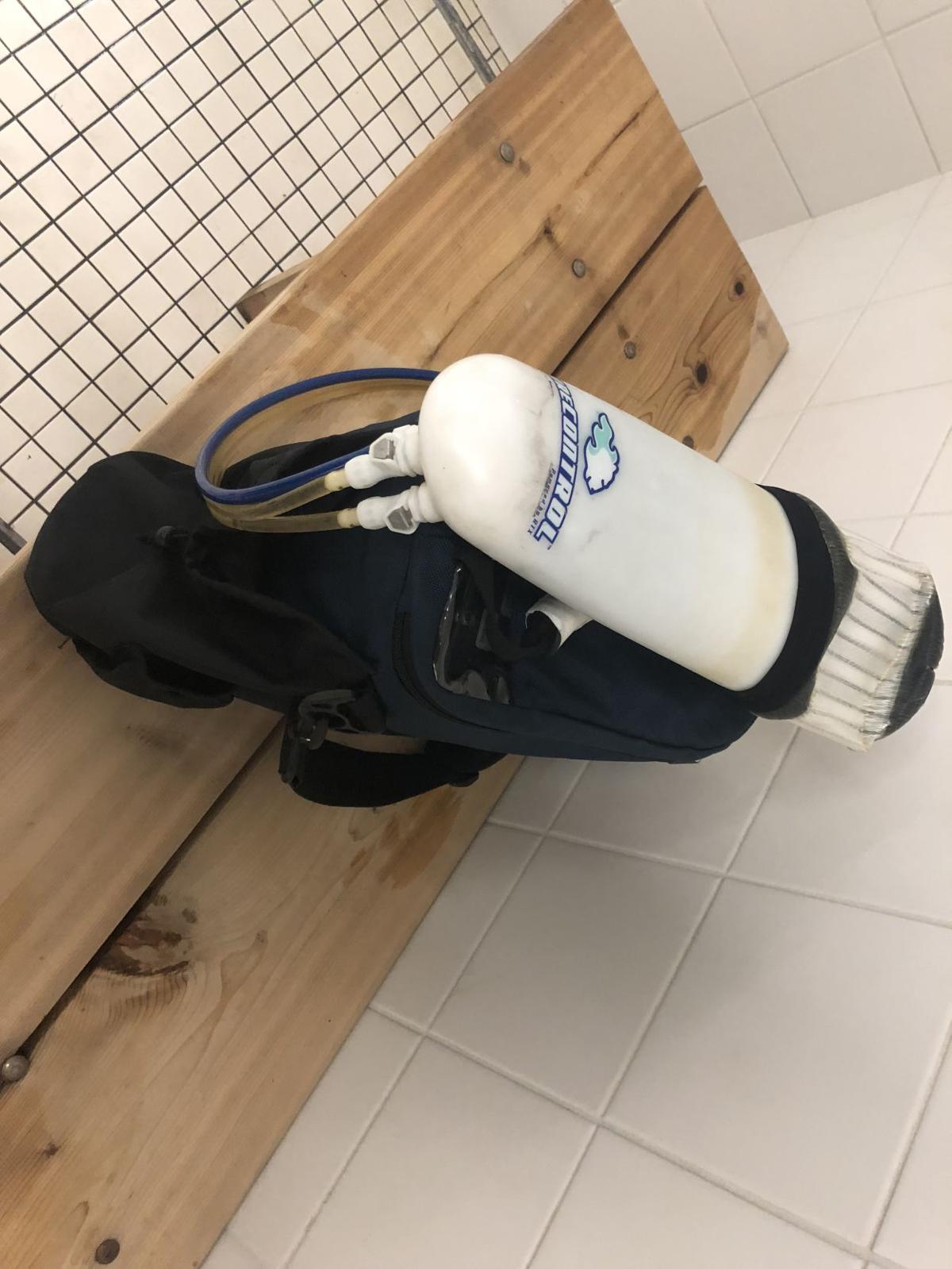 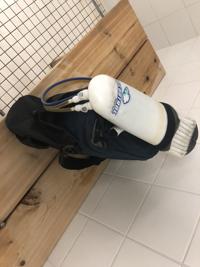 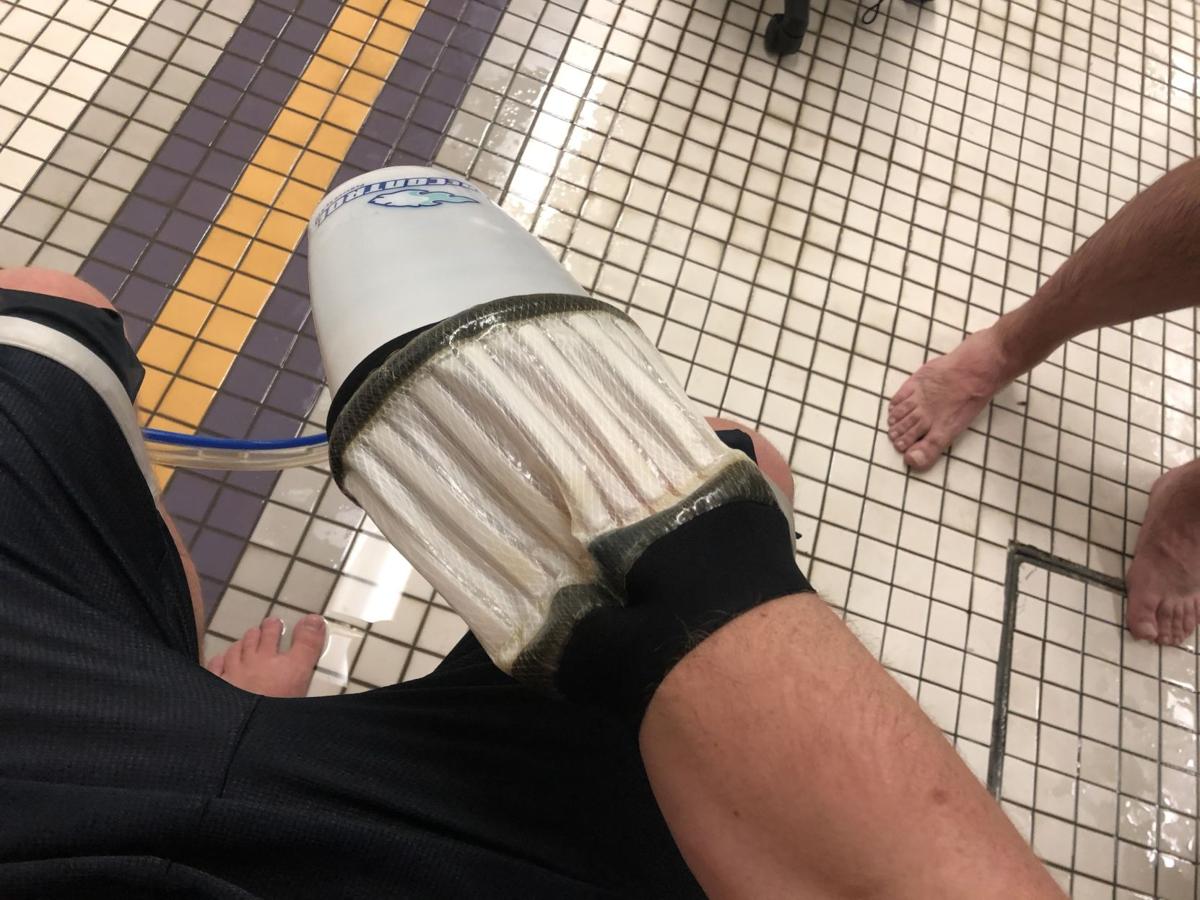 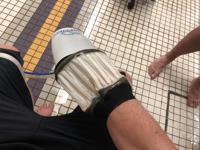 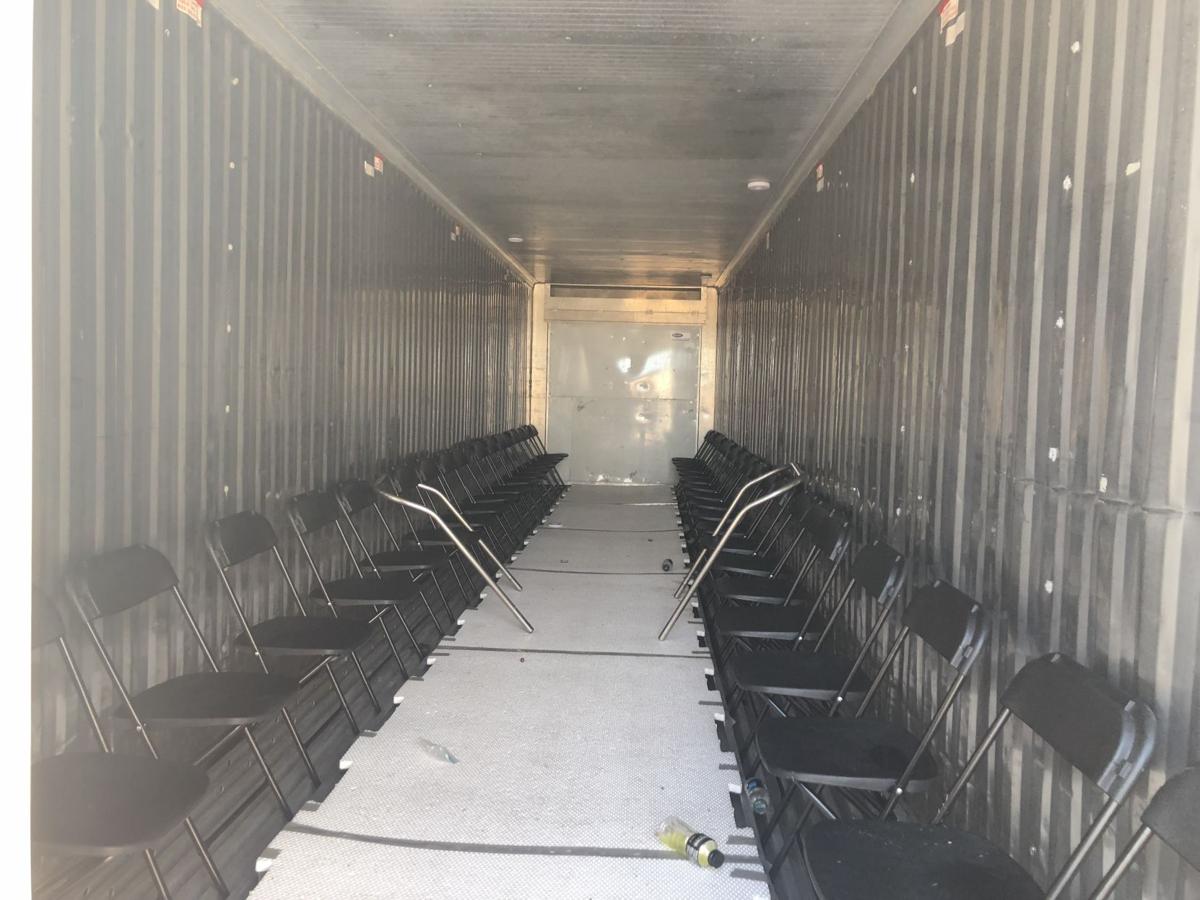 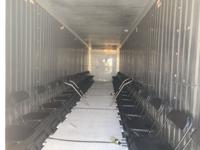 The "Boudreaux Box" is a recent invention by LSU equipment manager Paul Boudreaux and the LSU research staff that is intended to cool players down quickly. It is a 40-foot-long air-conditioned shipping container. 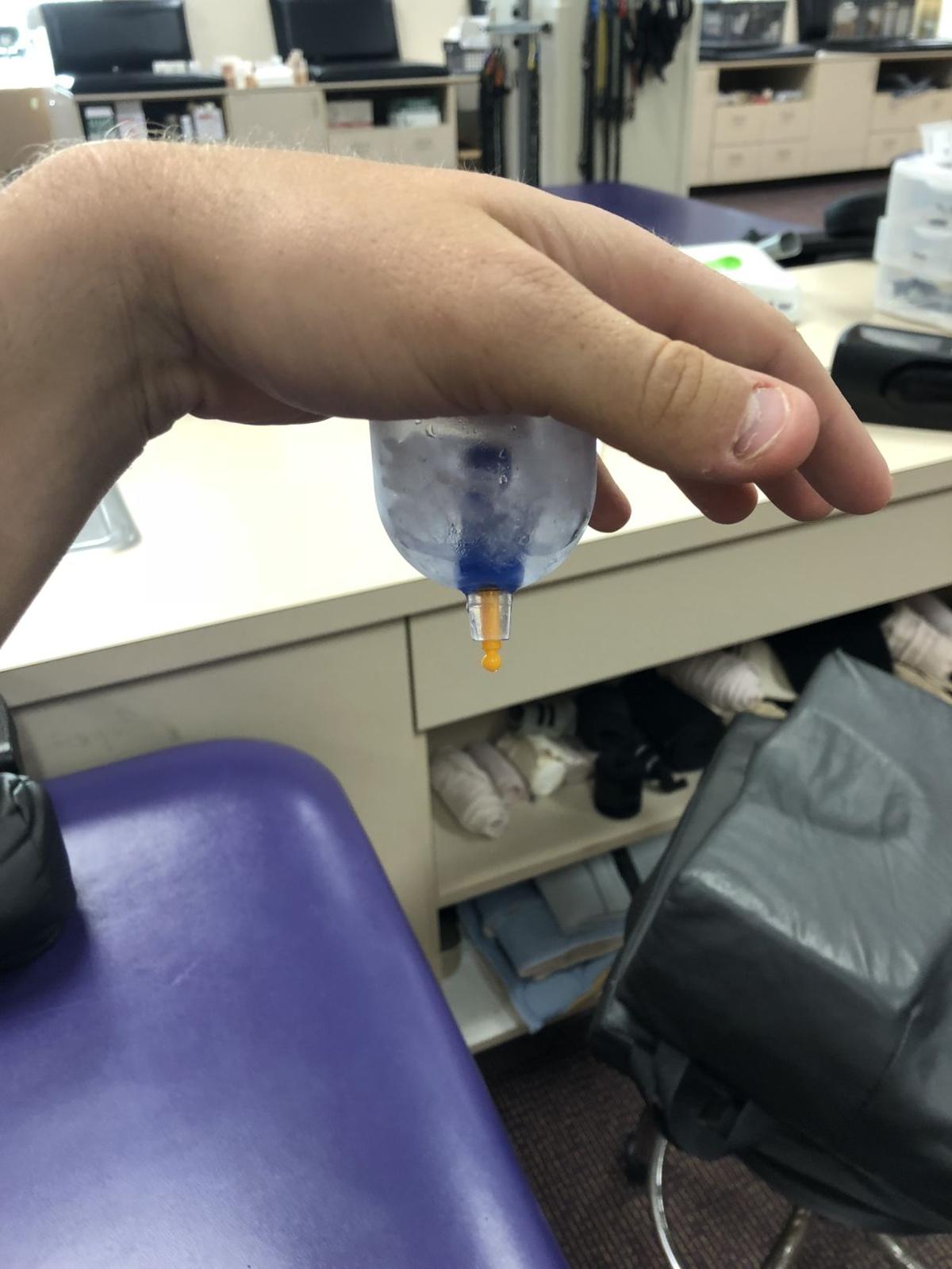 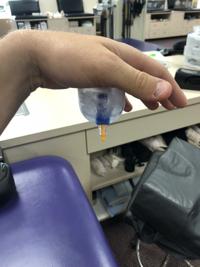 The cupping method was inspired by Michael Phelps' usage of the ancient Chinese treatment, which draws blood to specific areas. 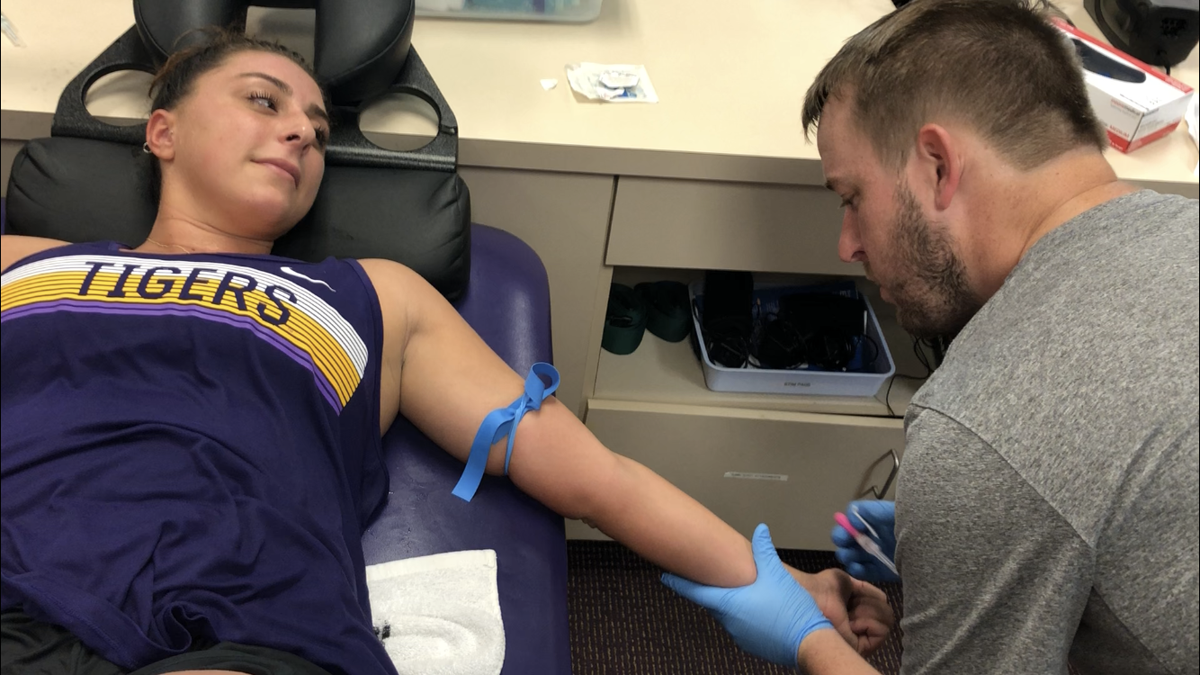 Each CorTemp pill costs $40. The electronic thermometer (left) is contained within the capsule (right). A micro-range radio signal connects the pill to the CorTemp reader.

The electronic pill went down easier than expected.

A few gulps of water washed it down, drowning the beginnings of the thought, “What the hell am I getting into?”

There was plenty of time to consider that — six hours, exactly — as the pill wriggled its way into my lower intestine, where the LSU sports scientists could get an accurate read of my core temperature.

Nathan Lemoine greeted me in the training room on a Sunday during preseason camp. In his left hand, he held a device the size of a small brick.

Lemoine is the athletic training staff’s sports science research associate — a position funded nearly a year ago by the LSU Health Sciences Center in New Orleans to bolster the ongoing medical studies within LSU athletics.

Within the past two years, the LSU athletic training staff has formed partnerships with local hospitals and the U.S. Department of Defense, and the Tiger Athletic Foundation set up a separate funding account in July 2017 so people could specifically donate to the staff’s research projects.

“We have been inundated with all these technologies,” athletic training director Jack Marucci said. “So it’s great to have all these minds that we can bounce off of and really decipher what we want to do.”

Lemoine raised the device level with my abdomen.

Somewhere down there, stomach acid was tearing away the white coating of the $40 pill, revealing the copper-colored thermometer that held a micro-range radio signal.

Lemoine tapped a few buttons on the device, and its monitor blipped a temperature: 99.05 degrees.

Normally, 98.6 is ideal, Lemoine explained, which lasts just about until anyone steps outside — especially football players who trudge into the autumn heat wearing several layers of pads.

Once a player’s internal temperature climbs above 104 degrees, Lemoine said, the player is at risk of suffering a critical bodily breakdown.

The LSU athletic training staff began studying internal temperature with CorTemp pills three years ago, and in addition to collecting data on players during practices, Lemoine and three other staff members — Derek Calvert, Matthew Bumgardner and Gabby Arancio — conduct occasional personal experiments to find out the best methods to bring down internal temperature.

Because athletes' medical information is private, I was an ideal test subject for this story.

Lemoine explained that he and I were going to test five cooling methods:

“So how are we getting our temperatures up?” I asked.

Lemoine pointed to three pools on the other end of the training room.

A few minutes after submerging into a heated pool, I was starting to think scientific experimentation was both a relaxing and pleasurable experience. Then, Lemoine checked his stopwatch and the group moved to another pool. It was significantly hotter, and I felt like a crawfish who just noticed the propane tank flipped on.

“Yep, that’s hot!” Calvert said. I waded over to Lemoine, and he pointed the CorTemp reader at my reddening stomach: 101.21 degrees.

Any consideration for pleasure vanished in the cold tub.

One after another, we shiver-shimmied through the 60-degree water toward Lemoine, and I watched my internal temperature drop 0.74 degrees over seven minutes.

“Nearly a tenth of a degree per minute is substantial,” Lemoine explained as we returned to the first heated pool. Dropping an athlete’s internal temperature by a single degree could be potentially life-saving. The micro-change also stays well out of range of hypothermia, which occurs when a person’s internal temperature drops below 95 degrees.

Mostly, athletic trainers are combatting muscle cramps in athletes who quickly become dehydrated when they sweat a lot.

In LSU’s 27-23 home win over Auburn last season, both teams marched into a sweltering 92 degrees in the middle of October.

Normally, teams would be at risk of losing an important player for an entire possession if he cramped up and had to be treated with an IV. LSU didn’t have to hook a single player up to an IV the entire 2017 season.

Lemoine tossed me a bottle of sports drink. The letter ‘M’ had been scribbled on the cap, which had its seal twisted loose.

The drinks had been infused with MyHy — an invention of former LSU quarterback Matt Flynn — which boosts fluids with concentrated sodium. The LSU athletic staff had discovered, through a separate sweat study, that their football players were losing more than 10 grams of sodium in a two-hour practice. The average sports beverage contains just 250 milligrams of sodium per 20-ounce bottle — not nearly enough to account for the 10,000 milligrams the athletes were losing.

“It’s all but eliminated the cramping issues we’ve had here,” Lemoine said.

It tasted like a stronger version of a Sonic’s Ocean Water.

The handbags each contained a thermos of ice water, plus a motor that pumped the ice water into and out from a plastic bag that lined the inside of what can be best described as a hard-plastic mitten.

These were the CoreControl gloves.

I sat on a bench, and Arancio helped slipped the glove’s elastic band up to my right forearm. I flipped the motor on, which began a slight vacuum inside the glove, and the ice water began to flow through the tubes. I couldn’t notice an immediate temperature change, and Lemoine said I wasn’t supposed to.

The CoreControl is intended to enhance the body’s natural heat extraction. There are certain surfaces on the human body, including the palms, where blood is pumped to release heat from the body. The glove’s vacuum and controlled temperature helps that process along.

“It also eliminates the body’s reaction to instant cold, like shivering,” Lemoine said, “which is intended to warm you up.”

The glove had mixed results. My internal temperature rose from 100.94 degrees to 101.04 over seven minutes, before eventually dropping 100.54 upon 16 minutes.

Calvert’s results were more radical. His internal temperature dropped by an average .08 degrees per minute — comparable to the results I experienced in the cold tub.

It’s results like those that have led the LSU athletic training staff to use the CoreControl gloves on the sidelines during games, but Lemoine said there is still not yet enough data to know exactly how effective the method is in relation to IVs.

The next cooling method was not nearly as portable.

After another round of hot tub baths, we walked across the outdoor practice field and climbed into the Boudreaux Box. I sat in one of the plastic folding chairs that lined the walls of the shipping container and tried to listen to Lemoine over the echoing buzz of the air conditioner.

The concept of the box was simple: Move from a hot environment into a colder one. We sat in a brisk 50 degrees, although the contraption could create gusts as low as 22.

Ten minutes passed, and my internal temperature dropped 0.38 degrees — a less significant rate than with the tub or the glove.

Perhaps if the Boudreaux Box’s temperature was set colder, the change would have been more drastic. But it was never intended for emergencies. Players climb into the space during breaks in practice, and the slight drop in temperature gives them “an invigorated feeling,” Lemoine said.

As we walked back across the practice field for another hot tub round, I looked at Lemoine and said: “I don’t even know whether I’m hot or cold anymore.”

I’ll spare you the details on the IV portion (you know, needles). There was an average drop in temperature of .03 degrees among the training staff. The average was less productive than the consensus CoreControl average (0.05 degrees), although Lemoine said IVs still have the additional hydration benefit of injecting fluid directly into the bloodstream.

I watched them with a suction cup filled with ice attached to my palm. Lemoine’s idea was inspired by Michael Phelps’ usage of cupping during the Rio Olympics in 2016. The suction draws blood to specific areas, and the ancient practice is thought to speed healing to those areas.

If the blood was drawn to a cold source, Lemoine hypothesized, perhaps it would cool off the rest of the body.

My temperature rose 0.27 degrees over 11 minutes.

“It was a new idea,” Lemoine said later. “But not at all practical.”

I gathered my clothes and walked toward the door.

A thought occurred as I left, but I reconsidered asking.

They probably didn’t need their pill back.

Comb through the data from LSU’s first two football games and you are left with one glaring fact: This is not a good offensive team.