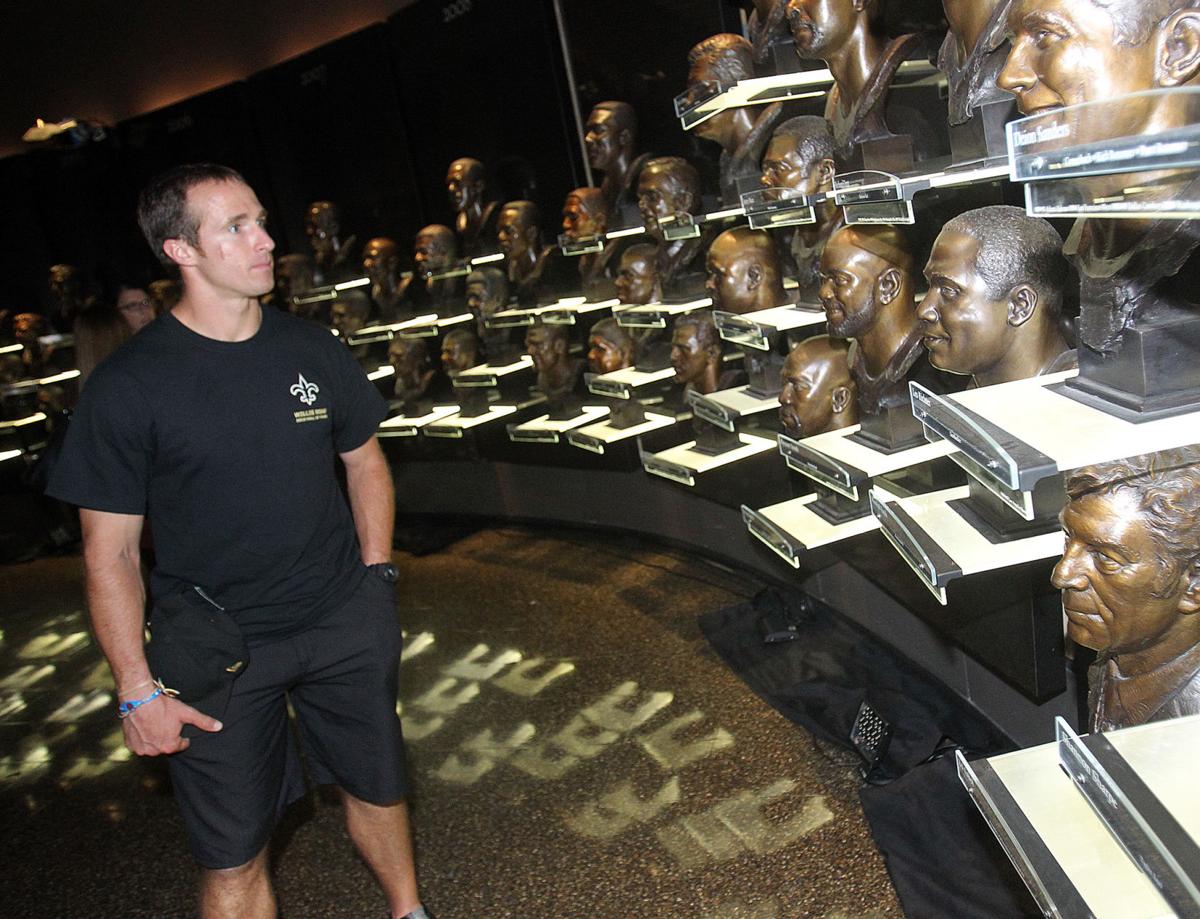 Saints quarterback Drew Brees looks at the busts of Hall-of-Famers as the Saints visit the Pro Football Hall of Fame in Canton, Ohio on Saturday, August 4, 2012. (Michael DeMocker, Nola.com / The Times-Picayune) ORG XMIT: 58585 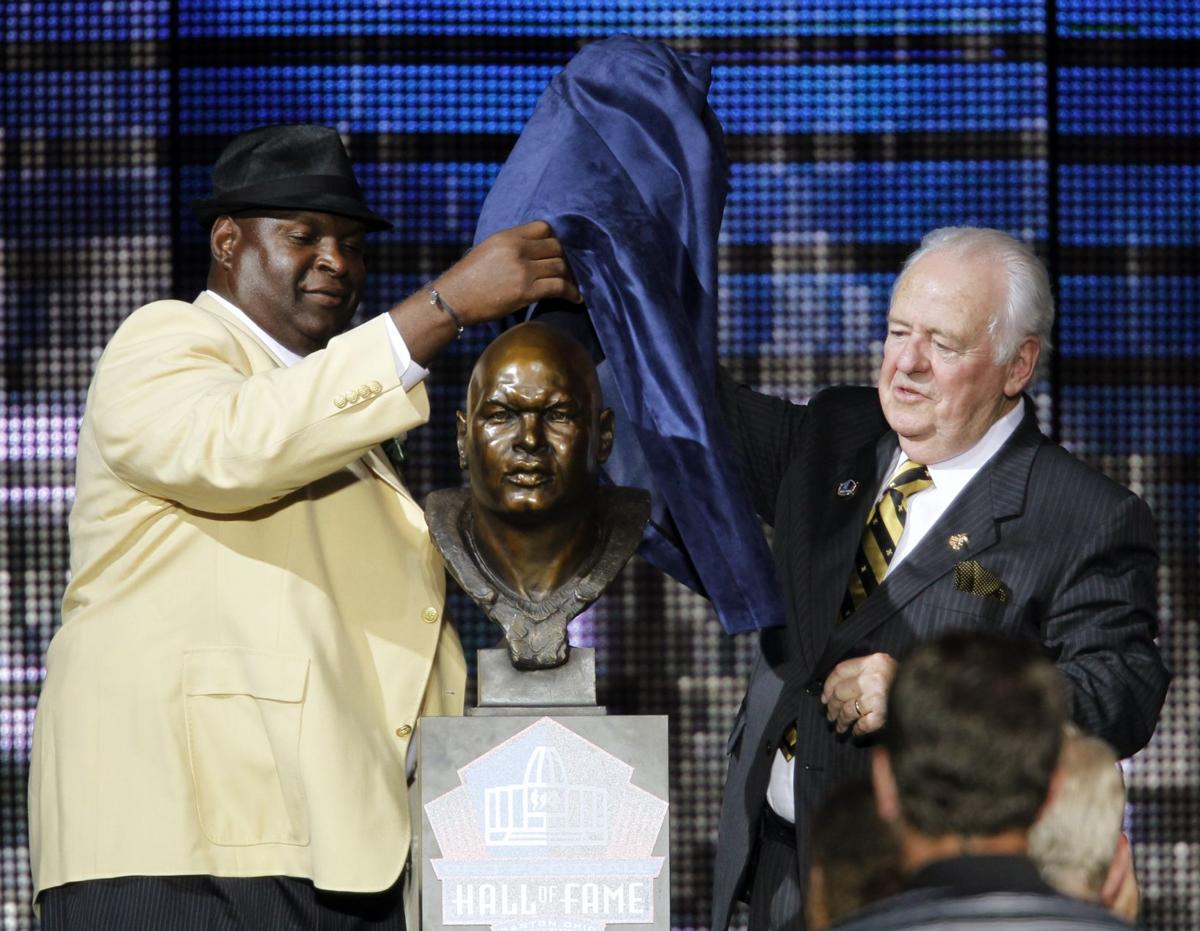 Saints quarterback Drew Brees looks at the busts of Hall-of-Famers as the Saints visit the Pro Football Hall of Fame in Canton, Ohio on Saturday, August 4, 2012. (Michael DeMocker, Nola.com / The Times-Picayune) ORG XMIT: 58585

The first question sculptor Blair Buswell asks new Pro Football Hall of Fame inductees whose busts he’s about to create is “How do you want to look?

"Like you want to bite someone’s head off, just happy to be on the field or somewhere in between?”

First, the 104 bronze busts Buswell has been responsible for since 1983, plus the ones done by his assistants, are said to be capable of surviving for 40,000 years. So there’s near-immortality involved.

Second, if you want a big smile, be forewarned you’ll wind up with dark brown teeth, not the best of looks for now or eons to come.

Still, that didn’t deter Michael Strahan, who wanted the famous gap between his teeth there for all to see. Buswell even had to measure the width for accuracy.

But that’s the way Buswell rolls, or sculpts.

“I want people to feel like they’re looking at these guys exactly the way they were as players or coaches,” said Buswell, who operates out of his studio in Pleasant Grove, Utah, near Salt Lake City. “And it’s obviously important to the guys, so we’re very precise about everything.”

Buswell’s particular dedication to this assignment also comes from the fact that unlike most artists, he isn’t a total football outsider.

During his period as a fine arts major at Brigham Young, Buswell also was a walk-on fullback for the Cougars, playing alongside Jim McMahon and future Hall of Famer Steve Young, whose bust Buswell would later fashion.

In fact, Buswell’s entrée into the Hall of Fame occurred in 1982 when San Francisco 49ers coach Bill Walsh spoke at the BYU Cougar Club banquet, where some of Buswell’s work was on display in connection with his receiving a scholar-athlete award.

Walsh, looking to commission a sculpture of himself and 49ers owner Eddie DeBartelo to commemorate their first Super Bowl victory, was impressed enough to hire Buswell.

The finished product was so well received that by the following year Buswell was doing his first Hall of Fame bust, one of Chargers coach Sid Gillman. A couple of years later, Buswell took over the work exclusively, doing, among others, those of Walsh and DeBartelo when they entered the hall.

Having such a strong football connection has helped Buswell with his subjects through the years, especially during the posing sessions, which are held either in his studio or at the home of the inductee and can take up to 10 hours.

“Well, when you’re spending several hours with somebody you probably don’t know, it’s nice to have something that makes easy conversation,” he said. “Talking about their careers certainly puts them at ease, but we also talk about their families and anything else that might come up.

“It’s pretty safe to say that without football I never would have gotten this work to do.”

Certainly the inductees appreciate having Buswell play a part in the process.

Destrehan High product Ed Reed, one of three 2019 inductees Buswell personally crafted for this year’s class (the others are Tony Gonzalez and Pat Bowlen), said at first he wasn’t sure about the process of bust-making.

But Reed wound up thoroughly enjoying it, especially the trip to Utah to spend a day posing; in turn, Buswell ranks Reed among his favorite players to sculpt.

“We had such a good time just talking,” said Reed, who was a five-time All-Pro safety with the Baltimore Ravens. “And his wife was such a good-spirited woman.

“You can tell how much work Brian puts into it. I don’t know how mine turned out, but from what I’ve seen so far (the busts aren’t unveiled until the induction ceremony), it’s all me.”

That includes sporting a slight smile, which fellow Louisiana native Johnny Robinson (whose bust was done by assistant Scott Meyer) also chose to do. Kevin Mawae, the third Bayou State player being inducted, opted to be more intense.

Robinson also had to be de-aged almost a half-century to 1971, his last year in pro football, all with the Kansas City Chiefs.

“That can be a challenge,” Buswell said. “But we get as many photographs from as many different angles as we can so we have the best possible impression of how they looked when they were playing.”

Styles obviously change over the course of a career, and players are given a choice of how they want it to be, as long as it approximates the time period of the rest of the bust.

Terry Bradshaw was among those happy to have his hair restored to the early 1970s, as was Mawae, whose mane was much thicker during his NFL days, which began in 1994.

Reed is being coy about whether he will be portrayed with the relatively close-cropped hair he sported for most of his career or the unkempt “Django” look he had at the end.

“I haven’t taken any pictures of it or anything,” he said. “Everybody’s going to have to find out at the same time.”

There are other rules about the busts — most notably that hats aren’t allowed (sorry, Tom Landry) as are other accessories such as goggles (Eric Dickerson), bandanas (Deion Sanders), or even earrings.

“I tell them, 'You can ask the hall, but I already know the answer,' ” Buswell said. “They just don’t want other things involved.

“But they can do whatever they want with the ones they get (made of plaster instead of bronze). I told Deion he could hang a different bandana on his every day.”

The posing sessions themselves also can sometimes prove trying.

Robinson, who has health issues as the result of a stroke several years ago, admitted he wasn’t the most patient of subjects for Meyer, but he was impressed with the attention to detail.

“They wanted to get my eyes, my nose and mouth just right,” the former LSU safety said. “I’m still not sure that it’s going to look exactly like me, but it’s pretty amazing what they do.”

At least Robinson’s impatience can be explained.

“Al was all excited about it the first time we met,” Buswell said. “But when I went to his office, he didn’t want to have anything do with me.

“He finally gave me about 20-30 minutes, and luckily I had brought along a camera so we could film it. Now we make sure the inductees are told how long it’s going to last.”

The inductees never met Buswell's predecessor, chief sculptor Jack Worthington, who did 144 busts after the opening of the hall in 1963. Worthington worked primarily off old pictures and used a player's hat size to gauge the size of the head.

But after 1986, when Buswell realized he had not made O.J. Simpson’s head large enough to match its actual dimensions, “Measurement Monday,” where the inductees are gauged for their busts, jackets and rings, was born. It was first held at the Pro Bowl in Hawaii and in recent years at the Super Bowl site the day after the game.

“Each of the inductees gets up, tells his life story,” Buswell said. “That lets us get to know something about them real quick.

After the measuring and photographing, the sculpting sessions are scheduled and Buswell and his staff proceed with casting the busts in bronze. This year’s collection was shipped to Canton in mid-July.

Along with the busts, Buswell created the statue of Saints owner Tom Benson that stands outside the Hall of Fame stadium that bears his name.

But he has other clients.

Buswell recently completed work on a decade-long project in downtown Omaha portraying pioneers, wagon trains, Native Americans, buffalo and other icons of the West along a four-block stretch.

But Buswell always will be proudest of his association with the Hall of Fame.

“To me, it’s an honor to feel like I’m part of the history of the game, even though I can walk through the hall and nobody knows who I am,” he said. “So it’s important that the quality is there.

Former LSU two-way football player Johnny Robinson, who was inducted into the Pro Football Hall of Fame in August, will represent the Tigers a…