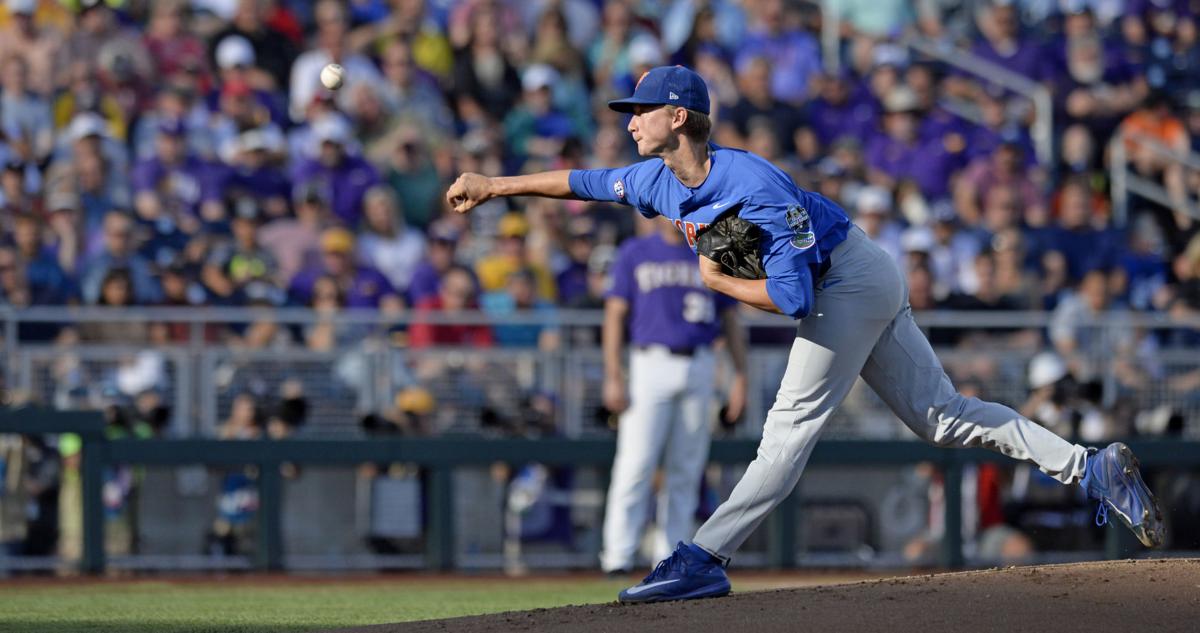 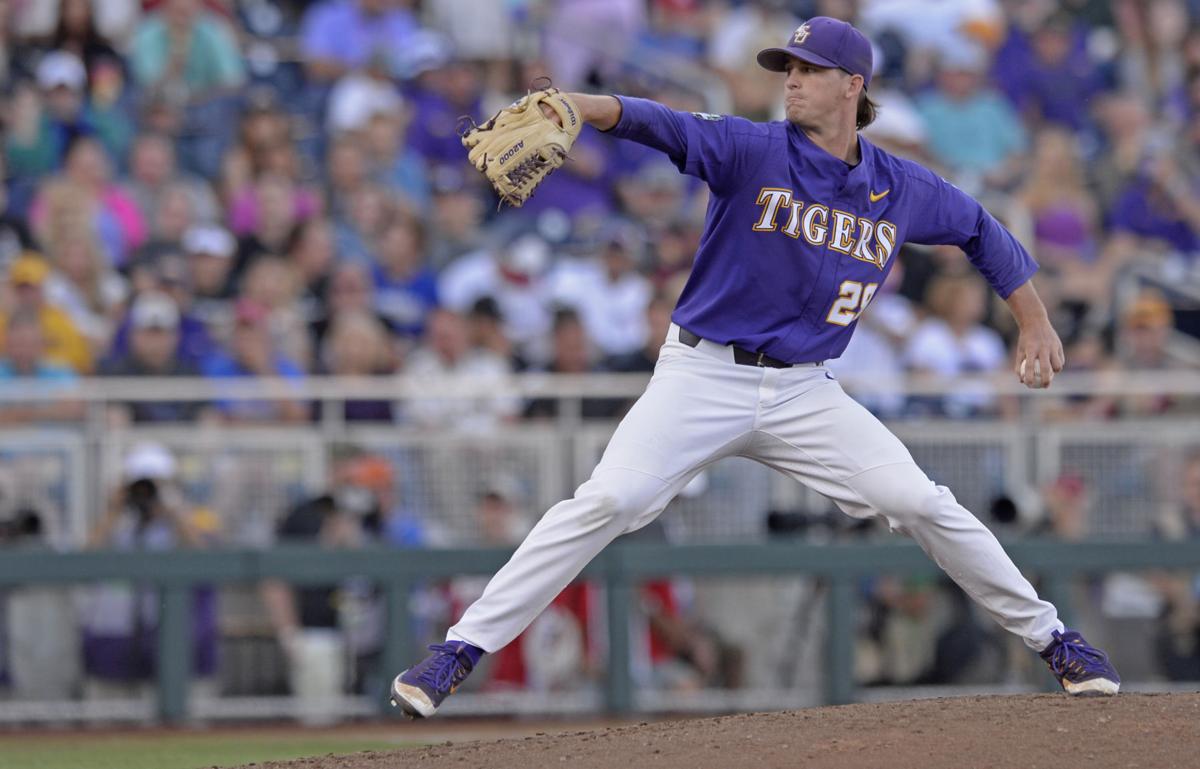 LSU pitcher Nick Bush (29) pitches in the fourth inning during Game 1 of the College World Series finals between LSU and Florida, Monday, June 26, 2017, at TD Ameritrade Park in Omaha, Neb. 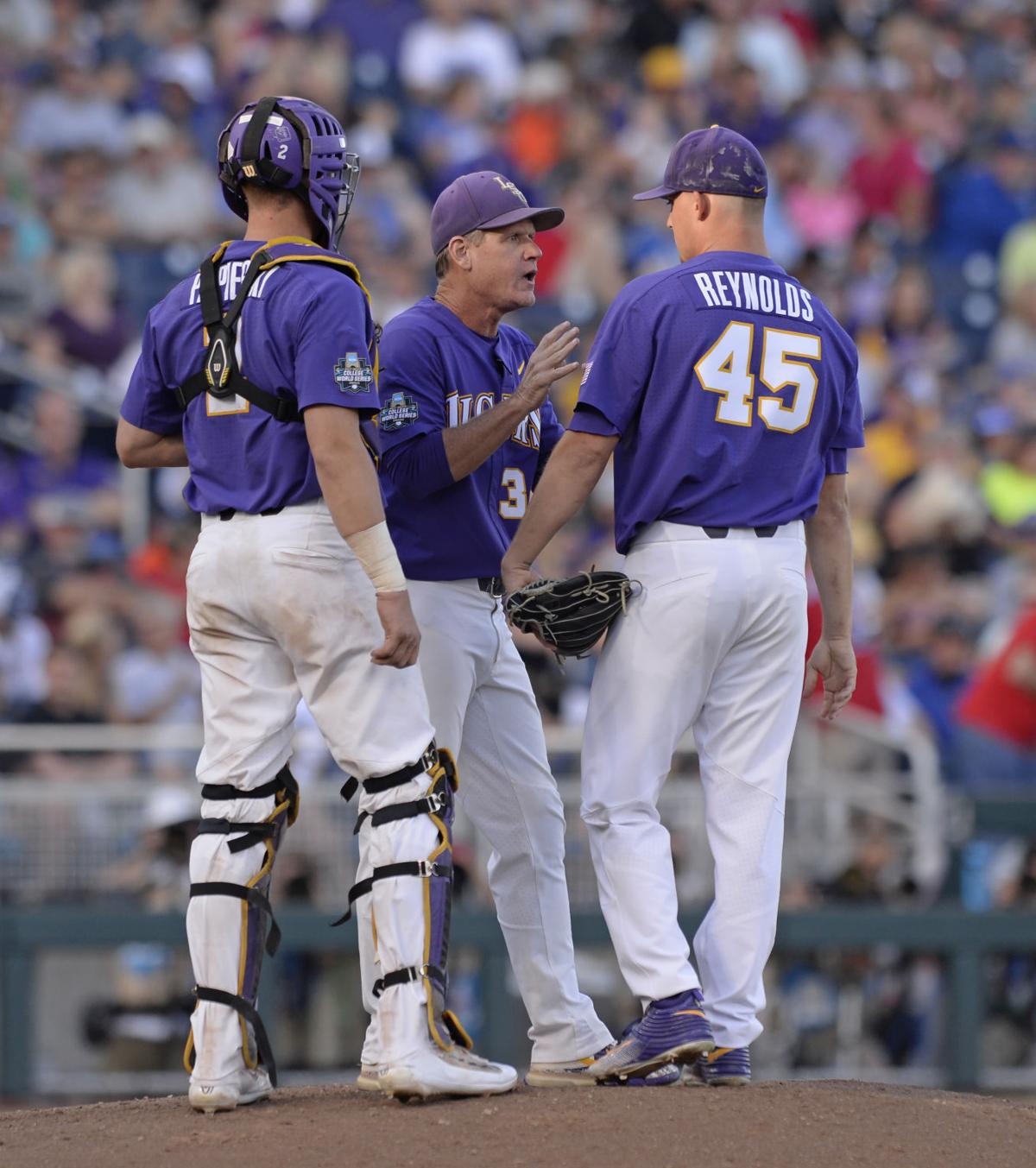 LSU pitcher Nick Bush (29) pitches in the fourth inning during Game 1 of the College World Series finals between LSU and Florida, Monday, June 26, 2017, at TD Ameritrade Park in Omaha, Neb.

OMAHA, Neb. — Running out of options while on this quest for a national championship, LSU had to scratch together a pitching plan for the first game of the College World Series finals.

Florida threw the kid who might be the No. 1 pick in next year’s MLB draft.

Given the circumstances, LSU fought valiantly, but that doesn’t make the result any easier for its fans — thousands of whom showed up at TD Ameritrade Park for this best-of-three series. The Tigers lost 4-3, putting them once again with their backs against the wall, needing two straight wins to claim the seventh title in program history.

Florida right-hander Brady Singer struck out 12 Tigers in a masterful performance, then handed the ball to the NCAA leader in saves, closer Michael Byrne, with six outs to go.

Byrne allowed an RBI single to the second batter he faced, then retired the final four batters in order to record his 19th save of the year.

"Great game," LSU coach Paul Mainieri said. "My feelings are we went up against who i believe may be the best pitcher (Singer) I've seen in the SEC for an opponent since I've been the coach at LSU. He reminds me so much of Aaron Nola, it's scary."

The teams play again at 7 p.m. Tuesday. The Gators need one win for their first national title. The Tigers must win Tuesday to force a decisive Game 3 on Wednesday.

The first time these Southeastern Conference rivals met in Gainesville, Florida, Singer carved up LSU, shutting the Tigers down in a complete-game effort March 25.

This time, he effectively mixed a three-pitch arsenal that flummoxed LSU’s hitters for most of the game.

"You've got to tip your hat to him," said LSU right fielder Greg Deichmann, who scored the Tigers last run in the eighth after a lead off double that finally chased Singer. "He had a great outing. Like coach said, he's probably going to be the first pick in the draft next year. But that's the pitcher we knew we were getting."

Russell Reynolds came into Monday's game with the highest ERA (8.59) and fewest innings (14.2) of any pitcher to start a championship series game since 2003.

As unsavory as those numbers may have been, Reynolds was fantastic through three innings. He faced the minimum, as the first two hits he allowed were erased at second base by catcher Michael Papierski’s strong right arm, thwarting two steal attempts.

For the final time, LSU turns to senior Jared Poché: 'You can't go out any better way'

OMAHA, Neb. — Every time Jared Poché took the mound for the past month, he had to wonder if …

But Reynolds lost control in the fourth, and the old baseball adage bit the Tigers: Walks will come back to haunt you.

After a quick first out, Reynolds walked Dalton Guthrie on four pitches, then walked JJ Schwarz on five pitches. Nelson Maldonado finished off Reynolds by working an eight-pitch walk, forcing LSU to go to the bullpen for left-hander Nick Bush.

All three of those base runners made it home.

Kramer Robertson raced to chase down Austin Langworthy’s foul ball down the third-base line, but he caught it with momentum taking him toward the left-field stands. He had no chance to throw out Guthrie at the plate, and the other two runners advanced on Robertson's throw home.

"Russell did a really great job there the first three innings," Mainieri said. "And man, obviously hindsight is 20/20. I got a little greedy there and tried to get an extra inning out of him, and we still had a long way to go and not a lot of options coming out of the bullpen.

"I'll take the blame for that. I tried to stick with him for too long and it backfired."

With the way Singer was throwing, the Gators had to feel pretty comfortable with that 3-0 lead. Through five innings, LSU had struck out nine times and mustered just three hits against the sophomore right-hander.

But Antoine Duplantis breathed some life into the LSU offense in the sixth. He launched a homer over the right-field fence and the Gators' bullpen, prompting the relievers to start warming up.

It was only Duplantis' second home run of the season and fourth of his career.

"I hit a fastball out," Duplantis said. "I was seeing him pretty well today. I was just trying to lay off the breaking ball as much as I could and I did a good job of that. Luckily, I got ahead in the count that at-bat and I didn't miss my pitch."

Then a couple LSU freshmen started a two-out rally without using their bats. Zach Watson, who looked completely overmatched striking out in his first two at bats, was hit by a pitch. Josh Smith drew a walk, putting two on for Beau Jordan.

Singer left a 1-1 fastball in the middle of the plate, and Jordan did not miss, banging it through the left side of the infield to cut the Gators’ lead to one run.

But LSU never closed the gap.

Now the Tigers face a one-game gap they'll have to overcome Tuesday to try to force a Game 3 Wednesday.

"The great thing about baseball is you get to come out and play tomorrow," Deichmann said. "We're not hanging our heads about anything. We had a lot of great stuff that we did tonight. We had a couple of tough breaks that didn't go our way, but that's the way baseball is."

Rabalais: LSU's situation serious but not hopeless ahead of CWS Game 2 vs. Florida

OMAHA, Neb. — Don’t know if the outlaw Jesse James ever did much work in these parts, but he would have appreciated what a band of desperadoes…

OMAHA, Neb. — Dr. Jerry Poché and Jimmy Roy, whose sons are part of the LSU baseball program, revived an elderly Florida fan in the sixth inni…

On Tuesday, Dr. Jerry Poché talked to the media about how he and Jimmy Roy revived an elderly Florida fan in the sixth inning of Monday’s game…