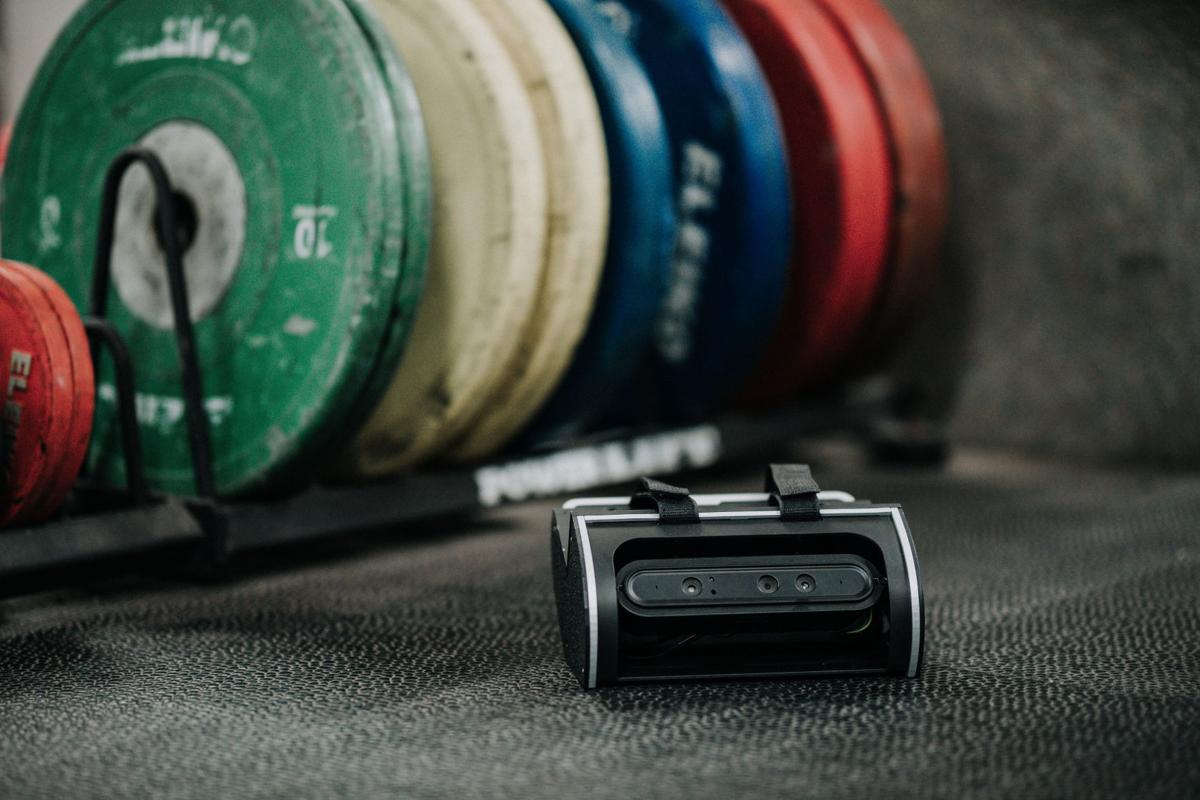 The LSU strength and conditioning program is in a trial run with a developing technology, Perch (pictured), which measures and records movement during a workout and produces instant data that makes velocity-based training more efficient. 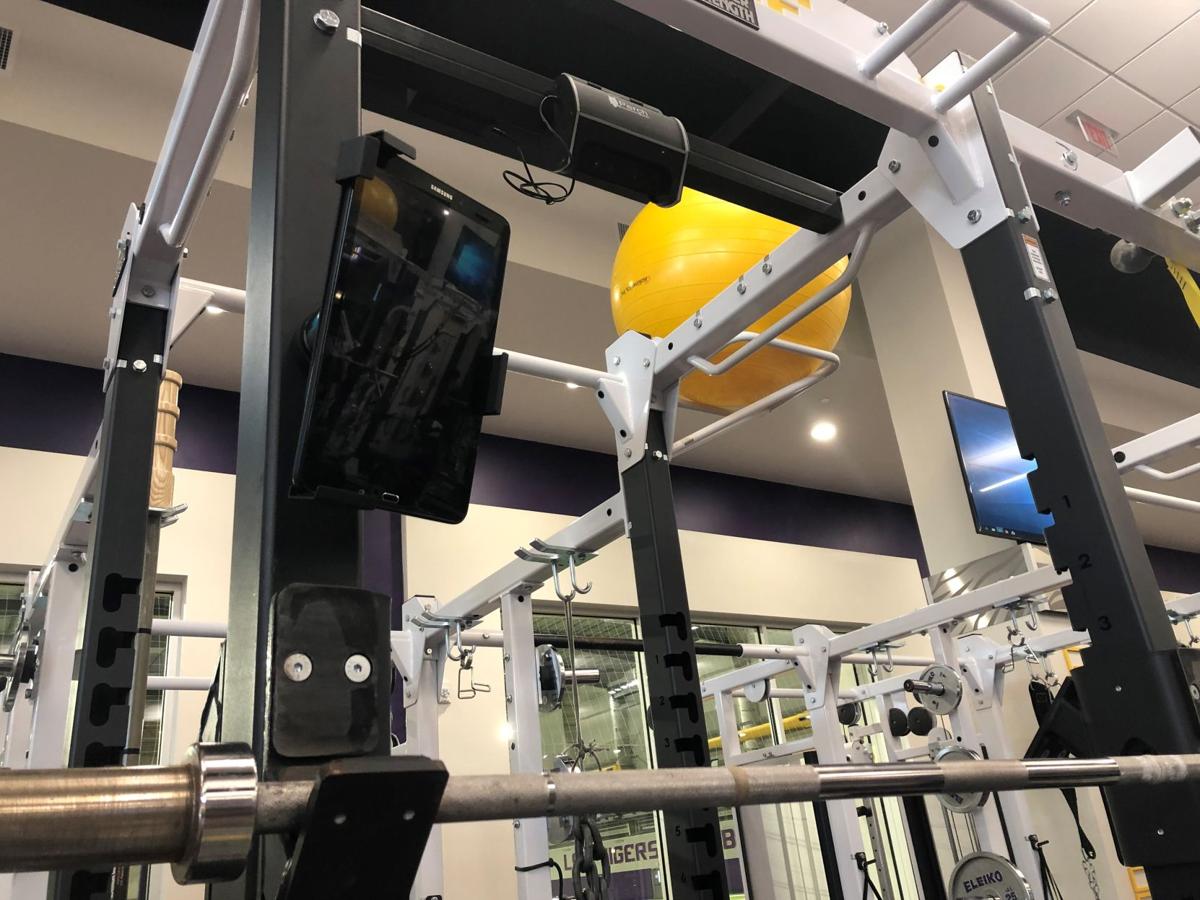 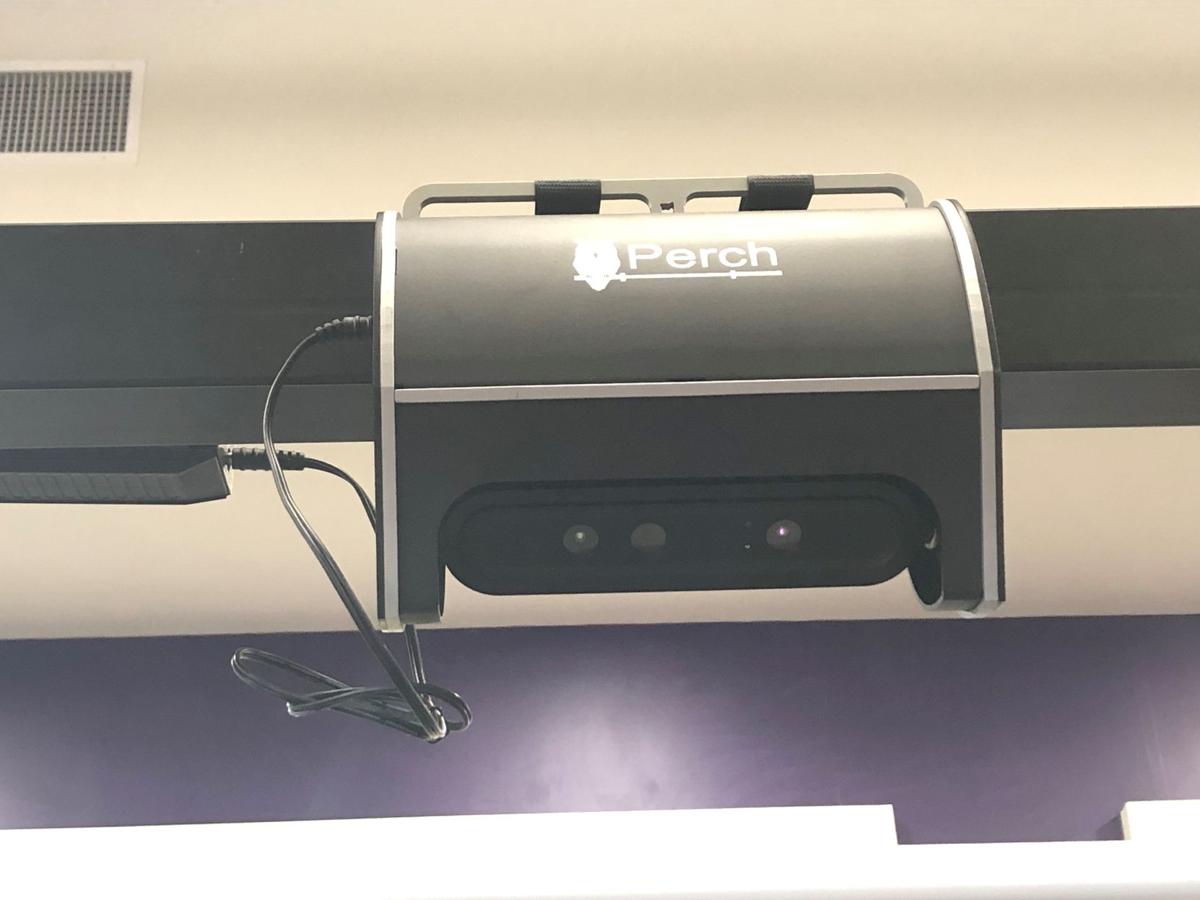 A close-up view of the Perch device. The camera adjusts automatically based on the workouts selected on the tablet. It points directly at the front during squat workouts, and it rotates on a motor toward the weight bench when bench press workouts are selected. 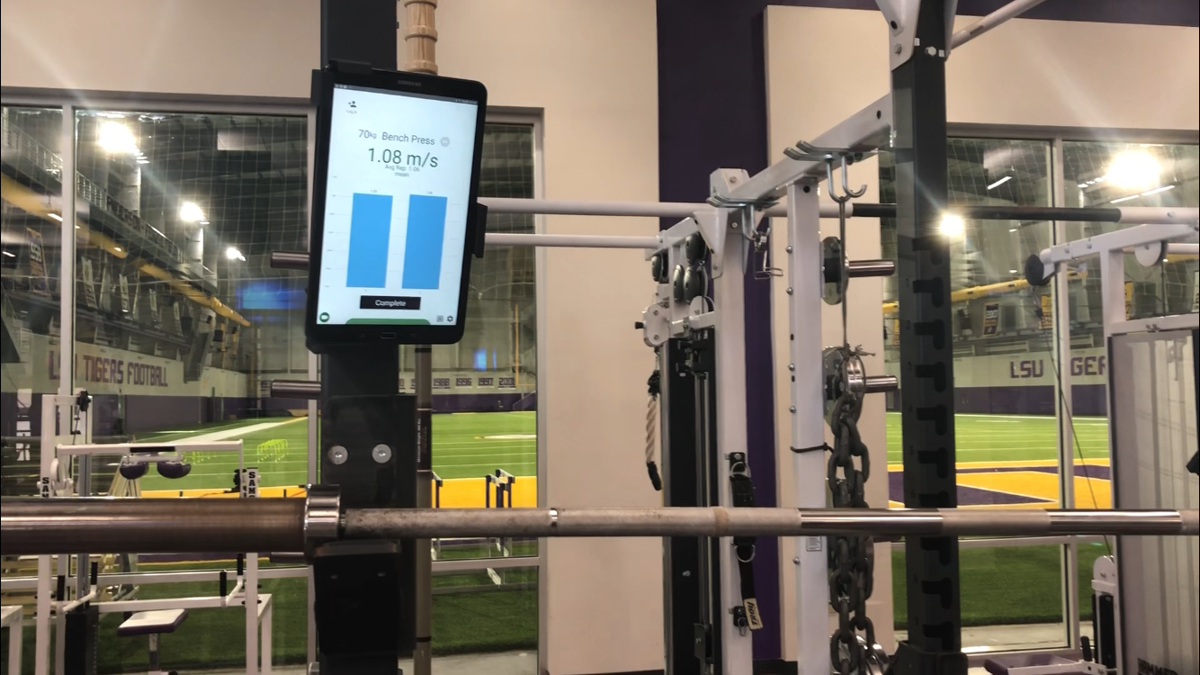 The Perch device records and measures every workout repetition in meters per second, a unit that helps determine how much power an athlete is producing. 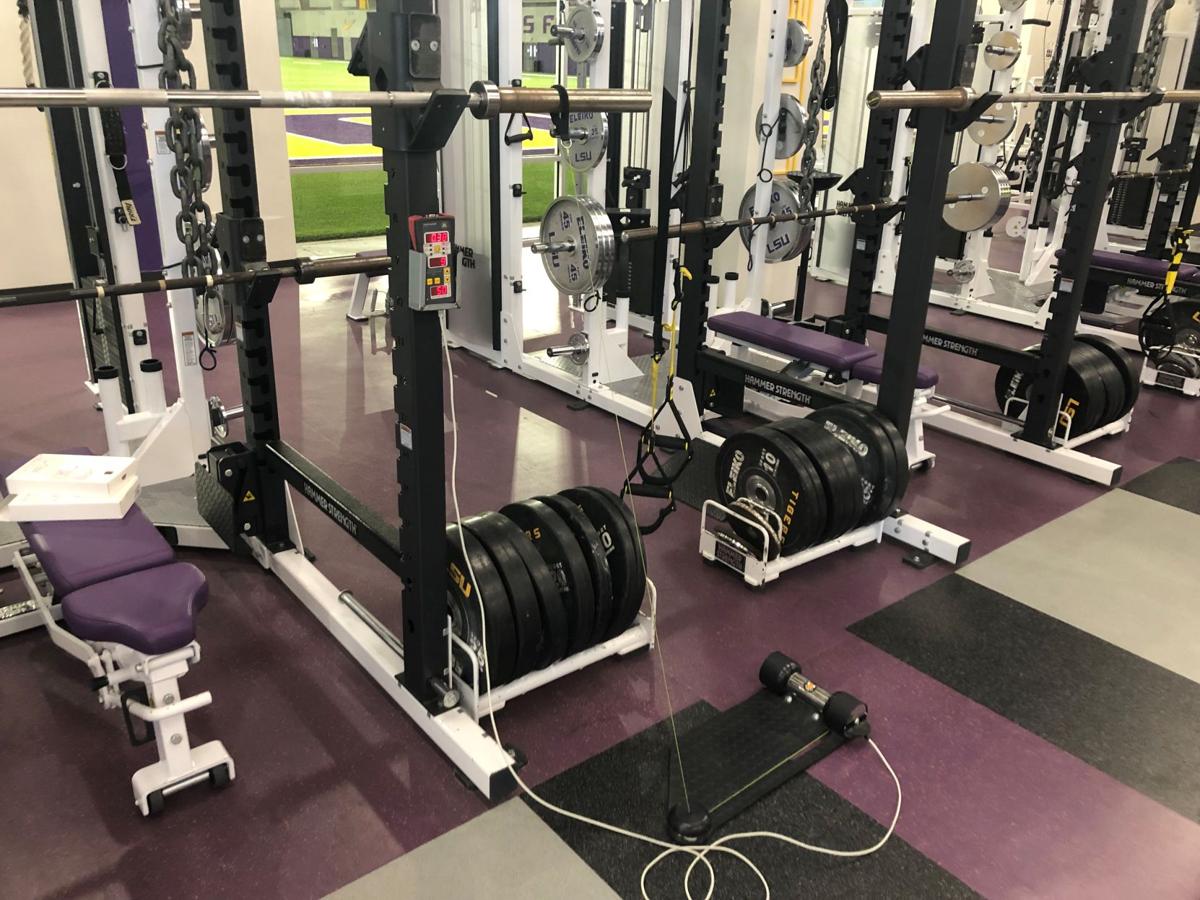 The LSU strength and conditioning program currently uses a device called a "Tendo" for its velocity-based training. A longtime standard in the weightlifting community, the Tendo does have some analog features that can be restrictive when compared to hands-free units like the Perch. 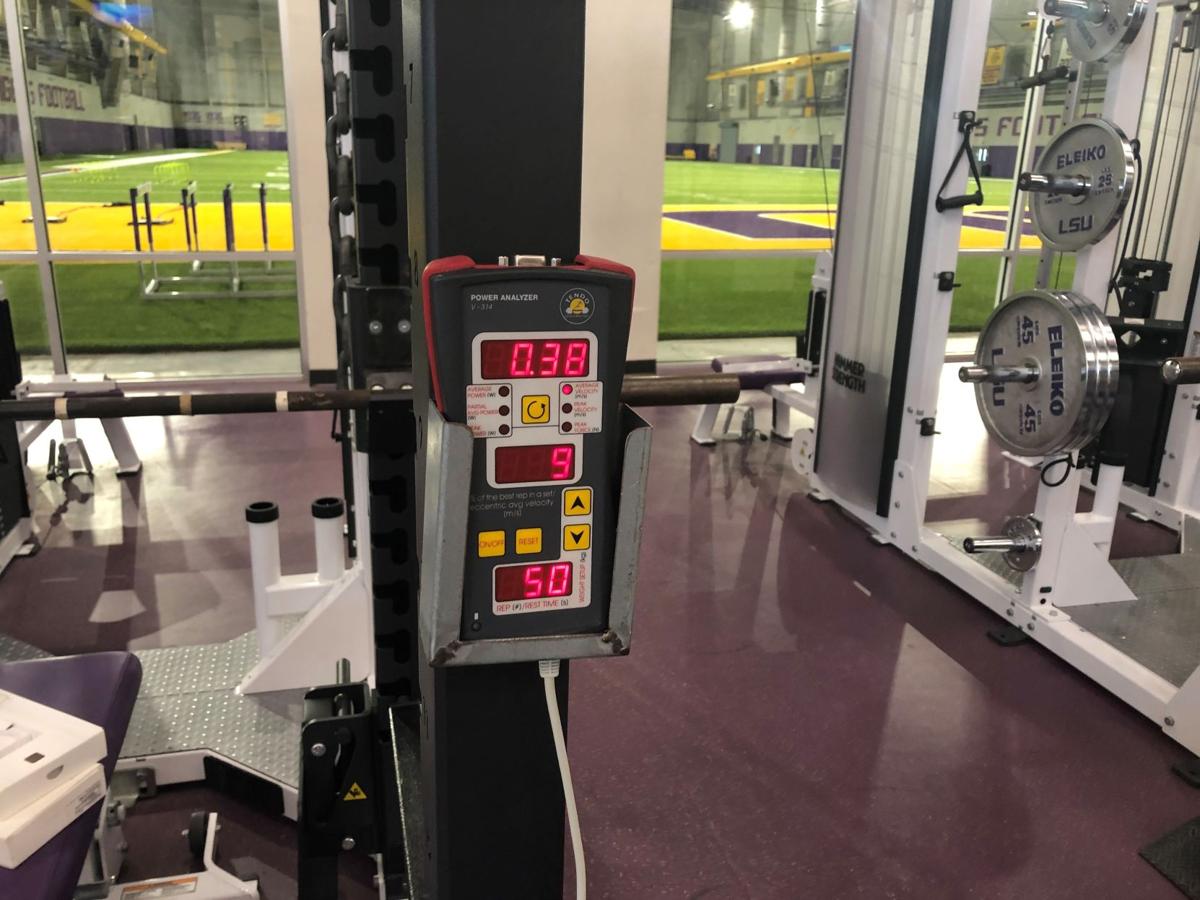 The monitor for the Tendo device records movement in meters per second. Without an uploading mechanism, LSU coaches must write down the data in real time and enter the numbers for each player into the computers themselves after workouts. 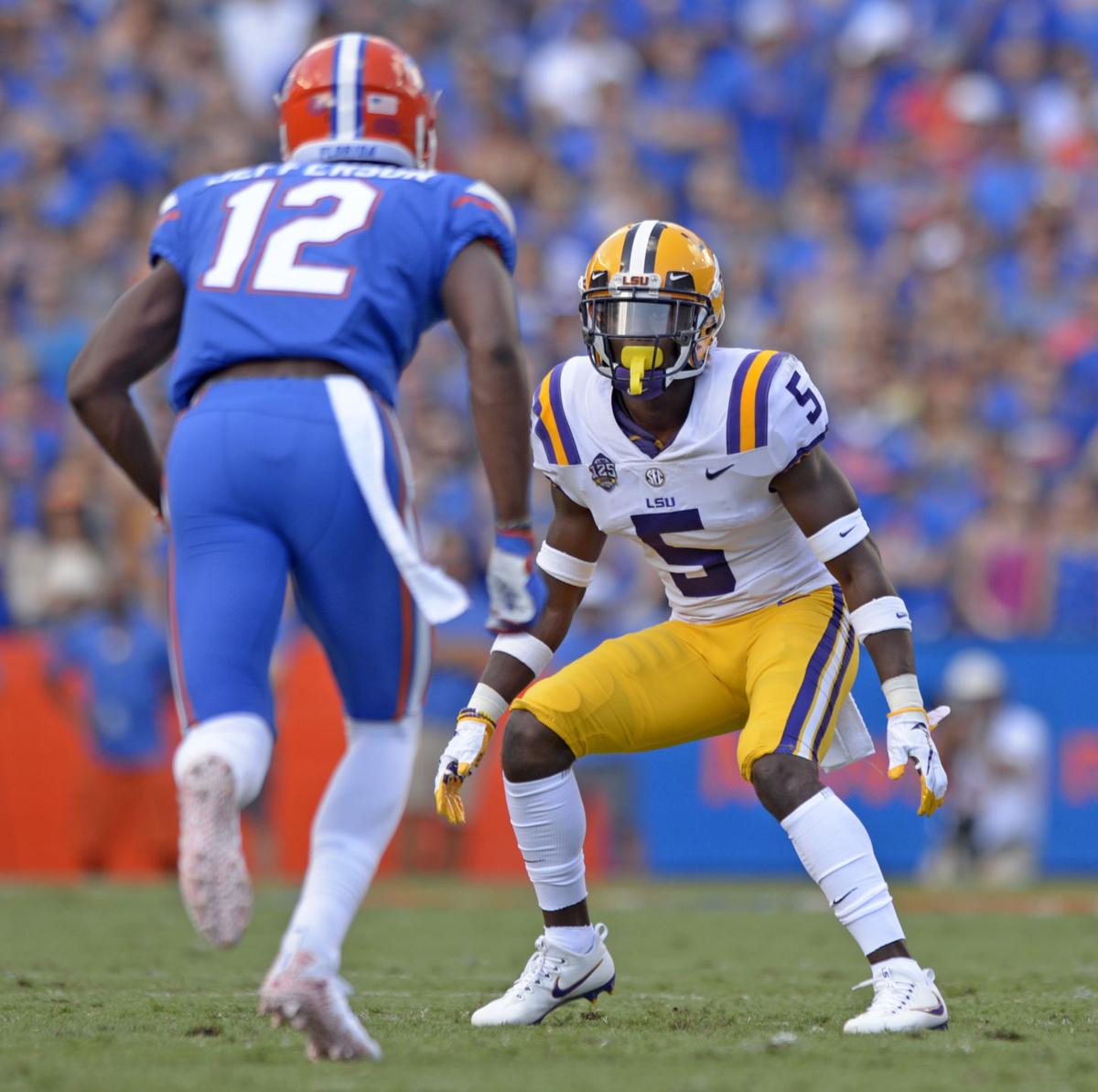 The LSU strength and conditioning program is in a trial run with a developing technology, Perch (pictured), which measures and records movement during a workout and produces instant data that makes velocity-based training more efficient.

The monitor for the Tendo device records movement in meters per second. Without an uploading mechanism, LSU coaches must write down the data in real time and enter the numbers for each player into the computers themselves after workouts.

With each rep, on a tablet screen attached to the rack, columns leaped on a digital graph.

A tall column. A shorter one. One taller than the first.

There were dozens of weight plates shelved around the weight room in the LSU athletic facility. But they weren't the focus here.

The camera was fixed on the movement of the bench barbell, which LSU strength coach Tommy Moffitt jerked upward at a steady rate.

Moffitt set the barbell back on the rack, sat up, and pointed at the columns on the tablet screen.

"Power is how fast you do something," Moffitt explained. "It's the amount of work you do per unit of time."

A science lesson in a sports section?

For a running back, power can be the difference between being tackled or running someone over.

It can be the difference between winning and losing.

And in order to develop an athlete's power — a workout regimen called "velocity-based training" in strength and conditioning circles — you can't just slap a couple of weight plates on either side of a barbell and have the athlete start lifting.

You have to know how fast the athlete is lifting.

Velocity-based training, Moffitt said, was studied by sports researchers as early as the 1960s in the Soviet Union.

Back then, power was measured in workouts by using strings and surveys. In the decades that followed, modernized equipment helped bring velocity-based training into the mainstream, but even that technology seems archaic in comparison to what is hanging on the LSU weight rack.

Hardly a foot long and a few inches wide, the camera is connected to a cable box-sized plastic container that has a white logo of an owl on it.

The LSU weight room only has one of these devices, called a "Perch," while the strength program works through a trial phase with the device's creators. But the goal is to have 22 fully operational devices by July.

Moffitt compares the device to an Xbox Kinect sensor, which advanced immersive gaming by recognizing a person's body movement and allowing it to control the game play.

The Perch essentially does the same thing, only it locates the barbell and tracks the bar's movement in meters per second — or, to continue the science lesson, the velocity, which is paired with the amount of weight on the bar to calculate how much power someone is generating.

And when compared to the technology the LSU strength program was previously using, the Perch device will allow LSU to have one of the most efficient and effective velocity-based training programs in college athletics.

There's a culture of staying on the cutting edge within the LSU athletic department.

Its sports medicine staff is publishing a study that shows its innovative approach to ACL surgeries, which cuts down recovery times in half with safer results. Last summer, the department installed a 40-foot-long air-conditioned shipping container called the "Boudreaux Box" after its creator, Louisiana businessman Paul Boudreaux, that helps cool down athletes in the heat of summer.

In the constant and highly competitive arms race in college athletics, Moffitt said he is always looking for what he calls "emerging technologies."

"If it will speed up what we do, make our workday more efficient and allow us to put a better product on the field, then we'll say, 'Let's look into this,’ ” Moffitt said.

Imagine two athletes standing side by side.

In a second, both athletes will jump to reach a line 30 inches off the ground.

When the athletes jump, one reaches the line first. If you were picking players for a sports team based on this test, it's easy to understand which one you'd choose.

"You always want to go with the guy who can jump faster," Moffitt said. "That's sports. It means that person has more power. Your best athletes are the ones that can jump high and fast."

On the LSU football team, Moffitt said, the most explosive player is nickel safety Kary Vincent, who doubles as a sprinter on the Tigers' track and field team.

The path to improving such a powerful player begins with a test like we just imagined.

Back in August, Moffitt had every LSU football player jump on what's called a "force platform," a flat square filled with sensors. It calculates power by recording the amount of force the player used to press down on the platform and the time it took for the player's feet to leave the ground.

All the data on a player's jump is plotted on a graph that compares a player's force versus the time, thus called a "force-time curve."

Bulky linemen tend to have wider, shorter arcs on the graph, indicating they're doling out more power, but in a longer amount of time.

Spry skill players tend to have thinner, taller arcs, for the opposite reasons.

But a player can increase his power on both sides of the equation, and by looking at the graph, Moffitt can build velocity-based training specific to each player's needs.

"It takes the guesswork out of training," Moffitt said.

Traditionally, most people are familiar with building what's called "absolute strength" — someone who can bench-press 185 pounds increases to 205 pounds to 225 pounds over time.

LSU trains for absolute strength weekly, Moffitt said, but in their power-based workouts, players are trying to lift an amount of weight in a certain amount of time.

And since velocity-based training began, strength professionals have been developing new technologies to measure that kind of power in the most accurate and efficient way.

The Perch device is still in the development stage. It was created by three recent graduates of the Massachusetts Institute of Technology who all played sports for the private university in Cambridge, Massachusetts, known as one of the world's most prestigious research institutions.

One of Perch's founders, Jacob Rothman, a 2016 MIT graduate, said Moffitt has a reputation of being very proactive in the strength and conditioning community, so they sent him an email about the product.

Moffitt called back, and after a few conversations, Rothman flew to Baton Rouge in early March to tour the LSU facility and meet the Tigers staff.

There, Rothman was able to see what technology LSU had previously been using to record data for its velocity-based training: a device called a TENDO Unit, an established piece of equipment among weight training programs that Moffitt said has "worked fine for years and years and years."

If the Perch device is considered hands-free, the TENDO can be considered analog. Out from the TENDO device — which is in the shape of a tube — runs a pull string, which has a looped end that is slipped around the edge of a barbell. When the barbell is lifted, the string is pulled, and the device records the movement and displays the immediate data on a handheld device in meters per second.

Although the TENDO produces the same numbers as the Perch, Moffitt said, there are some issues.

The string sometimes gets in the way: You have to take it off, replace the weights, slip the string back on, then clear the device's system.

"There's a lot of moving parts to this device," Moffitt said. "It's just a cumbersome system."

Moffitt also had to write down all the data while players were lifting, since the device does not store data on its own.

"When you're looking down and writing, then you're not coaching," Moffitt said.

Plus, in order to turn that data into a useful report, someone has to enter all that data manually into a computer.

Former LSU fullback-turned-strength coach Connor Neighbors drew the short straw on that task, Moffitt said, because Neighbors was the youngest coach on staff.

The Perch device automates that task, uploading all the data to an online storage cloud. If Moffitt needs to pull a player off to the side to coach them about a lift, the camera is still recording, and Moffitt can instantly rewind the workout video on the device's tablet to catch up after he's done speaking with the player.

Players can even create profiles by logging into the Perch's system on the tablet.

The Perch device inside the LSU weight room already has a profile for every Tigers player, from running back Chris Curry to Moffitt's son, tight end Aaron Moffitt.

Ever since the first device was installed, Moffitt and the Perch creators have been providing feedback to one another. Once the LSU strength staff started to create the player profiles, they asked if it'd be possible to create a leaderboard interface, where players could compete with each other's times in real time.

That feature has been installed.

"That was big for them," said Rothman, 25, who said the Perch device doesn't yet have a set market price because the company is so young. "They really wanted that (leaderboard), so that's something we worked on with them."

There are 40 exercises programmed into the device — from bench press to squat to split jerk — and when each workout is selected, the camera re-positions to locate the barbell.

Moffitt is confident the weight room will be fully operating with its 22 Perch devices by July, and he's eagerly anticipating possible future installments, like automated workout routines being embedded into the Perch's program or even players being able to log in just by facial recognition.

"That's why LSU is one of our first flagship customers," Rothman said. "They've been so open to us. They provide a lot of feedback. They know how to turn this product into something that will benefit the athletes."

LSU's Ed Orgeron stops in recruiting hotbed of Houston; 'We treat it like an in-state area'

HOUSTON — Moving from the spicy odor of boiled Louisiana crawfish to the smooth barbecue smoke of southeast Texas, Ed Orgeron spent Monday in …

HOUSTON, Texas — Tommie Robinson mingled among the Texans. A handshake here. A group photo there.

HOUMA — Ed Orgeron said he wants officials to be "fair" and "consistent" when it comes to implementing the NCAA's new targeting and overtime rules.