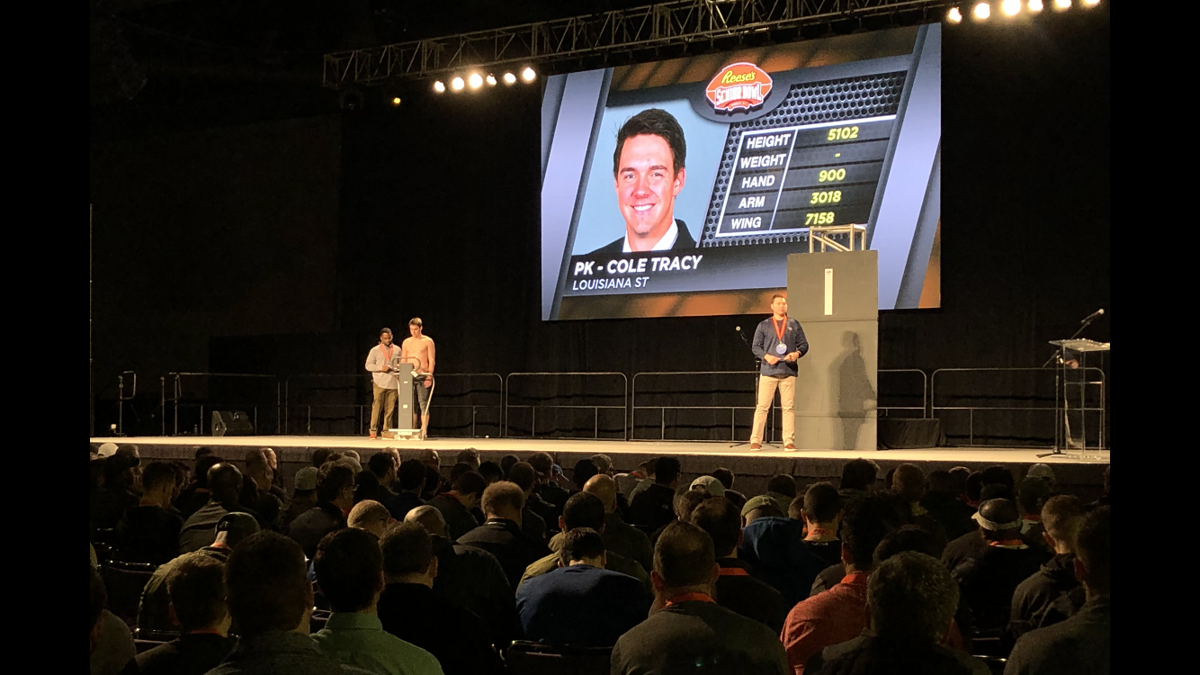 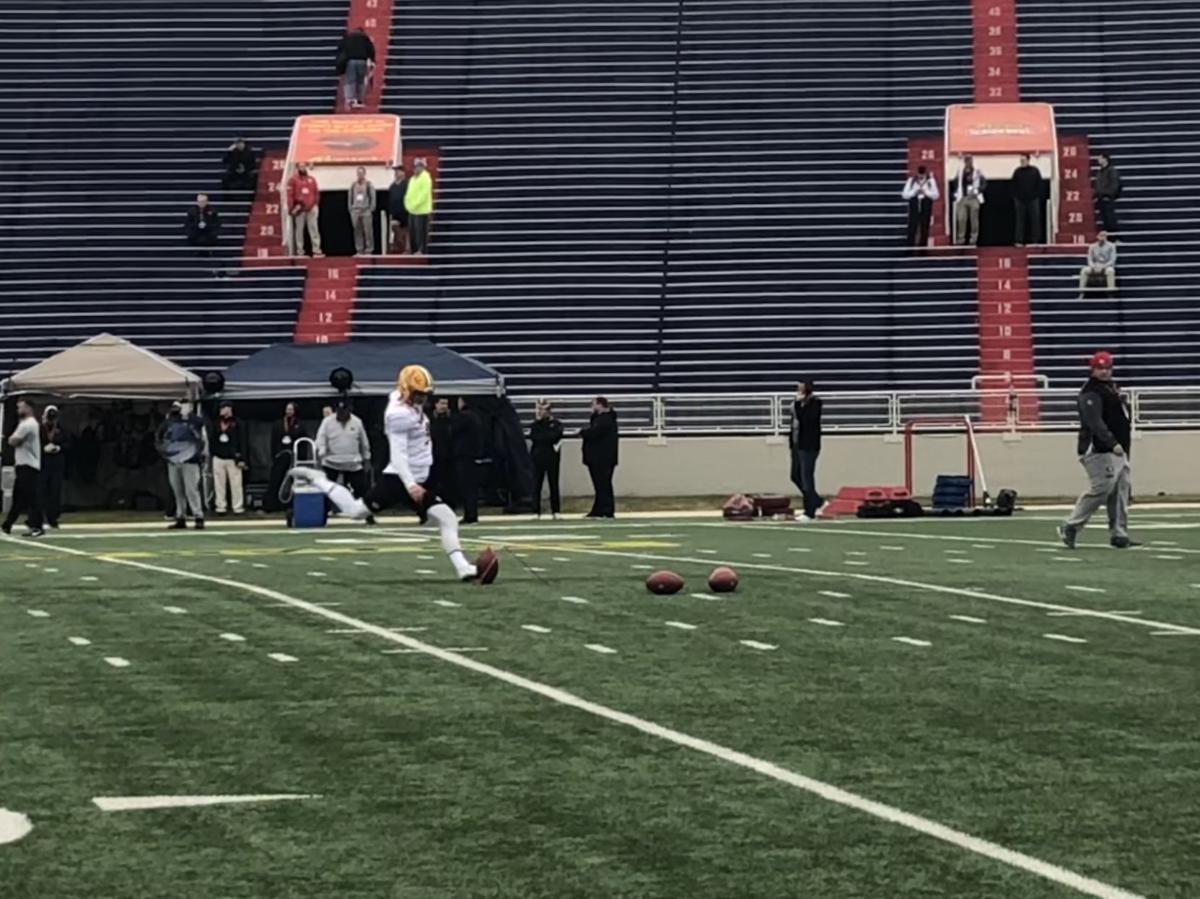 MOBILE, Ala. — Cole Tracy said he'd been given fair warning.

LSU special teams coach Greg McMahon told the former Tigers kicker that the Senior Bowl weigh-in would be a tad vulnerable, standing shirtless on-stage in front of hundreds of pro scouts who wanted to see how Tracy measured up.

"Walking up in the front of the stage in your spandex is a little different," said Tracy, who measured 5-foot-10¼ and weighed 183 pounds Tuesday morning at the Mobile Convention Center. "To be honest, it's kind of like kicking. In the moment, I just kind of walked up, did my thing."

Tracy has measured up pretty well so far.

The California native tacked his name to seven school records in one season at LSU, and after making four field goals in the Tigers' Fiesta Bowl victory over Central Florida, Tracy became the NCAA's all-time leader with 97 career field goals across any division.

Most of the football-watching nation is aware of Tracy's journey, which began at Division II Assumption College in Worcester, Massachusetts.

So are the NFL personnel who met with Tracy during the all-important individual meetings and interviews at the Senior Bowl hotel, the Renaissance Riverview Plaza.

Those in-person evaluations began Sunday night and continue throughout the week leading up to the bowl game Saturday, in which Tracy and former LSU tight end Foster Moreau will both play.

LSU spring football is less than two months away.

Tracy said he had spoken with 16 to 18 NFL teams as of Tuesday morning.

Some teams asked Tracy about his path from graduate transfer to record-holder. Some didn't at all.

"Most of the questions are very similar," said Tracy, who was among three finalists for the 2018 Lou Groza Award, given to the nation's top kicker. “ ‘What's your preparation like? What are you doing on a Monday versus a Wednesday? What do you do pre-kick?’ ”

The questions are a pretty deep dive for teams, which are trying to get as much information they can to decide if they're going to spend a pick on a kicker in April's NFL draft.

An NFL team has never drafted an LSU kicker.

Seventeen kickers have been drafted since 2009, and Tracy's statistics match well with each of them. His 87.9 field goal percentage is tied for fifth in the grouping with former Texas A&M kicker Randy Bullock — who was drafted in the fifth round by the Houston Texans in 2012 — and his 54-yard career-long is tied for 10th.

Tracy is the third-ranked kicker on ESPN analyst Mel Kiper's NFL draft "Big Board," and the Senior Bowl week can add extra evaluation to solidify Tracy's position on draft day.

Of the 17 kickers who have been drafted since 2009, six participated in the Senior Bowl.

Tracy, who is on the South team, is one of two kickers in this year's Senior Bowl. Oklahoma's Austin Seibert, on the North team, is the other.

"This is the most exposure out of any college bowl games," said Seibert, who made 17 of 19 (89.5 percent) of his field goals in 2018. "There is a lot of pressure here. There is a lot at stake. You just have to go out there and do what we've always done."

What if there's not that many field goal opportunities during Saturday's game?

Well, most of the evaluation actually happens during the three days of afternoon practices, which began Tuesday at Ladd-Peebles Stadium.

Tracy knew the weather forecast for Day 1 of practices was dismal.

When the South team specialists warmed up before practice, dark clouds blustered overhead in the 56-degree, 14-mph eastbound wind.

The orange flags fluttered atop the goal posts while Tracy went through his practice routine: a few stretches before kicking off a tee.

Tracy made his first three attempts from 33 yards, and on the third, he smacked the extended pole of an operations truck that was shooting game film behind the goal posts.

Hundreds of scouts, coaches, executives and patrons began to filter in.

The special teams period came at the end of the 90-minute practice, and by then, rain began to drizzle and the wind began to blow into the line of scrimmage.

Tracy missed a 42-yarder from the left hash mark. Then another from the right.

Then, Stanford punter Jake Bailey, Tracy's holder and roommate this week, backed up to spot a 45-yarder in the middle of the field.

Tracy made that field goal, then another from 48 yards on the right hash.

His furthest attempt, from 51 yards, sailed in the wind and fell short.

"Definitely was not my best day," Tracy said afterward.

The performance, even in poor weather conditions, didn't follow Tracy's reputation, which was boosted by his 42-yard, walk-off field goal to beat Auburn 22-21 on Sept. 15 — the kind of thrilling kick that Seibert said prompted him to reach out to Tracy via Instagram for congratulations.

Tracy said Hightower told him: "It's about how you bounce back and how you respond."

"Need to bounce back tomorrow," Tracy said. "Have a better week. Kind of just feeling it out is the first step of this entire process."

Louisiana players in the Senior Bowl: