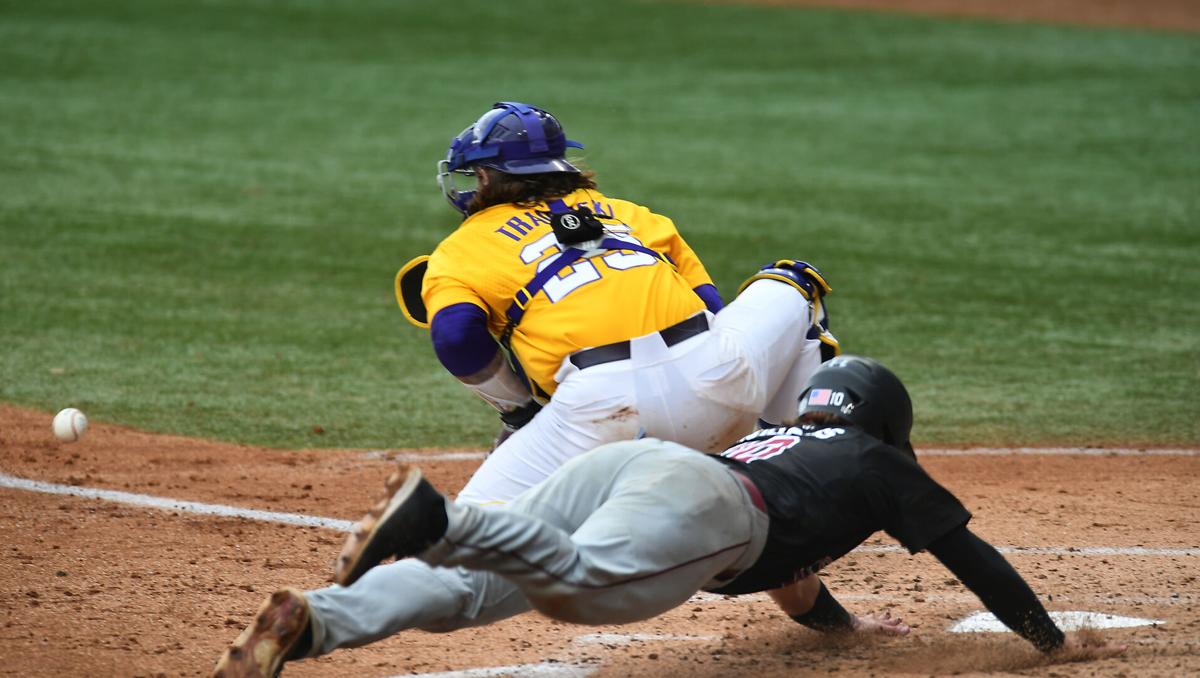 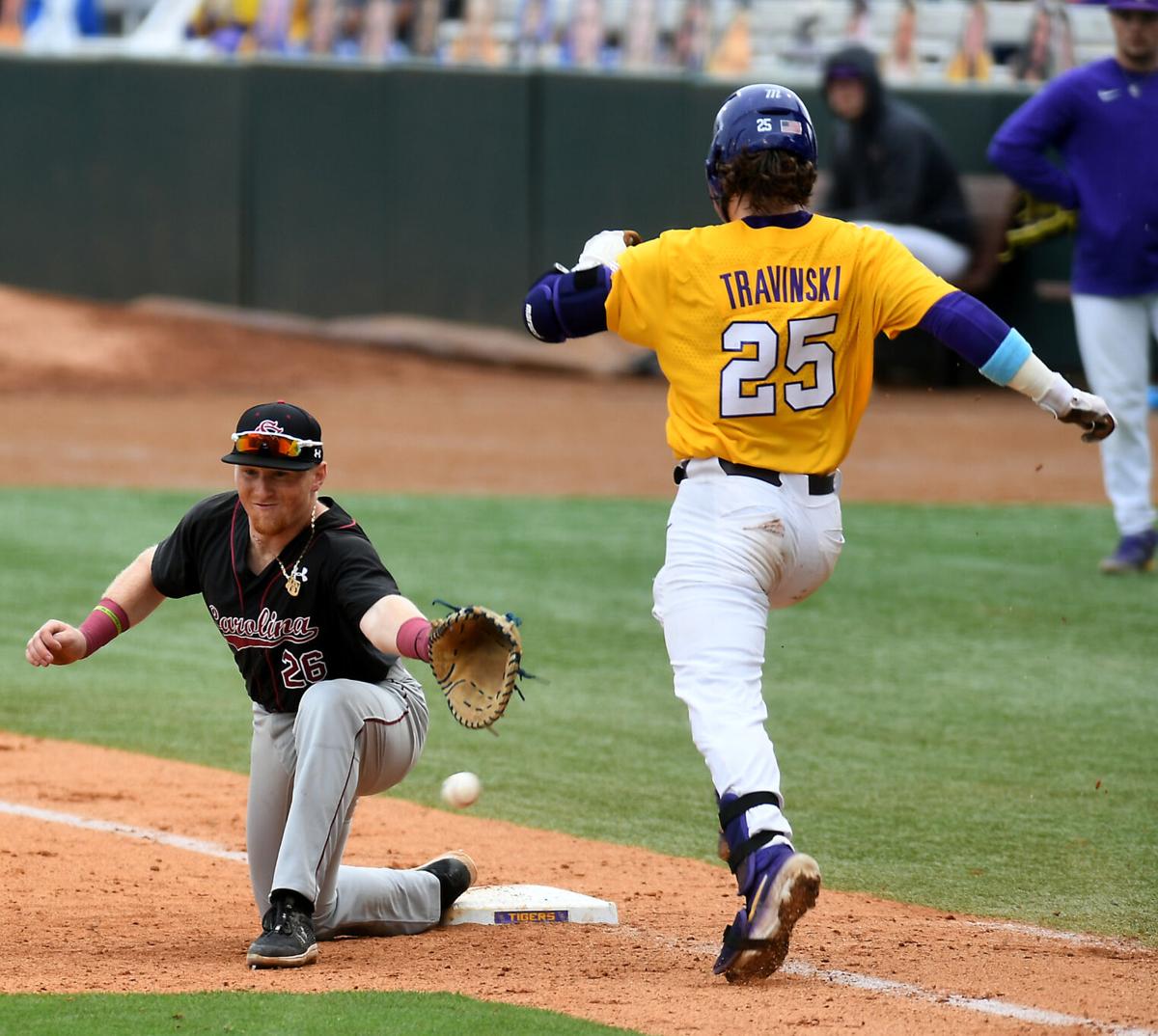 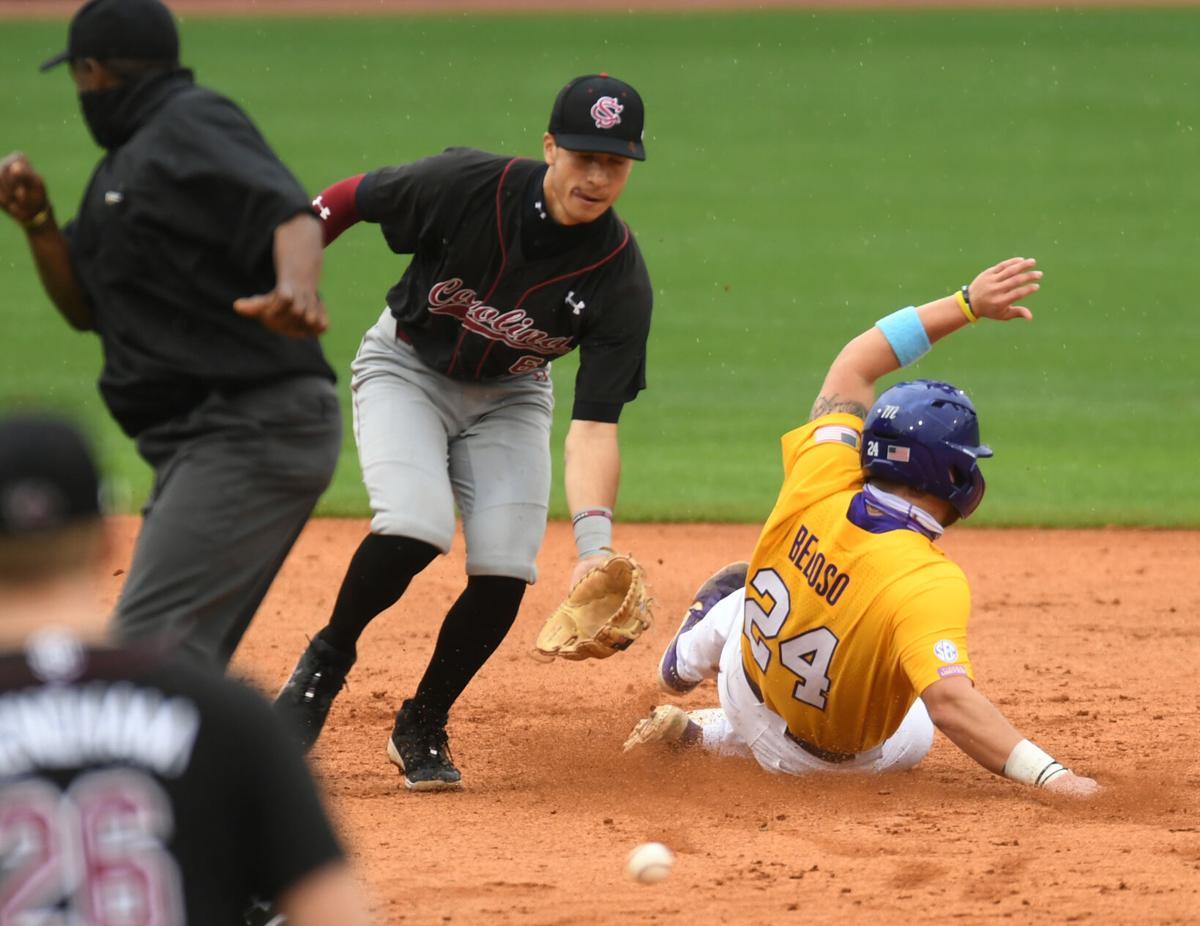 LSU’s Cade Beloso (24) slides safely into second on a steal in the fourth inning, biut batters couldn’t bring him in during LSU's 9-0 loss to South Carolina Saturday in LSU's Alex Box Stadium. 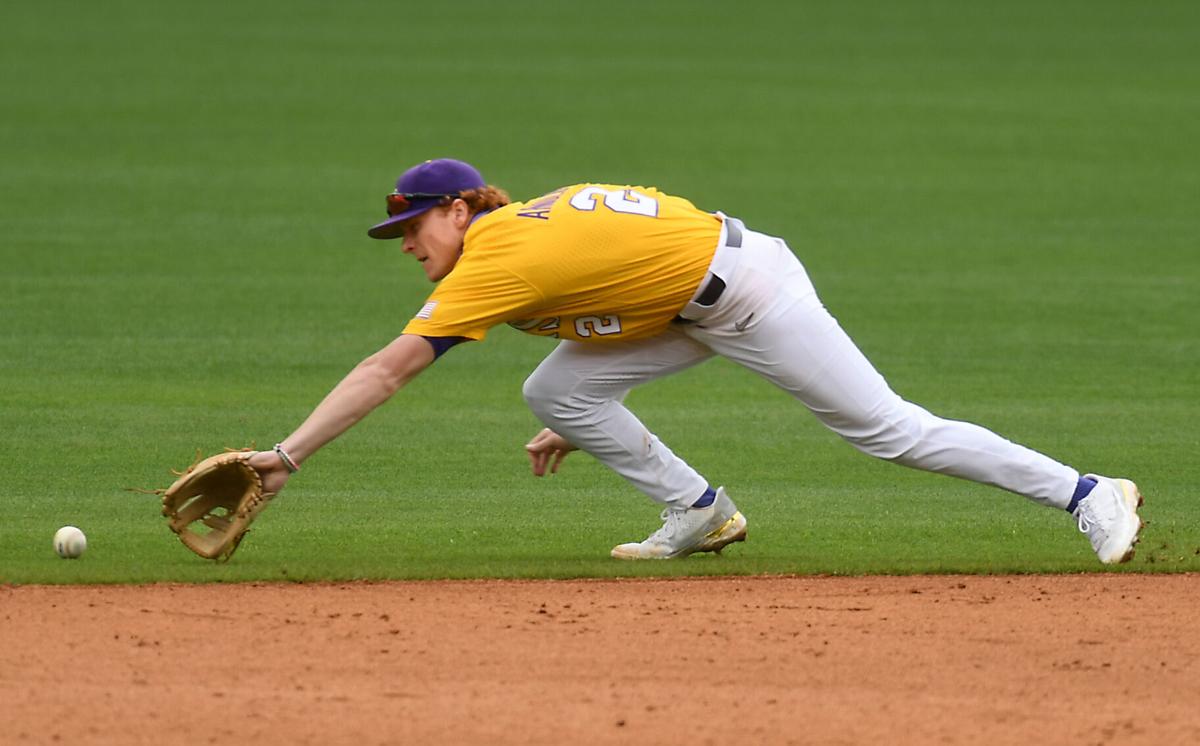 LSU’s Cade Beloso (24) slides safely into second on a steal in the fourth inning, biut batters couldn’t bring him in during LSU's 9-0 loss to South Carolina Saturday in LSU's Alex Box Stadium.

LSU couldn’t have asked for anything better than the first 15 innings it played against No. 5 South Carolina this weekend.

Not only did the Tigers take the first game of the Southeastern Conference series on Thursday, but they positioned themselves Saturday to be just three outs from clinching their first series over a ranked opponent this year. They held a two-run lead, and starting pitcher AJ Labas retired the last eight batters he faced. Better yet, they only had to hold on through the seventh inning as Saturday’s doubleheader was shortened because of Southeastern Conference rules.

But as it turned out, seven innings was still one too many.

In a season that already dealt several tough blows, Saturday seemed to deliver one of its harshest yet.

“What could have been a good day to win a series ended up being a rough day for us,” LSU coach Paul Mainieri said. “I feel bad for the kids. It didn’t turn out the way we wanted it to.”

Nothing seemed to go right for the Tigers (21-14, 4-11 SEC) after they took the field for the seventh inning of Saturday's opener.

Labas — who up to that point was having a masterful outing with just three hits through six scoreless frames — allowed a pair of leadoff singles, followed by a sacrifice bunt to move them into scoring position. That’s where his day ended. LSU handed the ball to closer Devin Fontenot to get the final two outs.

But on Fontenot’s first pitch, South Carolina's Braylen Wimmer launched a two-run double to the warning track in right field that popped in and out of Dylan Crews’ glove. Mainieri said that while the play was far from routine, with Crews leaping at the track, the freshman certainly felt it was one he should’ve had.

Two at-bats later, the Gamecocks celebrated their first lead of the series thanks to another two-run double, this time from Brady Allen.

Fontenot (1-2) was credited with the loss after Labas finally faltered.

“I just lost my command a little bit,” Labas said. “I wasn’t going after hitters and fell behind in counts, which is something I wasn’t doing all day. I was getting ahead in the first six innings and (South Carolina was) making weak contact. Then that seventh inning came around, I was leaving balls over the plate and not hitting my spots.”

An hour later, LSU was back on the field for the second leg of the doubleheader with the emotional deflation of having just thrown away a late lead against one of the top teams in the nation.

Mainieri said players discussed putting the first game behind them back in the locker room and believed they did just that. First baseman Tre’ Morgan echoed his coach’s sentiment.

“You have to win the next pitch,” Morgan said. “You can’t stay thinking about a tough game or a tough pitch.”

But unfortunately for LSU and freshman pitcher Blake Money, the Gamecocks were riding a high and kept the rally from the previous game going into the first few innings of the finale.

David Mendham started the deluge with a two-run homer into the right-field bleachers with two outs in the first inning to take an early lead. By the end of the third, South Carolina extended its lead to 6-0, scoring 10 unanswered run over the previous four innings. For good measure, South Carolina added three more runs in the sixth, including a solo homer from Wimmer.

Mainieri said the early rally in the finale was significantly more deflating than losing the first game for LSU.

“Of course going up early feels good, but we kind of stalled” Morgan said. “It’s nothing we changed. We just couldn’t get it going.”

LSU had a chance to win its second consecutive series last weekend against South Carolina, but with LSU leading 2-0 in the final frame of a seven-inning game, it struggled once again to record the last three outs.