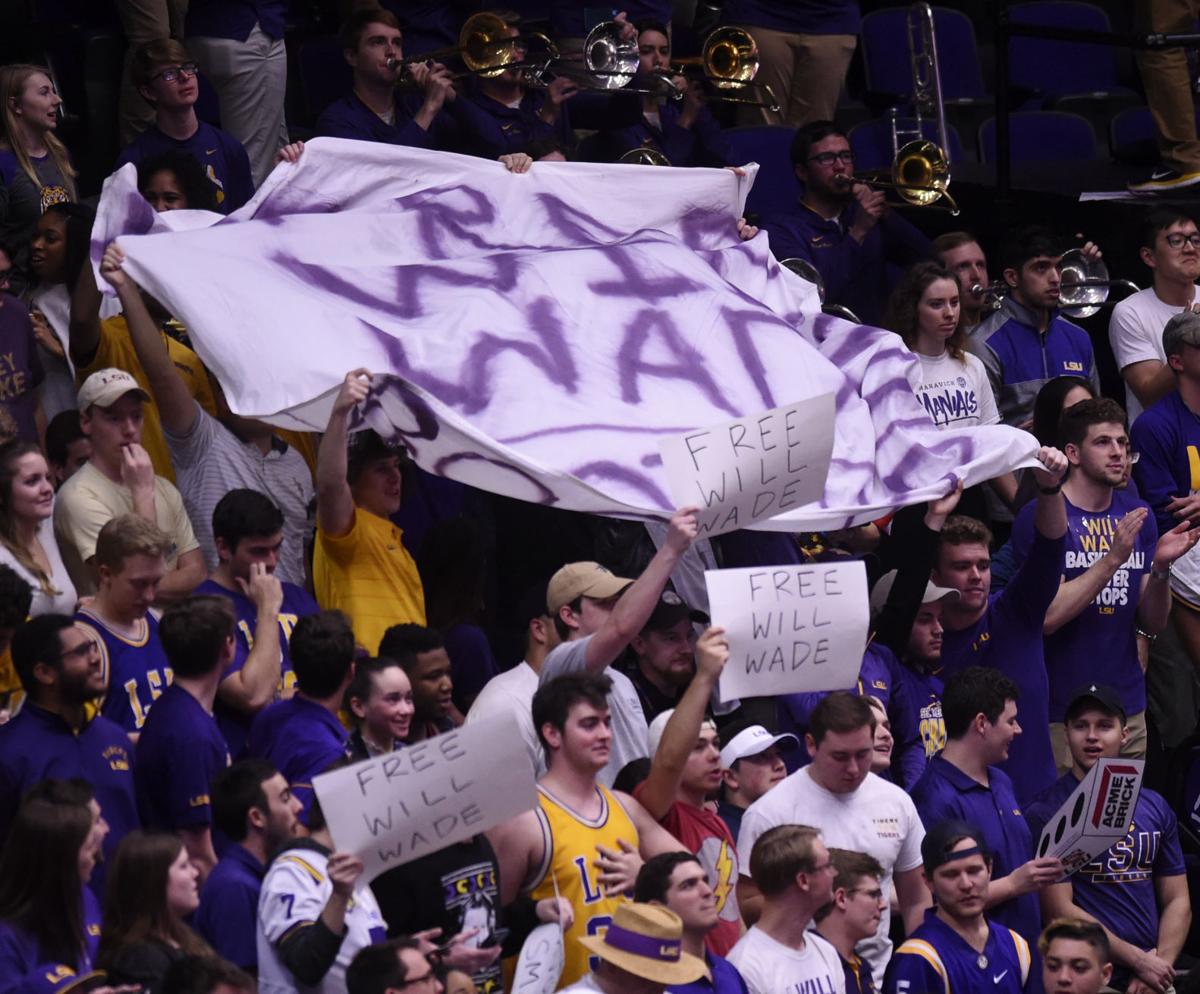 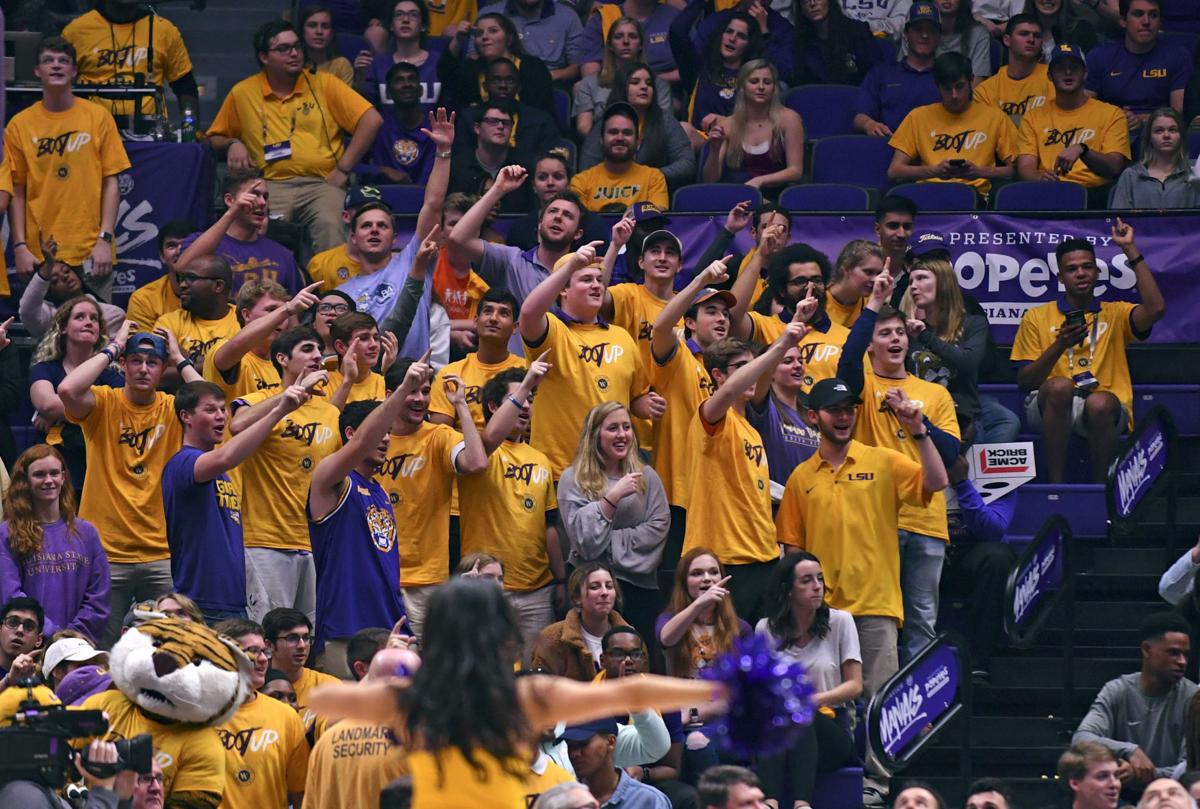 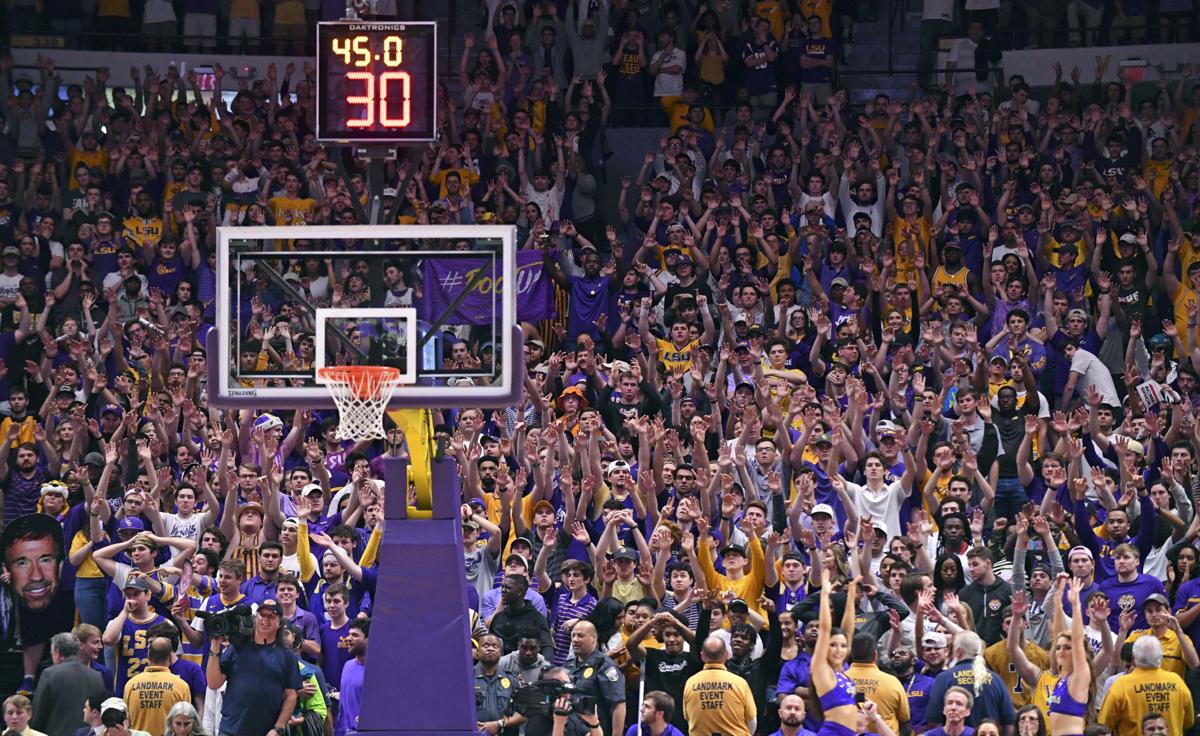 LSU students pack the stands as they cheer on the Tigers against Tennessee, Saturday, February 23, 2019, at LSU's Pete Maravich Assembly Center in Baton Rouge, La. LSU defeated Tennessee 82-80 in overtime.

LSU students pack the stands as they cheer on the Tigers against Tennessee, Saturday, February 23, 2019, at LSU's Pete Maravich Assembly Center in Baton Rouge, La. LSU defeated Tennessee 82-80 in overtime.

The No. 10 LSU basketball team had to face Vanderbilt on Saturday night with the outright Southeastern Conference title on the line and without its head coach and two of its top four scorers.

But with just eight players available and an emotionally charged sellout crowd in the Pete Maravich Assembly Center cheering their every move, the short-handed Tigers came together and crushed Vanderbilt 80-59.

"First, I'm really proud of our guys," LSU interim coach Tony Benford said. "I thought they showed a lot of resiliency ... they've been through a lot all season.

"They really came together and showed a lot of resolve with leadership from guys like Skylar Mays and Tremont Waters."

The win capped a magical regular season for LSU, which clinched the SEC title for the first time since 2009.

Earlier Saturday, just after university officials announced Smart would be held out as a precaution about possible recruiting violations, the Tigers clinched the No. 1 seed for the SEC tournament that begins Wednesday in Nashville, Tennessee.

As the top seed, LSU won't play until noon Friday against the winner of the game between No. 8 seed Florida and No. 9 Arkansas, who meet at noon Thursday.

Tennessee lost earlier Saturday at Auburn 84-80 and fell out of a first-place tie with LSU, but the Tigers didn’t need the help after all on senior tribute night.

Wanting to avoid sharing the title with Tennessee and Kentucky, which moved into position to get a piece of the championship with a 66-57 win against Florida, LSU (26-5, 16-2 SEC) went out and easily took care of business against Vanderbilt (9-22, 0-18).

The Commodores became the first team to go winless in the league since Georgia Tech finished 0-14 back in 1954. Vanderbilt also set a conference record with 18 losses in a single season.

With Wade watching from his home after he was indefinitely suspended by the school Friday, and with Reid and Smart looking on from the LSU bench, it was still a big night for the Tigers.

LSU president F. King Alexander and athletic director Joe Alleva suspended Wade after the coach declined to meet with them to address comments he made on a secretly recorded FBI phone call to convicted basketball middleman Christian Dawkins.

If LSU wants to add a Southeastern Conference tournament championship to its resume, the Tigers will need to win three games in three days in …

The conversation appeared to be about a recruiting offer to Smart.

Reid was sidelined with injuries sustained Wednesday night in LSU’s 79-78 overtime win at Florida. He took a knee to the groin and an elbow to the chin that left him with a bloodied lip.

Still, LSU was able to cut down the nets on both ends of the PMAC floor after the satisfying victory.

Among those taking part in the net-cutting were Wayne and Fay Sims, the parents of junior forward Wayde Sims. He was killed hours before preseason practice began in late September.

Darrius Days knocked down five 3-point baskets for a career-high 15 points, Waters had 14 points and Mays 13.

Former walk-on Marshall Graves, who was averaging just 1.8 points a game, had a career-high 12 and senior Kavell Bigby-Williams and Marlon Taylor chipped in with 10 points each.

Days and Graves came off the bench to set the tone early.

Days knocked down three 3s in a little more than seven minutes, sparking a 17-7 run that turned a two-point lead into a 29-17 advantage with 7:09 left in the first half.

"I was just getting open," Days said. "We kept executing and coach (Wade) always tells me to shoot the ball with confidence. That's what I did tonight."

Graves had three 3-pointers in the first half, with two of them coming in the same seven-plus minute span that Days did his damage.

"It felt amazing, just as you would expect," Graves, a junior, said after logging a career-high 26 minutes. "It's just a special blessing to play with this team.

"It's easy to have confidence and play well when you have great teammates behind you and great coaches that believe in you."

Vanderbilt, which saw its school-record losing streak grow to 19, was led by Saben Lee's 16 points. Yanni Wetzell was the only other player in double figures with 11.

With little resistance from Vanderbilt, which lost five-star point guard Darius Garland to a knee injury in November, LSU did what it had to do, then donned the traditional T-shirts and caps to cut down the nets.

"We deserve to be up here wearing these shirts and hats," Mays said. "We have come a long way. ... We have been through a lot of adversity. We still have more to go, but we are happy where we are right now."