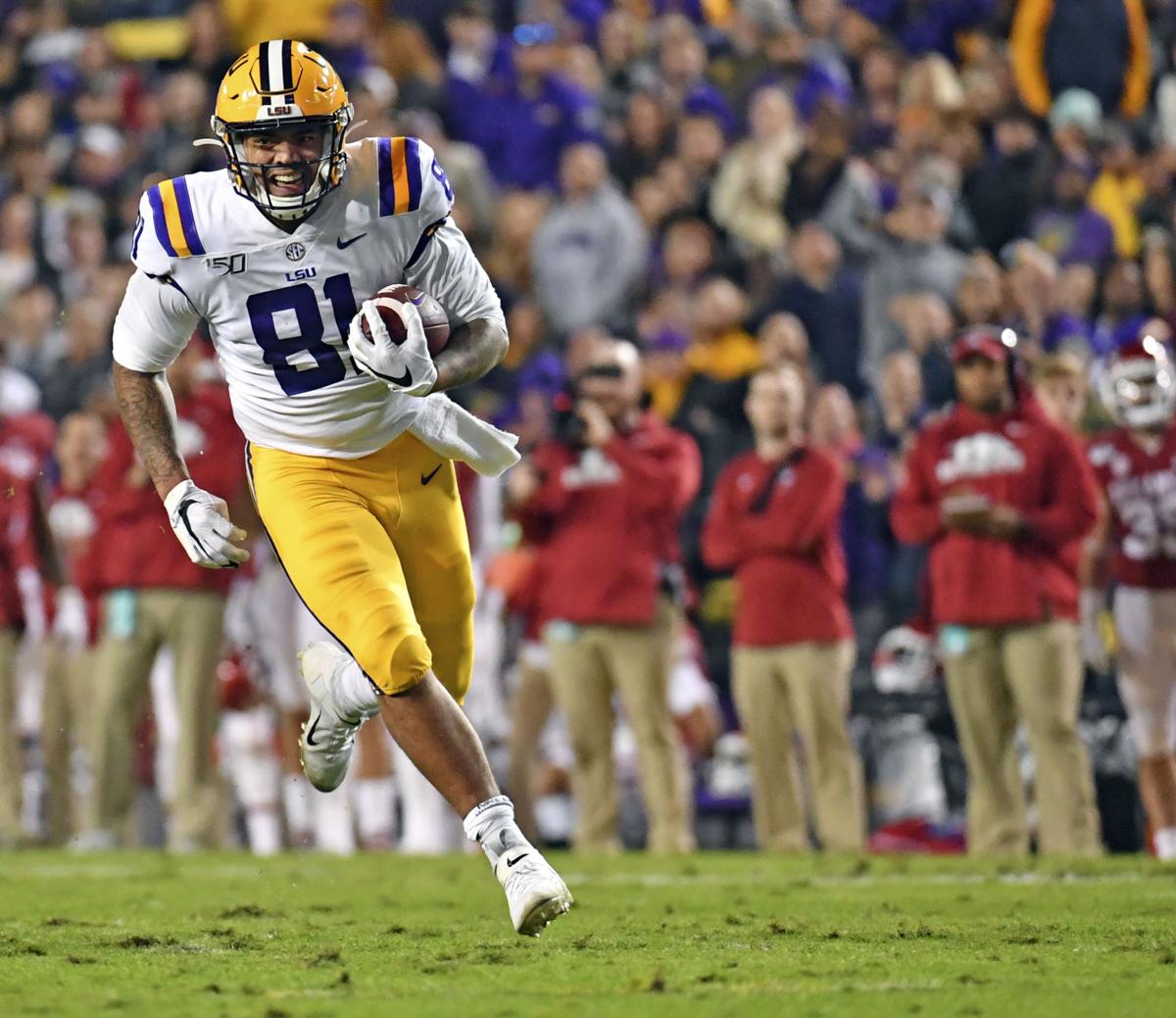 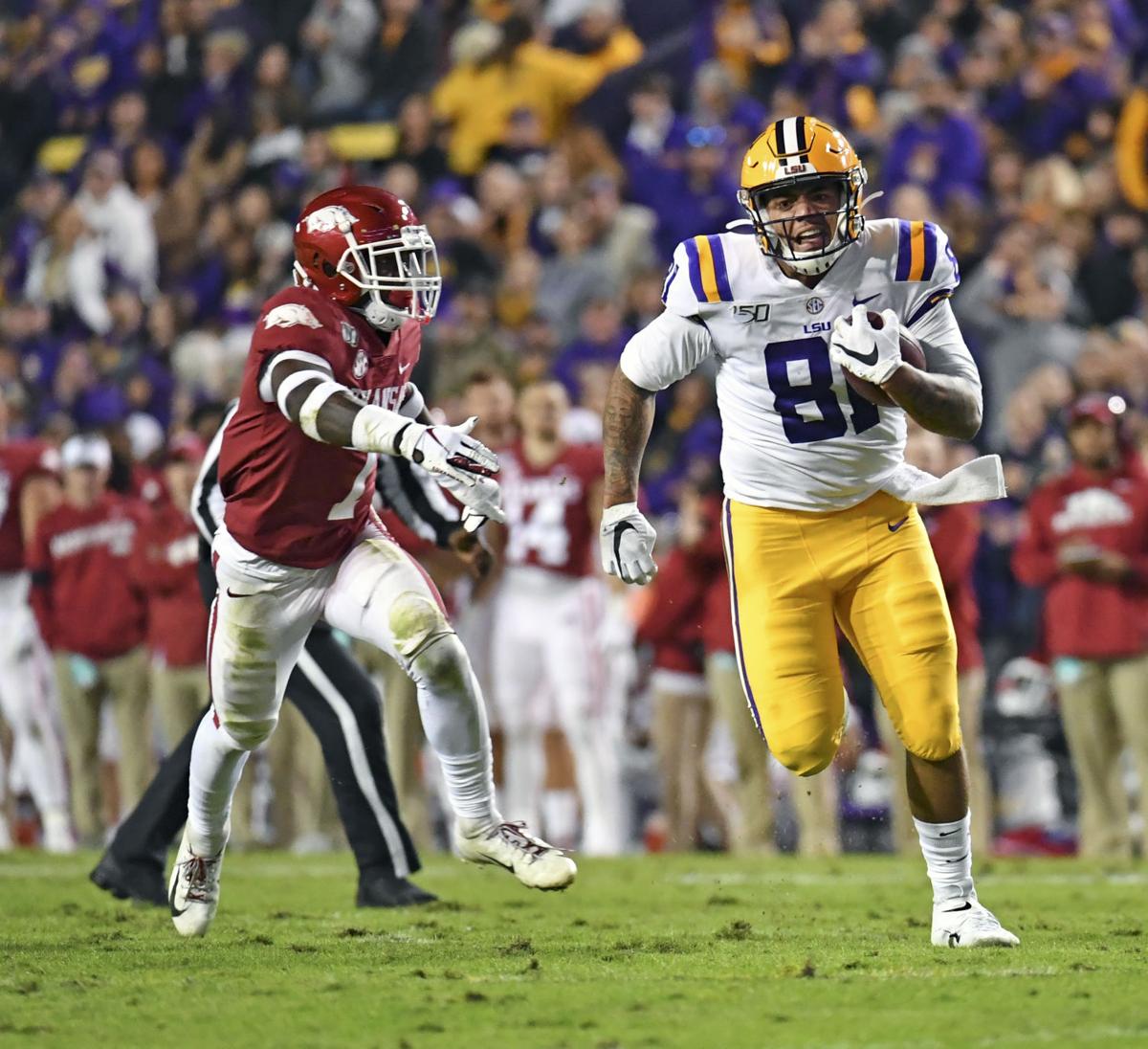 Arkansas defensive back Joe Foucha (7) closes in on LSU tight end Thaddeus Moss (81) on the stop in the first half between the Tigers and the Razorbacks, Saturday, November 23, 2019 at LSU's Tiger Stadium in Baton Rouge, La.

Arkansas defensive back Joe Foucha (7) closes in on LSU tight end Thaddeus Moss (81) on the stop in the first half between the Tigers and the Razorbacks, Saturday, November 23, 2019 at LSU's Tiger Stadium in Baton Rouge, La.

Thaddeus Moss came here looking for a chance. He thought his talent had deteriorated during his freshman season at NC State, so he transferred from the program and began searching for a place that felt comfortable.

Moss visited LSU, the first school he called, for the Tigers’ spring game in 2017. He arrived on a Friday. He understood LSU’s history of producing NFL players, and one day that weekend, he drove around campus with coach Ed Orgeron.

They discussed Moss’ future, the weight of his name and the plans Orgeron had for LSU. The coach admitted mistakes he made in his youth, and Moss believed Orgeron cared about his players. Moss received a scholarship offer on Sunday, two days after he arrived. He committed the same day.

Two years later, after multiple surgeries and months of waiting, on Saturday night against Arkansas, Moss broke the single-season LSU record for receptions by a tight end.

With the position no longer used as an extra offensive tackle, Moss has flourished inside LSU’s new system. He has chipped defensive ends and blocked, but he has also given quarterback Joe Burrow a reliable target in the passing game.

Moss recorded four receptions during the 56-20 win inside Tiger Stadium, which sealed LSU’s first trip to the Southeastern Conference Championship since 2011. The Razorbacks double-teamed wide receivers Ja’Marr Chase and Justin Jefferson in the first half, so the Tigers leaned on running back Clyde Edwards-Helaire and Moss, who finished with a career-high 68 yards.

“He's like that magic piece,” Edwards-Helaire said. “He makes everything mesh.”

Clyde Edwards-Helaire stepped out of a tackle and strode the sideline for an 89-yard touchdown toward the padded gates of Tiger Stadium.

Moss approached this season as an opportunity. He had missed two seasons after he transferred to LSU, one because of NCAA transfer rules and another because of injuries.

As he ran a route during the first week of June 2018, Moss felt a pop. He had fractured the fifth metatarsal in his left foot, a bone that gives a foot its arch. He underwent two surgeries, and even now, the plate in his foot nags him whenever he runs on artificial turf.

Earlier this year, Moss worked out on campus during spring break. He trained with his father, NFL Hall of Fame wide receiver Randy Moss. He became the leader of LSU’s tight end room.

When preseason practice arrived, Moss visualized the season opener, his first game in nearly three years. He buzzed when he thought about playing again.

Moss gradually became an integral part of LSU’s offense. He caught his first career touchdown against Utah State, then he grabbed seven passes against Auburn. Every week, Moss has talked with Edwards-Helaire about sealing run blocks.

“And also, man,” Edwards-Helaire said, “the guy can catch.”

When LSU needed an offensive spark against Arkansas, leading 7-6 in the second quarter after two scoreless possessions, it turned to Moss. He caught a 20-yard pass on the first play. He hauled in a 30-yard reception three plays later, pulling LSU into the red zone. The Tigers soon scored as their offense came back to life.

Moss’ second catch on the drive gave him the school record for receptions in a season by a tight end. He passed Mitch Andrews and Malcolm Scott, who had each caught 34 passes over three decades ago.

Moss finished the game with 36 receptions this season for 423 yards. The LSU single-season record for yards receiving by a tight end is 439, set by David Lafleur in 1996.

His production increasing as the season nears its end, Moss likely will break that record next weekend against Texas A&M. He has caught at least four passes in each of his past four games, and Orgeron said his production has helped LSU recruit tight ends.

Clyde Edwards-Helaire added his name to an elite list in the third quarter of LSU’s game with Arkansas on Saturday night in Tiger Stadium.

The vision Orgeron shared with Moss during that ride two years ago has come to fruition. The redshirt junior has made himself an essential part of LSU’s offense, a player whom defenses cannot ignore. Orgeron called him one of the most improved players in the program.

“Look at what he's done,” Orgeron said. “I think he has a bright future.”

Last week, after Moss dragged his toes inbounds for a highlight catch against Alabama, he said he had not reached his peak. He had made catches like that before. For Moss, this season might signal the beginning.