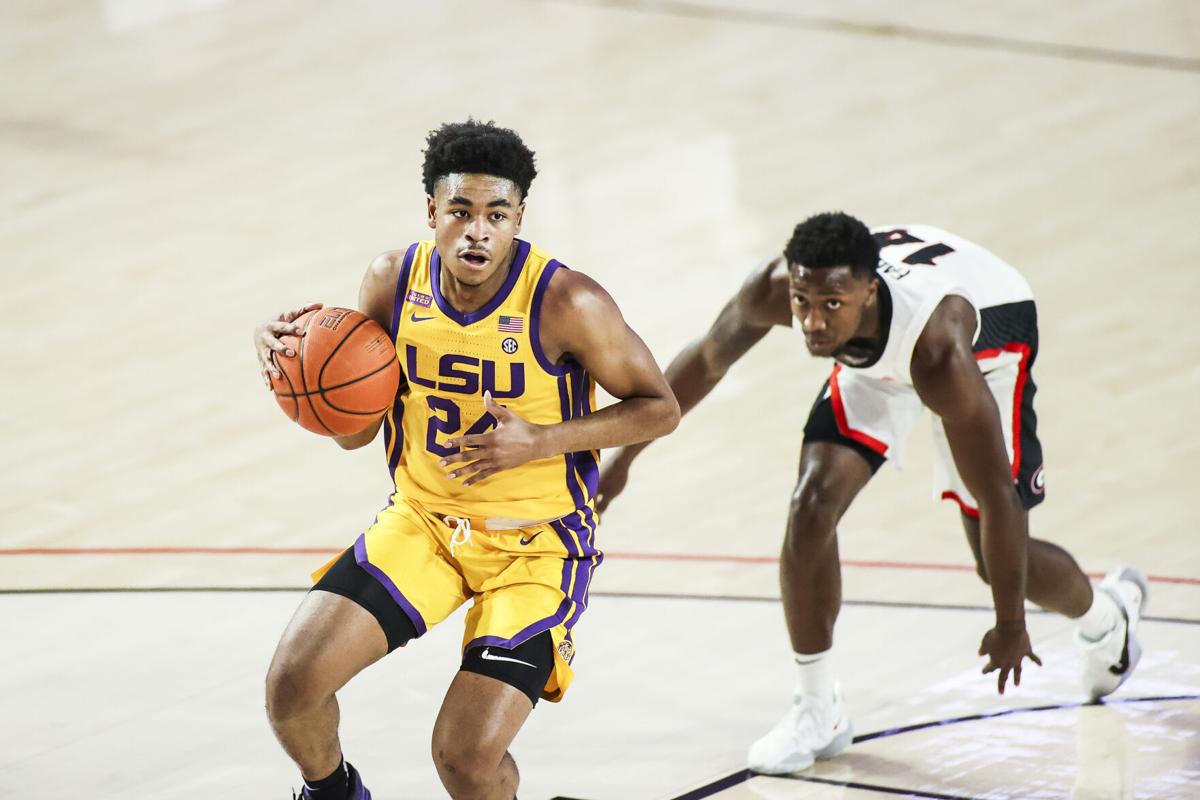 LSU's Cam Thomas drives into the lane against Georgia  on Tuesday in Athens, Ga. 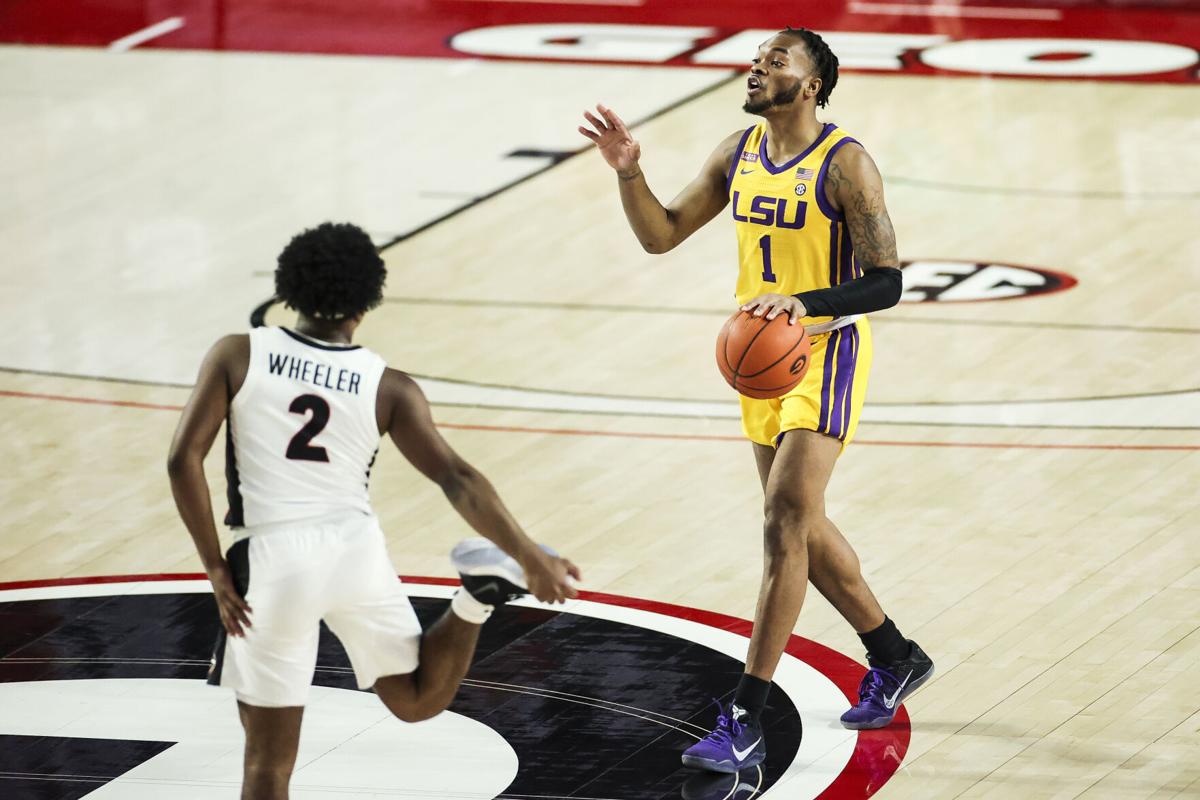 LSU's Javonte Smart brings the ball up court against Georgia on Tuesday in Athens, Ga.

LSU's Cam Thomas drives into the lane against Georgia  on Tuesday in Athens, Ga.

LSU's Javonte Smart brings the ball up court against Georgia on Tuesday in Athens, Ga.

ATHENS, Ga. — After putting together two of its more complete games this season in the past two outings, the LSU basketball team was seeking to continue its run of good play of late against Georgia.

Instead, it was just the opposite — a complete and total breakdown for LSU in a 91-78 setback to Georgia in Stegeman Coliseum.

“Well, it was an embarrassing performance … we got whipped every way we could get whipped,” LSU coach Will Wade said. “All of our poor habits came out. They gave us a bunch of resistance, so give Georgia a bunch of credit.”

But much of what they did, the sluggish Tigers did to themselves — especially in the closing minutes of the first half.

After playing on near-even terms with the Bulldogs for 14½ minutes, it all started to get away from the Tigers when they were outscored 21-6 over the final 5:21 of the first half and trailed 45-29 at the break.

LSU (14-7, 9-5 Southeastern Conference) was powerless to stop the onslaught once Georgia (14-9, 7-9 SEC) started to roll after a Mwani Wilkinson dunk helped the Tigers pull to within a point at 24-23.

However, two putbacks by Tye Fagan on back-to-back possessions helped Georgia stretch the lead out a little and the Bulldogs never looked back in winning for just the second time in five games.

“Coach (Tom) Crean and their staff, they had a great game plan,” Wade said. “They were more physical, they beat us to loose balls, they played with better spirit than we did.

“Like I said, it was total embarrassment,” he added. “I feel bad for all of our fans; I feel bad for everybody who follows our program. It was laughable, our effort, and it starts with me.”

The win was highlighted by the first triple-double in Georgia program history.

Point guard Sahvir Wheeler, who had 21 points in an overtime loss to LSU in Baton Rouge on Jan. 6, finished with 14 points, 11 rebounds and 13 assists.

“Wheeler, first off, is a great player,” Wade said. “He’s extremely, extremely quick and he did a great job exploiting us. He was able to get in the paint.”

The 5-foot-10 Wheeler, the smallest man on the court, and 6-8 forward Toumani Camara, who had a double-double with 22 points and 10 rebounds, obviously played the leading roles in snapping LSU’s three-game winning streak.

“Camara whipped us and Wheeler absolutely controlled the game.”

Haleigh Bryant may end up retiring the Southeastern Conference freshman of the week award.

With the setback, the Tigers also lost an opportunity to take a half-game lead over Arkansas for second place in the SEC standings. The Razorbacks host league-leading Alabama on Wednesday night.

K.D. Johnson, who didn’t play in the earlier matchup against LSU, added 21 points for Georgia and Tye Fagan had 18.

LSU was led by Cam Thomas with 22 points, while Javonte Smart had 19 and Trendon Watford 13. Freshman Jalen Cook came off the bench for a career-high 11 points.

Watford had his second straight double-double when he pulled down 10 rebounds, but LSU was outrebounded 47-40.

LSU, which had shot better than 51% in each of its past three games, struggled in the first half in hitting just 33.3% from the field — 25.0% from beyond the 3-point arc — to play a big role in its 16-point halftime deficit.

But that wasn’t all, not by a long shot.

Three of the tallest Tigers got into foul trouble in the first half, which didn’t help. Darius Days picked up three, while Watford and Wilkinson each had two.

While Georgia didn’t shoot that well in making 42.1% of its shots, it had nine offensive rebounds in the first half — one of LSU’s main deficiencies this season. The Bulldogs finished the game with 16.

Suffiently inspired against a lethargic LSU team, Georgia continued piling it on the second half and built a 22-point lead with 10:46 to play.

At that point, Georgia had outscored LSU 45-24 in a span of 14 minutes, 35 seconds going back to the first half.

Add it all up and it was quite the frustrating night for Wade.

“Just an all-systems breakdown,” he said, “as disappointing a night, as bad a night, as we’ve had.”

LSU vs. UL, Wednesday: who's starting, how to watch, what to watch for

Who's starting, how to watch and what to watch for when LSU and UL play Wednesday night in Lafayette.