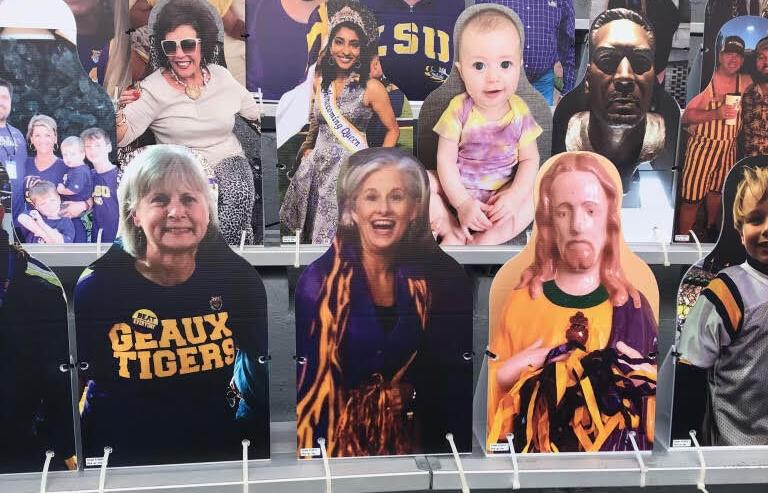 Cut outs of LSU fans and lifelong friends Ava Lancaster (bottom left) and Rhonda Armor (center bottom) along with a cutout of Armor's purple and gold-clad statue of Jesus in Tiger Stadium. 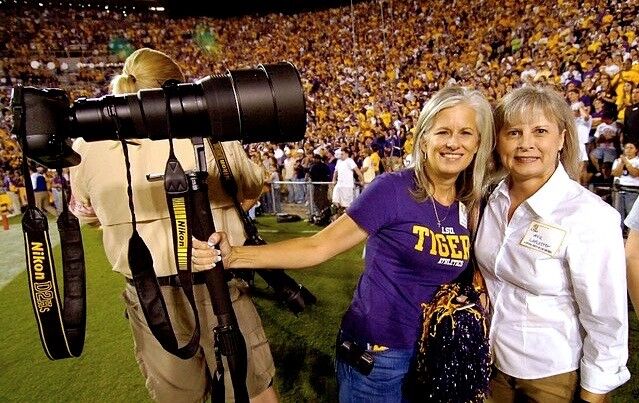 Rhonda Armor (left) and Ava Lancaster on the field in Tiger Stadium on Oct. 20, 2007 for the LSU-Auburn game.

Cut outs of LSU fans and lifelong friends Ava Lancaster (bottom left) and Rhonda Armor (center bottom) along with a cutout of Armor's purple and gold-clad statue of Jesus in Tiger Stadium.

Rhonda Armor (left) and Ava Lancaster on the field in Tiger Stadium on Oct. 20, 2007 for the LSU-Auburn game.

If the LSU Tigers are to pull off what would be a massive upset next Saturday against Alabama, they’re probably going to need some help.

Maybe it can come from lifelong friends Rhonda Rogers Armor and Ava Lancaster, who will be in Tiger Stadium along with their friend, LSU Jesus … in a sense.

Allow us to explain.

Armor and Lancaster met as LSU students in 1976 in the organization known as Angel Flight (now Silver Wings). Ava was a senior, Rhonda a freshman. They quickly found out they were both North Louisiana girls whose birthdays were one day apart: Lancaster, from Tallulah, on Oct. 26; Armor, from Gilbert, on Oct. 27.

Friendship led to being apartment-mates to being intertwined in each other’s lives. They shared ski trips. Broken bones. Singing in the church choir. Working summer camps together. Children being born. Parents dying. Bricks of memories, mortared together by lots of margaritas and Mexican food.

The clearest image of trouble for LSU is a football spiraling, descending, dropping into the hands of Alabama wide receiver Devonta Smith, who…

Theirs have been lives of devotion to LSU football. Lancaster even fought the mad scramble for free Tiger Stadium turf last year when the school gave it away as part of a renovation project, sticking an LSU flag in a patch of it in her flower bed and calling it “Joe Burrow Field.”

Their knowledge of football has even had its own fans of sorts over the years.

“Men used to come over to us (at games) and say, ‘Can you come teach my wife about football?’ ” Armor said.

Even though Armor moved to Houston after working for the LSU Foundation — Lancaster is a retired St. Amant High School guidance counselor still living in Baton Rouge — they have maintained their batting average of meeting for at least one home game every season. Usually, that game is the one closest to their birthdays.

But not this year.

The last time Armor and Lancaster saw each other in person was Mardi Gras, their annual birthday game ritual tossed onto the ever-growing pile of collateral damage from the coronavirus pandemic. They and a larger circle of friends see one another only in a weekly Zoom call.

As the season drew near, the two friends heard of a way to bridge the exile in their lives. They would join the surprisingly large contingent of LSU fans (about 3,000 so far) to have cutouts of themselves strapped onto seats in Tiger Stadium.

Somehow, the project made the miles between them shrink just a little.

“We were feeling sad for ourselves over the football situation,” Armor said. “This helped us feel better.”

“It was just the fun we had on the phone that day,” Lancaster said, “hunting down the photos and the memories. Thinking about the games we were at and what happened was a lot of fun. That was a birthday gift on its own.”

Editor’s note: This is the seventh in a series of excerpts from The Advocate’s upcoming book, “LSU BY THE NUMBERS,” celebrating the best playe…

The duo, however, made itself a trio. They also bought a cutout of a photo for a ceramic statue of Jesus that Armor owns, which is clad in purple and gold robes.

They call him LSU Jesus. Armor found him in a Breaux Bridge antique shop she visited during a trip from Baton Rouge back to Houston.

“We thought, ‘Let’s get one for him, because they (LSU) are really going to need help this year,” Armor said.

How right they were.

The only snag was that Armor and Lancaster couldn’t be sure that their cutouts were grouped together in Tiger Stadium. Neither at first was Heidi Weatherbee, LSU’s director of fan engagement, especially after LSU workers took the cutouts down and stored them before Hurricane Delta came ashore in southwestern Louisiana on Oct. 9.

But when the cutouts were replaced in the stadium before the Oct. 24 South Carolina game, there they were. Lancaster, Armor and LSU Jesus together, on the front row of Section 212 in Tiger Stadium’s north end zone in front of a cutout of Kevin Mawae’s Pro Football Hall of Fame bust and one of 2018 LSU Homecoming queen, Sarah Perkins.

“I remember hearing about LSU Jesus from our installation crew,” Weatherbee said.

How exactly the three got together, Weatherbee isn’t sure. The order numbers for the three cutouts weren’t sequential.

“I’m going full serendipity on this one,” Weatherbee said. “I credit LSU magic.”

Armor and Lancaster are planning to see each other this week, and Lancaster said she will be attending the Alabama game with some other friends. The two are hoping to keep their streak going by attending LSU’s home finale together, Dec. 5 against Ole Miss.

As for LSU’s cutout program? Weatherbee said you can still purchase them, and the school has plans to sell cutouts that will be installed for basketball season in the Pete Maravich Assembly Center. No plans yet, she said, for baseball and softball season.

No word, either, on whether the cutout of LSU Jesus will grace the PMAC this season. Perhaps that will rest on whether he can help the Tigers turn the tide Saturday against Alabama.

Football rules the life of LSU freshman Eli Ricks, every action he makes determined by one goal: to become the best cornerback in the country. The sport represents more than a passion or job. It consumes him.