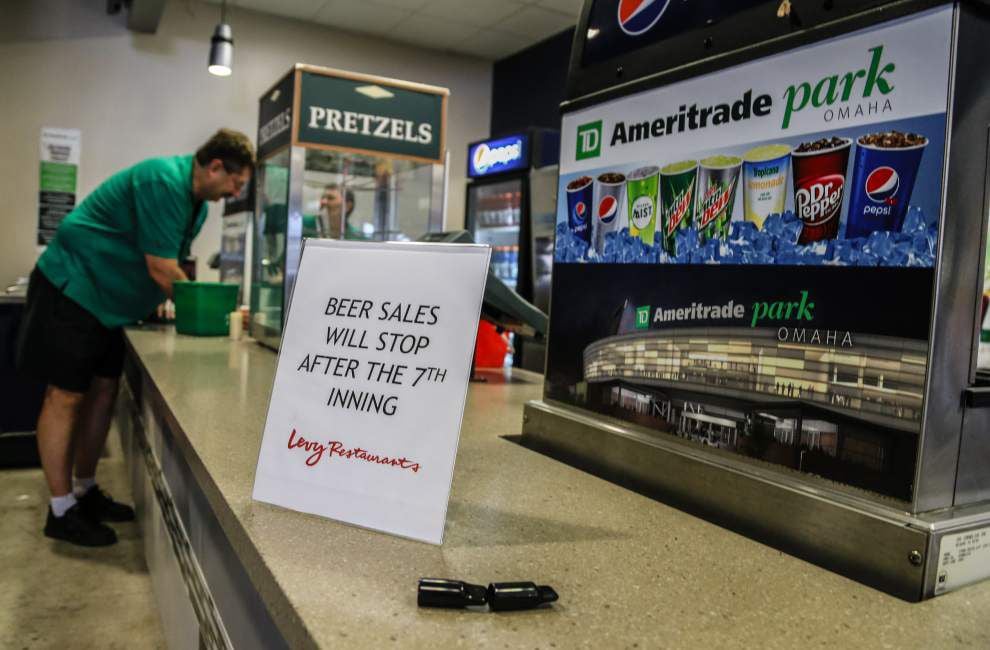 A sign proclaiming that beer sales will stop after the 7th inning is seen at TD Ameritrade Park in Omaha in 2016. The NCAA pilot program to sell beers at championships produces "favorable" results, the association said. 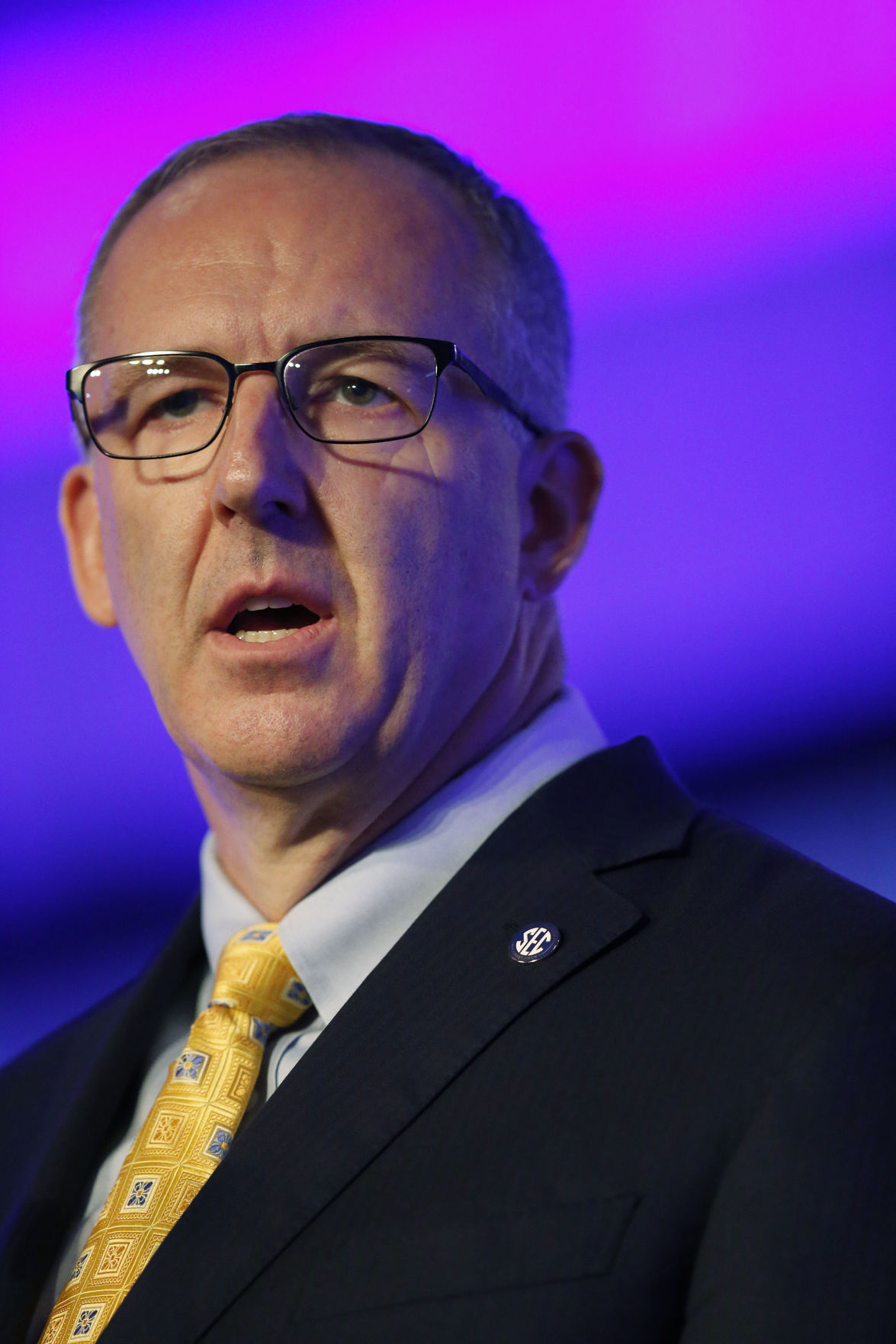 BIRMINGHAM, Ala. — The NCAA this week is likely to abolish long-standing legislation outlawing alcohol sales at its championship events.

The NCAA Division I Council is set to vote on a proposal to eliminate a policy that has long kept booze out of championship events. The governing body for college athletics has used a waiver the past two years to sell alcohol at various championships, including the College World Series.

Such a waiver would no longer be needed if the council approves the proposal at meetings Tuesday and Wednesday in Indianapolis, which is expected.

The potential decision only furthers the growing push from some SEC schools — LSU included — to lift the league’s ban on stadium-wide alcohol sales. Commissioner Greg Sankey on Monday insisted that it won’t be “easy” to overturn such a “decades-long tradition that’s been in place,” he said during a panel discussion at the APSE Southeast Region meeting at Samford University.

The NCAA’s decision is only a “data point,” he said, in the conversation and not a “determinative for our direction.”

The league’s direction, though, is swerving. Several unnamed member schools are blocking a path to overturn what many believe is an archaic policy. SEC bylaws restrict alcohol sales to private, controlled areas — in other words, premium seating.

But a gray area is emerging.

At least two SEC programs, Texas A&M and Auburn, opened this season a type of beer garden in their baseball stadiums, selling alcohol in sequestered areas removed from bleacher seating. LSU opened a football version of this in 2017 atop the south end zone, turning a 1,500-seat general admission area — with bleacher seating — into a designated space for alcohol sales that the school calls The Skyline Club.

Admittance into the spaces at Texas A&M and Auburn is $5. Tickets in the Skyline Club are $45 and up. The league approved plans for these newly created areas, as they met “the expectation on oversight, private area and controlled space for review,” Sankey said.

How NCAA vote could alter college football eligibility for the better, coaches and players say

“Put 2-9 in,” a disgruntled Nick Saban said into his headsets.

'A brotherhood': LSU LBs Jacob Phillips, Tyler Taylor battling on the field, roommates off of it

Jacob Phillips and Tyler Taylor aren’t only challengers in one of the most hotly competitive battles for a starting job on the LSU football team.

“We have some that would like to remove the policy and have others that have no interest in that,” Sankey said. “From a stadium wide (standpoint), there are those that think ‘Let’s just take the restraint off the conference level.’ But that’s not a unanimous or, I’m not sure right now, a majority position.”

The policy only can change through a majority vote of the 14 league presidents and chancellors, a possibility next month at the SEC’s spring meetings in Destin, Florida. LSU athletic director Joe Alleva has made it clear in which corner his school stands: LSU wants the ability to sell, at least, beer throughout Tiger Stadium and other venues.

Alleva has said in the past he believes the venue-wide sale of beer could help attendance. He said last fall that there are “a significant number of presidents that think that needs to be done.”

The sale of beer and wine is spreading quickly throughout college football. About 40 schools offered beer, at least, to the general public in 2016. Alcohol is sold at most bowl games and College Football Playoff events, including bowls tied in to the SEC — like the Sugar Bowl and Outback Bowl.

SEC schools are skirting around the policy by adding premium seating, like LSU’s Skyline Club. Discussions are on-going to expand that model elsewhere in Tiger Stadium, officials said, but that is contingent on the SEC reversing its alcohol ban.

It is something the NCAA could do soon after a successful pilot program of selling beer and wine at championship events in 2016-17. The association, in a document released in February, called the results of the pilot program “favorable.” It even diminished the number of alcohol-related incidents, “in some cases significantly.”

Sankey said he spent some of last fall learning about the research how lifting a ban might actually help decrease incidents. While pregame and early-game incidents decreased, the commissioner wondered aloud Monday about late-game issues.

“If there’s a steady flow (of alcohol) through the game, what are the outcomes?” he sad. “I think that right now is a part of length discussion and debate. I can remember some NFL games where it flows freely that I have attended where you end up in some really uncomfortable situations, and that’s why I think the responsible way to handle this is to continue the dialogue, see how we can manage oversight properly but still make sure our stadiums are family-friendly, if you will.”

Fans expecting to see a flawless offense in LSU’s spring game Saturday may be disappointed.

LSU football spring game: The early forecast, and what to expect in case of rainy weather

At Saturday's LSU football Spring Game -- set to begin at 5 p.m. -- it'll be all about the timing.

Saahdiq Charles and Ed Alexander are back — just in time.