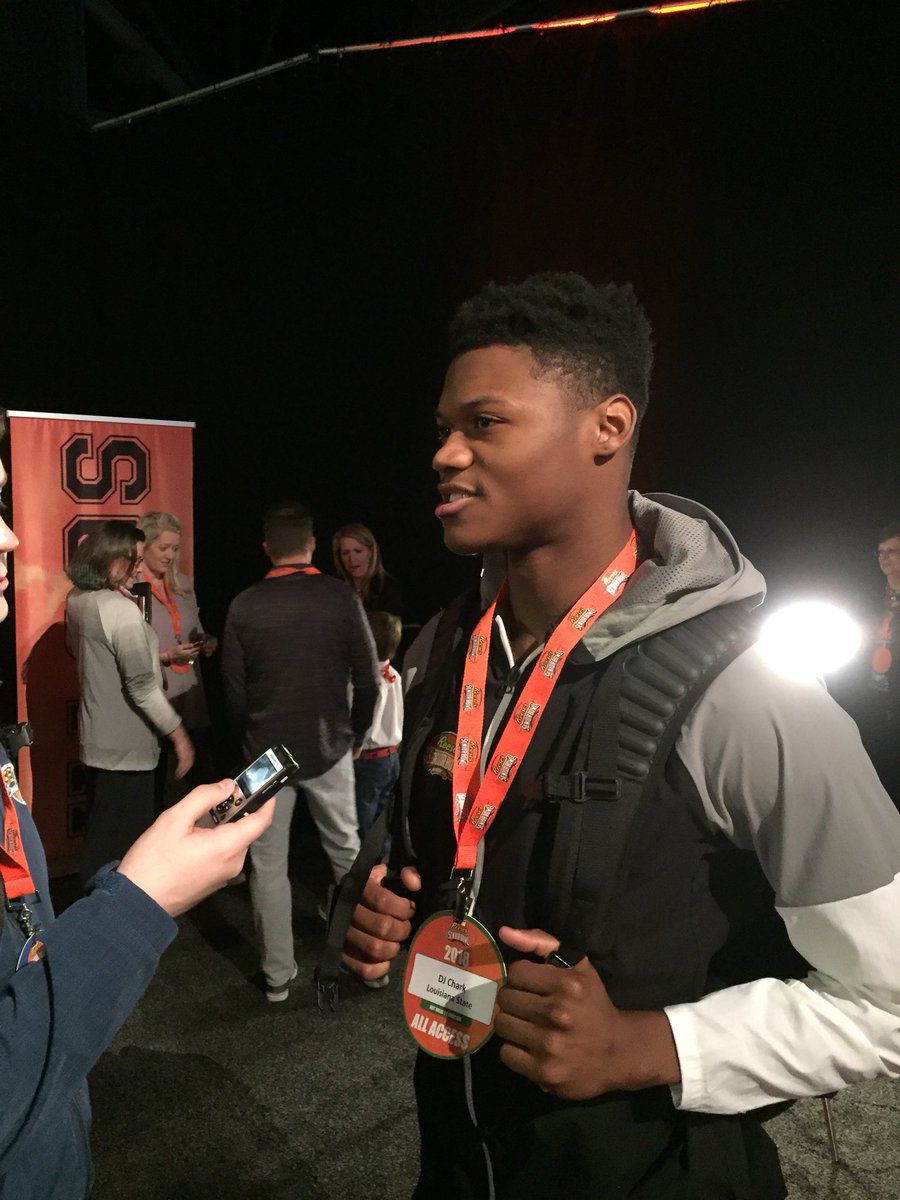 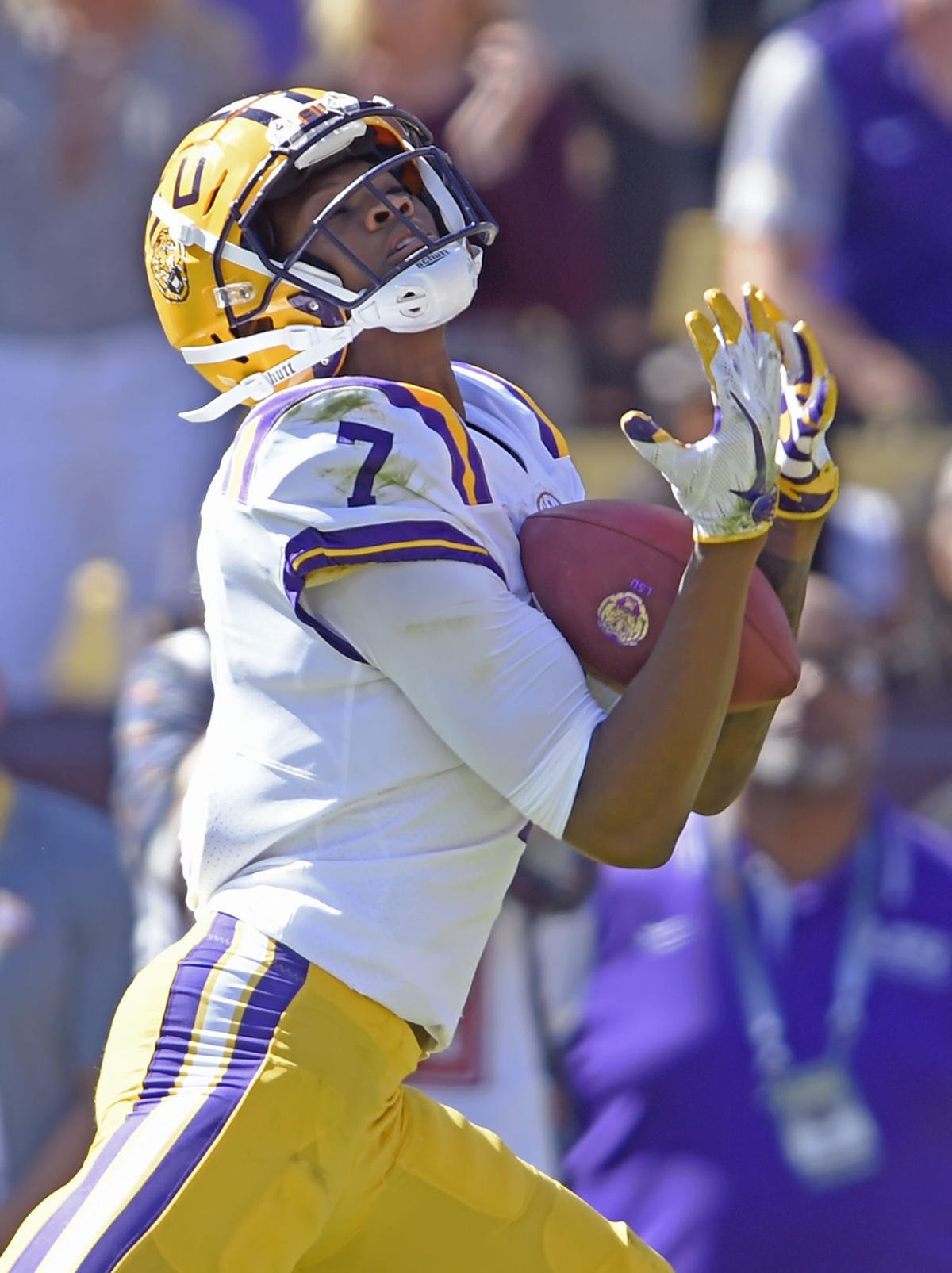 LSU wide receiver DJ Chark (7) pulls in a 45-yard touchdown pass from quarterback Danny Etling for the first score of the Tigers' 33-10 victory against Arkansas on Saturday in Tiger Stadium. Chark also had a 68-yard scoring catch from Etling in the fourth quarter.

A high pass sailed through his hands during 7-on-7. Another sailed too far behind him. A third flew 4 feet over his head.

On the first big stage of this four-month-long process ahead of April’s NFL draft, Chark missed on his first three targets in front of dozens of NFL scouts, executives and coaches. Then he showed off the reasons for his two most popular nicknames: "Flash" and "Smooth."

The former LSU receiver and return man used his well-known speed to race by a cornerback, smoothly making a basket catch in stride at the 5-yard line and gliding past a safety into the end zone — a 40-yard touchdown reception on a sun-splashed day at Ladd-Peebles Stadium.

"I feel like I can change a game," Chark said.

“The thing that jumps out about DJ is he can fly,” said Phil Savage, the Senior Bowl executive director. “Big-time straight-line speed.”

Chark, an Alexandria native, waited about halfway through the opening practice to show off those wheels, but his time here began upon his arrival Sunday night. He has already met individually with about 25 NFL teams — important discussions with scouts and executives that unfold at the Renaissance Riverview Plaza in this city’s Mardi Gras-themed downtown.

The other three ex-LSU players here — running back Darrel Williams and defensive linemen Greg Gilmore and Christian LaCouture — all say they’ve met with at least two-thirds of the NFL's teams in this weeklong event.

The first day of practice — all four former Tigers are on the South team, each donning their LSU helmets — brought some familiar sights. Gilmore and LaCouture, for instance, spent time next to one another on the South’s defensive line in full team drills. Chark was, at one point, matched up against former Alabama cornerback Levi Wallace, an old Southeastern Conference adversary. And Williams bulled into would-be tacklers — including Gilmore and LaCouture — like he did for the past four years on the Charles McClendon practice fields.

This seems like a yearly occurrence — purple and gold scattered across the field of Senior Bowl practices. The difference this year: Chark is the only one of the group who received an original invitation. Gilmore, Williams and LaCouture were additions after other invitees declined to play in the game, set for 1:30 p.m. Saturday on NFL Network.

By most accounts, Chark is a Day 2 projection, falling likely into the second or third rounds. One analyst believes he’ll be the highest-drafted receiver participating in the Senior Bowl.

“LSU’s offense didn’t cater to receivers in putting up big numbers but the success of LSU receivers in the NFL speaks to their athletic ability and they’re coming from a pro-style offense,” said Rob Rang, NFL draft analyst for NFLDraftScout.com. “They’re not just pass-catchers. They can block down the field. They have the physicality. They know how to get off of press coverage. I want to see DJ Chark catch the ball cleanly all this week. If he does, he’s got the chance to be the first receiver selected from the Senior Bowl this year.”

MOBILE, Ala. — Most players invited to the Senior Bowl all share at least one quality: They were starters in college.

He’s off to a good start, and it began with Tuesday morning’s weigh-in.

“He measured in well,” Rang said. “Some of the other highly regarded receivers did not measure in quite as well today.”

Oklahoma State receiver Marcel Ateman is the only wideout in front of Chark in Walter Football’s rankings of the top-10 receiver prospects in the 2018 draft. Chark is 10th. The sites’s top six wideouts are underclassmen.

Later on, he showed his physical skills and balance on a reception against Kelly, hauling in a pass after the cornerback bumped him off his route.

“Everybody here are good, top players at their position,” Chark said. “You’ve got to make plays.”

“I think here the thing for him is to show the comprehension of the full route tree,” Savage said. “He’s going to have some quarterbacks who can get him the football. It’s going to be a nice little breakout week for him, perhaps.”

ALEXANDRIA — Midway through his run, Shirdetra Chark lost the ability to speak.

He’s not necessarily restricted to offense, either. Chark, LSU’s punt returner last season, practiced on special teams Tuesday. He took two for touchdowns as a senior, including a game-changing 75-yarder for a score in a win over Auburn.

He’s versatile on offense, too, he says, having spent time at the wide receiver spot and at the inside slot position and he averaged 5.2 yards per rush on 12 jet sweep carries.

The one man closer to Chark than any, LSU receivers coach Mickey Joseph, has passed on a scouting report to his brother, Vance Joseph, the Denver Broncos head coach who is leading the North team this week.

“(Mickey) loves him as a punt returner, as a receiver,” Vance Joseph said Tuesday. “A guy in big moments that plays big. That’s important for a receiver that he didn’t shrink in big moments. The bigger the moment, the bigger he played. It’s going to be fun to watch him work this week.”

Rang calls this week huge for Chark, who had made zero receptions before his junior season. He was an unknown, even lightly recruited out of high school in 2014, until he put up that 17.9-yard average per catch in 2016.

The success was such that he seriously debated bypassing his junior season for the draft. Realistically, he said, projections for him last January ranged from fourth to sixth round. And now?

“Day 2, pretty much,” Chark said. “That’s what I hear. NFL draft is a tricky thing. Could be projected Day 1 and go Day 3. I try not to pay attention to it.

“I felt like coming back really helped me out,” he continued. “I also wanted the challenge of being the go-to guy, seeing the coverages rotated to me at times instead of being the No.3 where I was able to piggyback off of Travin (Dural) and Malachi (Dupre).”

LSU officially announced the hiring of former running back Kevin Faulk as the director of player development.

On the record: former LSU WR DJ Chark on the 2018 Tigers under a new OC, Matt Canada’s tenure and LSU’s future return man