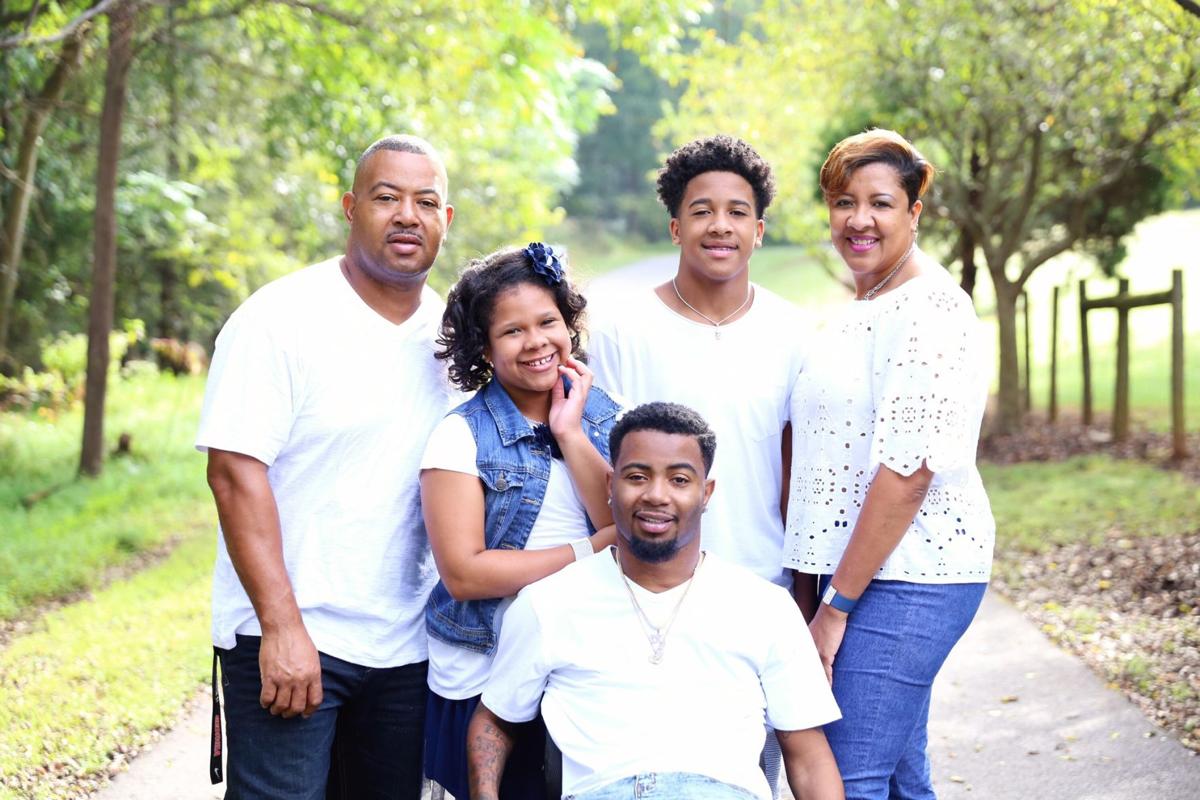 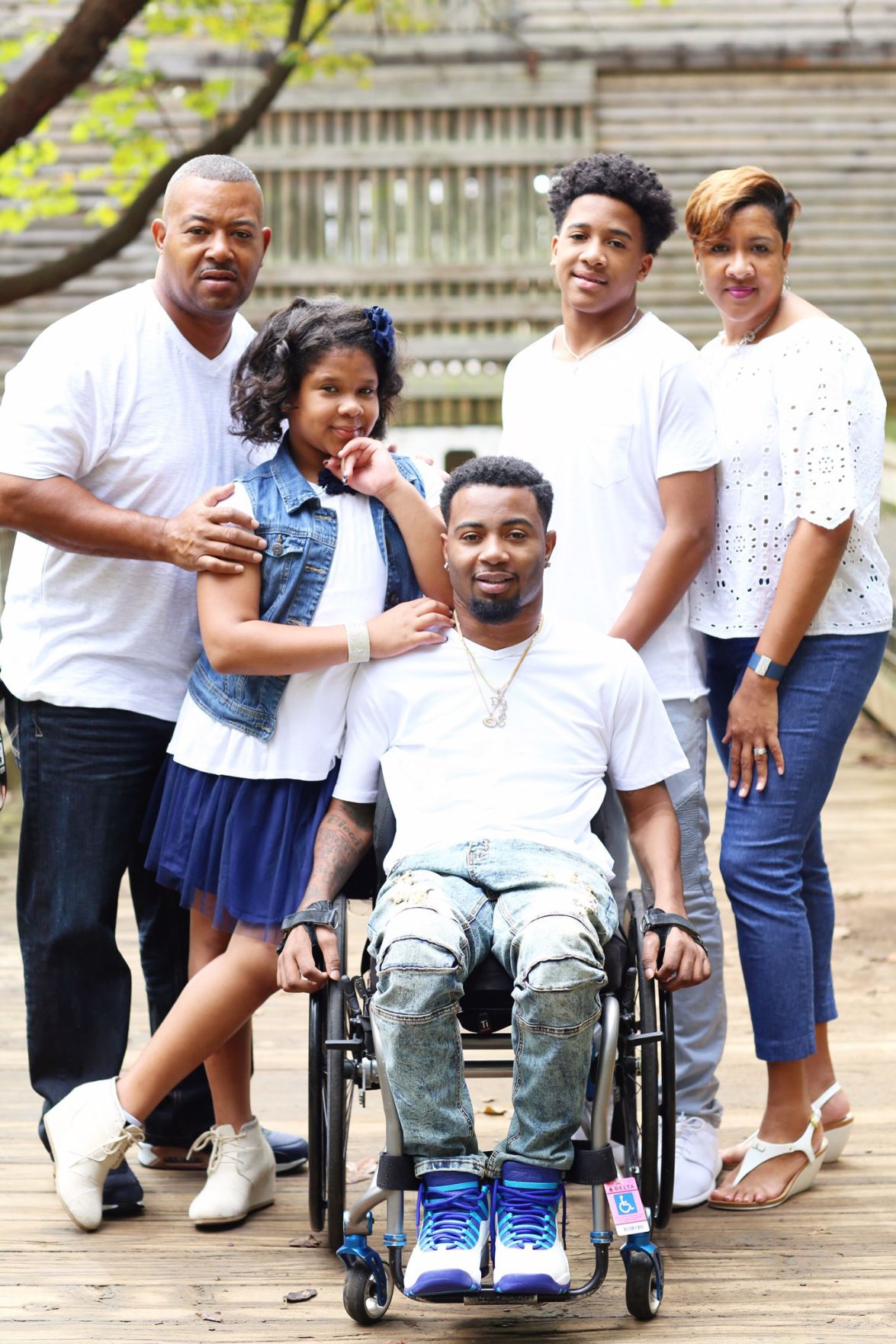 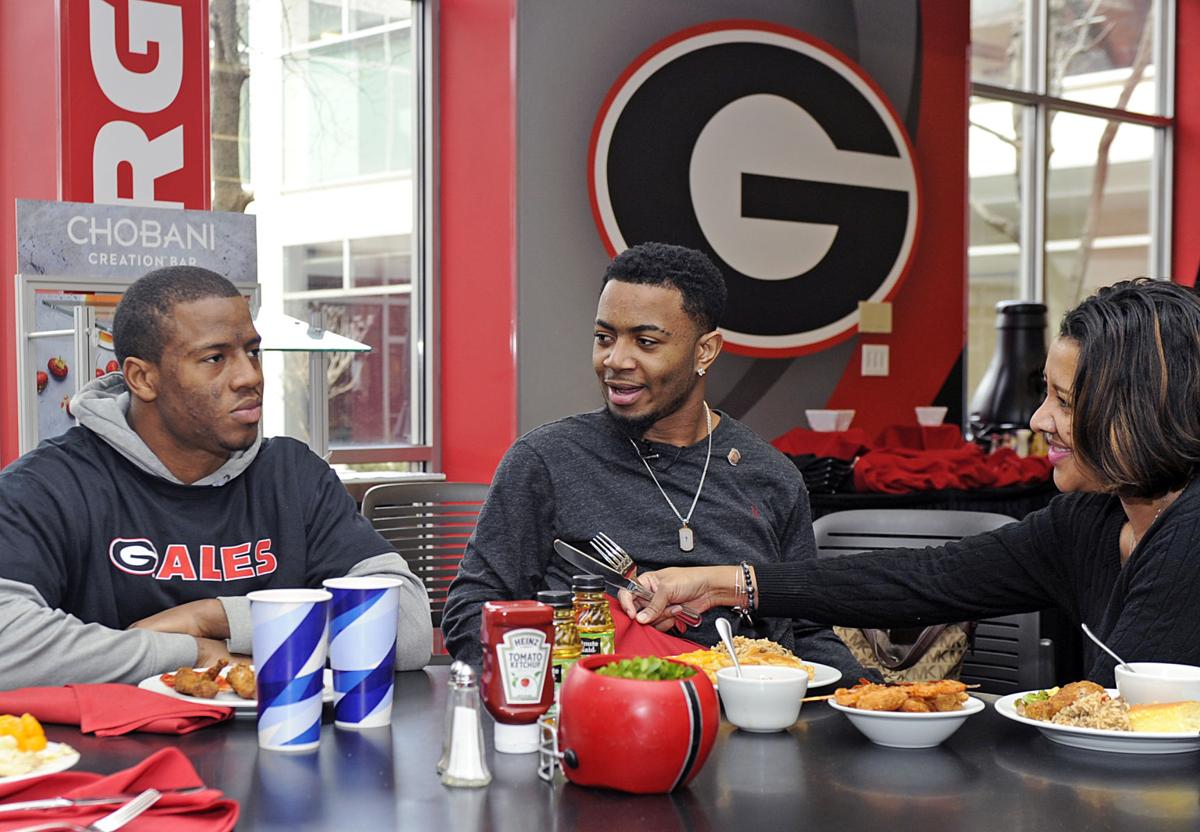 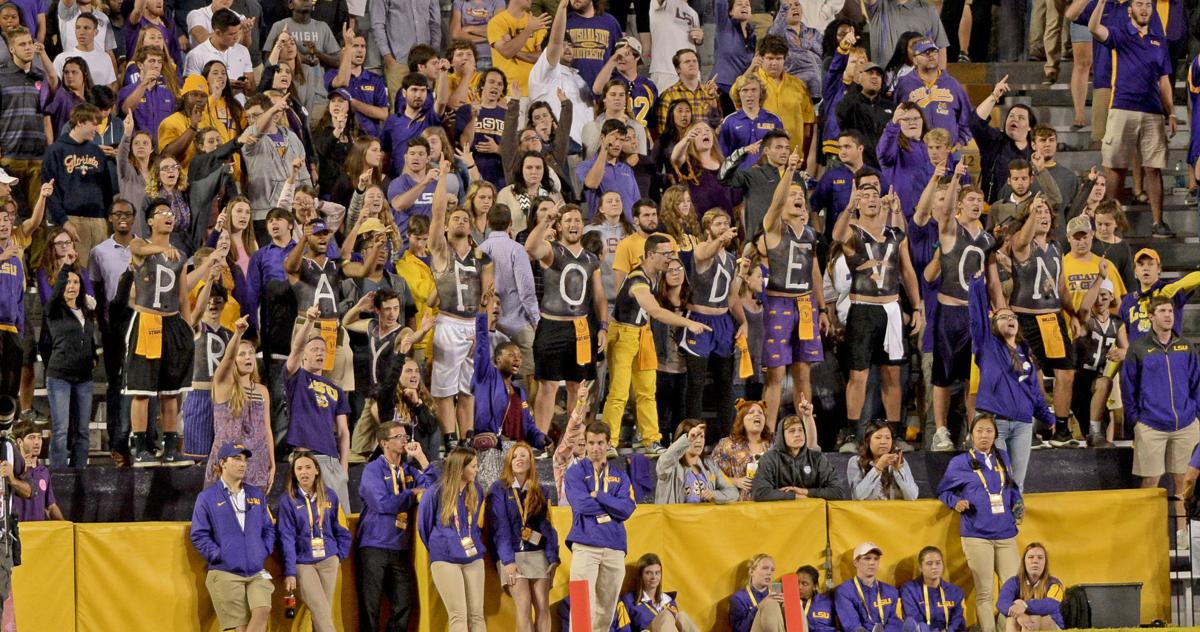 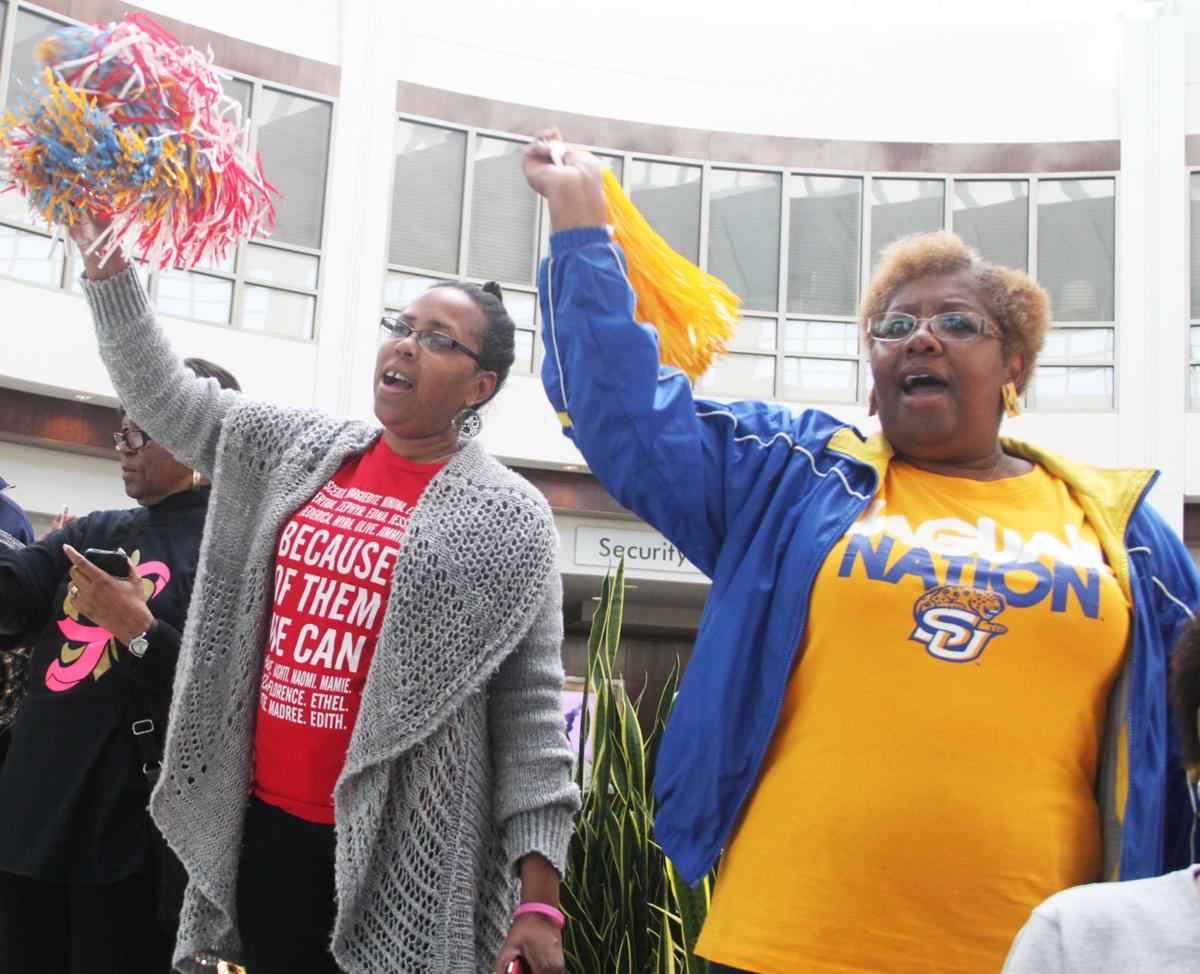 Advocate staff photo by APRIL BUFFINGTON -- Janice Adolph, right and Bridget McGee celebrate as they wait the arrival of Devon Gales at the Baton Rouge Metropolitan Airport on Saturday, March 5. 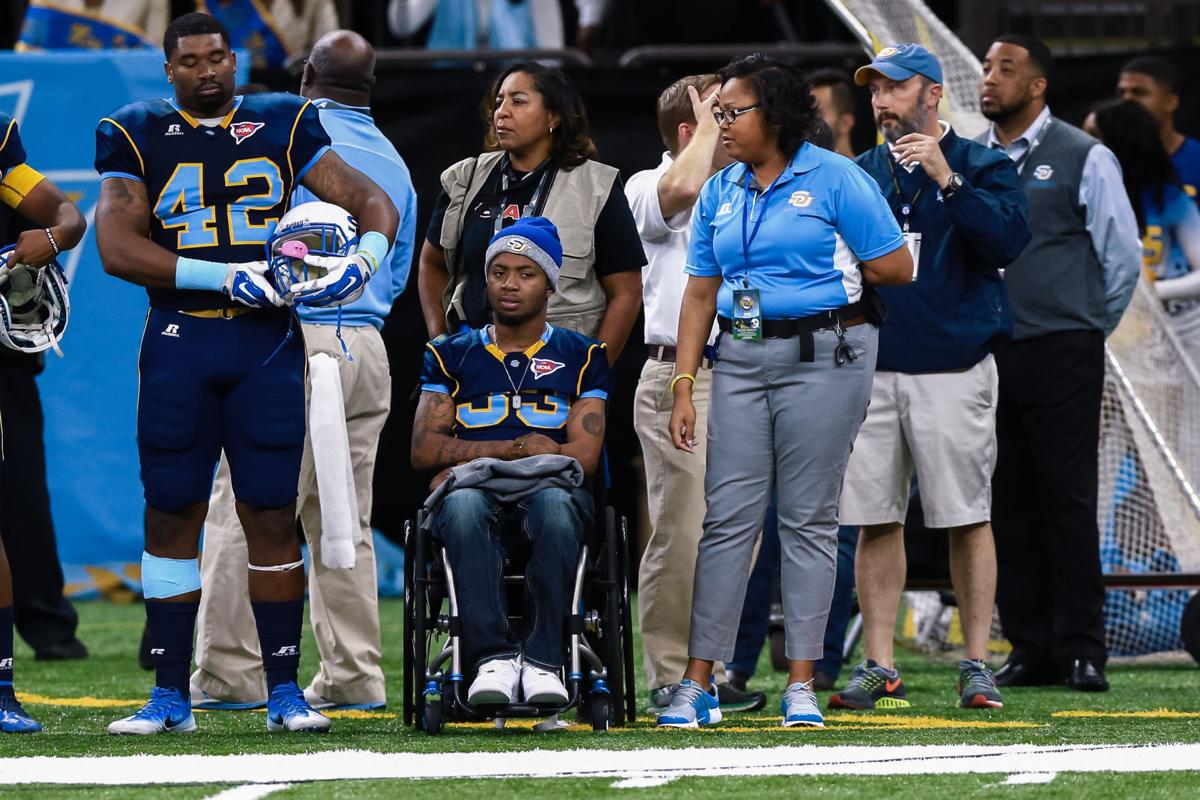 Advocate staff photo by APRIL BUFFINGTON -- Janice Adolph, right and Bridget McGee celebrate as they wait the arrival of Devon Gales at the Baton Rouge Metropolitan Airport on Saturday, March 5.

The first words Devon Gales wrote were his name.

Aided by adaptive equipment, the former Southern University wide receiver pushed his arm to form the letters that were removed from a lineup too soon.

It had been nearly three years since the Baton Rouge native suffered a devastating hit while his team returned a kickoff during a 2015 game at the University of Georgia that paralyzed him from the neck down.

The ability to write was a sign of substantial progress.

Soon after, Gales was signing autographs for pleading kids at the Shepherd Center — a rehabilitation center in Atlanta where most of his family now lives — and Georgia's Sanford Stadium.

He has signed his name on programs, T-shirts, anything, finishing off the signature by drawing his jersey No. 33.

Gales’ upper body strength has steadily improved; he's now able to climb into and out of a car. He’ll do that Saturday, when he returns home to be recognized at Tiger Stadium before No. 13 LSU’s game against No. 2 Georgia — along with the sports medicine staffs that helped him recover the abilities he has today.

“I’m grateful just to have something coming back,” said Gales, 24, who graduated from Central High in 2013. “Just to know there is still a chance that I’m going to be able to walk again.”

Gales has become part of the Georgia community, which has supported him ever since his injury occurred.

Last year, Marshall Morgan, the kicker whom Gales collided with, invited Gales to his wedding. Morgan and his wife are expecting their first child, Gales said, and they’ve asked him to be the child’s godfather.

A university campaign to build the Gales family a new disability-accessible home has raised over $250,000, and football coach Kirby Smart and his wife, Mary Beth, donated $10,000 from their family foundation. In July, former Georgia linebacker Whit Marshall, the CEO of a building company, donated a one-acre plot in Atlanta where the house will be built.

The search for where to build a new, accessible family home for paralyzed former Southern University receiver Devon Gales ended with a surpris…

The foundation has already been laid, Gales said, and construction on the framework begins next week. The house is expected to be completed next summer. For now, family members are renting a house in Gwinnett County, anticipating the day they’ll gain additional comforts, like the electric lift track that will run from Gales’ bedroom to the rest of the house.

“It’s just a feeling that I can’t describe,” said Gales’ mother, Tanisha, who devotes her time to taking care of her son. “It’s been a long time coming. Once it’s finally here? It’s an overwhelming feeling. Time, money, supplies — all of these things to make this dream come true for us.”

Ray Castle, an LSU professor and director of the university’s educational athletic training program, wanted to ensure the Louisiana community properly thanked Georgia for the way it embraced Gales and his family.

Castle knew Georgia was scheduled to play LSU, and he worked with university officials to invite Gales, his family and other Georgia officials to be recognized before kickoff.

“What better way to show that?” Castle said. “It’s an opportunity to thank them for taking care of a Louisiana native and local athlete in a time of need.”

Lovie Tabron will be one of those recognized. The former sports medicine assistant at Southern was 10 days on the job when Gales was removed from the Georgia game on a stretcher.

When Tabron arrived at the hospital, she said “the lobby was full of support to see what they could do.” Coaches and their wives huddled together with hospital administrators. She said former Georgia coach Mark Richt approached Gales and told him: “We’re going to help you in any way we can.”

The relationship between former Southern football player Devon Gales and the University of Georgia added another chapter this past weekend.

Georgia officials helped enroll Gales into a rehabilitation program at the Shepherd Center, which Tabron said “is literally Disney World for handicapped patients.” The center has a gym for wheelchair basketball, she said, with mats for adaptive exercises and weightlifting machinery “for whatever your level of function is.”

Tabron visited Gales monthly, and by 2017, Gales was taking dozens of steps with the aid of equipment and athletic trainers. Now, Tabron said, Gales has regained enough upper body mobility to do 100 pushups a day, feed himself and rapidly send out text messages.

“It’s been wonderful,” Tanisha said. “From going to a point where we didn’t know whether the doctors know for sure. It was 50-50, and we just stick toward that positive 50. We look at each day like it’s going to happen. A small victory is the same as a large victory for us.”

Tanisha, a former teacher at Central High, moved to Atlanta with Gales’ brother Dalen, 14, and sister Teah, 10, to take care of Gales. Gales’ father, Donny, is working at a shipping company in Baton Rouge until he can get a work transfer to join his family.

Tanisha said she’s “had to switch from mom to head of the household” — a transition that would have been more difficult were it not for Bryant Gantt, the player programs director at Georgia.

Gantt checks in with the family weekly. He cuts their grass and changes the oil in their car. On Wednesdays, Gantt visits Gales at therapy, and they always try to catch a movie on Netflix. They last saw "Black Panther" together.

Gantt and Tabron are the most frequent visitors outside the family, along with Ron Courson, the director of sports medicine at Georgia, who hired Tabron in July 2017 to coordinate the athletic department’s new behavioral medicine program.

At that point, Tabron, who has a masters in sports psychology, was able to spend more time with Gales.

“It was a benefit to be around him, but it was also a benefit for me,” Tabron said. “His positivity is such a blessing in my life — celebrating his victories and watching him grow.”

It wasn’t until a few months ago, she said, that Gales’ positivity began to waver.

“It just started to set in: This is who I am,” Tabron said. “Life is not the same for him. He is a 24-year-old man that spends most of his time with his family. It’s different. Not where you see your life at that age.”

They came up with a code for when they are apart.

If Gales needs to talk, he’ll text Tabron a number — any number — and she’ll step away and have a phone call with him.

Gales’ experiences are influencing the world of sports medicine.

In every summer since 2016, LSU, Georgia and Southern have co-hosted a free, one-day emergency-care seminar at Tiger Stadium. Over 150 medical practitioners have attended each year, Castle said. Titled the Emergency Care Course, the seminar has 12 lectures and 12 hands-on labs that cover how to handle critical injuries and other medical emergencies.

Gales has attended every summer, and starting in 2017, the course began honoring practitioners with the Gales Quality of Life Award, which is given to a person or organization whose “dedicated service and outstanding contributions” improved the “quality of life through health and safety of student athletes,” according to LSU’s website.

The course is growing, Castle said, and it might soon be expanded across the country.

And on Saturday afternoon, gratitude will be shared across Tiger Stadium.

“I appreciate everything they’re doing for me,” Gales said. “I would like to send my blessings out to them and ask for their continued support.”

Georgia vs. LSU live updates: What Ed Orgeron had to say after upset win over Bulldogs

LSU and Georgia face off in Death Valley ... need we say more? Find live updates below.