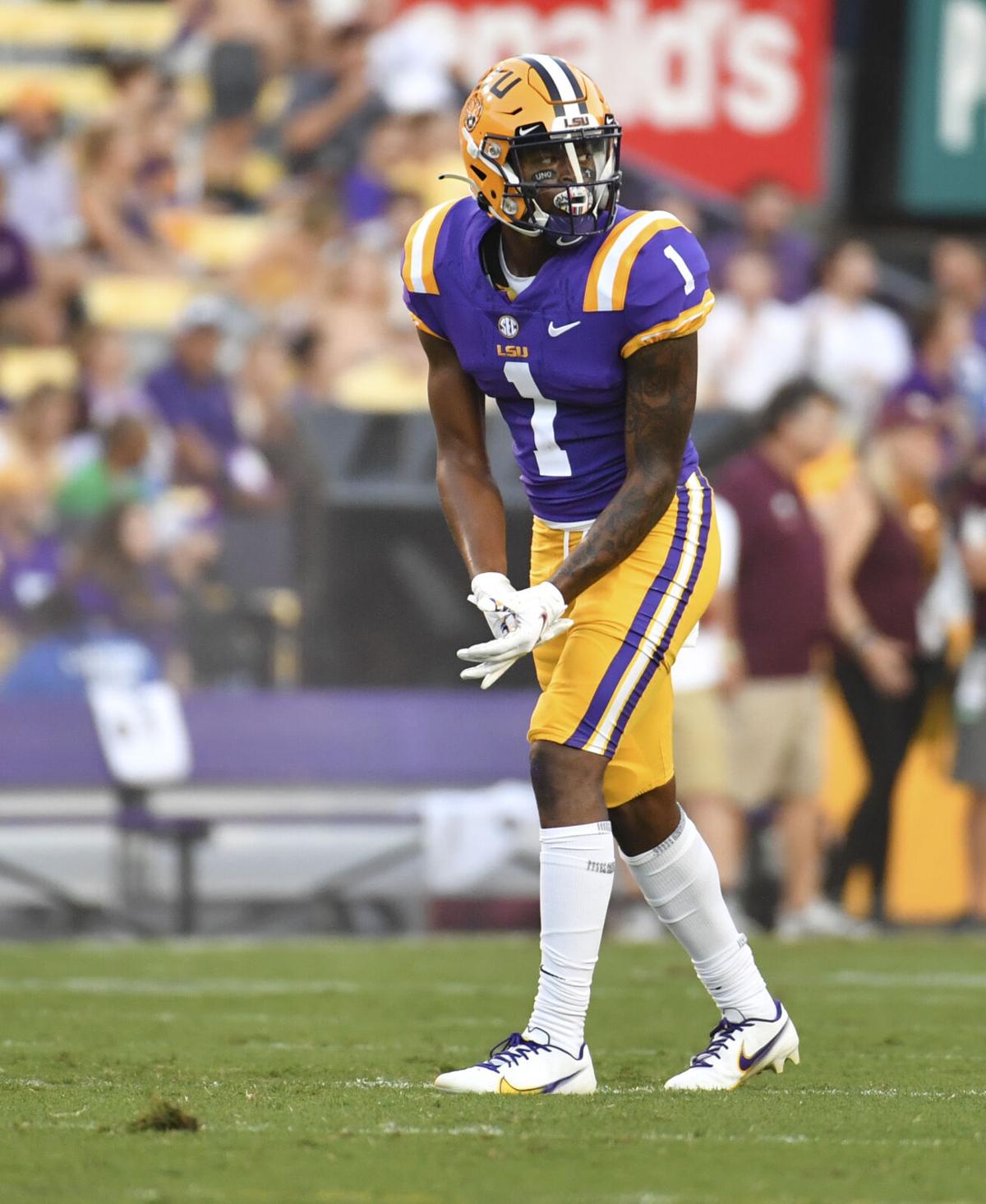 LSU wide receiver Kayshon Boutte (1) stands at the line in the first half against Central Michigan, Saturday, September 18, 2021, at Tiger Stadium on the campus of LSU in Baton Rouge, La. 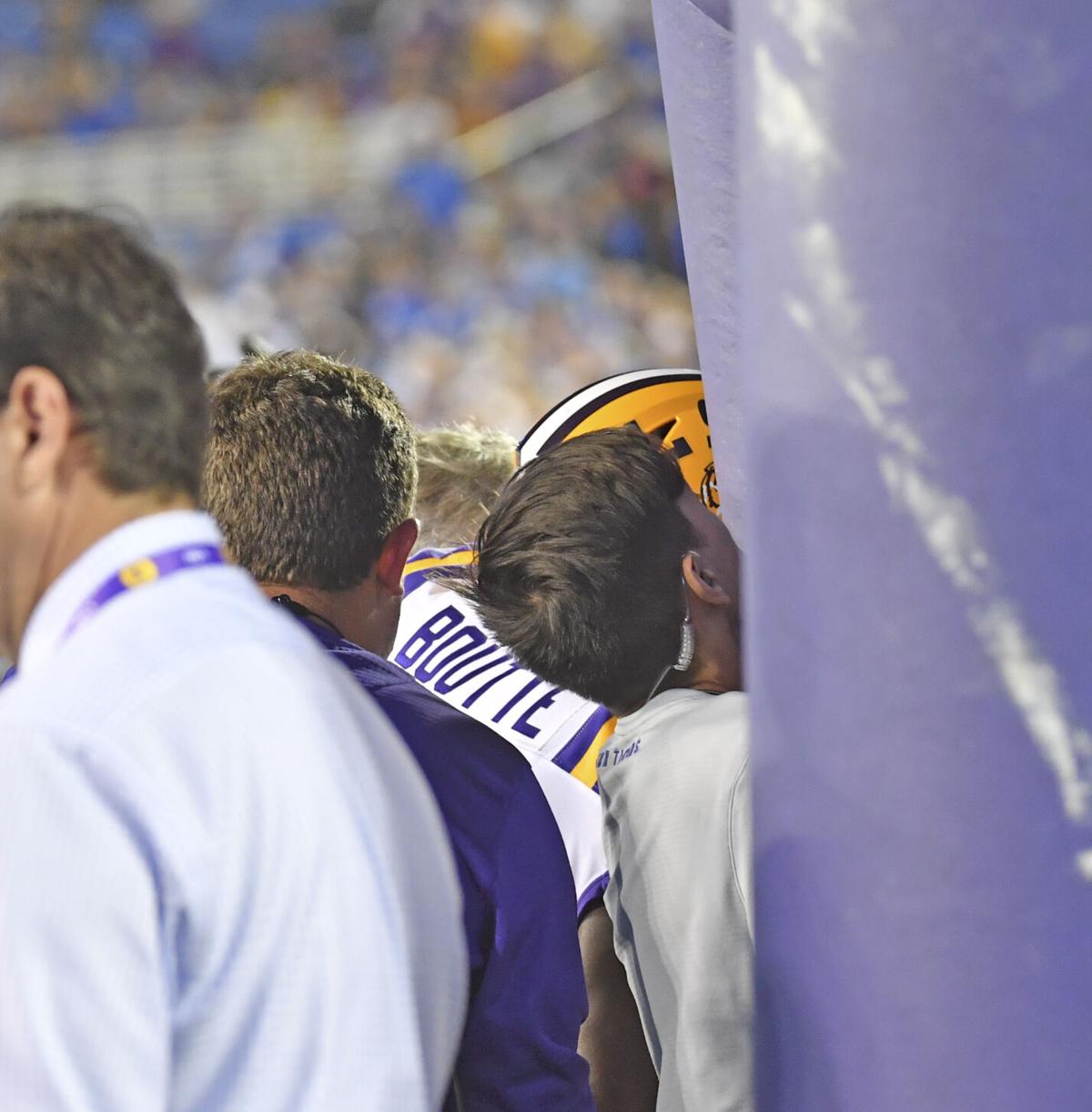 Team personnel check on LSU wide receiver Kayshon Boutte after he went down with an apparent injury in the second half of the Wildcats' 42-21 win over the Tigers, Saturday, October 9, 2021, at Kroger Field on the campus of the University of Kentucky in Lexington, Ky.

LSU wide receiver Kayshon Boutte (1) stands at the line in the first half against Central Michigan, Saturday, September 18, 2021, at Tiger Stadium on the campus of LSU in Baton Rouge, La.

Team personnel check on LSU wide receiver Kayshon Boutte after he went down with an apparent injury in the second half of the Wildcats' 42-21 win over the Tigers, Saturday, October 9, 2021, at Kroger Field on the campus of the University of Kentucky in Lexington, Ky.

After what ended up being the last play of his sophomore year, Kayshon Boutte rode off the field Saturday night on a cart. His head was covered by a towel. An assistant coach stopped to comfort him.

Boutte had made an acrobatic catch along the sideline in the fourth quarter of LSU’s loss to Kentucky. When he landed, he writhed on the ground as athletic trainers rushed to his side. They examined his lower right leg then brought him into a medical tent.

One of the best wide receivers in college football had suffered a season-ending right ankle injury, coach Ed Orgeron confirmed Monday afternoon. The injury dealt another blow to an LSU team riddled with unavailable players in the midst of an important stretch and ended the sophomore year of a rising star.

Boutte’s father, Embrick, described the injury as nothing “major,” saying Boutte didn’t break any bones or tear the Achilles tendon. But Boutte will need a procedure Tuesday morning, his father said, and with the time frame needed to heal, he won’t be able to play again by the end of the year.

LSU star wide receiver Kayshon Boutte out for the season

After emerging as one of the top wide receivers in the Southeastern Conference near the end of his freshman year, Boutte had become arguably the best receiver in the country. He finished the season with 38 receptions for 509 yards and nine touchdowns, which tied for the most in the Football Bowl Subdivision at the time of his injury.

Clearly LSU’s top offensive target, Boutte was used in a variety of ways. He caught bubble screens and shovel passes as an extension of the running game. He lined up in the slot to take advantage of nickel safeties or linebackers. He beat cornerbacks in man coverage on the outside.

Teams rarely had success covering Boutte, and he caught a touchdown in seven straight games dating back to last season, tying him with Jarvis Landry and Dwayne Bowe for the longest streak in LSU history. Though he caught eight passes for 73 yards, Boutte’s touchdown streak ended against Kentucky.

“He felt like he hadn’t hit his full stride yet,” Boutte’s father said.

Boutte will leave a void difficult to fill over the next six games, beginning with No. 20 Florida this weekend. Though LSU has a deep group of wide receivers, all of them complemented Boutte the first half of the season. Statistically, the next-closest player is freshman hybrid tight end Jack Bech, who has 272 yards and one touchdown.

Pretty soon, LSU will have its first afternoon game this season.

Then there’s speedy junior Trey Palmer, who has two touchdowns this season, and veterans Jontre Kirklin and Jaray Jenkins. Orgeron also mentioned junior Devonta Lee, who has six catches, as an option. But the group’s depth will get tested.

“It’s not about No. 1 roles. It’s about someone coming up and making some plays,” Orgeron said. “I think all those guys have to step up, not just one guy.”

They’ll have to emerge within an offense still trying to click three games into the SEC schedule. The Tigers haven’t scored more than 30 points against another Power Five conference team this year, and now they’ll host a team with the No. 15 scoring defense in the country. Florida has allowed 16.5 points per game.

Film review: The issues, stats and players that explained LSU's loss to Kentucky

Every week, we re-watch LSU's game to figure out what went right or wrong, determine three players of the game and choose three defining stats. Not much went well against Kentucky.

Though senior defensive tackle Glen Logan will return this week from a broken foot and the starting offensive line finally regained its health, the team has many other injuries, particularly on the defensive side. Orgeron said safety Major Burns and defensive tackle Joseph Evans will miss their second straight game, and senior defensive end Ali Gaye won’t play against Florida.

The absences add to the daunting nature of LSU’s upcoming games. The Tigers have lost two straight. They’ve never dropped three in a row under Orgeron. But they’ll face No. 20 Florida then travel to No. 13 Ole Miss before the open date, continuing a string of ranked opponents, and LSU hasn’t beaten a ranked team this season.

Orgeron has faced a similar situation before. Last season, LSU lost back-to-back games before it played Florida. The Tigers traveled with 54 available scholarship players because of injuries and opt-outs, then they upset the Gators in a game filled with fog and a thrown shoe.

Facing increasing pressure and questions about his job security, Orgeron needs another upset. LSU opened as a 10-point underdog at home, according to Caesars Sportsbook.

But it will have to play without Boutte and many others.

Joe Burrow OK, back with Bengals who now move on after OT loss to Packers