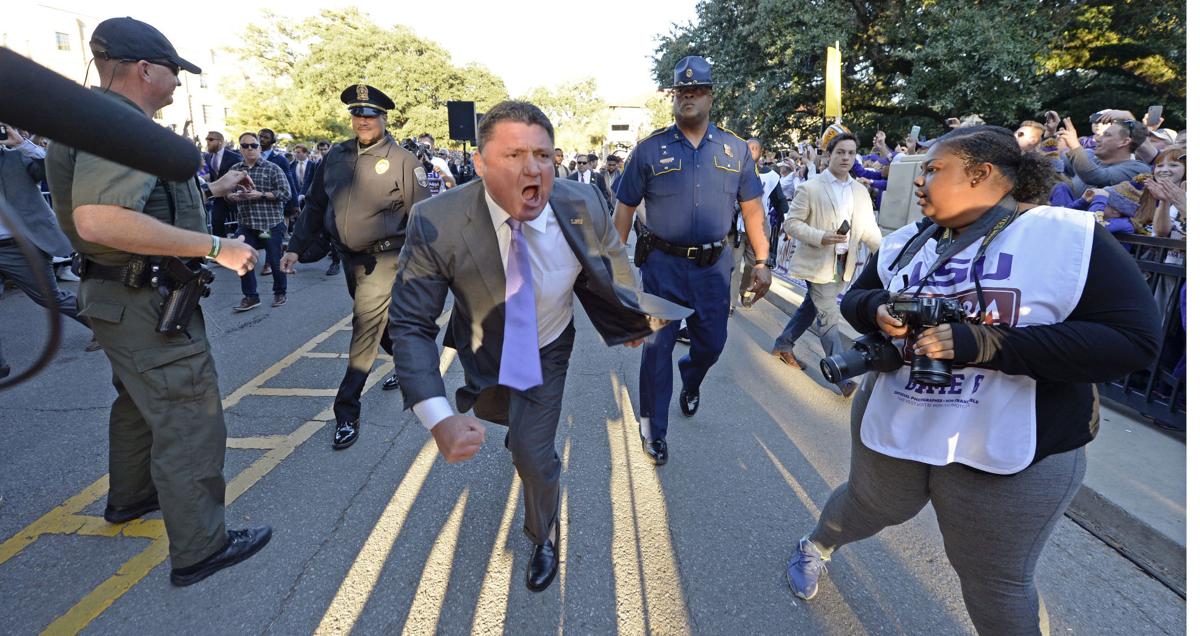 LSU head coach Ed Orgeron is fired up while acknowledging the fans as the LSU team comes down Victory Hill before LSU's game against Alabama in Tiger Stadium Saturday Saturday Nov. 3, 2018, in Baton Rouge, La. 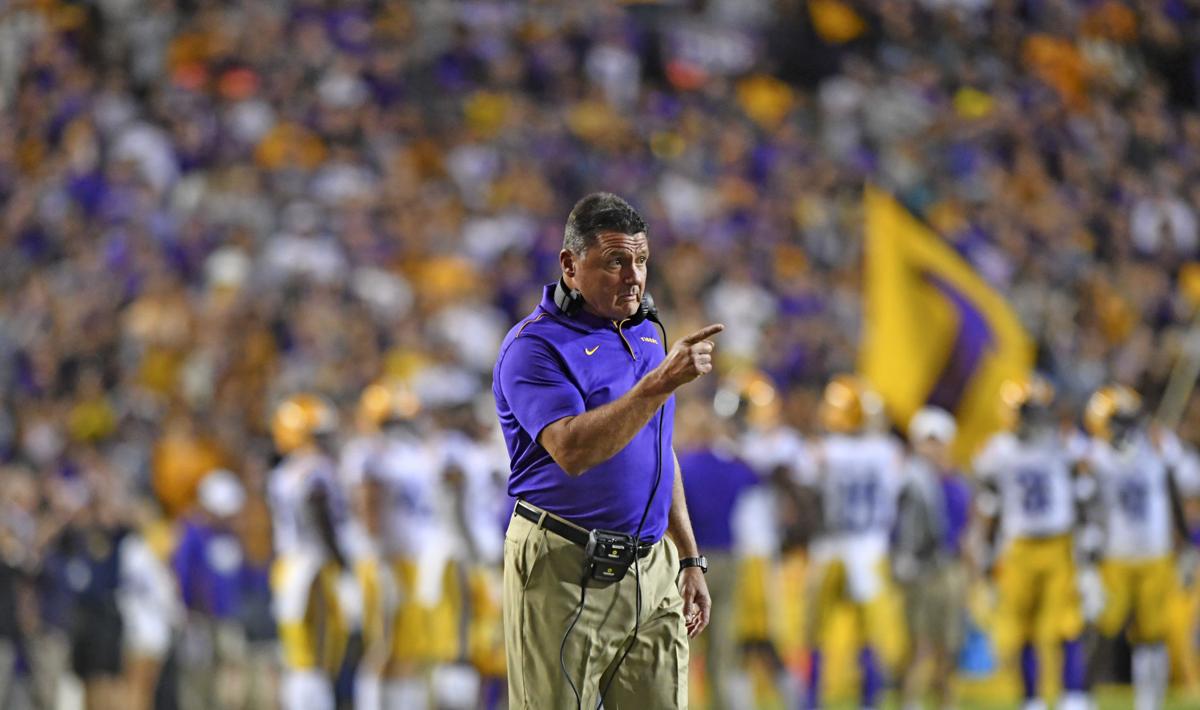 LSU head coach Ed Orgeron coaches in the first half between the Tigers and the Gators, Saturday, October 12, 2019, at LSU's Tiger Stadium in Baton Rouge, La.

LSU head coach Ed Orgeron is fired up while acknowledging the fans as the LSU team comes down Victory Hill before LSU's game against Alabama in Tiger Stadium Saturday Saturday Nov. 3, 2018, in Baton Rouge, La.

LSU head coach Ed Orgeron coaches in the first half between the Tigers and the Gators, Saturday, October 12, 2019, at LSU's Tiger Stadium in Baton Rouge, La.

During Ed Orgeron’s first full season as LSU’s head coach in 2017, the players waited inside their team hotel near Ole Miss. They had a meeting scheduled an hour before they left for the stadium.

Orgeron called out names on the depth chart during the weekly session, and the backups had to say their name after the starters, ensuring players understood their roles. Orgeron always entered the meeting trying to energize his team.

This time, Orgeron ran into the room, ripped off his shirt and grabbed two cans of Red Bull. He slammed them together above his head and poured the caffeinated liquid into his mouth.

Energy drinks continue to fuel Orgeron and the LSU coaching staff. They drink Red Bull, Monster and Reign. Some coaches don’t touch the drinks; others limit their consumption. The strength and conditioning staff keeps a minifridge stocked with energy drinks in their office near the weight room.

“Those are for the strength coaches,” junior right tackle Austin Deculus said. “We can't have those.”

'For all of us': What a national championship would mean to LSU, Ed Orgeron -- and Louisiana

LAROSE — Tom Guidry pointed out directions from the passenger seat as the car swerved along Bayou Lafourche, passing parked boats and bridges …

Coaches have sipped energy drinks throughout the facility this season as they led LSU to the College Football Playoff National Championship on Monday night. The offensive staff keeps Monster inside a minifridge, and players have watched the strength coaches stack the empty cans until they crash to the ground. During pregame warmups at Mississippi State earlier this season, one of LSU’s coaches sipped from a can of Reign.

“They have them in their film room,” sophomore wide receiver Ja’Marr Chase said. “Every room they have, there's energy drinks everywhere, even in their cafeteria. You open the fridge, you see nothing but water and energy drinks.”

“They'll pop a can of Red Bull energy drink like it ain't nothing,” Lewis said during the national championship media day. “They be fired up everywhere they go. You can look in the coach's eye and see they ready.”

Lewis pointed toward Orgeron, who sat behind a raised podium in the center of the room.

LSU's offensive linemen struggled last season. The players took responsibility, and this year, they have anchored the highest-scoring offense in college football.

Orgeron guzzled the drinks when he arrived at LSU. During an appearance on Dan Le Batard’s radio show in May 2017, six months after LSU hired him as its full-time coach, Orgeron said he sometimes consumed eight to 10 energy drinks per day.

“Ed,” Le Batard said, “your face is going to explode.”

“Yeah, look,” Orgeron said, “If we’re going to do something here at LSU, we do it full speed, my man.”

LSU and Clemson fans flood the French Quarter Sunday, Jan. 12, 2020, in advance of the college football playoff championship on Monday at the …

Two months later, Orgeron was asked if he still drinks that many energy drinks per day.

“I don't do that anymore,” Orgeron said. “I've curtailed my energy-drink drinking.”

In some ways, Orgeron has mellowed during his career. He learned to give his assistant coaches more autonomy, reduced the amount of time his teams practice and treated players like his sons. The Tigers love him. He doesn’t pound energy drinks as much as he used to, LSU’s players said, but he still drinks them.

Steve Ensminger sat at the podium and solemnly surveyed the reporters he hadn't seen for some time.

Those on the coaching staff who like energy drinks use them to stay awake. The cans mix carbonated water, sugar and caffeine. Though high levels of caffeine can create headaches, tremors and heart palpitations, among other side effects, the drinks have worked for LSU.

“They used to (have energy drinks) a lot more until we had a nutritionist or a doctor come in and tell us drinking six energy drinks a day was not good for your heart,” junior punter Zach Von Rosenberg said. “I'm pretty sure they dialed it back a little bit after that. Game day, they're going to do whatever to stay fired up.”

However it ends, the great LSU Tigers versus Clemson Tigers cat fight, which takes place Monday at 7, appeared Sunday to be a good thing for t…

“I don't know if coach Steve (Ensminger) is drinking them right now,” Chase said before the Peach Bowl, “but he's probably drinking it later.”

After LSU beat Alabama in early November, snapping an eight-game losing streak to the Crimson Tide, Orgeron alluded to the energy drinks.

“I'm so happy for the team right there, the coaching staff and the state of Louisiana,” Orgeron said. “I might be able to go into the 7-Eleven now and get a Monster or a Red Bull and they won't have to tell me, 'Coach O, you got to beat those guys.' I'll tell them I beat them.”

The 'turning point in our program': Ed Orgeron says it was LSU's upset loss to Troy

The moment is nearly here for Ed Orgeron and the LSU Tigers, a moment filled with obstacles that once made it seem like it would never arrive.

Since Orgeron took over as the interim coach, LSU has gone 38-9, its win total increasing every season. Orgeron has assembled a team on the cusp of winning its first national championship since 2007, and if LSU beats Clemson, this season may be considered the greatest in school history.

The players understand why their coaches use the energy drinks. Junior safety Grant Delpit guessed he would need them if he coached. He called them “jet fuel.” The players also appreciate and enjoy how Orgeron boosts their emotions on game day, however he gains the necessary energy.

“It's motivation knowing the way you feel about the game going into it, your head coach feels the same way,” junior left tackle Saahdiq Charles said. “Fired up and ready to go hit somebody in the mouth.”

And on Saturday morning, two days before LSU played for the national championship, Orgeron was asked if he had any pregame rituals.

“I get fired up,” Orgeron said. “I drink a couple Monsters and Red Bulls.”

Watch: They let (a) band play NECK on Bourbon Street — and it was quite a sight

A band played 'neck' and Bourbon Street joined in singing a vulgar, five-word chant that LSU fans will know.