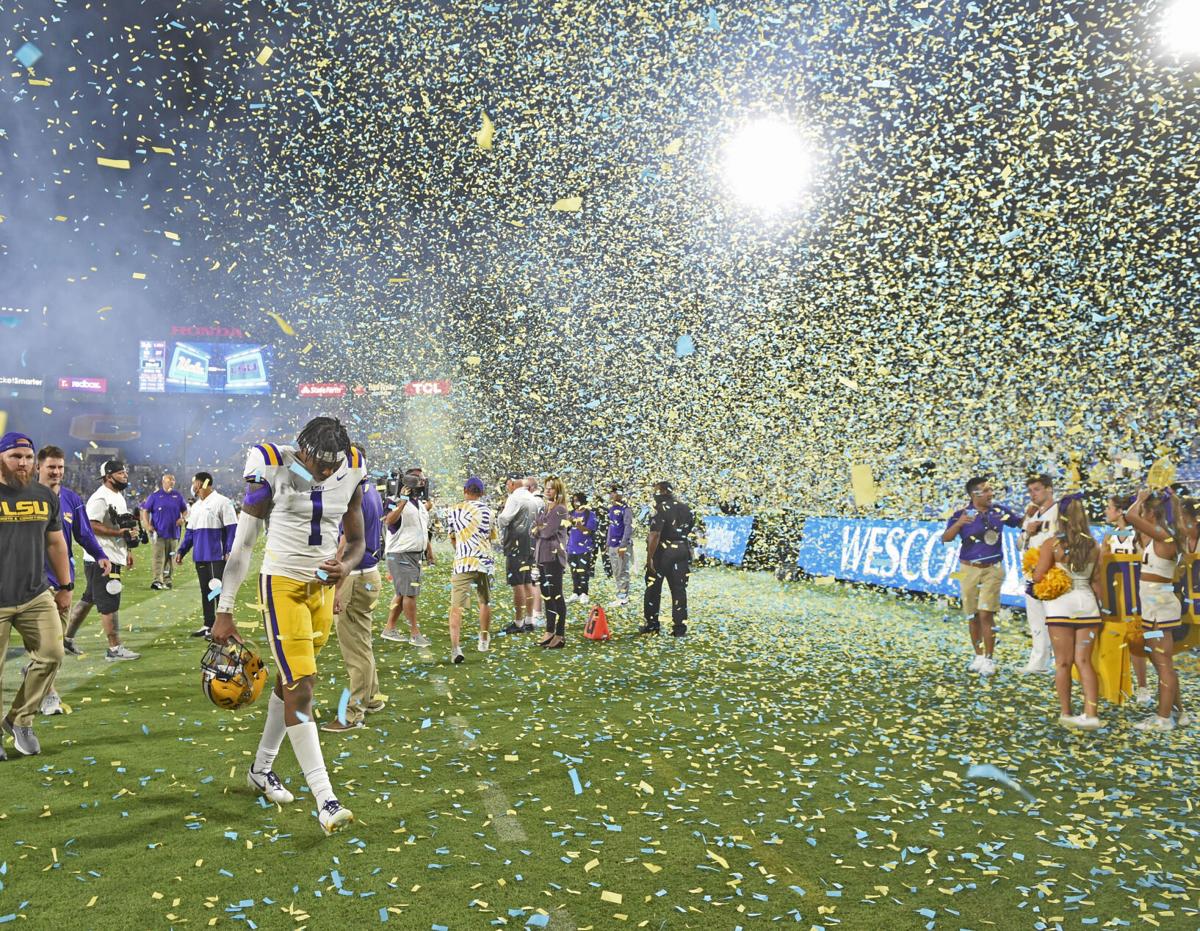 LSU cornerback Eli Ricks (1) walks off the field following the Bruins' 38-27 win over the Tigers, Saturday, September 4, 2021, at The Rose Bowl in Pasadena, Cali. 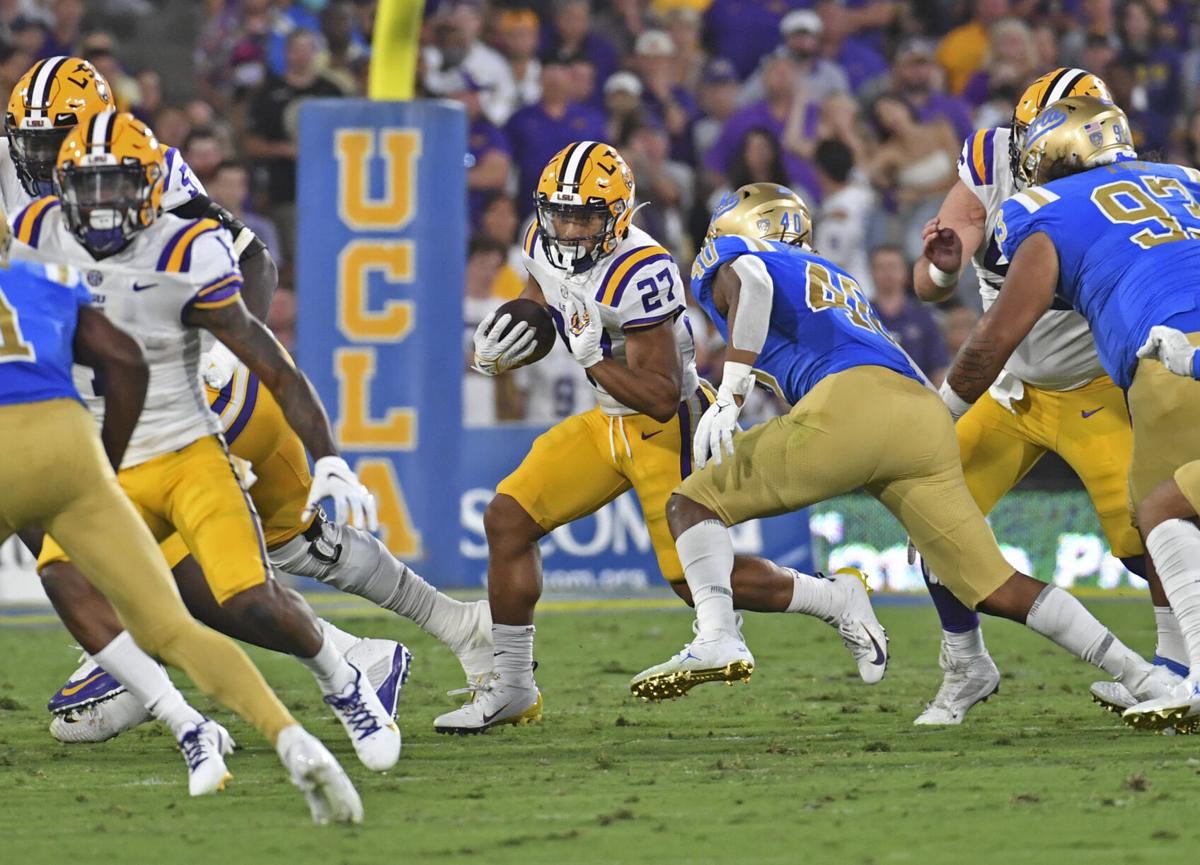 LSU running back Josh Williams (27) runs the ball in the first half against UCLA, Saturday, September 4, 2021, at The Rose Bowl in Pasadena, Cali. 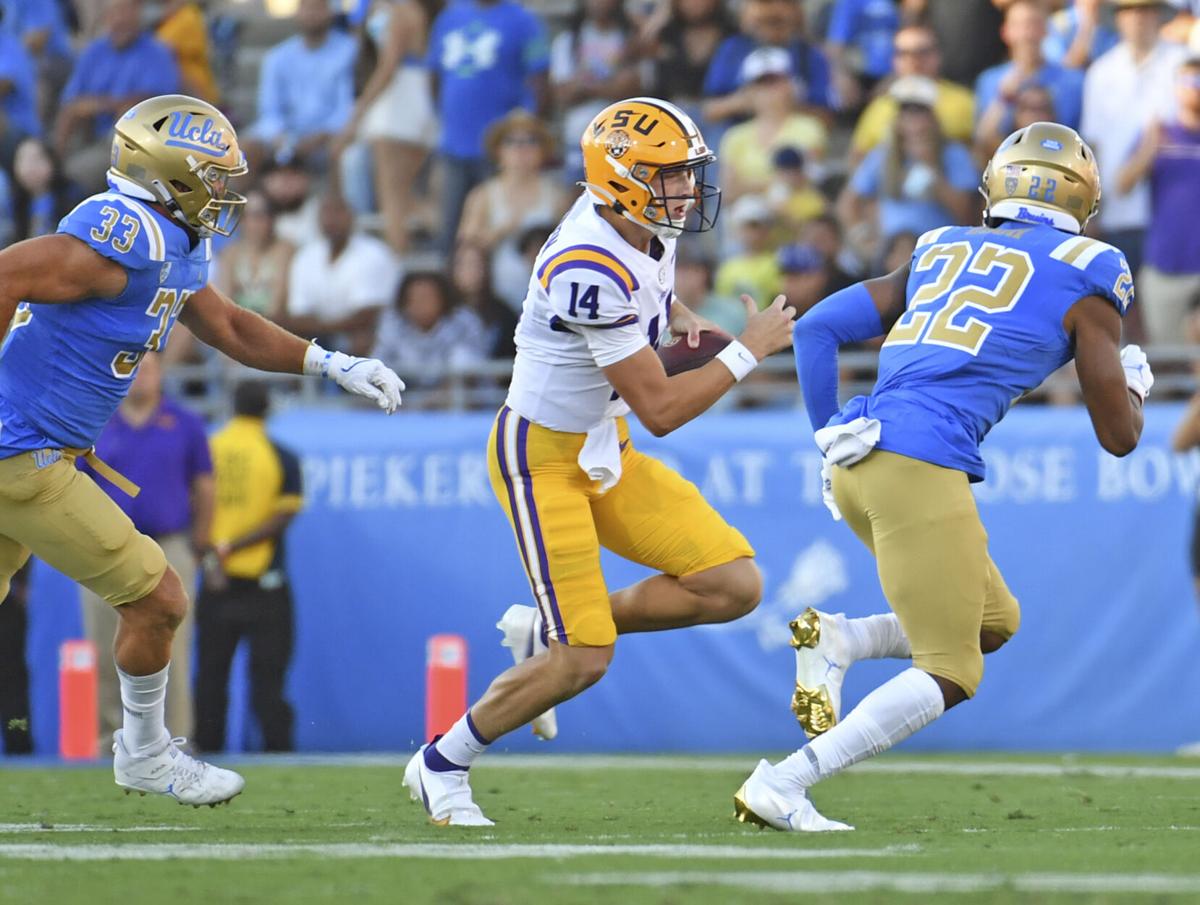 LSU quarterback Max Johnson (14) runs the ball out of bounds in the first half against UCLA, Saturday, September 4, 2021, at The Rose Bowl in Pasadena, Calif.

LSU cornerback Eli Ricks (1) walks off the field following the Bruins' 38-27 win over the Tigers, Saturday, September 4, 2021, at The Rose Bowl in Pasadena, Cali.

LSU running back Josh Williams (27) runs the ball in the first half against UCLA, Saturday, September 4, 2021, at The Rose Bowl in Pasadena, Cali.

LSU quarterback Max Johnson (14) runs the ball out of bounds in the first half against UCLA, Saturday, September 4, 2021, at The Rose Bowl in Pasadena, Calif.

PASADENA, Calif. — Perhaps one play can’t be described as a turning point in a game in which one team methodically pulled ahead of the other, but in many ways, an over-the-shoulder, no-look backward incomplete pass summarized LSU’s season-opening 38-27 loss to UCLA.

Late in the third quarter Saturday night, the Tigers still trailed by a touchdown. Sophomore quarterback Max Johnson dropped back on third down from inside the red zone. As it had all game, UCLA blitzed.

Multiple defenders broke through the line. Johnson retreated. He turned, saw the Bruins swarming him and tossed the ball with his back turned to the line of scrimmage. He jumped as he released the desperate heave. UCLA linebacker Carl Jones Jr. drove him into the Rose Bowl grass. The ball fell untouched.

Johnson stood up and left the field. LSU converted a field goal. The Tigers trailed by four then, still within striking distance of a comeback, but UCLA picked through No. 16 LSU’s defense on the next drive. The Bruins soon scored again, draining time and zapping the energy from the Tigers’ sideline.

This night could have inspired confidence as LSU tried to rebound from a 5-5 season and prove the program can return to national championship contention two years removed from its last title. Coach Ed Orgeron had hired six new assistant coaches during the offseason, including coordinators on both sides of the ball, to fix the poor communication, missed assignments and coverage busts that defined 2020.

Rabalais: Another season opener, another ugly picture for LSU as it falls 38-27 to UCLA

PASADENA, Calif. — As day melted into night and the San Gabriel Mountains rising behind the venerable old Rose Bowl disappeared from view, the…

During the preseason, the Tigers believed in their communication. They liked their playmakers on offense. They had depth along the defensive line. There were questions, but they entered the game optimistic and energized. Even Orgeron walked into the stadium jawing with a UCLA fan who initiated the exchange.

By the end of the night, the prospect of another title was replaced with frustration over recurring problems that now span two years. While LSU (0-1) may still complete a successful season, its opener ended as a dud.

“We didn’t perform like we’re supposed to at LSU,” Orgeron said. “It’s my responsibility. I told that to the team.”

LSU had arrived at this game under unusual circumstances. A week earlier, it loaded two trucks with equipment and evacuated within 24 hours as Hurricane Ida approached the coast. The Category 4 storm devastated southeast Louisiana, affecting families and leaving behind swaths of destruction.

The Tigers spent the next week practicing in Houston until they flew directly to Los Angeles. The team applied black Louisiana-shaped stickers on the backs of its helmets, conscious of the struggle so many people faced back home as it played a game.

“I’m gonna be honest,” Boutte said. “We got beat tonight. Beat up front. Beat all around. They outplayed us for 60 minutes.”

Many of the issues that plagued LSU last season continued against UCLA. The defense allowed 15 plays longer than 10 yards. The offensive line struggled to open running lanes. Orgeron thought LSU wasn’t “physical at the point of attack,” though he wanted to watch the film to make sure. LSU missed assignments, especially on crossing routes.

"Those things continue to haunt us and hurt us," Orgeron said. "Have to get them fixed.”

And then there were new problems, mostly caused by UCLA’s blitz packages. The Bruins (2-0) sent extra defenders throughout the game, as they had last weekend in 44-10 win against Hawaii. The pressure forced Johnson to make quick decisions and affected his timing with LSU’s receivers, though Boutte said they didn’t help by dropping passes. UCLA had five quarterback hurries and two sacks.

Johnson often recognized the defensive looks and used his hot reads, throwing toward the spaces abandoned by UCLA’s defenders. He threw a touchdown to Boutte for the game’s first score. But UCLA’s pressure eventually overwhelmed LSU, preventing any rhythm. Johnson finished 26 of 46 for 330 yards and three touchdowns with one interception.

“We hit him,” UCLA coach Chip Kelly said, “and he kept getting up.”

LSU had to put the offense on Johnson, who had won his previous two career starts, because the ground game generated little production. The Tigers never controlled the line of scrimmage, often pushed back by UCLA’s defensive front. They averaged 1.9 yards per carry and had 3 yards rushing at halftime. Orgeron said the running plays need to be more varied.

“UCLA did a good job of playing the run and being in the right spots,” Johnson said, “but we have to correct it as an offense, and that will be done.”

Three and out: Advocate columnist Scott Rabalais breaks down the LSU-UCLA contest

What we learned, what's trending and final thoughts from an ugly opener in the Rose Bowl.

Then LSU’s defense began allowing a string of explosive plays after a scoreless first quarter. On UCLA’s next play from scrimmage, quarterback Dorian Thompson-Robinson threw a 75-yard touchdown to tight end Greg Dulcich, who juked safety Major Burns along the way. No one had covered Dulcich on a crossing route.

The Bruins scored again on their next possession. They gained 146 yards over those six plays. They never trailed again.

LSU trailed by four after halftime and tried to re-establish the run on its first possession, bringing in freshman tackle Garrett Dellinger as an extra lineman to create more push. The first attempt by Tyrion Davis-Price gained 8 yards.

But six plays later, Johnson scrambled to his left as he tried to escape pressure once again. He wanted to dump off a pass to sophomore tight end Kole Taylor. Instead, he threw the ball directly to UCLA linebacker Caleb Johnson, who returned the ball inside the red zone.

“Throughout the game we started to pick it up as an offense,” Boutte said, “but I feel like if we had worked harder and faster to get going earlier in the game, it would have been a different ball game.””

Thompson-Robinson soon waited inside the pocket as a play developed. UCLA had motioned three players before the snap. Sophomore cornerback Eli Ricks tried to call a timeout. Not in time. One of UCLA’s receivers ran a crossing route amid the confusion. Thompson-Robinson threw the ball as soon as his receiver passed linebacker Navonteque Strong. Touchdown.

LSU's Ed Orgeron jaws with UCLA fan on his way into the Rose Bowl: 'Bring your a** on!'

LSU coach Ed Orgeron may be facing the pressure to deliver a successful season in 2021, but the Louisiana native appeared confident and relaxe…

UCLA continued to add to its lead. After Johnson’s desperate backward heave — a pass he said he tried to throw away — the Bruins scored touchdowns on their next two possessions. The second came on a 45-yard reception by wide receiver Kyle Phillips, who sprinted down the sideline and broke a tackle by All-American cornerback Derek Stingley Jr.

As Phillips and his teammates celebrated, Stingley slightly hunched over. He stood alone in the corner of the end zone, shocked he had missed the tackle and UCLA had stretched its lead even further. Though Boutte later scored for the third time, the game was out of reach with LSU plagued by all the fundamental issues that hurt the team so much last season.

The Tigers had entered this iconic venue for the first time hoping to announce their return to the top of college football. They left with their heads down as blue and yellow confetti burst over the sidelines, showering the LSU fans who trodded out after a disappointing opener.

"One game does not define a season, but we do understand that was a letdown for our fans and I take responsibility for it," Orgeron said. "We’ve got to get better.”