Associated Press file photo by DAVE WEAVER -- An NCAA baseball lies in the outfield of TD Ameritrade Park, where the College World Series is played, on June 13, 2014. 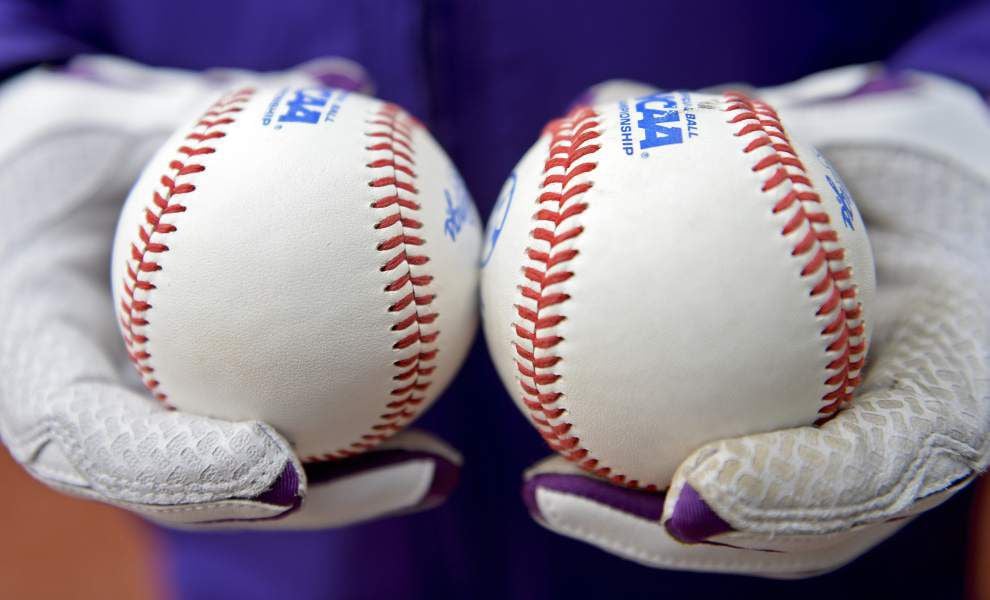 Advocate staff photo by HILARY SCHEINUK -- LSU coach Paul Mainieri shows the new baseball to be used this season, left, compared to last year's. The new balls feature a flatter seam and are expected to fly up to 20 feet farther.

Associated Press file photo by DAVE WEAVER -- An NCAA baseball lies in the outfield of TD Ameritrade Park, where the College World Series is played, on June 13, 2014.

Advocate staff photo by HILARY SCHEINUK -- LSU coach Paul Mainieri shows the new baseball to be used this season, left, compared to last year's. The new balls feature a flatter seam and are expected to fly up to 20 feet farther.

Imagine if college basketball decreased the size of its hoop or if college football’s end zones were just 5 yards deep.

What if golf holes were the size of shot glasses, tennis courts were cut in half and bowling pins weighed 10 pounds each?

How about if college baseball removed the pop from its bats and played its most important games in a ballpark with wind continuously howling in from the grandstands?

You don’t have to visualize the last one. It’s reality.

College baseball’s over-reaction to the “Gorilla Ball” days has the game in its worst hitting slump in nearly half a century.

Teams hit 0.39 home runs per game last season. That’s the all-time low in the recorded history of NCAA college baseball (dating to 1970). Batting average (.270) and runs per game (5.08) were at their lowest since 1973, the final year wooden bats were used.

“You’re not supposed to play outfielders 20 steps from the infield,” said Kyle Peterson, an ESPN analyst and former major leaguer. “That’s not the way the game was meant to be played.”

For the first time in 40 years, baseball season will begin with teams using an altered ball. The new, lower-seam baseball is expected to carry up to 20 feet farther if hit well. It’s expected to bring back the fireworks, reignite offenses that hit the skids when the new bats — stripped of a larger sweet spot — were instituted in 2011.

The new ball is the NCAA’s attempt to return excitement to a game that had gotten stale offensively. But is it enough to balance a game that has seesawed between too much offense — those “Gorilla Ball” days of the 1990s — and its current, sluggish state?

Some believe the new ball won’t negate that expansive, windy ballpark in Omaha, Nebraska. TD Ameritrade Park is a place where baseball’s offense has, on its biggest stage, gone to die.

“We’ll have to wait and see how that plays out,” said Damani Leech, managing director of championships and alliances, overseeing baseball, for the NCAA.

“At least 100 Division I coaches I’ve spoken directly to say it has made a difference,” said Craig Keilitz, president of the American Baseball Coaches Association. “They’ve seen a notable difference. Expectations were we’d get 20 extra feet on a ball hit 365 (feet). They’re getting that plus.”

The new ball is more aerodynamic because its seams are about one-third shorter.

It’s more consistent with the balls used in minor league baseball but still higher than those used in the majors.

Hitters describe the ball as jumping off the bat in a way it never did. It carries farther, they say, and soars into the outfield gaps quicker.

“As a hitter, if you get jammed, you don’t even have to get completely on the barrel,” LSU sophomore Jake Fraley said. “The ball still flies just as far where before you had to barrel it up perfect.”

Most importantly, balls with slower exit speeds than in the past are leaving the park, said Nolan Cain, LSU’s coordinator of baseball operations and the team’s stats coordinator of sorts. An LSU player hit a homer this fall with an exit speed — the velocity off the bat — of 94 mph.

“Last year, that ball wouldn’t have gotten to the (warning) track,” Cain said.

The lowest exit speed of a home run in an LSU game last season was 98 mph. Most of them were 100-plus.

The balls aren’t exclusively kind to hitters. Pitchers don’t mind them, either.

For one, the ball feels much smaller. One pitcher described it as “throwing a rock.” The lower seams also negate those pesky blisters, and some pitchers are noticing more movement and velocity on their pitches.

“I’ve talked to five or six coaches who have doubled or tripled their home run totals in the fall,” he said. “We might see a guy like (LSU shortstop Alex) Bregman hit five or six more homers than he hit last year.”

But is it enough? We might not know until deep into the season.

“We are asking people to be patient,” Leech said.

The NCAA plans to release data throughout the year, comparing hitting statistics from this season to last year. The data will first be released in the third week of the season, then on a monthly basis.

The NCAA is focusing on how the new ball affects four statistical categories: batting average, runs per game, home runs per game and ERA.

“Those are the four categories we’re looking at that we’re hoping to see start trending upwards,” Leech said.

The NCAA baseball committee plans to meet in July to evaluate how the new ball performed and decide whether more changes are needed. Leech said the NCAA’s initial plan is not to make changes for two years.

But this might be just the first step in returning offense to the game. There may need to be changes made to TD Ameritrade Park, too.

It’s not that the fences are any different. It’s the position of the park, Rogers said. South winds prevail in Omaha in the summer, and the park’s home plate points southwest.

“If this new ball doesn’t fix something, I feel you have a pretty swift change to that ballpark,” Rogers said.

“The way they built the field, with the wind blowing in, they turned it into a soccer game — 2 to 1,” Louisiana-Lafayette coach Tony Robichaux said. “At the end of the day, they want more offense. Offense sells tickets.”

Even Leech admitted that the committee is aware of the issue with the wind. Thought has been given to moving the fences.

“That’s something we’ve looked at,” he said. “You’re talking about multi-million dollar changes. It’s not as simple as moving the fences in 20 feet.”

Leech said there are two other areas where change has been discussed: the core of the ball (which remains unchanged in the new balls) and the bats. Those changes likely would increase exit speed, a health concern for the NCAA.

“I don’t think we’re going to go to the major league ball,” Rogers said. “The exit velocity is much greater because the core is harder. ... You could see us going back to a different bat again. I think that’s a possibility.”

Changes to the bat are why the game is in this situation. The move in 2011 to the Bat-Ball Coefficient of Restitution (BBCOR) standard for bats was the NCAA’s way of bringing balance back to baseball. The organization wanted to quiet a game that had gotten too loud at the plate.

“The pendulum swung too far one way,” Peterson said.

So will baseball’s noise return?

LSU’s offensive numbers this fall soared while using the new baseball. The Tigers had nearly the same lineup and, most feel, a more complete pitching staff than the group that threw in the fall of 2013:

Each season since the new bats were implemented in 2011 has seen a drop in the three major offensive categories:

NCAA regionals, super regionals and the College World Series have seen a dramatic drop in long balls since the new bats were introduced: