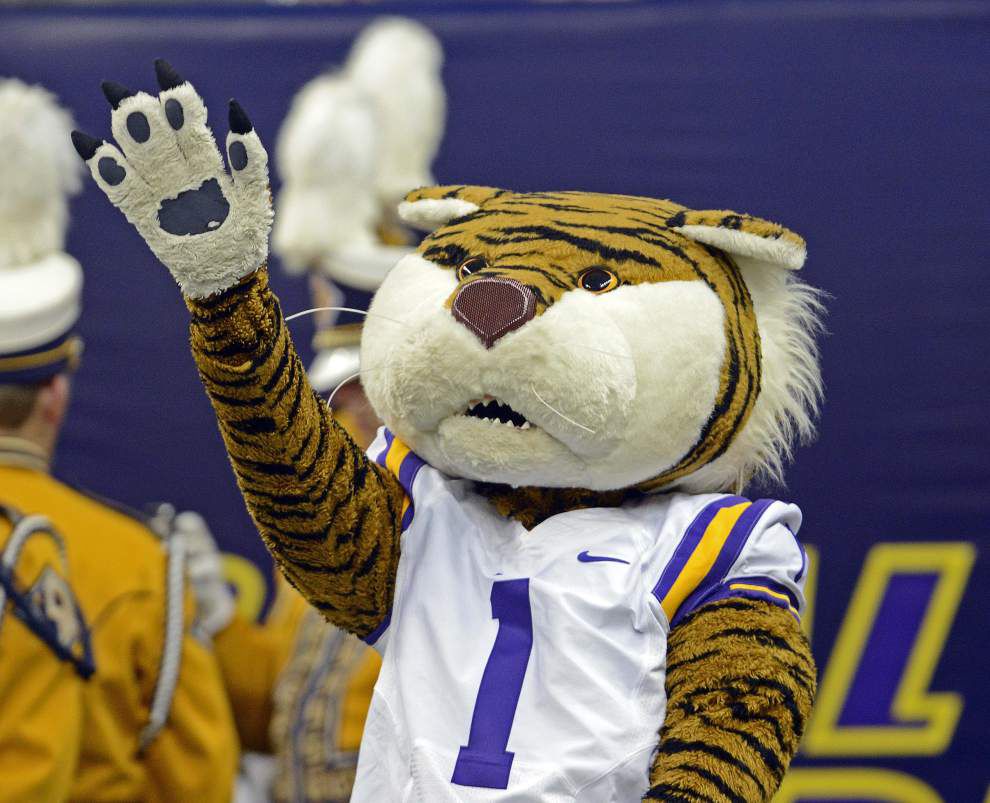 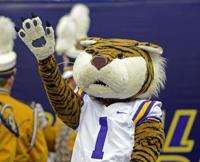 Advocate staff photo by BILL FEIG -- Mike the Tiger mascot waves to the fans during the first half at NRG Stadium in Houston. 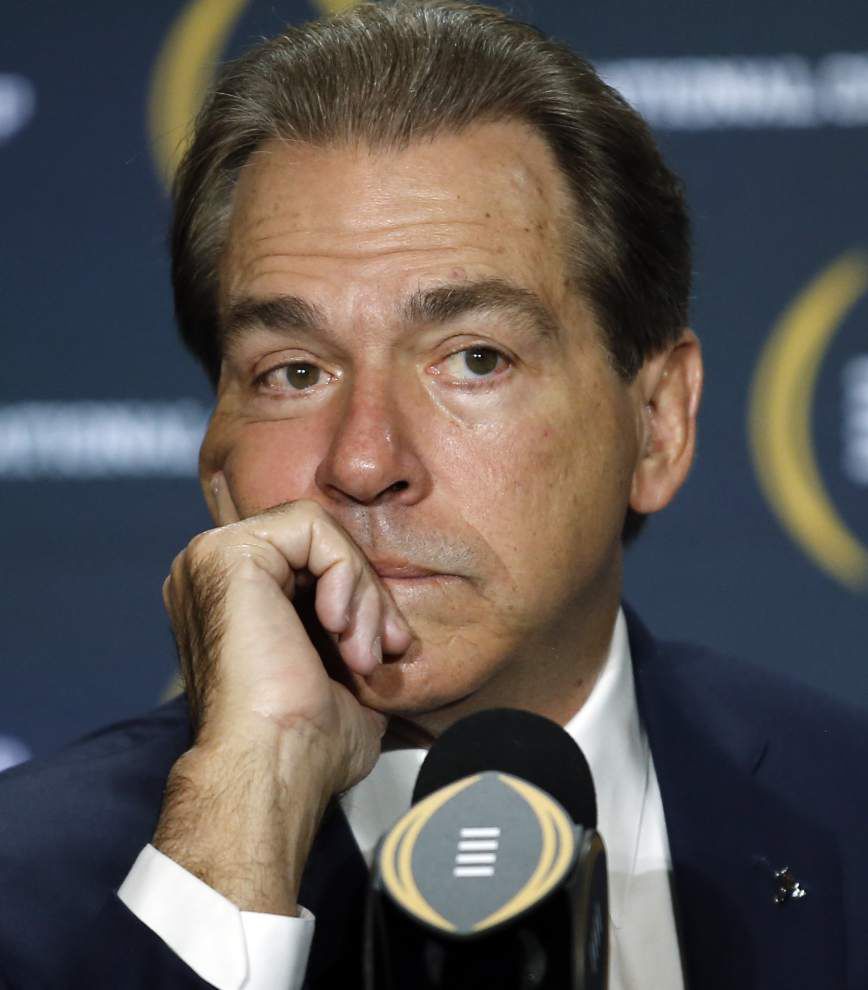 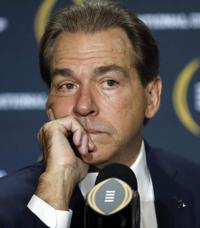 Nick Saban is getting a boost from a Louisiana prosecutor

Advocate staff photo by BILL FEIG -- Mike the Tiger mascot waves to the fans during the first half at NRG Stadium in Houston.

Nick Saban is getting a boost from a Louisiana prosecutor

It’s just six weeks until the start of the 2036 college football season. President Ivanka Trump is steamrolling her way to certain re-election. The London Jaguars are just as heavy of a favorite to win Super Bowl LXXI. And after a decades-long battle between purists and player safety proponents, the kickoff has been made a museum piece along with leather helmets and the flying wedge.

That’s not the only big change for the grand old game. With the expiration of the last of the big conference network TV deals earlier this year, college football is free to complete the realignment of the millennium: Four 16-team super conferences, plus one lower relegation league (more on that later). All of this under the direction of the NCAA’s new college football czar, an unbelievably tanned and youthful-looking 84-year-old Nick Saban.

With the reduction of the Power Five conferences to the Power Four, you no longer have the prospect of a major conference champion being left out of the College Football Playoff. At least, that would have been the issue back in the 2010s, when the CFP started. The CFP of course long ago expanded to eight teams, and now under Czar Saban the playoff is expanding again to 16.

With the prospect of some teams having to compete in a four-round playoff on top of a 12-game regular-season schedule, something had to go. That something was the conference championship games, lucrative and groundbreaking in their day but now obsolete. In 2036, we’re content to accept co-champions again, considering winning any of the eight-team divisions the four super conferences are divided into is as impressive as winning a conference used to be.

Anyone remember the Big 8? Or even the Pac-8? You get the point.

So with great fanfare in December 2035, they played the last SEC Championship Game at the soon-to-be replaced Mercedes-Benz Stadium in Atlanta. (It has become tradition in Atlanta to build a new stadium every 20 years, whether it needs one or not.) Former SEC Commissioner Greg Sankey — still very fit for a senior citizen but nowhere near as tanned as Saban — wowed the crowd by flipping a tractor tire festooned with the names of all the SEC Championship Game winners on it the length of the football field.

Vanderbilt retired the trophy, winning for the third straight time under Saban, who pined for a new challenge after winning that 16th national title at Alabama. Fans everywhere were relieved when the old coot finally accepted a non-coaching job to run college football.

The conference title games weren’t the only casualties. Notre Dame finally gave up its independent status and agreed to join the Big Ten, where it long belonged after the other power schools ganged up and threatened to refuse to schedule the Fighting Irish. And, of course, one of the Power Five conferences had to go. That was the Big 12, the conglomeration of the old Southwest and Big Eight conferences, a marriage of convenience that finally broke along its longstanding fault lines.

Its members were scattered hither and yon among the remaining Power Four, with a couple of members — Iowa State and Texas Tech — sent to the relegation league. (We’re coming to that.) Texas (whose Longhorn Network now only shows reality programming, though we hear the one about Ricky Williams is a big hit) joined the Pac-16 along with Kansas and Kansas State. No, some of the geography doesn’t work, but it’s all about TV ratings anyway, right?

Oklahoma and Oklahoma Stated joined the SEC, placed in the West Division. Righting a long-ago wrong, Missouri moved to the SEC West, while Alabama and Auburn moved to the East. All of the conferences play a nine-game league schedule now — all seven teams in your division and two rotating opponents from the other side — so permanent cross-divisional opponents have gone the way of the kickoff.

Bringing Notre Dame and BYU (also in the Pac-16) into the Power Four fold left those conferences with 66 teams. Someone had to go. So, in something close to the plan lobbied for years ago by political operative and avowed college football junkie James Carville — still attending every LSU home game at a spry 91 — the American Athletic Conference was turned into a “relegation league” of 16 teams, artists formerly known as mid-majors.

Here’s how it all works: Every year, the winners of college football’s eight conference divisions, plus the next eight best teams (selected by a committee of Kardashians for some unknown reason), are bracketed into the 16-team playoff. The bottom two teams from each Power Four league are relegated to the AAC, while the top eight teams from the AAC move up and are assigned as makes the most geographic sense to the SEC, Big Ten, ACC and Pac-16. This gives schools like Boise State, Houston, SMU and Central Florida a fighting chance to earn a seat at the big table and keeps the traditional powers on their collective toes.

It’s a brave new college football world, to be sure, and sure to be figured again once those international American football teams start clamoring for a piece of the action.

THE POWER FOUR CONFERENCES IN 2036

Your one-stop spot for all 2016 LSU football camp previews

As the summer sizzled away, The Advocate's Ross Dellenger and Scott Rabalais have been previewing what to expect from the highly-anticipated 2…