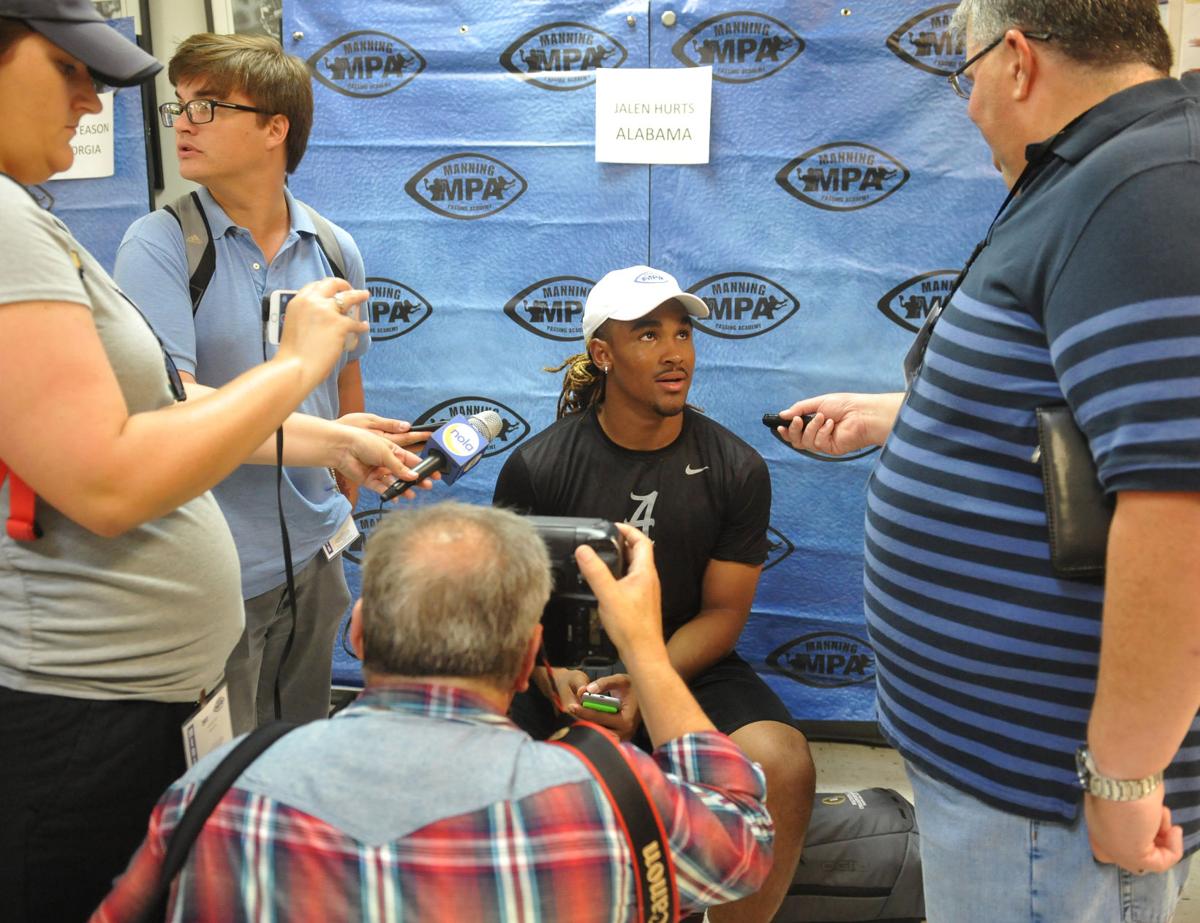 Alabama quarterback Jalen Hurts fields questions from reporters during a media day press conference for the Manning Passing Academy on Friday, June 23, 2017, on the campus of Nicholls State University. 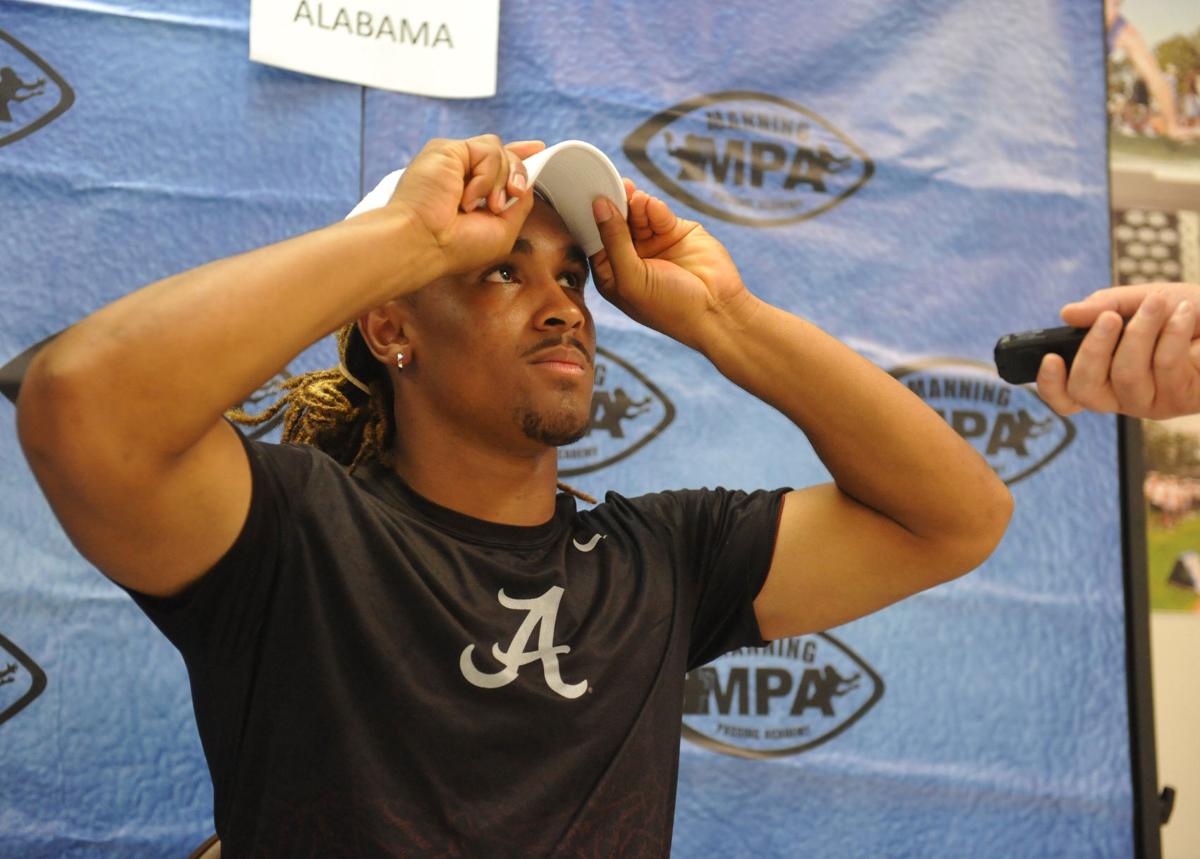 Alabama quarterback Jalen Hurts fields a question from a reporter during a media day press conference for the Manning Passing Academy on Friday, June 23, 2017, on the campus of Nicholls State University.

Alabama quarterback Jalen Hurts fields questions from reporters during a media day press conference for the Manning Passing Academy on Friday, June 23, 2017, on the campus of Nicholls State University.

Alabama quarterback Jalen Hurts fields a question from a reporter during a media day press conference for the Manning Passing Academy on Friday, June 23, 2017, on the campus of Nicholls State University.

Boys will be boys.

So when he and other Southeastern Conference QBs gathered last month in Thibodaux at the Manning Passing Academy, they talked about things that teenagers often discuss.

“Stories from campus, who we’re dating these days,” Eason says with a smile. “Oh yeah, there was girl talk.”

There was football talk, too, among the four SEC quarterbacks who surged onto the national scene as true freshmen last season.

There was a realization among that group — Eason, South Carolina’s Jake Bentley, Ole Miss’ Shea Patterson and Alabama’s Jalen Hurts — that, yes, they enter their sophomore years with more weight on their shoulders than a 19-year-old might normally have to carry.

The foursome aren't only carrying their teams — they’re carrying this conference, which has recently fallen behind nationally at the most important position on the field.

“We get a bad rap,” Bentley says. “Everybody thinks we don’t have quarterbacks.”

More than 1,000 media members converge Monday on the Wynfrey Hotel in the Birmingham, Alabama, suburb of Hoover for a four-day event that’s best described as a media extravaganza. Coaches and players weave through camera- and notepad-carrying reporters, hop on and off television sets and rotate through ballrooms and meeting rooms — each getting a half-day media tour through the Wynfrey’s plush second floor.

It’s here where quarterbacks will, indeed, be discussed. It has been an unstable, erratic position lately.

The league last season had its fewest quarterbacks finish in the top 20 nationally in QB rating (one) since 2011. Just two teams, Ole Miss and Tennessee, went through the 2015 and 2016 seasons with the same starting QB.

The SEC has the look of a league that’s inches away from fixing its quarterback problem. Six teams picked a quarterback as one of their three player representatives for this event, a sign of growth at the spot. As many as 10 of the 14 SEC teams enter preseason camp with a known, stable starter at the position.

“In two to three years, those are names you’re going to hear about,” Arkansas quarterback Austin Allen says. “I think it’s a really special group of quarterbacks.”

Then there’s the veteran five — three juniors and two seniors who, like those freshmen, emerged last season in a variety of ways. At LSU, Danny Etling replaced struggling Brandon Harris in the Tigers' second game. Kyle Shurmur at Vanderbilt and Drew Lock at Missouri turned late-season success as freshmen in 2015 into full-time starting roles in 2016.

Nick Fitzgerald replaced star Dak Prescott at Mississippi State by breaking nine school records, and Allen took over for his brother Brandon at Arkansas by leading the league in passing yards.

“All these guys kind of had these long paths,” Etling says. “We’re finally getting to play and show off everything.”

That goes for those young guys, too. Eason, Bentley, Hurst and Patterson were ranked in the top 11 at their positions leaving high school, according to 247Sports’ composite rankings. Patterson and Eason were Nos. 1 and 2 among pro-style passers, and Hurst was the third-ranked dual-threat quarterback in the 2016 class.

They entered college as inexperienced rookies last summer. By November, they were experienced veterans — despite their age.

For instance, at the start of preseason camp last year, Hurst was just 17. He took over as the starter in his team's second game, just like Eason. Bentley started South Carolina’s final seven games, and Patterson replaced an injured Chad Kelly in the final three.

“I’m excited to get a full season like they did last year this upcoming year,” a smiling Patterson says. “I grew up with them throughout the (recruiting) process. It’s fun to see them have success.”

Bentley believes the SEC's QB struggles are just perception. There are talented guys throwing the football in this league, he says. They just don't put up "gaudy numbers like everyone else does."

Defenses are better, he says, and so are the running backs.

Quarterback production will be better this year, he claims. Well, at least that's what people expect.

“I definitely think people are going to expect more,” Bentley said last month in Thibodaux. “I’ve talked to both (Eason and Hurts). We’ve talked about everything like that. It’s just football to us. A lot of people try to make it a big deal, got to do this and this to win. But at the end of the day, it’s just football. Me and Jalen really hung out a lot last night and talked about it. People are going to expect more.”

LSU’s nation-high 20 commitments in its 2018 recruiting class is steadily shrinking.

The Alabama native skipped his senior year of high school to enroll at USC last summer. It was worth it. He completed 65.8 percent of his passes and started the final seven games.

The top-ranked QB in the 2016 class, Patterson started the final three games last season for injured starter Chad Kelly. He threw for 880 yards and six scores.

The first rookie Nick Saban has ever started at QB, Hurts led the Tide to the College Football Playoff national title game, throwing for 2,780 yards with 23 touchdowns compared to nine interceptions.

The Indiana native took over for Brandon Harris and brought much-needed stability, completing 60 percent of his passes and throwing nine TDs to four interceptions.

Shurmur’s 2,409 passing yards broke the Commodore sophomore passing record set by Jay Cutler in 2003. He threw for 413 yards in a win over Tennessee.

Most believe transfer Jarrett Stidham has the upper hand in the competition with 2016 injury-plagued starter Sean White. Stidham was 75 of 109 for 1,265 yards as a rookie at Baylor.

This is one of the more predictable competitions. Stephen Johnson, one of UK’s media days representatives, is the clear favorite over Drew Baker.

HOW THEY STACK UP

The SEC had just one quarterback in the top 20 nationally in QB rating last season, the fewest since it had none in 2011.

HOOVER, Ala. — A decade ago, Ed Orgeron stepped to the dais at Southeastern Conference media days as the head coach at Ole Miss.

Rabalais: SEC Media Days means football is back; here's what you can expect to see, hear