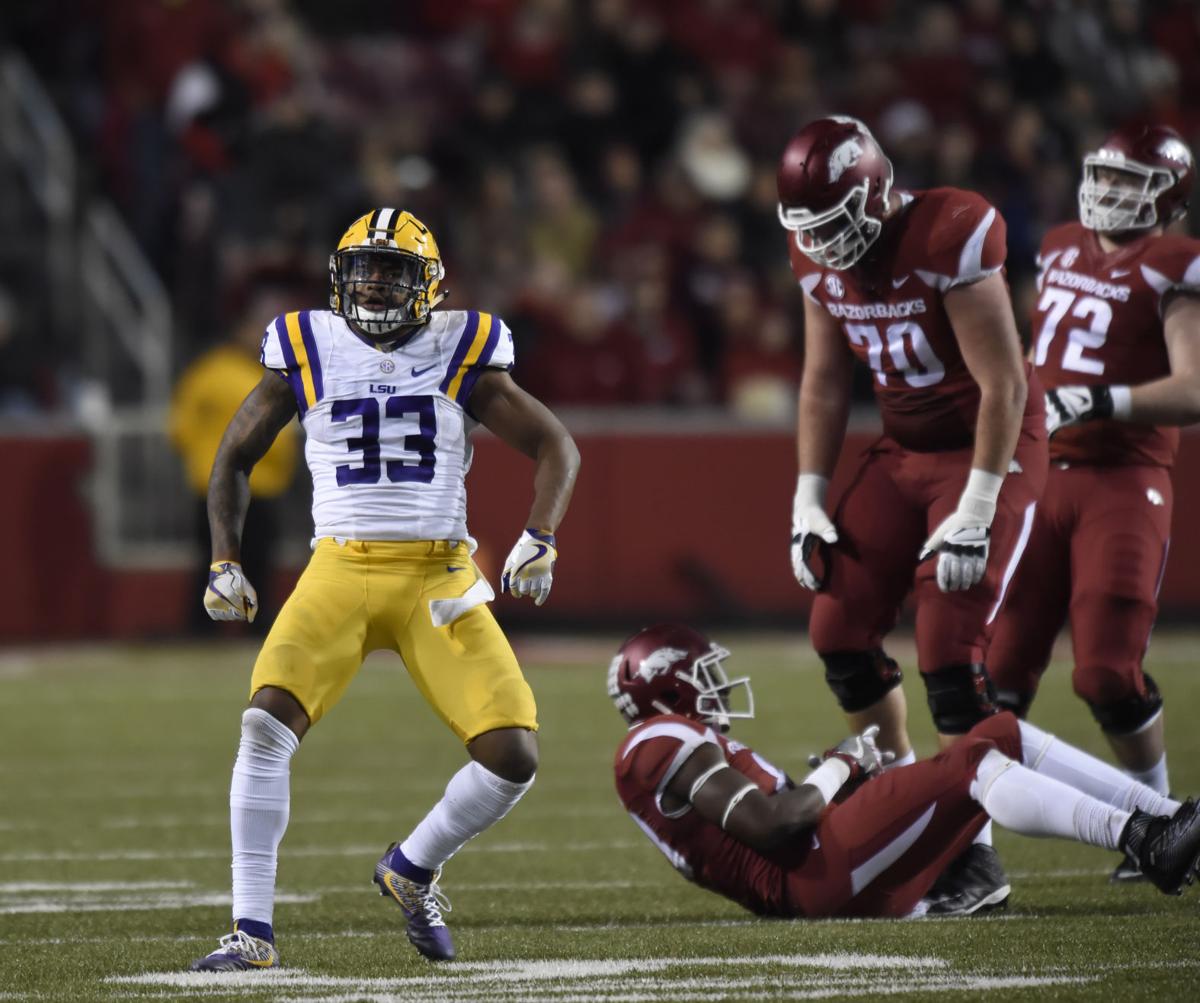 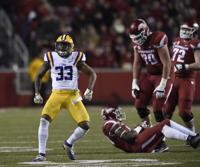 LSU safety Jamal Adams (33) muscles up, celebrating his hard smackdown of Arkansas tight end Jeremy Sprinkle (83), on ground, that helped force an Arkansas punt during the second half of the LSU-Arkansas football game Saturday, Nov. 12, 2016, at Reynolds Razorback Stadium. 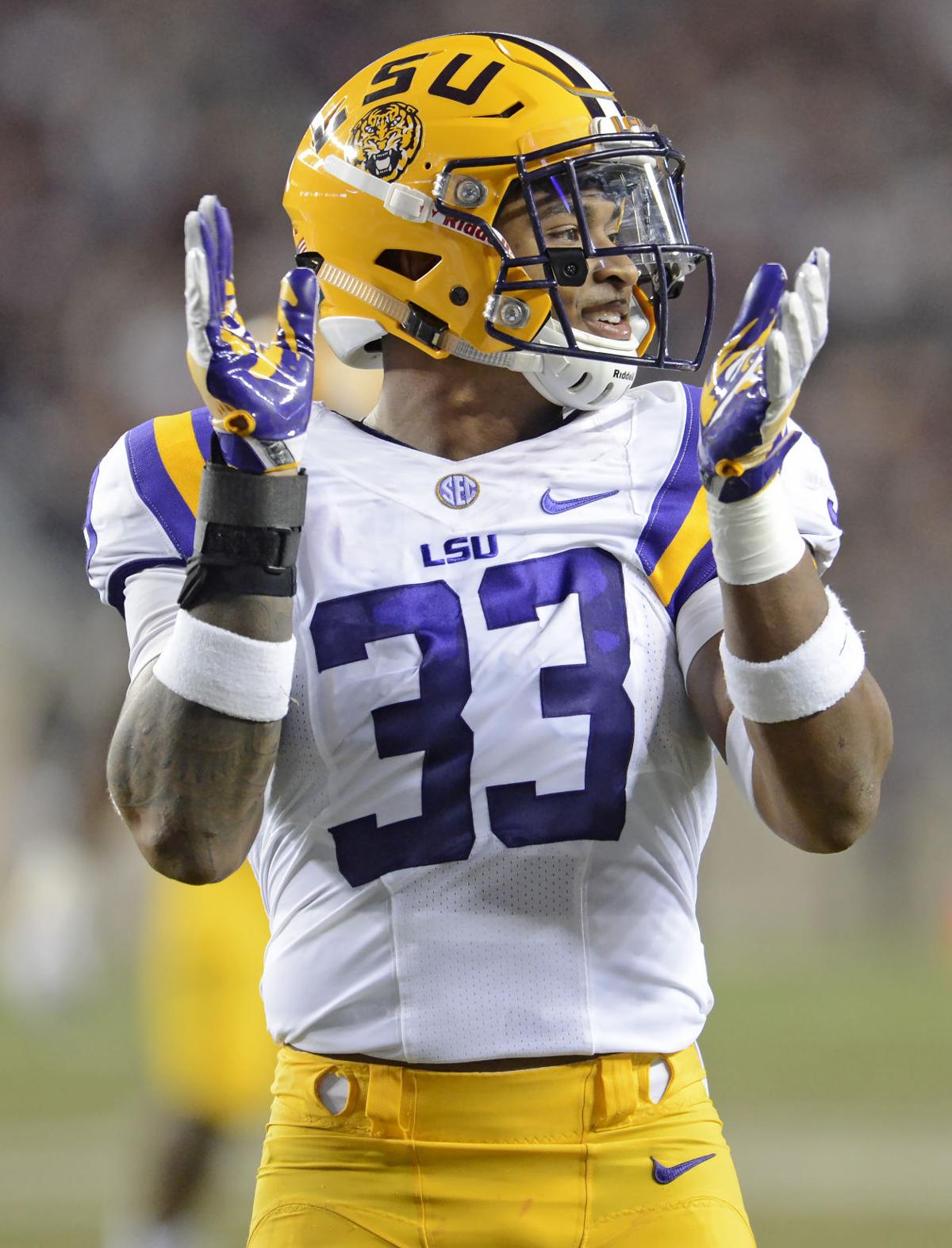 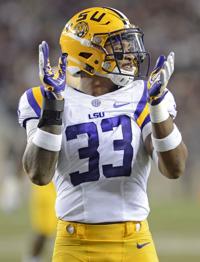 LSU safety Jamal Adams (33) muscles up, celebrating his hard smackdown of Arkansas tight end Jeremy Sprinkle (83), on ground, that helped force an Arkansas punt during the second half of the LSU-Arkansas football game Saturday, Nov. 12, 2016, at Reynolds Razorback Stadium.

LSU safety Jamal Adams has a goal for next year, and it has nothing to do with the NFL.

The junior wants to win the 2017 Heisman Trophy — at least that’s what he’s saying right now and has been spreading on social media.

“That’s what I’m shooting for next year: the Heisman,” he said. “That’s my little campaign I’m starting. Hopefully it blows up enough to where I can get on the board. It’s hard for a defensive player. (Former LSU defensive back Tyrann Mathieu) did it. But I definitely want to start that up and have that as my campaign.”

The idea that Adams would return for his senior season seemed unrealistic. He’s projected to be the No. 14 pick in the 2017 NFL draft in WalterFootball.com’s most recent mock draft. ESPN analyst Todd McShay had Adams as the No. 3 pick in his initial mock draft this week.

But Adams wouldn’t go as far as to say the Tigers’ matchup with No. 15 Louisville in the Citrus Bowl on New Year’s Eve will be his last college game.

“Last game? Huh … that’s interesting,” he said. “I don’t know too much about the last game, but definitely this is one of the last games for the season. I’m looking forward to it, and we definitely want to get the first bowl win under coach (Ed Orgeron). As far as the last game, I’m not familiar with that.”

Leonard Fournette announces he will not play in LSU's bowl game, ending his college career

Leonard Fournette's college career is over.

Adams was asked whether he had made a decision on his future, but he wouldn’t divulge any information.

"What decision? I don’t even … I couldn’t tell you,” he said. “I’m focused on Louisville"

Last month, The Advocate reported that LSU's coaching staff expected Adams and running back Leonard Fournette to bypass their senior seasons to enter the draft. Fournette, who earlier announced he planned to declare for the draft, revealed Friday that he would not play in the bowl game because of a lingering left ankle injury.

The deadline for underclassmen to declare is Jan. 16.

If Adams were to leave, the Tigers could lose as many as six starters on defense. LSU is certain to lose four senior starters: defensive end Lewis Neal, cornerback Tre’Davious White and linebackers Duke Riley and Kendell Beckwith.

LSU receiver Malachi Dupre plans to enter the 2017 NFL draft, according to a report from Ton…

Several of the underclassmen, such as junior defensive tackle Davon Godchaux, have had meetings with Orgeron to discuss their future. Defensive linemen Christian LaCouture, who missed the 2016 season after tearing the ACL in his right knee in the first week of preseason practice, announced this week that he would return for a fifth year of eligibility. Godchaux is the eighth-ranked defensive tackle prospect, according to WalterFootball.com, and is projected as a second- to third-round pick.

Adams, a 6-foot-1, 213-pound defensive back from Lewisville, Texas, is in his second year as a full-time starter. He's third on the team in tackles (70), including 6.5 for loss. He also has an interception, a forced fumble and a fumble recovery.

Adams was deemed a first-team All-American by CBS Sports, USA Today and Pro Football Focus. The Associated Press and the American Football Coaches Association had Adams on their second team.

Rabalais: Leonard Fournette was right to end it; now where does he rank among LSU's all-time greats?

It would have been nice, perhaps even glorious, had Leonard Fournette played in just one more game for LSU.

'Best feeling in the world': Tre'Davious White, a proud LSU graduate, leaves mark on and off the field

Earlier this month, LSU cornerback Tre’Davious White wrote an open letter to fans, expressing his gratitude for the opportunity to play footba…