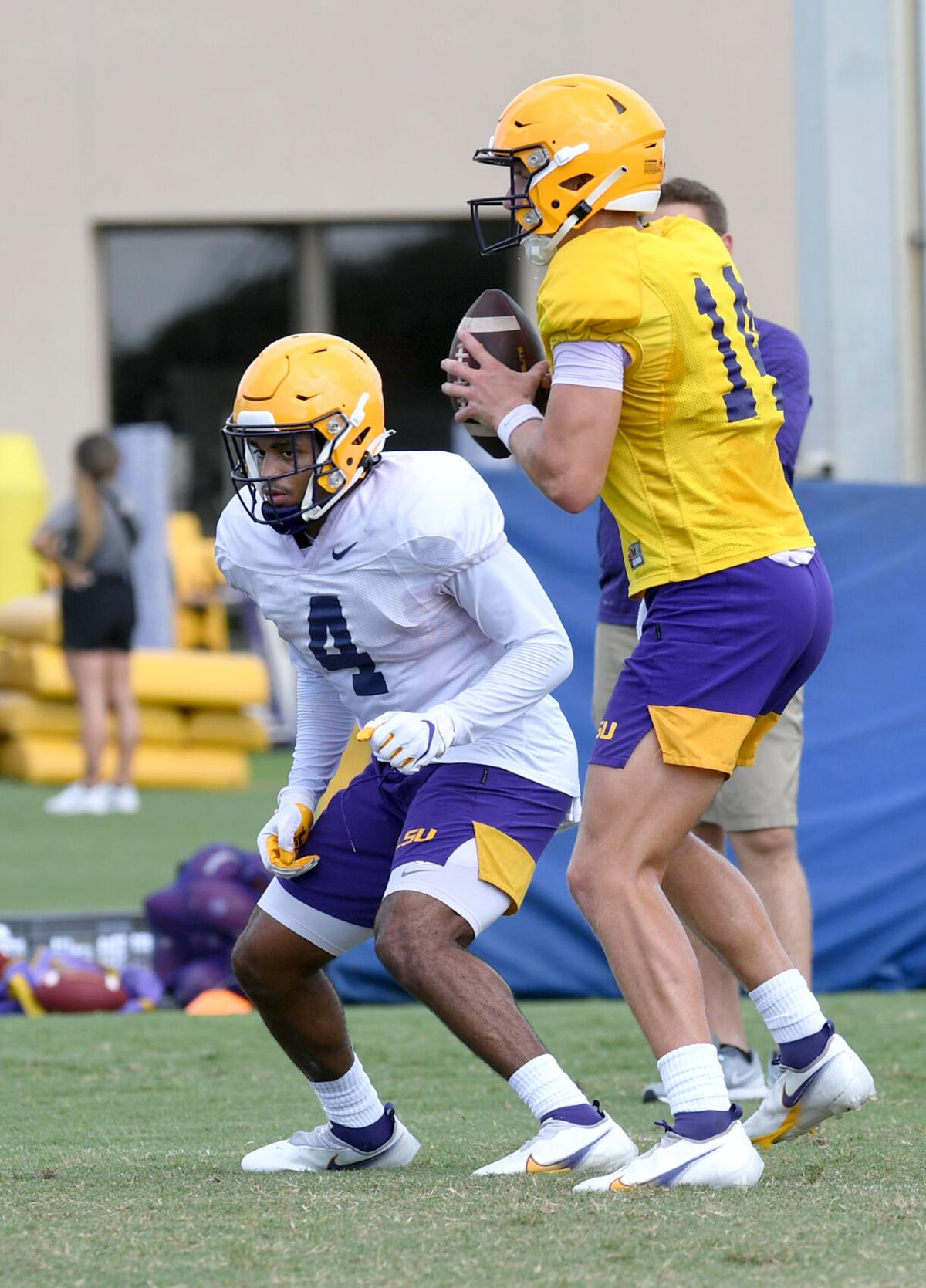 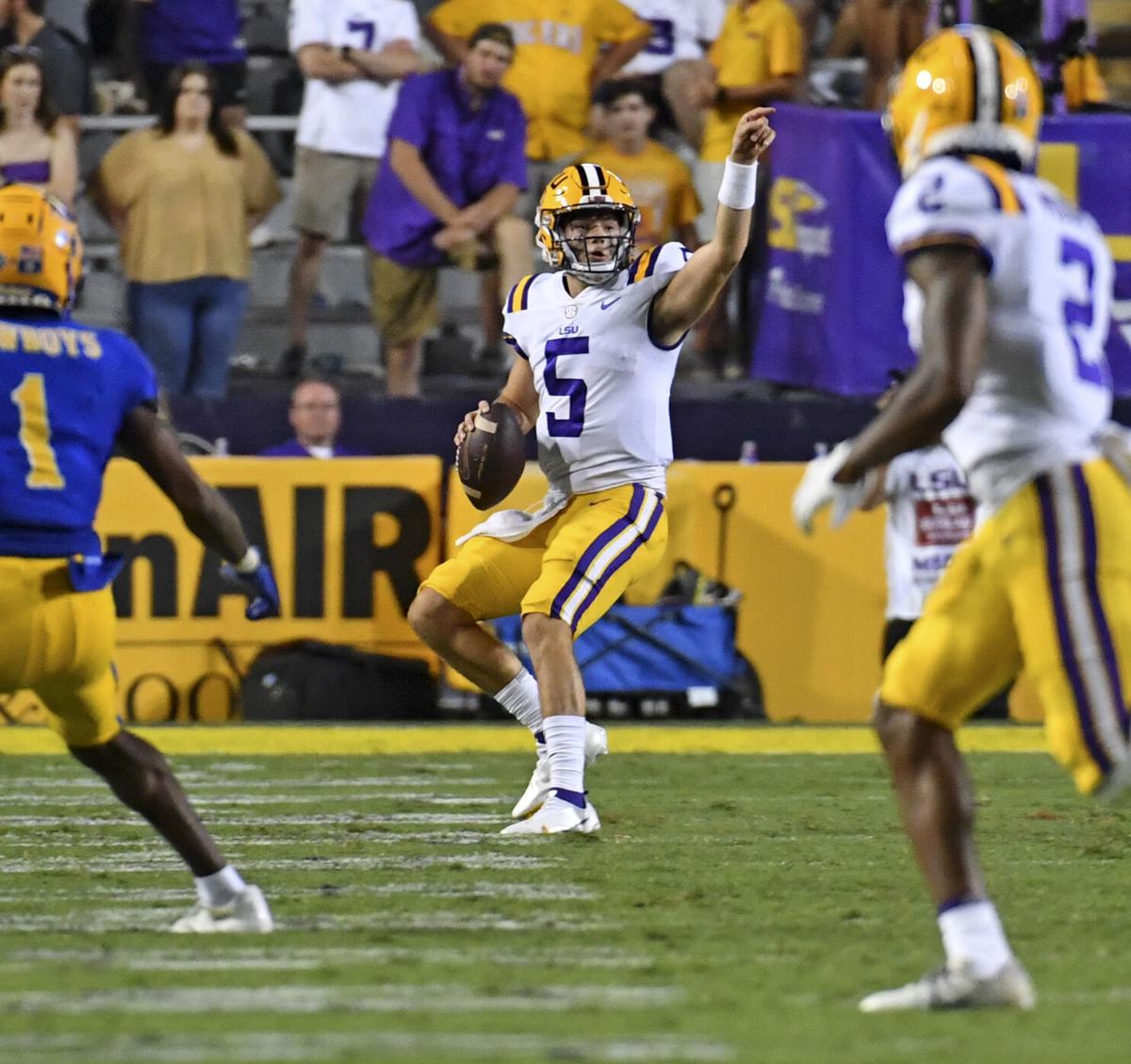 LSU quarterback Garrett Nussmeier (5) points down the field before the pass in the second half of the Tigers' 34-7 win over the Cowboys, Saturday, September 11, 2021, at Tiger Stadium in Baton Rouge, La.

LSU quarterback Garrett Nussmeier (5) points down the field before the pass in the second half of the Tigers' 34-7 win over the Cowboys, Saturday, September 11, 2021, at Tiger Stadium in Baton Rouge, La.

• On first glance, the John Emery situation looks like another black eye for LSU football after the loss to UCLA, the Ed Orgeron “sissy blue shirt” viral video, the ongoing Title IX issues for the program and the university, and of course a 6-6 overall record since the 2019 national championship.

Emery, Coach O confirmed Monday during his weekly news conference, is currently academically ineligible for the year. Whether that will or can change is the subject of much conjecture and a flurry of reports.

It appears at this point, and this could also change, that Emery is ineligible not because someone either in the football office or the academic support program dropped the ball, but because he didn’t manage to pass enough qualifying classes last fall. Personal reasons perhaps played a factor.

What John Emery Jr. being academically ineligible means for him and LSU's running backs

Ed Orgeron confirmed Monday afternoon John Emery Jr. will miss the rest of the season because of academic ineligibility. The running back won’t be able to play unless there’s a sudden change in his status.

A former five-star prospect from Destrehan, Emery never has lived up to his recruiting hype, facing competition from fellow veteran Tyrion Davis-Price and pressure down the depth chart from freshmen Armoni Goodwin and Corey Kiner. There’s also Josh Williams and the anticipated return of Tre Bradford for Saturday’s game against Central Michigan. But Emery’s continued absence does nothing to help an LSU running game searching for a breakout back three weeks into the season.

• Garrett Nussmeier’s turn at quarterback was a jolt of adrenaline in an otherwise sleepy ending of LSU’s 34-7 win Saturday over McNeese State. Nussmeier only went 3 of 10 for 19 yards, but he had that certain indefinable something, that “It Factor” that made you sit up and take notice. He threw deep and threw hard, and his numbers could have been better had he not been victimized by a dropped pass or two.

Was it good enough to challenge Max Johnson for the starting quarterback job? Some folks on social media immediately thought so, but some folks on social media think just about anything about everything. It's true Johnson has looked more tentative and less confident than he did when he started against and beat Florida and Ole Miss last season. But he does have the experience Nussmeier, a true freshman, does not possess.

In short, unless Johnson gets hurt or just blows up against Central Michigan this Saturday, Orgeron isn’t handing Nussmeier his first start at Mississippi State the following week. Coach O wasn’t even guaranteeing Nussmeier would get in the game this week against the Chippewas, possibly thinking the way his team is playing and how CMU has played, there may be little duty for Nussmeier to mop up.

“We’ll see how the week goes,” Orgeron said. “I thought Garrett did well. Max is our starting quarterback. I thought he did some good things under some tough circumstances sometimes. But he did a great job. Garrett brought a spark to us. I like Garrett. If I can play him, I’m going to play him.”

• Yes it was against McNeese — no offense to the Cowboys, a team the Tigers outclassed talent-wise by a wide margin — but LSU still had 16 tackles for loss including eight sacks. Three of those sacks were by freshman tackle Maason Smith, who left a huge imprint (figuratively, but probably also literally) on Orgeron’s son, McNeese quarterback Cody Orgeron.

Smith is listed as the backup at one of LSU’s tackle spots to sophomore Joseph Evans, but that may soon change.

• Orgeron sounded like he got a bit choked up when he mentioned “Larose, my hometown,” and the truckload of supplies the LSU athletic department sent there Monday morning to help folks struggling to recover from the devastation of Hurricane Ida. According to athletic department spokesman Cody Worsham, LSU sent bottled water, paper towels, nonperishable food and other donations collected at Rouses supermarket Sunday afternoon.

Orgeron said he and offensive analyst Steve Ensminger were trying to take a helicopter down to Larose to be part of the distribution but had to turn back because of bad weather.

“It meant a lot,” Orgeron said of the donation. “We wanted to be there, but we were there in spirit.”

There is a lot to be concerned about regarding the LSU football program and where it is headed in the fading afterglow of 2019’s perfect season. But it is still just football. Not roofs torn off homes in a town that as of Monday afternoon was still completely without electricity.

Too often we think of teams and athletic programs as doing good only when they win on the field. That truckload of supplies from LSU was much more important.