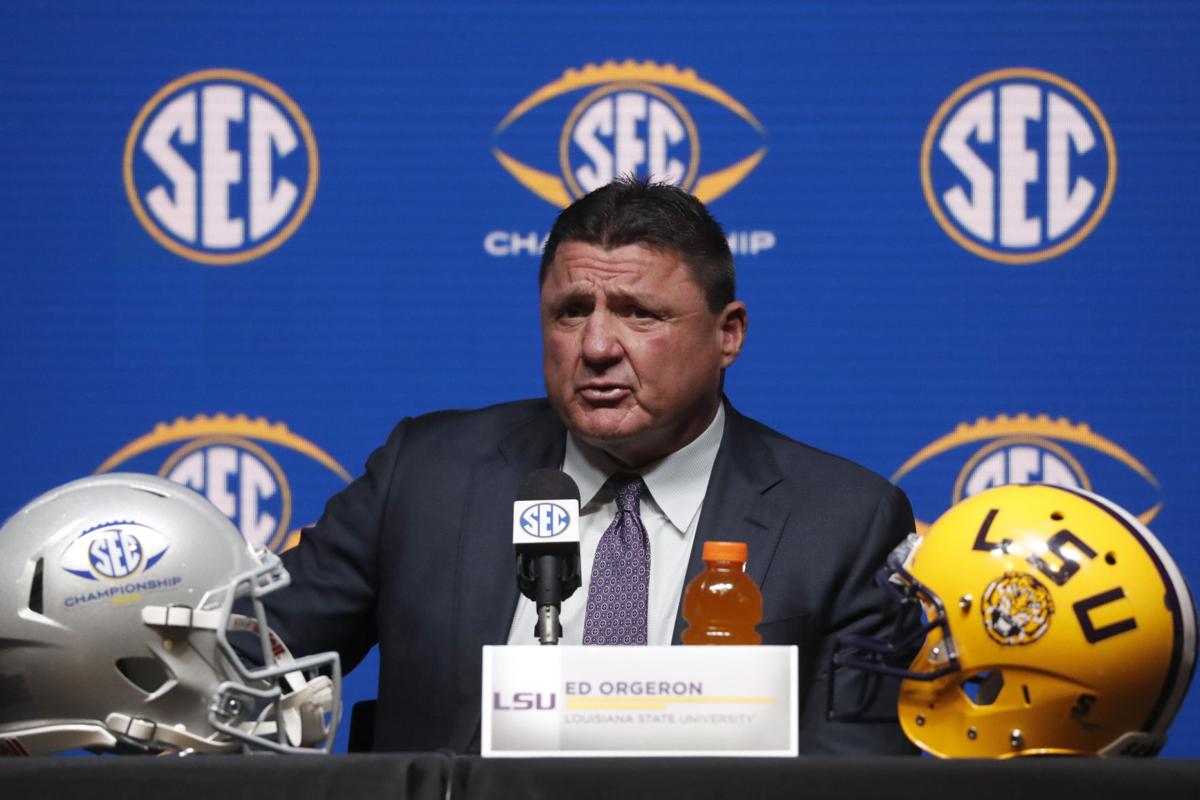 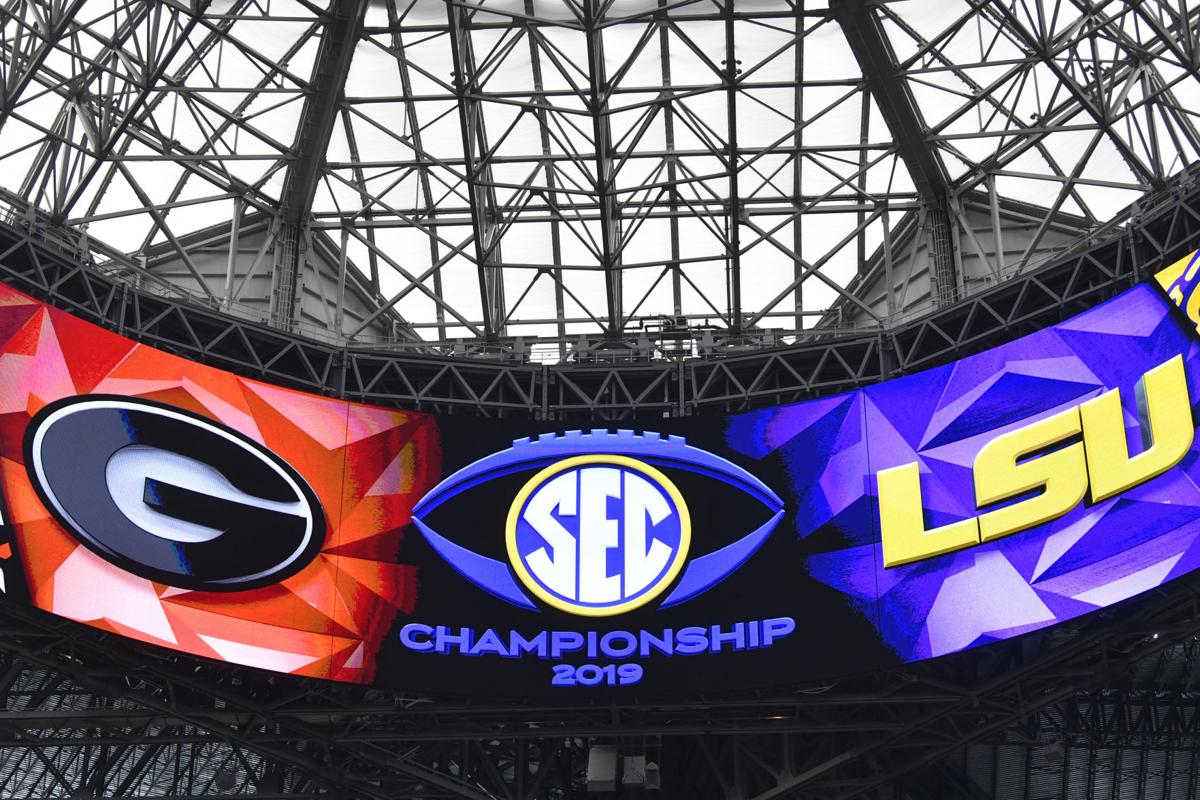 The stadium is seen with signage before the first half of the Southeastern Conference championship NCAA college football game between LSU and Georgia, Saturday, Dec. 7, 2019, in Atlanta. (AP Photo/John Amis)

The stadium is seen with signage before the first half of the Southeastern Conference championship NCAA college football game between LSU and Georgia, Saturday, Dec. 7, 2019, in Atlanta. (AP Photo/John Amis)

The first major college football conferences fell to the coronavirus pandemic on Tuesday, when the Big Ten and Pac-12 announced they won't play their seasons in the fall after days of speculation.

The outcome veered toward that monumental ending a day after multiple reports of the cancellation emerged, even after large groups of coaches and players joined a national outcry under the "We Want To Play Movement" in an attempt to continue playing football in the fall.

Those voices managed only to slow the momentum for a day and, perhaps, prevented further cancellations.

At least for now.

The Big Ten Conference is announcing that its fall football season is canceled, the league officially announced Tuesday. The conference is the…

Of the Football Bowl Subdivision's 10 conferences, four have announced they won't play football until at least the spring: the Mid-American, the Mountain West, and, now the Big Ten and Pac-12.

How will the Big Ten and Pac-12's decision to postpone football affect the Southeastern Conference?

Commissioner Greg Sankey said Tuesday morning on the Dan Patrick Show that the league wouldn't be guided by another conference's decision — a point he echoed in a statement released after the Big Ten and Pac-12 news broke.

"I look forward to learning more about the factors that led the Big Ten and Pac-12 leadership to take these actions today," Sankey said. "I remain comfortable with the thorough and deliberate approach that the SEC and our 14 members are taking to support a healthy environment for our student-athletes."

That doesn't necessarily mean the SEC would be comfortable being the only conference playing college football, if either or both of the two other Power Five leagues, the Atlantic Coast and Big 12, decide to cancel.

"I don't think that's the right direction, really," Sankey said on Patrick's show. "Could we? Certainly... I'm not sure that's the wisest direction."

Multiple reports said the Big 12 presidents decided Tuesday night to continue pursuing playing this season, for now. The league's choice could influence the fate of the ACC and SEC, which have shown they still intend to play.

The ACC also released a statement Tuesday afternoon, saying it will also "continue to make decisions" in the future and is "pleased" with its current safety protocols.

Beyond the common concerns with COVID-19, a new and influential concern has recently emerged: myocarditis, a condition that causes inflammation of the heart muscle that could be linked to the virus.

The condition was found in at least five Big Ten athletes, according to ESPN, and it was a crucial factor in the league's ultimate decision to postpone.

The commissioners of the five major conferences discussed the condition in a meeting over the weekend, and Florida State president John Thrasher said at a Tuesday roundtable that two of the commissioners "expressed some real concerns about continuing to play."

Thrasher did not say which leagues the two commissioners represented.

"(Myocarditis) seemed to get a lot of attention nationally," Thrasher said, "and I think it caused a lot of the other conferences to say, 'Let's take a step back. Let's review where we are.' "

After a public outcry from influential voices that included high-ranking athletic officials and President Donald Trump, the fate of Southeaste…

Florida State is a member of the ACC, and Thrasher said the league's presidents met Sunday and agreed they should go over the medical aspects again "to make sure our protocols" are appropriate.

Thrasher said the ACC presidents will probably have another meeting later this week.

The SEC's presidents met in an impromptu meeting Monday evening, when they decided to also continue monitoring the health situations surrounding coronavirus, a source told The Advocate.

The Big Ten was scheduled to begin its season three weeks earlier, on Sept. 5, which likely provided more urgency in their decision.

The Southeastern Conference presidents will meet later Monday afternoon, and it is expected the school leaders will discuss plans for fall ath…

When the Big Ten became the first major conference to commit to a league-only season in early July, the SEC waited until the end of the month before also moving to a league-only, 10-game season.

Still, the Pac-12 CEO Group unanimously voted Monday to postpone all fall sports, including basketball and other winter sports through Dec. 31. Commissioner Larry Scott noted in a statement that the league's safety protocols were not enough to keep up with a situation that was becoming more challenging.

"Unlike professional sports, college sports cannot operate in a bubble," Scott said. "Our athletic programs are a part of broader campuses in communities where in many cases the prevalence of COVID-19 is significant."

Report: Big Ten cancels football in the fall and is the 1st Power 5 conference to do so

The Big Ten has voted to call off its football season for the fall, becoming the first major college conference that won't play football in th…

SEC leadership has expressed belief it can continue playing football within the conference's safety protocols, which, in part, has the league coordinating testing with a third-party provider at least twice a week during the season. Schools are urged to find a way to test a third time.

“Were that advice to change, it certainly would be a stopping point," Sankey said. "The indicators are we can right now do what we’re doing in a healthy way.”

LSU athletic director Scott Woodward said in a statement Monday that "the recent flood of reports surrounding college athletics does not alter" the league's steady approach in deciding what it will do with its football season.

"I believe our student-athletes want to play," Woodward said. "We owe it to them to make every effort to do so safely.”

LSU coach Ed Orgeron told WNXX-FM, 104.5's "Off the Bench" on Tuesday morning that "the easiest thing to do right now is say no" to a football season.

"But we want to compete for our players and find out what’s best for them," Orgeron said. "Now, at the end, if our players can’t play, I’m not going to put them in harm's way, and they know that."

Orgeron also appeared on Fox News on Tuesday for the third time this year and said "there's no Plan B here at LSU," and the team is "going forward ahead."

Coronavirus still has a significant hold in Louisiana. On Tuesday, the Louisiana Department of Health reported 1,164 new cases and 26 deaths.

LSU players have also taken action because of the virus. Senior linebacker Travez Moore shared his experience with COVID-19 last week on Twitter, saying he lost 27 pounds, lost appetite and had difficulty breathing.

"Bro coronavirus is real," wrote Moore, who recorded three tackles, a half tackle for loss and half a sack in 2019.

On Saturday, senior defensive lineman Neil Farrell became the first LSU player to opt out of the season. The SEC announced in July that players who choose to sit out the season because of health concerns will still have their scholarships honored.

Farrell posted a message on Twitter that said the virus has hit his family hard and that his grandmother is currently battling the virus in the hospital.

Orgeron said Tuesday he encouraged Farrell in his decision.

"I said, 'Neil, go home,' " Orgeron said. " 'We told you we were going to do that. Come back next year. Come back in great shape and have a great senior year.' "

LSU now knows its 2 extra SEC opponents; next up: the full schedule

The Southeastern Conference has added a home game with Missouri and a road game with Vanderbilt to LSU’s 10-game SEC-only schedule, the league…

Orgeron agreed with a common point among league leaders that players are most safe on campus. It's a point that Alabama coach Nick Saban also told ESPN on Monday, saying "players are a lot safer with us than they are running around at home."

Indeed, players don't have the same access to the expensive medical care colleges are providing at home, but it's not certain college athletes will be sent home if the football season is canceled. LSU has adopted a hybrid return-to-campus plan that uses both online and in-person instruction. Players would likely stay on campus, go to school and train as if it were the offseason.

LSU has declined comment on specifics regarding coronavirus cases within its athletic department and has not released updates and case numbers like schools such as Clemson, Kansas State and Texas.

Orgeron said Tuesday the team has "very few guys that have it," and most of the players who contracted the virus were asymptomatic.

These are the new SEC guidelines for canceling games and coronavirus testing for football, more

Former LSU quarterback Peter Parrish, who entered the NCAA transfer portal on Monday, has committed to play at Memphis.

At 10:30 p.m. ET Sunday, more than a dozen of the most prominent players in college football joined a Zoom call. Organized by two Clemson play…