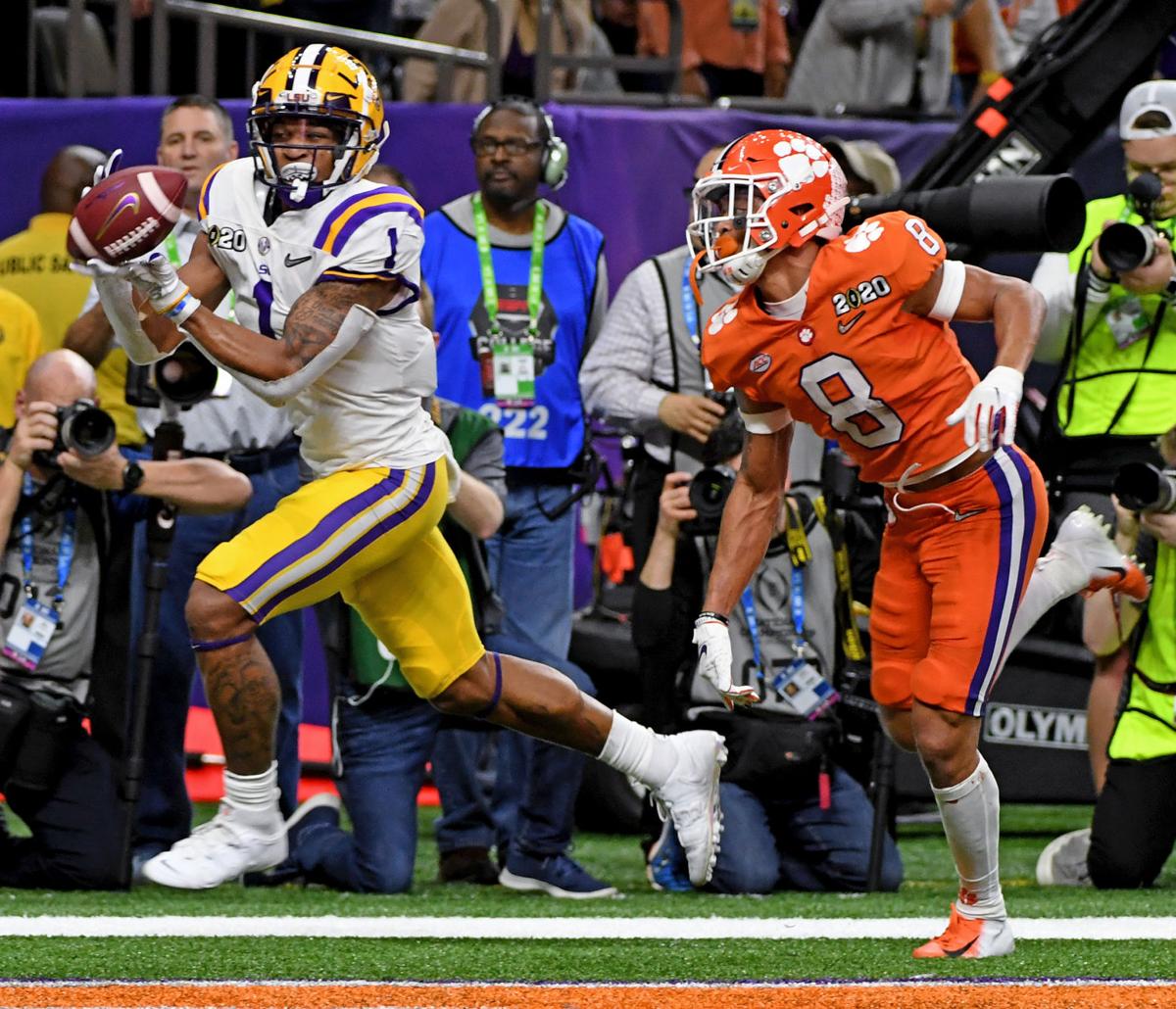 LSU wide receiver Ja'Marr Chase (1) pulls in a touchdown pass in the end zone as Clemson cornerback A.J. Terrell (8) gives chase during the first half of LSU's CFP Championship Game against Clemson at the Mercedes-Benz Superdome Monday Jan. 13, 2020, in New Orleans, La. 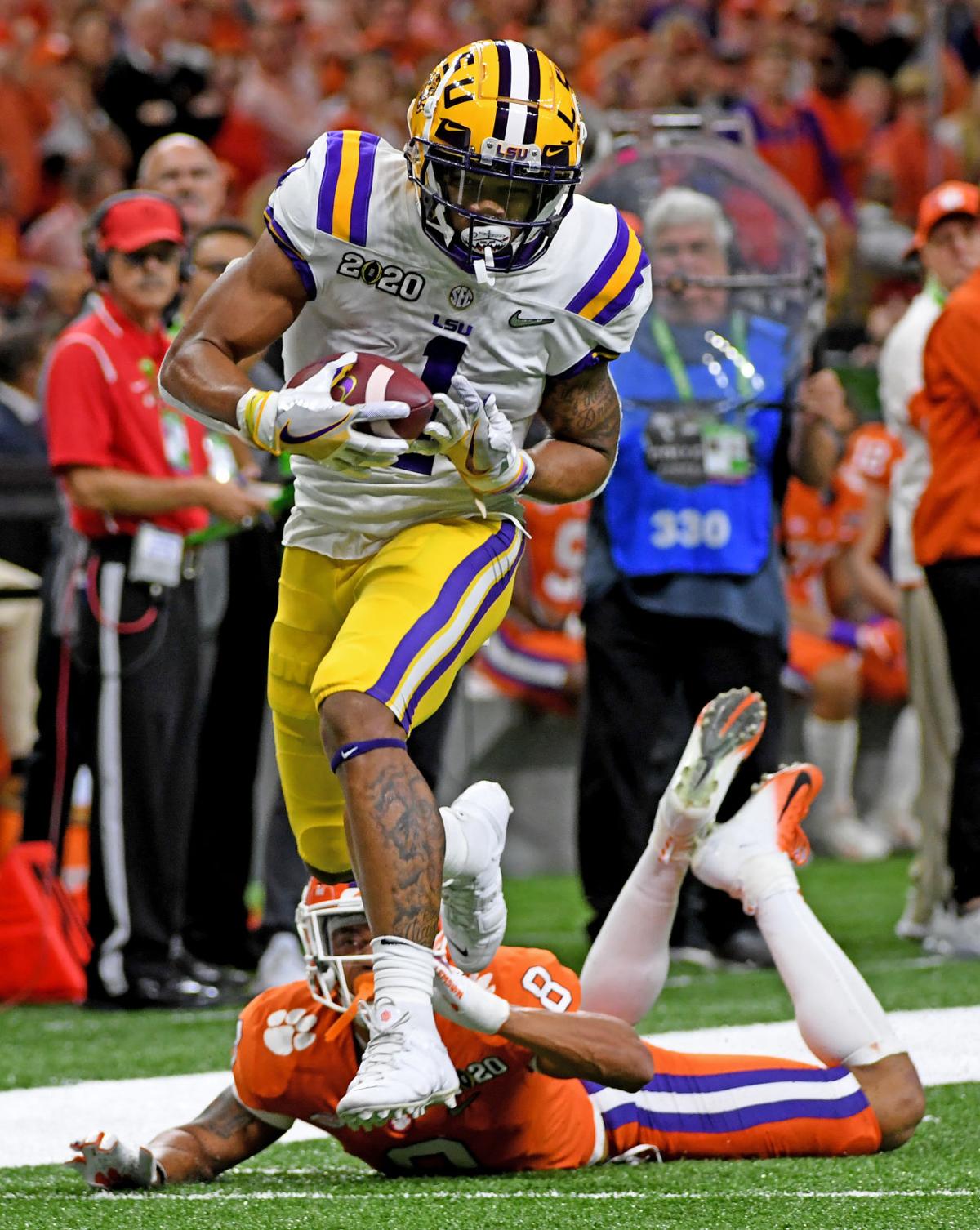 LSU wide receiver Ja'Marr Chase (1) heads to the end zone for LSU's first touchdown as Clemson cornerback A.J. Terrell (8) can only watch after diving and missing the stop during the first half of LSU's CFP Championship Game against Clemson at the Mercedes-Benz Superdome Monday Jan. 13, 2020, in New Orleans, La. 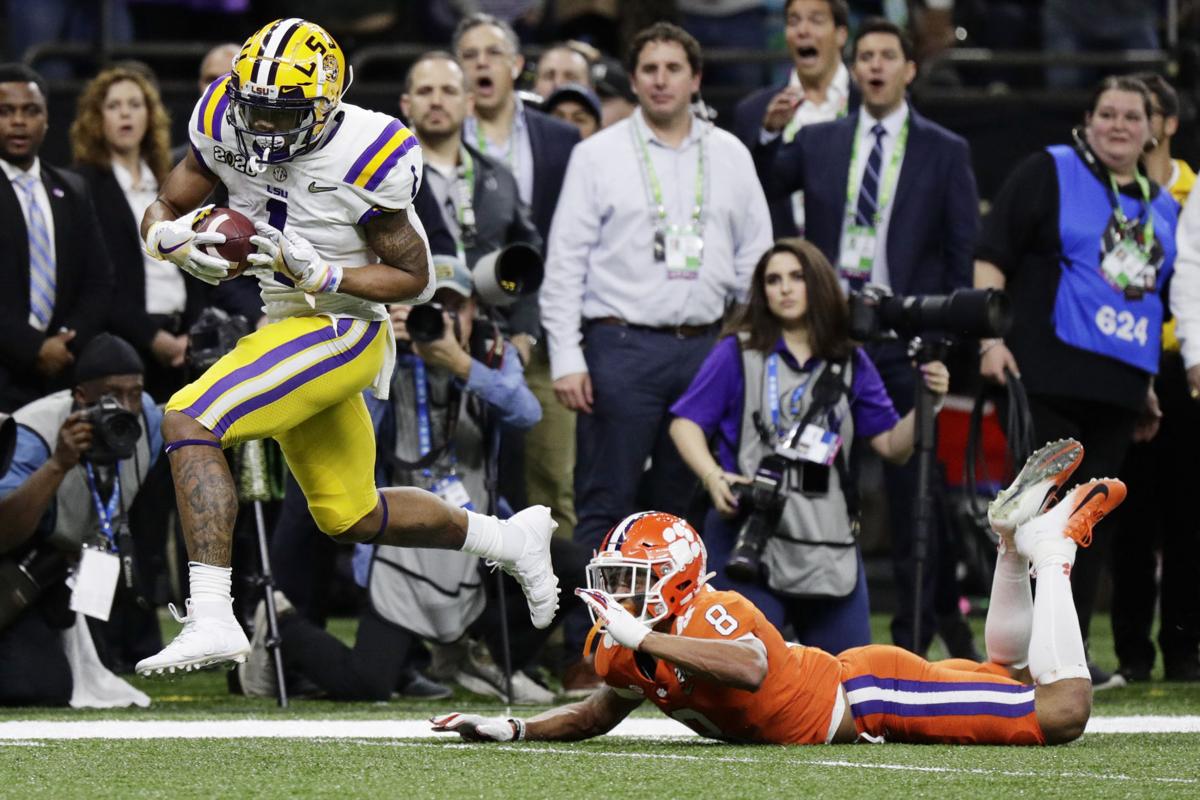 LSU wide receiver Ja'Marr Chase (1) pulls in a touchdown pass in the end zone as Clemson cornerback A.J. Terrell (8) gives chase during the first half of LSU's CFP Championship Game against Clemson at the Mercedes-Benz Superdome Monday Jan. 13, 2020, in New Orleans, La.

LSU wide receiver Ja'Marr Chase (1) heads to the end zone for LSU's first touchdown as Clemson cornerback A.J. Terrell (8) can only watch after diving and missing the stop during the first half of LSU's CFP Championship Game against Clemson at the Mercedes-Benz Superdome Monday Jan. 13, 2020, in New Orleans, La.

Somewhere on the list of goals Ja’Marr Chase posted on a mirror in his home included winning a championship.

Everything else the LSU receiver did Monday turned out to be a bonus.

Chase set a College Football Playoff championship record with 221 yards receiving on nine catches, and he scored two touchdowns for LSU in its 42-25 victory against Clemson at the Mercedes-Benz Superdome.

“It’s a dream come true,” said Chase, whose 20 touchdowns for the season set a Southeastern Conference record. “I had all my goals written down on my mirror. I accomplished every goal I wrote down. I got to come up with new goals now.”

Chase scored multiple touchdowns for the sixth time this season while also setting up two other scores with two long gains.

The touchdowns came on passes of 52 and 14 yards in the first half. He also set up Joe Burrow’s 3-yard touchdown run in the second quarter with a 56-yard gain on another long pass down the right sideline.

The other long gain came in the third quarter. LSU faced a third-and-11, and Chase lined up to the left of the formation for a quick screen pass that had him running behind left tackle Saahdiq Charles for 43 yards to the Clemson 16. LSU scored two plays later on a 4-yard pass to Thad Moss.

Chase played much of the first half with Clemson cornerback A.J. Terrell in man coverage. According to Pro Football Focus, no receiver with Terrell in coverage gained more than 60 yards through Clemson’s first 14 games.

Chase topped that figure with Terrell in coverage in the first half alone. The 52-yard touchdown came with Chase a step ahead of Terrell as the pair raced down the right sideline.

“They played press-man coverage on me,” Chase said. “Joe wants to take that every time.”

Terrell also let Chase slip ahead of him on the 14-yard touchdown to the back right corner of the end zone. The second touchdown put LSU ahead 21-17 for a lead it never relinquished.

When the game began, Burrow didn’t look for Chase to be open because the quarterback figured the wideout would be double covered.

But with only one defender on Chase as LSU failed to pick up a first down through two possessions, Burrow began the look his way. That set the stage for the first long pass play that resulted in a touchdown that drew LSU to a 7-7 tie.

“I didn’t think there was any way they were just going to play man with Ja’Marr, so I wasn’t really looking his way,” Burrow said. “And then I got back to the sideline after the second drive and I was like, ‘They really are playing man-to-man with Ja’Marr,’ so we started going to him heavy and he plays so well. That’s just the kind of guy he is. He works so hard for that.”

Late in the third quarter, Chase nearly caught what would have been his third touchdown on a high pass that hit off his right hand as he reached the end zone, running one step ahead of cornerback Deron Kendrick.

Instead, it was Terrace Marshall Jr. who scored the next touchdown. That came in the fourth quarter.

For Chase, this wasn’t his first game in the Dome. The Rummel grad played there at the end of his high school sophomore season in a state championship loss against Catholic High.

Rabalais: LSU football had the best season of all time. Need proof? Look at path to national title

He’s not the only LSU wideout to have a big game in the postseason.

In the Peach Bowl semifinal against Oklahoma, it was junior Justin Jefferson with 14 receptions for 227 yards and four touchdowns.

“We never know whose game it’s going to be,” Jefferson said. “Last game, it was my game. This game, it was Ja’Marr. To have somebody that special on the side of me, that’s great to have.”

A repeat for LSU? Here's how Ed Orgeron is already working on the 2020 season