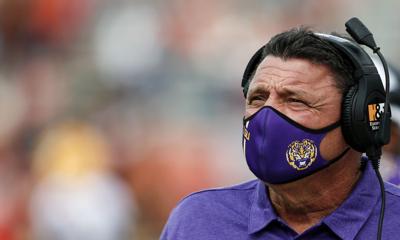 One day after star wide receiver Terrace Marshall announced he was opting out of the rest of the season, LSU coach Ed Orgeron said he would respect Marshall’s decision. Marshall was the sixth player to opt out — the third to do so in the middle of the season — and Orgeron called it a “business decision” for an elite prospect that will likely be a top selection in next year’s NFL draft.

Still, Orgeron fielded a question at a news conference regarding how he feels about the culture inside his program — the Tigers had just lost 20-7 at Texas A&M, falling to 3-4 at the time — and how large the effect of Marshall’s departure would be.

“Overall, I think we built a great culture inside the building,” Orgeron said then. “This year has been a challenge obviously with COVID-19, other stuff going on, (and that) has kind of put a little spin on everything. You don’t know when the next guy is going to opt out.”

Another week has passed. Another LSU loss has come and gone. Another star player has opted out.

Orgeron confirmed Wednesday that tight end Arik Gilbert has decided to opt out of the rest of the season. This concluded a three-day waiting game that began when news broke late Monday night that Gilbert was considering leaving the football team.

Seven LSU players have either opted out or entered the NCAA transfer portal since preseason camp began, and Gilbert’s potential departure is the most alarming yet. While most of the other players are leaving for the NFL, Gilbert is a true freshman — a former five-star recruit whose success is tied to LSU’s future success.

Several factors formed Gilbert’s upcoming decision. Orgeron told WNXX-FM in a radio interview Tuesday that “his body is hurting,” and that his mother was in town helping him through the decision. Multiple reports have stated Gilbert, a Georgia native, is “homesick.” Gilbert’s role in the offense is also a factor, multiple sources have said.

Orgeron is now beginning an urgent fight to keep Gilbert from transferring from the program.

"Do I think we have a chance at getting him back next season? Yeah," Orgeron said in Wednesday's weekly SEC teleconference. "Is there a chance of him transferring? I don't know that."

Ultimately, Gilbert’s situation is a window into just how turbulent the environment has been inside LSU’s football operations building. Several other players are also considering leaving, multiple sources said, and concern is rising over just how many players will depart from a roster that's already substantially depleted.

A brutal season on the field, paired with the coronavirus pandemic and its effects, have tanked the overall morale within the football team. Three players spoke about these factors Tuesday in a video call with reporters.

There’s another major factor that played out behind the scenes: Multiple sources told The Advocate that team morale turned south before the season even began, when a large group of players felt Orgeron mishandled a team meeting regarding the team's player-led march in August amid national protests against police brutality.

The players skipped practice that day, met outside Tiger Stadium and marched to the university president's office without Orgeron, who later told reporters he didn't know about the protest before it happened.

Orgeron met up with the players at the president's office and took part in a meeting that lasted about an hour. He later told reporters he and the players talked "about the things they're going through and how we can be a part of the solution."

Privately, the meeting did not come off as productive as described. Orgeron and some players were upset during the meeting, multiple sources said, and while some players said the situation could've been handled better by all sides, other players left feeling Orgeron wasn't supportive.

Three days after the meeting, star wide receiver Ja'Marr Chase announced he was opting out of the season, joining starting nickel safety Kary Vincent in preparing for the NFL draft. By the end of the week, starting nose tackle Tyler Shelvin opted out as well.

None of the three players returned attempts for comment, and Orgeron declined an interview request for this story.

Orgeron disputed the notion that his locker room was breaking apart in his interview with WNXX, insisting that the team is only "disappointed in the way we've played, disappointed in our record."

LSU began its national title defense Sept. 26 with a 44-34 loss to Mississippi State in a game that starting safety JaCoby Stevens called "embarrassing." It was the first of a series of disappointing losses for the Tigers, who later lost their starting quarterback, Myles Brennan, in a 45-41 loss at Missouri on Oct. 10.

LSU is 3-5 with two games remaining — one against No. 6 Florida on Saturday and the regular-season finale Dec. 19 against Ole Miss, and the program is in danger of having its first losing season since 1999.

In that span, three players have left the team midseason: Marshall; defensive tackle Siaki "Apu" Ika, who entered the NCAA transfer portal after a 52-24 win over South Carolina on Oct. 24; and Travez Moore, who announced he was opting out a day later.

Starting center Liam Shanahan told reporters Tuesday he didn't know of anybody else on the team who is considering leaving.

"We're still in the season," Shanahan said. "Obviously, it hasn't been a great season by any means. But it's not over yet. The guys that are still here, we're still working hard to do everything on the most positive note possible."

Any further departures will leave Orgeron with an even more complicated roster-management situation — for this season and the next.

Without Gilbert, LSU is down to 69 scholarship players from the 85 maximum the NCAA allows (including three walk-ons who were awarded scholarships), and the university also self-imposed a reduction of eight scholarships over the next two years when a series of LSU infraction cases were taken up by an independent enforcement panel this summer.

Orgeron and his staff have regular roster-management meetings every Monday, and he told reporters he has already begun re-recruiting players who would regularly graduate but can return because of the NCAA's COVID-19 eligibility waiver.

Some players are "dead set" on leaving for the NFL, Orgeron said, but he said others are considering returning.

Can Orgeron keep a stream of players from leaving the program?

Linebacker Jabril Cox told reporters Tuesday that "everything that happened over the summer is cleared up right now." He said "these are weird times" right now, and the outcome of the season has been a major influence.

"With everything that's going on, you could look at it as more than football," Cox said Tuesday. "But at the end of the day, if we were an 8-0 team, things would be totally different."

LSU punter Zach Von Rosenberg noted to reporters Tuesday that a year ago, the Tigers had just beaten Georgia in the Southeastern Conference Championship Game — the beginning of a record-setting postseason run that resulted in the program's fourth national championship.

"The freshmen got pitched a dream last year," Von Rosenberg said. "They went on recruiting visits and were told certain things. All that came to an abrupt halt when we had a pandemic occur. I get it; that's everywhere. But add on top of that, you've got to follow up the greatest college football season in history and some of the greatest players we've ever had come through LSU, and it's different now.