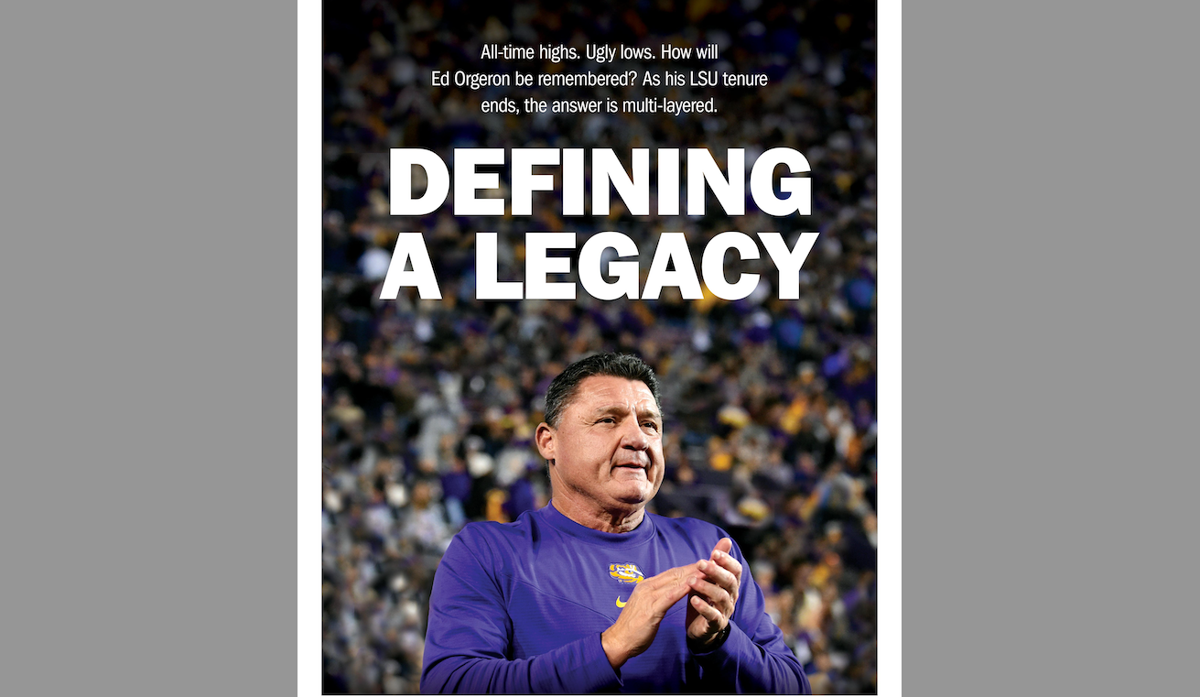 Ed Orgeron will serve as LSU's coach in Tiger Stadium for the last time Saturday night. 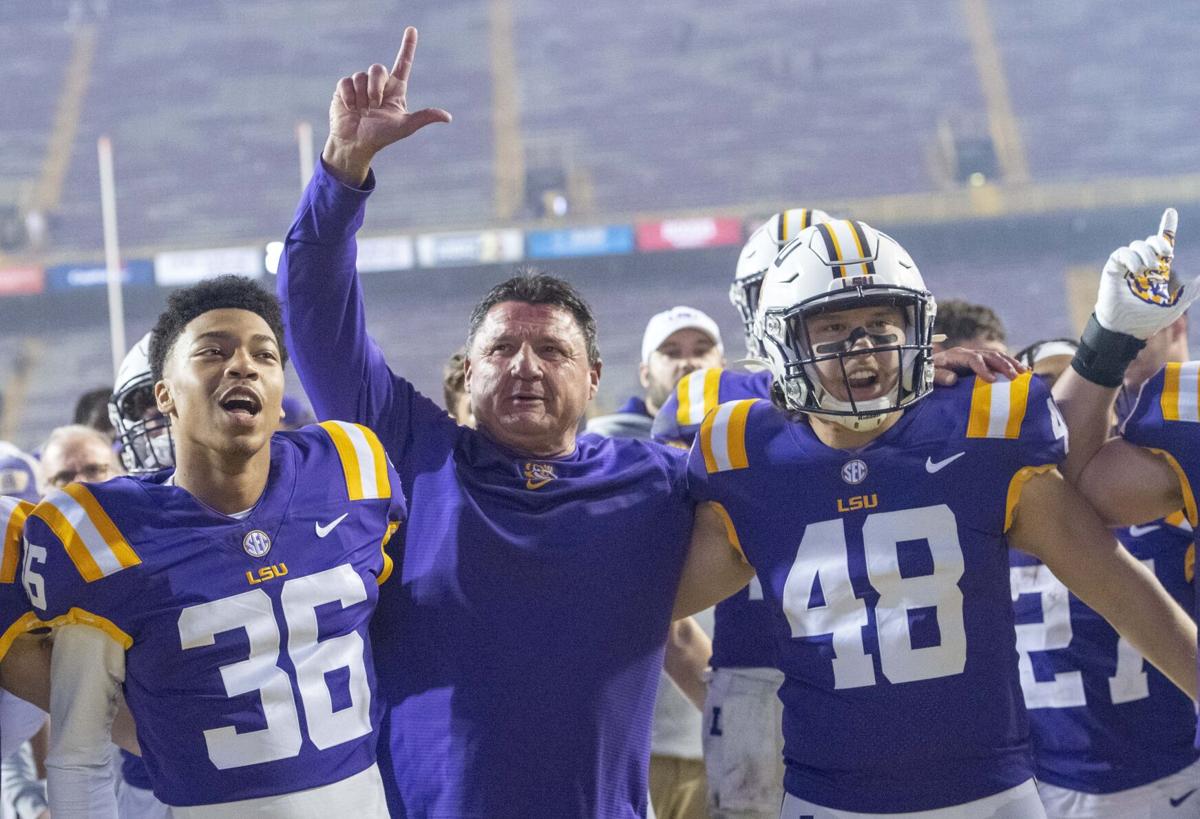 Ed Orgeron will serve as LSU's coach in Tiger Stadium for the last time Saturday night.

Glen Logan can still remember the voice over the phone. Logan often heard the gravelly, deep, instantly recognizable accent as a four-star recruit from Destrehan High School. He usually couldn’t decipher the words through the static, but over time, the pitch from Ed Orgeron solidified in his mind.

Orgeron, then LSU’s defensive line coach and recruiting coordinator in 2015, led Logan’s recruitment. Even though it seemed Logan wouldn’t go anywhere else as long as he had a scholarship offer, Orgeron never let up. He told Logan he would start for four years and win a national championship.

“I used to hate being on the phone with him because I never understood what he said,” Logan said. “But everything he said came true.”

During Logan’s six-year career, he has started 36 times and helped LSU win the 2019 national title, fulfilling Orgeron’s prediction. And as one of LSU’s longest-tenured players, he witnessed the rise and fall of Orgeron’s LSU career up close.

“Coach O, he's a fighter,” Logan said. “He's someone who has gone to battle for us every day. He's a man who's going to stay true to himself. He loves all of his players. He treated us like his sons.”

Not long after Orgeron recruited Logan, he became the interim coach four games into the 2016 season when LSU fired Les Miles. Orgeron led LSU to an undefeated season and the championship three years later. Then the program dramatically declined, leading to what is perhaps Orgeron’s final game Saturday night against No. 14 Texas A&M.

Though LSU could reach bowl eligibility with a win, Orgeron, 60, said earlier this week he would talk to the administration about whether he would participate in a postseason game as LSU transitions to a new coach.

If LSU loses — solidifying its first losing record since 1999 — or Orgeron doesn’t coach in the potential bowl game, his tenure will end with the regular-season finale inside Tiger Stadium, the place he used to dream of coaching in as a boy 50 years ago in Larose.

“I don't think it's going to hit me until the end, and I really don't think that way,” Orgeron said. “But I am appreciative of the time I had here. A lot of great days.”

Orgeron will leave behind six years of memories, both joyous and disappointing, from his time as LSU’s head coach. He re-energized the program when he took over as the interim and captivated fans with his relatable background. Though some remained skeptical, Orgeron, who can speak Cajun French, seemed to represent Louisiana.

“For the first time,” longtime fan Kent DeJean, better known as “Evil Twin,” said at Orgeron’s first radio show, “we don’t have a coach with an accent.”

“For the first time,” Orgeron said, “I’m someplace where they don’t think I have one.”

Orgeron changed the practice schedule, opened the offense and went 6-2 as the interim coach. When then-athletic director Joe Alleva called him in at the end of the 2016 regular season, Orgeron drove down Interstate 12 blaring “Born on the Bayou” from his home in Mandeville back to Baton Rouge. Alleva offered him the position full-time. Orgeron lifted him off the ground in a hug.

The Tigers struggled at the beginning of Orgeron’s first season, but a 24-21 home loss to Troy provided a turning point, Orgeron always said. LSU won six of its final eight games that year. Then Orgeron changed offensive coordinators and pursued quarterback Joe Burrow, who needed an opportunity when he transferred from Ohio State.

As Burrow established himself at quarterback in 2018, LSU upset No. 2 Georgia at home, a victory that made fans rush the field. The team reached the 10-win mark with a win over Central Florida in the Fiesta Bowl, and Orgeron hired passing game coordinator Joe Brady during the offseason, setting the stage for a championship run that electrified the state.

In 2019, LSU completed what was perhaps the greatest season in college football history. Burrow won the Heisman Trophy and, during a tearful, emotional acceptance speech, said LSU should give Orgeron a “lifetime contract.” Several organizations named Orgeron national coach of the year. A month later, he struggled to hold back tears at LSU’s championship parade.

“No one can ever negate the fact that he definitely in 2019 helped LSU secure the national championship,” said State Sen. Regina Barrow, D-Baton Rouge. “That was huge for us. That was a historic moment here in Baton Rouge.”

But the demise began soon after. Brady left for the Carolina Panthers. Defensive coordinator Dave Aranda left to become the head coach at Baylor. LSU had 13 players taken in the NFL draft, which set a record but also removed valuable experience and leadership from the roster.

Orgeron’s next hires fell flat — particularly defensive coordinator Bo Pelini, and he poorly handled the players’ social injustice protest before the 2020 season. The Tigers finished 5-5 with one of the worst defenses in school history.

As a Title IX scandal engulfed LSU last fall, Orgeron was accused of failing to properly report allegations of sexual assault by his players, which he denied. Orgeron wasn’t implicated in a law firm’s internal investigation, but 74-year-old Gloria Scott later testified to the Louisiana Senate select committee on women and children that Orgeron called her after she claimed former LSU running back Derrius Guice sexually harassed her in December 2017.

Orgeron denied speaking with Scott. He declined to testify in-person — along with other LSU officials — and instead submitted a written statement to the committee. Orgeron has since been added as a defendant in an amended Title IX lawsuit against LSU. He has denied all accusations.

Barrow, chairwoman of the senate select committee on women and children, wished Orgeron had spoken in-person.

“That was extremely disappointing in how he handled it and his responses initially and the mere fact that he didn't even come before the committee to answer our questions,” Barrow said. “What I will remember most about Coach O was how he handled that situation — or the lack thereof.”

In the end, though, Orgeron’s on-field results led to his firing midway through the 2021 season. He overhauled the coaching staff and hired first-time coordinators, and while the defense improved, the offense regressed as Orgeron tried to recreate Brady’s scheme with two of his former assistants.

The Tigers are 10-11 since winning the title.

The day after LSU lost to Kentucky, athletic director Scott Woodward began to discuss a change with Orgeron. He and the school reached a separation agreement Oct. 17, which paid Orgeron his full $16.9 million buyout. Orgeron joked that he could buy a lot of hamburgers.

Orgeron, who said he will take a year off from coaching, remembered daily operations, passing through the Tiger Walk before games, the 2019 season, landing recruits and competing in the upper echelon of college football as he reflected on his career. All he ever wanted to do was coach at LSU, and one of the championship plaques outside Tiger Stadium will forever hold his name.

Last week, “Evil Twin” made his final appearance at Orgeron’s radio show. He had to miss the final one because of the Thanksgiving holiday, so he said goodbye early. DeJean began by quoting poet Maya Angelou, who once said people will forget what you did and what you said, but “people will never forget how you made them feel.”

Orgeron made people feel an array of emotions as LSU’s coach, from joy during the 2019 national championship run to embarrassment the last two seasons and disgust associated with the Title IX scandal. He led LSU to the pinnacle of the sport, then the program dropped under his watch.

For DeJean, seeing a coach who talked like him and came from his state ultimately filled him with pride, no matter how Orgeron’s tenure ended.

“Coach, you know, I have a Cajun accent just like you,” DeJean said. “When I was growing up, people made fun of me. They joked and they laughed at me — like most people from our culture — and they did the same to you.

Fans clapped in the background.

“From all of the people of LSU, I want to say — and from all the people with accents like mine — I want to thank you,” DeJean said, “for how you made us feel.”

LSU vs. Texas A&M: Our staff makes its picks for the season finale against the Aggies

The Advocate's staff writers predict the outcome of LSU's game against No. 14 Texas A&M on Saturday night in Tiger Stadium.