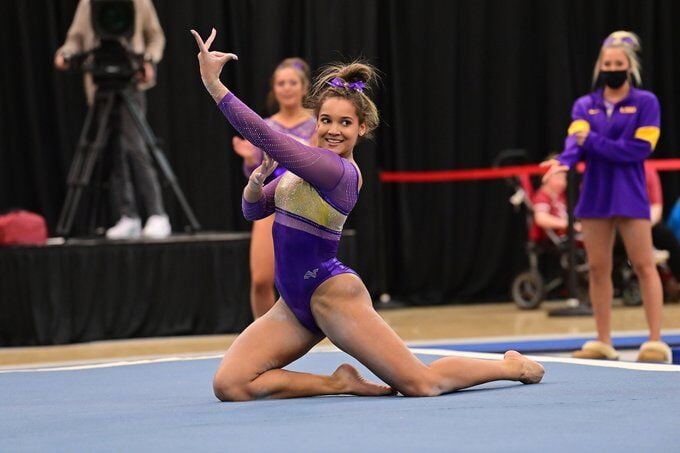 LSU freshman Haleigh Bryant competes on floor at Arkansas on Friday, Jan. 15, 2021 in Fayetteville. Bryant tied for first on floor with a 9.95 and won the all-around title with a 39.600. 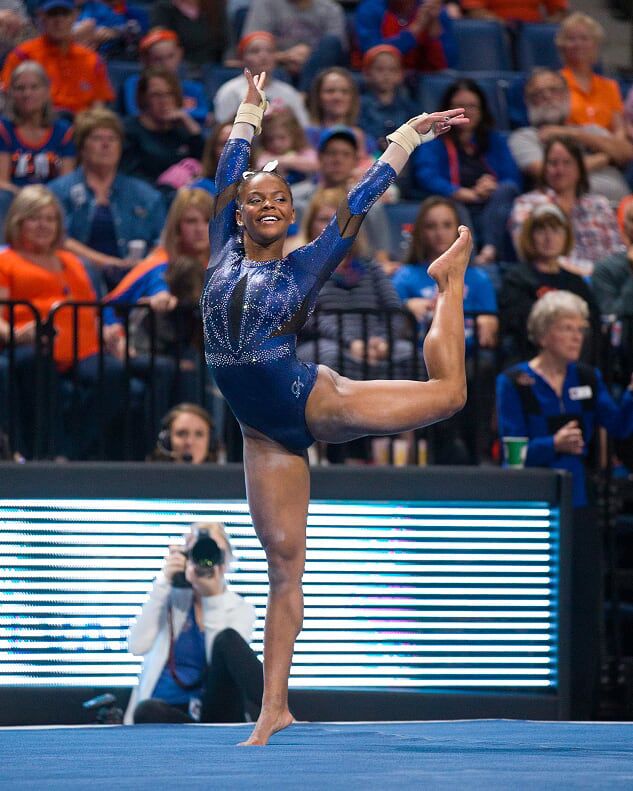 LSU freshman Haleigh Bryant competes on floor at Arkansas on Friday, Jan. 15, 2021 in Fayetteville. Bryant tied for first on floor with a 9.95 and won the all-around title with a 39.600.

The overarching message for LSU’s gymnasts is always the same: It isn’t only the team they are competing with on the floor that night, but the whole country.

Friday night, though, the lines of competition are a little more sharply defined.

The No. 2-ranked Tigers host No. 1 Florida in the Pete Maravich Assembly Center in the biggest dual meet of the collegiate season. The action begins at 6:30 p.m. and will be televised on the SEC Network.

Despite the “us against the country” mantra, LSU coach Jay Clark knows the feeling of this one is something different.

“We’re not tone deaf to it,” Clark said. “We know it’s No. 1 versus No. 2 and all the excitement that goes along with that.”

That anticipation is evident in both camps.

“Payton came up to me and said, ‘Jenny, I’m so ready for LSU,” Rowland said. “’I can’t wait. I’ve never competed there.’

“The energy is contagious. Everyone is focused, locked in and ready to have a great time on Friday.”

Despite the excitement, there are distinct differences between a 1-2 matchup in gymnastics compared to other sports.

The Tigers could edge out Florida and still be ranked No. 2. For a sport wedded to the subjectivity of meet judges, there is no poll of voters waiting to possibly boost the Tigers to the top.

“Other sports determine how you get to the postseason by wins and losses,” Clark said. “For us it’s determined by scoring average. It’s more similar to RPI than the won-loss record.”

At the same time, LSU could lose and still come away with its best score of the season and leave Clark pleased with his team’s progress.

In fact, he’s already getting that feeling after three straight plus-197 scores.

“Do I believe we’re one of the top two or three teams in the country?” Clark asked. “Yes, I do.

“I’m proud of this team. It’s like watching the stock market. It doesn’t mean there might not be a little dip, but you have to be in it for the long haul. If you’re an LSU gymnastics fan I say ‘buy,’ based on what I’ve seen.”

One area where the wins and losses do matter in in the chase for the SEC regular-season championship. The conference also has a championship meet in March, but started awarding a trophy in 2017 for the best regular season SEC win-loss record after years of lobbying by former LSU coach D-D Breaux.

Overall, it wouldn’t be shocking for LSU or Florida to win Friday night and the other to come out on top in the SEC meet or in the NCAA finals. These two teams have jockeyed back and forth with each other for SEC supremacy in recent years, with less than two-tenths of a point separating them in four of their last six meetings.

“They’ve probably got the most impressive roster on paper in the country,” Clark said. “We have a ton of respect for Jenny Rowland and her coaches. They do a great job over there. We’re very familiar with them and they are with us. If all goes well, it’ll be a great meet.”

A meet that will feature some of the nation’s top gymnasts.

Florida’s Megan Skaggs is the nation’s third-ranked all-arounder with a 39.550 season average, just ahead of LSU freshman Haleigh Bryant (39.542) and sophomore Alyona Shchennikova (39.525), who competed as an all-arounder for the first time at Auburn.

LSU sophomore Kiya Johnson is still the only gymnast in the country with a perfect 10 on floor, but she won’t be competing in her specialty this week because of ankle and Achilles’ tendon issues. Clark said he wouldn’t risk losing Johnson for the postseason by putting her in the all-around this week, but will allow her to compete on vault, uneven bars and balance beam.

Meanwhile, Florida’s Nya Reed has the nation’s third-best season average (9.938) on floor, followed closely by Bryant (9.925). Overall, LSU is No. 1 nationally on the event.

Again, the margins are so small between the teams. Though the crowd in the PMAC will be only a quarter of what it usually is because of coronavirus restrictions, the atmosphere could push LSU to its best effort.

LSU softball returned to action Thursday for the first time since March 10, 2020.