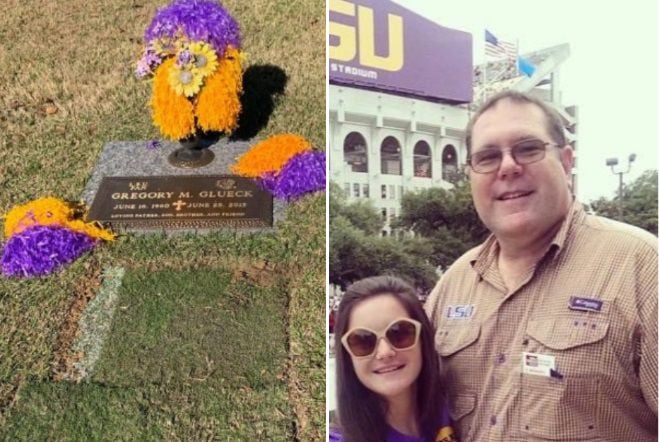 Catherine Glueck took advantage of LSU giving away Tiger Stadium turf by picking up a few pieces and having them planted at her father's grave site. 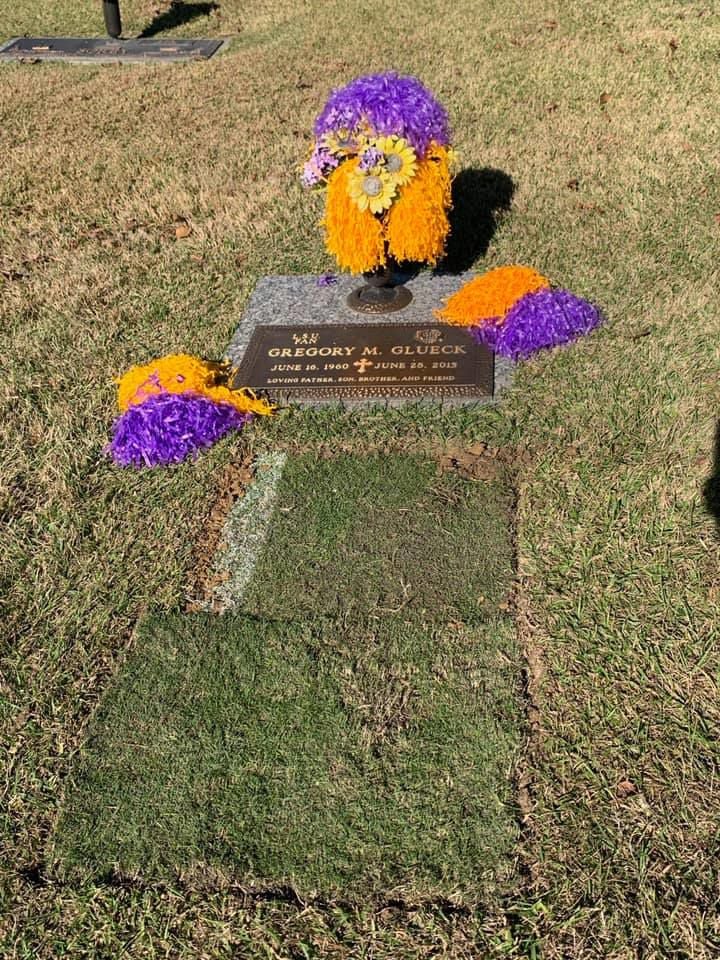 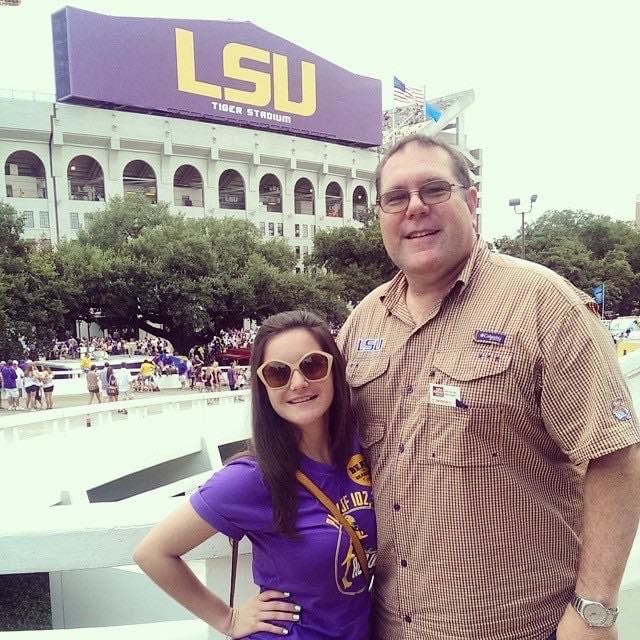 Gregory and Catherine Glueck stand in front of Tiger Stadium before a football game. 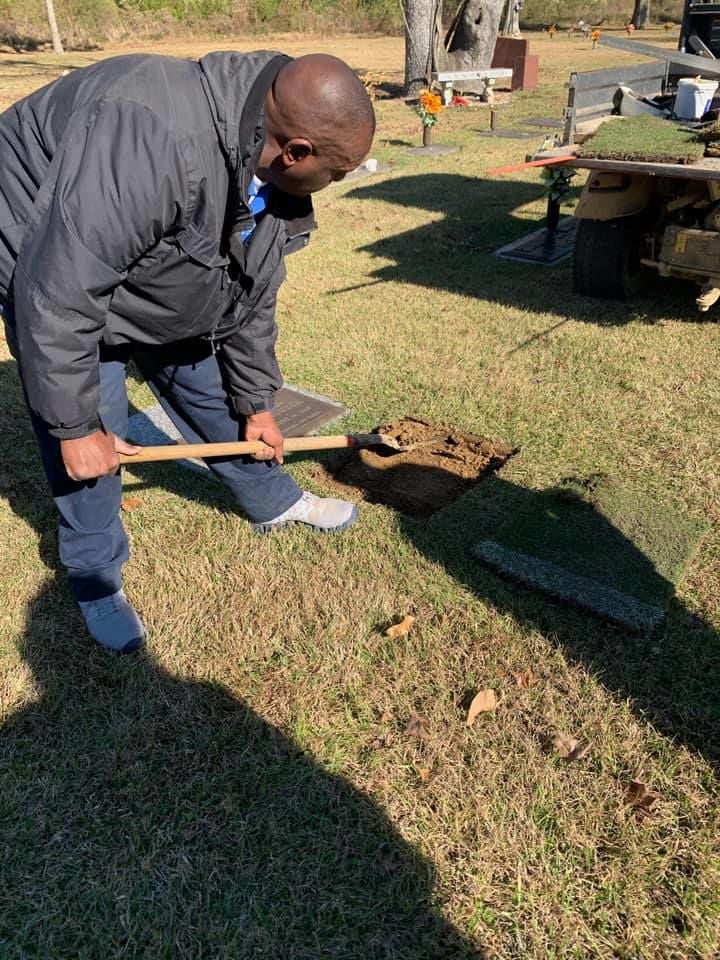 A groundskeeper for the burial site digs out a space for Tiger Stadium sod to be placed. 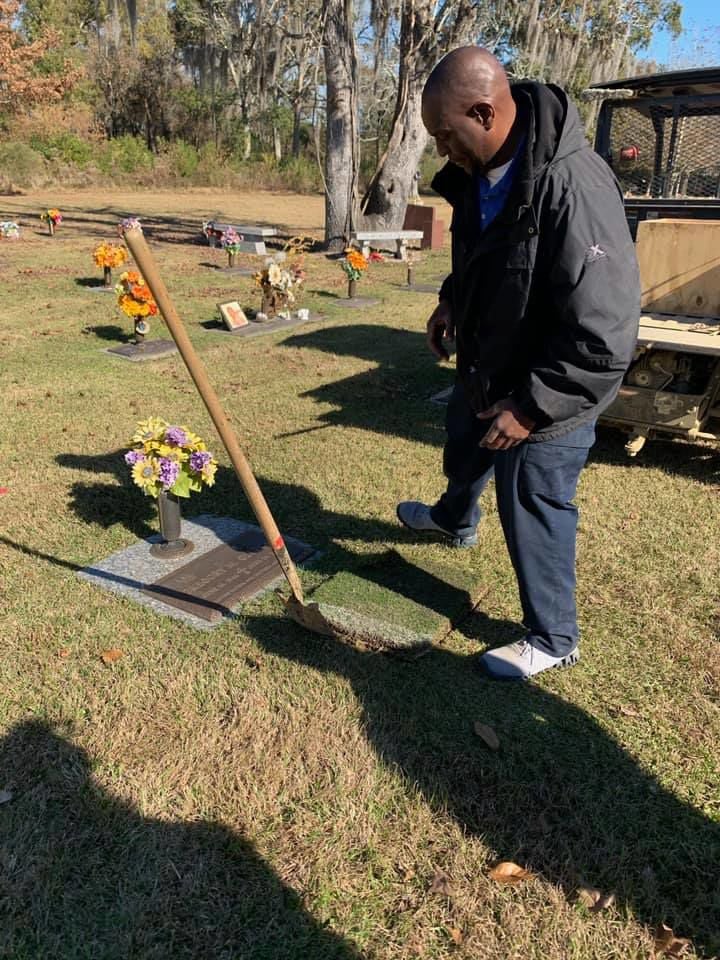 A groundskeeper at the burial site places the Tiger Stadium grass at the grave of Gregory Glueck. 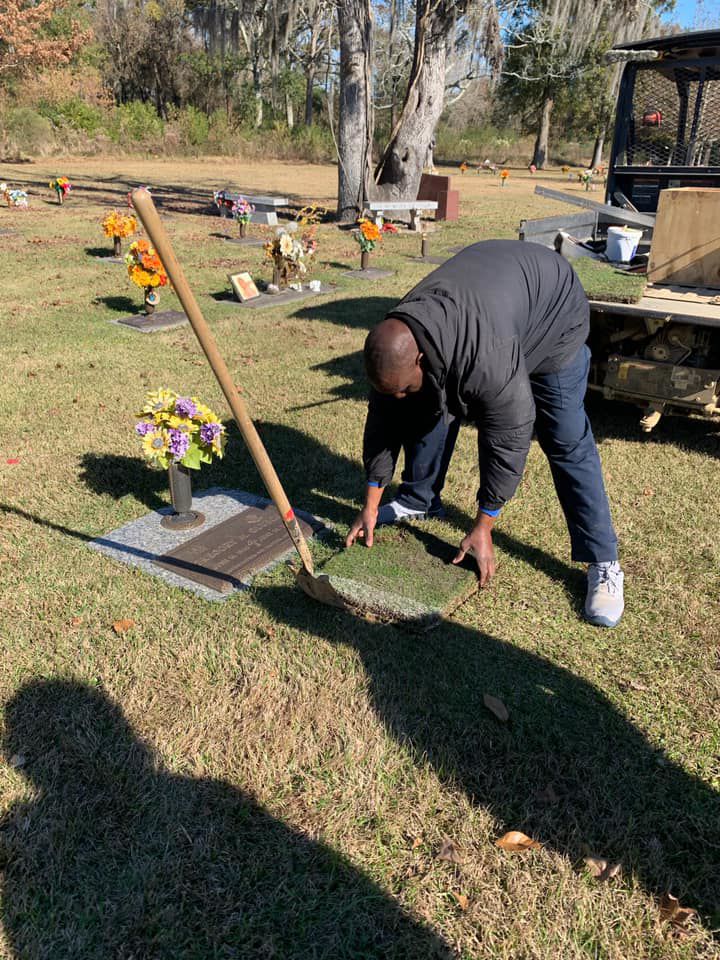 A groundskeeper at the burial site lowers the Tiger Stadium grass into the grave of LSU fan Gregory Glueck.

Catherine Glueck took advantage of LSU giving away Tiger Stadium turf by picking up a few pieces and having them planted at her father's grave site.

Gregory and Catherine Glueck stand in front of Tiger Stadium before a football game.

A groundskeeper for the burial site digs out a space for Tiger Stadium sod to be placed.

A groundskeeper at the burial site places the Tiger Stadium grass at the grave of Gregory Glueck.

A groundskeeper at the burial site lowers the Tiger Stadium grass into the grave of LSU fan Gregory Glueck.

When the announcement was made that LSU would be giving away sections of Tiger Stadium turf, fans took to Facebook to brainstorm what they would do with the hallowed sod.

"Ship it to Nick Saban," one user wrote.

In his own words: Why does LSU's Les Miles eat grass? Well, it all started in right field ...

As Les Miles enjoyed LSU’s top five 2016 recruiting class on Wednesday, he took time out in a CBS Sports interview to explain one of his most-…

"Build a wooden box, place a strip of sod in it, paint a mini tiger field with logo on the strip and use it as a coaster during game days," described one fan.

The difference between those folks and Catherine Glueck, 28, is that she actually followed through on her promise.

After receiving her sod from Tiger Stadium, Glueck used it to blanket the Resthaven grave of her father, Gregory, a die-hard Tiger fan.

"Now you can rest under Tiger Stadium until the end of time," she wrote on Facebook.

It wasn't until LSU tweeted out its sod giveaway that Catherine Glueck was inspired to posthumously pay tribute to her father's fandom. She saw posts about how people would use the grass if they got it, and after seeing someone post about honoring a deceased parent with it, she felt driven to do the same.

Catherine Glueck said she arrived Monday afternoon with her mother, and the bullpen lot of Alex Box Stadium was already packed. She called the funeral home about the arrangement, and it agreed to place the grass on the grave.

Gregory Glueck was involved with LSU for almost his entire life before he died in 2015 due to heart complications. He was 55.

As a child and Eagle Scout, Catherine Glueck said her father got his start with LSU football by ushering in the team as it prepped before home games in the late 1960s to early 1970s.

He later spent seven years in undergraduate school at the university, trying to decide a major and also working as a trainer for the university's gymnastics and wrestling teams.

He continued to support LSU football as he entered the construction industry for his career. He purchased two season tickets every year -- one for him and one for his daughters.

"I love [our memories]," daughter Catherine said in an interview with The Advocate. "It doesn't make me sad to think about, it only makes me happy."

The Glueck family was never much for tailgating. But every game day, the family made a tradition of watching the band march down Victory Hill. It was never late to the stadium, either, and its attendance records for home games was almost perfect because of Gregory Glueck's dedication.

A few years ago Gregory Glueck even got on the field to take a picture with former LSU quarterback Zach Mettenberger. The photo -- with Mettenberger's autograph -- hangs in Catherine Glueck's home today.

It's not just any grass -- it's Tiger Stadium grass! Photos: Fans line up for chunks of sod

With the LSU football team's home games done for the season, the athletic department offered up "a piece of Tiger Stadium history" for fans.

Now, Gregory Glueck will keep a piece of one of LSU's greatest seasons with him forever -- a piece with a yard-marker line, no less.

"My mom keeps saying it's the 50-yard line," Catherine Glueck laughed, "but I always say, 'No, I'm not sure about that.'"

Regardless of what yard the line is, Catherine Glueck knows her father would be filled with joy to know that his family gave him this gift.

"He was everything LSU," she said. "He would be so excited to be buried under the turf where LSU went 12-0 for a perfect season.

"If Joe Burrow wins the Heisman, he would be so happy by the fact that he's buried under Heisman turf."

Tiger Stadium grass finds new home at governor's mansion; 'this is going to be ... hallowed ground'

Governor John Bel Edwards may have a green thumb, but now it's clear that he has a purple and gold thumb, too.