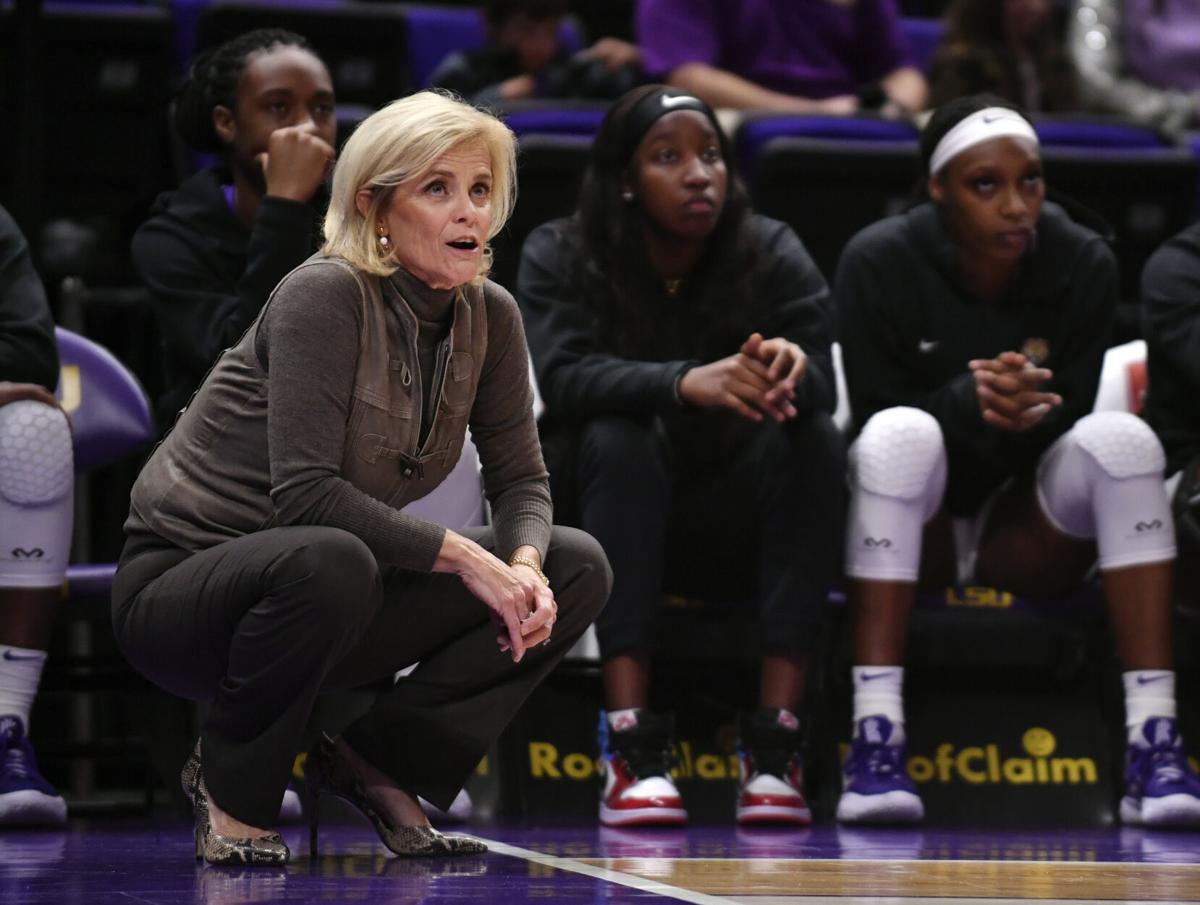 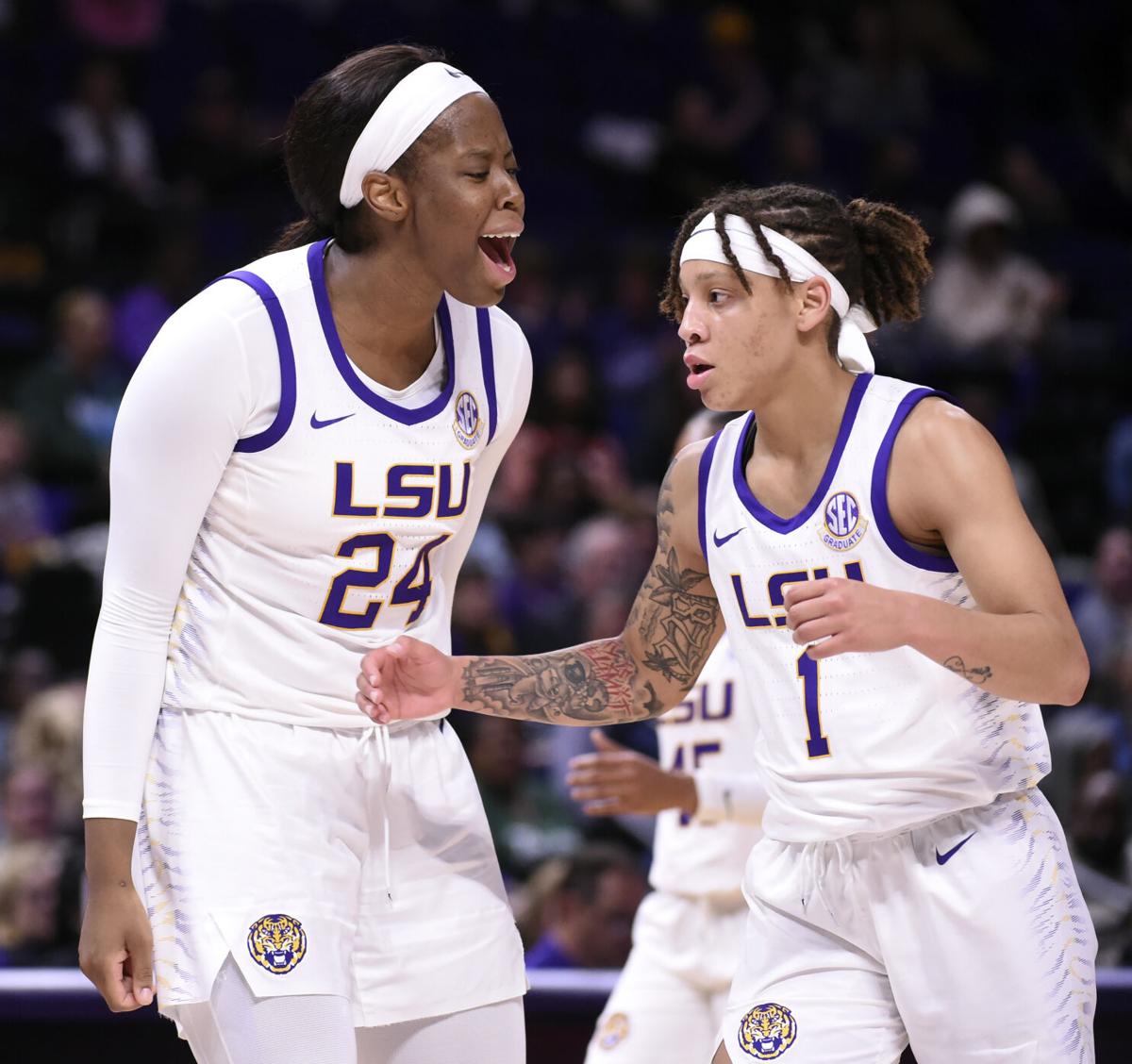 LSU center Faustine Aifuwa (24) celebrates with LSU guard Jailin Cherry (1) at halftime against Tulane, Tuesday, November 23, 2021, at the PMAC, on the campus of LSU in Baton Rouge, La.

LSU center Faustine Aifuwa (24) celebrates with LSU guard Jailin Cherry (1) at halftime against Tulane, Tuesday, November 23, 2021, at the PMAC, on the campus of LSU in Baton Rouge, La.

Not even 12 hours after playing their best game of the Kim Mulkey era, the LSU women’s basketball team is leaving town for a Thanksgiving “business trip.”

Mulkey reminded her players after Tuesday’s 75-58 victory against Tulane that while there would be time for the beach, the objective is to win two basketball games.

“I want them to understand it’s a business trip first, but we’re going to have fun,” Mulkey said. “Three-fourths of the team hasn’t been there. Why not go there and let them put their bikinis on and enjoy the waves, do what they want to do? They need to understand we want to go there and win two basketball games. We’ve got to do a quick turnaround there.”

It’s not a bad reward for a team that shot up 58 spots to No. 29 in the RealtimeRPI.com rankings with Tuesday's victory. But Missouri State, a perennial powerhouse among mid majors, is ranked No. 6 in the same poll. New Mexico State comes in at No. 203.

Four games into the Kim Mulkey era, the promise of better times ahead came into clearer focus as LSU scored a 75-58 victory against an experie…

“When you look at mid-major type programs, Mizzou State is always one of the top ones,” Mulkey said. “They’re very good, like Florida Gulf Coast. True women’s college basketball fans know they can beat you. Mizzou is one of the top 3-4 mid-majors every year.”

New Mexico State has balanced scoring in its four-guard lineup, led by 6-3 forward Bigue Sarr, averaging 12.3 points and 7.0 rebounds. Three other players average at least 11 points per game. Coach Brooke Atkinson is in her 11th season and her teams have four NCAA tournament appearances since 2015.

LSU is coming off a strong offensive performance against a solid Tulane team. The Tigers shot 47.8%, including 58.8 in the second quarter when they took the lead for good with a 15-0 run. Defensively, LSU forced 17 turnovers and Tulane shot 31.8 from the field.

Faustine Aifuwa had season highs of 17 points, eight rebounds and three blocks, but Mulkey was happier that she had five players in double figures. Khyala Pointer had 14 points and six assists and Autumn Newby was one rebound short of a double-double.

“Our defense was solid,” Mulkey said. “We didn’t expose ourselves too much. That kept us in the lead. When you execute like we didn’t do the last time we played here, you become confident.

“If you have five kids confident when shooting the basketball and they like to spread the wealth, we’ll take that. Sometimes somebody is having an off night, and they have to do other things. Defend for you, rebound for you. Don’t allow any individual to gauge how they play because of what they do on the offensive end. Gauge them on consistency. When they stop shooting, I’ll take them out.”

After his team’s fifth consecutive win to start the season Monday night, Will Wade was his usual candid self.